But Microsoft could still go further.

The Surface Studio made all-in-one PCs cool again. Now with the Surface Studio 2, Microsoft is making it something even more compelling for creative professionals. The original Studio showed there was still the potential for innovation beyond iMac-like desktops -- thanks to its hinge, all it took was a push on the top of the display to lay the whole screen down like a drafting table. By doing that, the Studio became a giant easel, the sort of thing that would be ideal for digital artists. But despite being so innovative, Microsoft saddled that first machine with an aging CPU and slow graphics.

This time around, the company is fixing most of those issues, with newer CPU options, faster storage, and most important, significantly beefier NVIDIA 10-series graphics. The only downside, once again, is that you'll have to pay a steep price for a machine you can't upgrade down the line.

It's clear that this is an iterative update for Microsoft. The Surface Studio 2 looks exactly the same as the original, with a gray magnesium case; a gorgeous, thin, 28-inch display; and mirror-finish metal arms connecting the two. It's a design that's both striking and simple -- it still looks attractive two years later. I'm a tad disappointed Microsoft isn't offering the black cases it brought over to the recent Surface PCs, though.

Under the hood, it's a different story entirely. With the choice of NVIDIA GTX 1060 or 1070 graphics, you'll actually be able to play some modern games like Forza Horizon 4. Our review unit included the GTX 1070 GPU, which achieved frame rates between 90 and 150FPS in 1,440p with all of the graphics settings maxed out in that racing title. 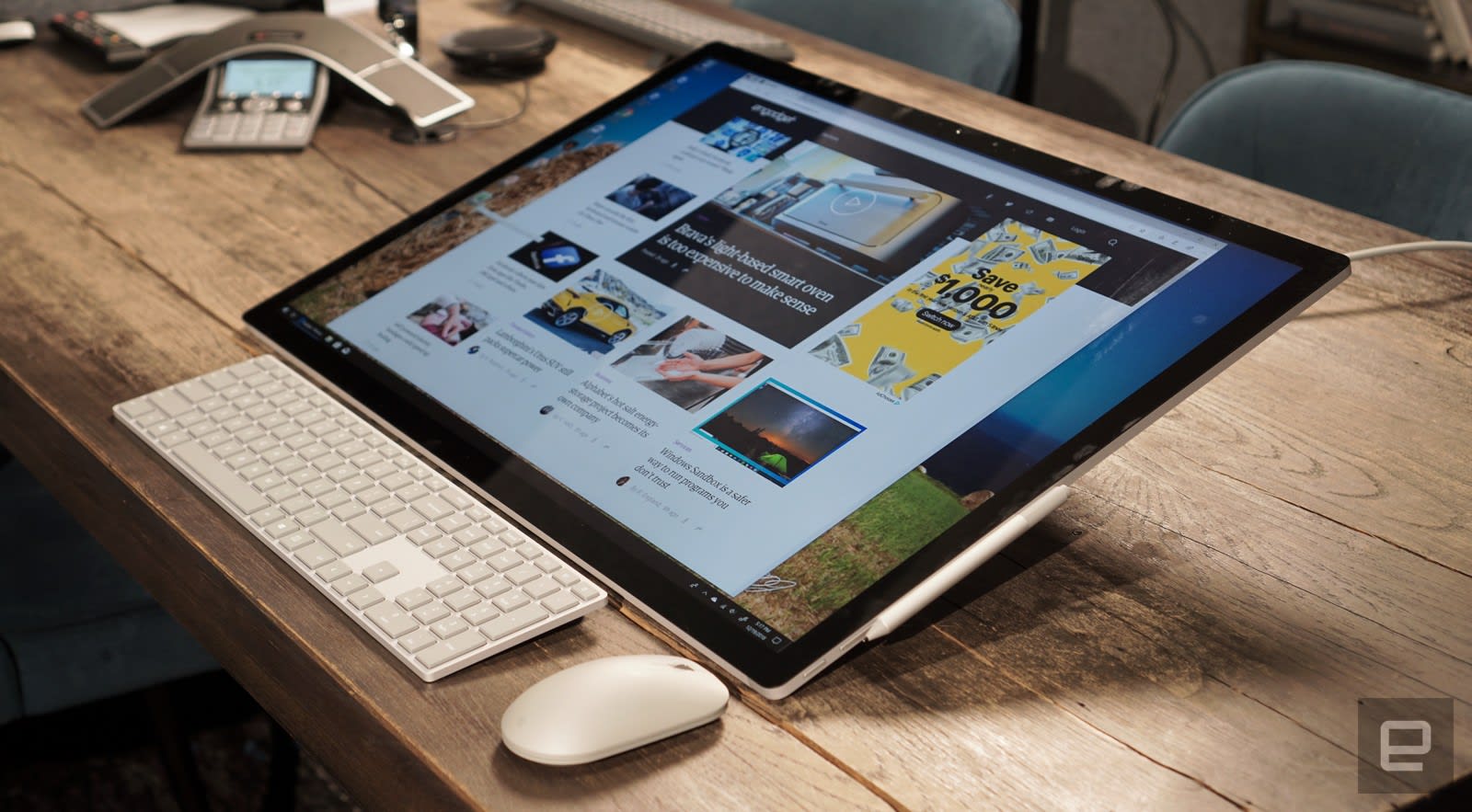 While it's faster than the GTX 980M graphics in the first Studio, the new model still isn't powerful enough to play many games at the display's full 4,500-by-3,000 pixel resolution (that's even tougher to handle than 4K) -- at least, not if you want to reach a smooth 60 FPS. Forza Horizon 4 reached around 32 FPS at that insane resolution, which could be decent for some gamers, but it simply looked too sluggish for me. But I'll always value higher frame rates over more pixels on the screen.

Nobody will be buying one as a gaming rig, but it would have been nice to see Microsoft cram in the more powerful GTX 1080 GPU. Even better, a Thunderbolt 3 port would have been a huge addition, because it would have let you use external GPU docks to bump up its graphics capabilities even more.

The machine's CPU upgrade is a similar story — now it includes the seventh-generation Core i7 7820HQ, which is better at handling 4K video than the sixth-generation processor from its predecessor. But once again, the Studio is a step behind everyone else. Intel's eighth-generation CPUs have been out for over a year — it's confusing that Microsoft didn't use one of those instead. 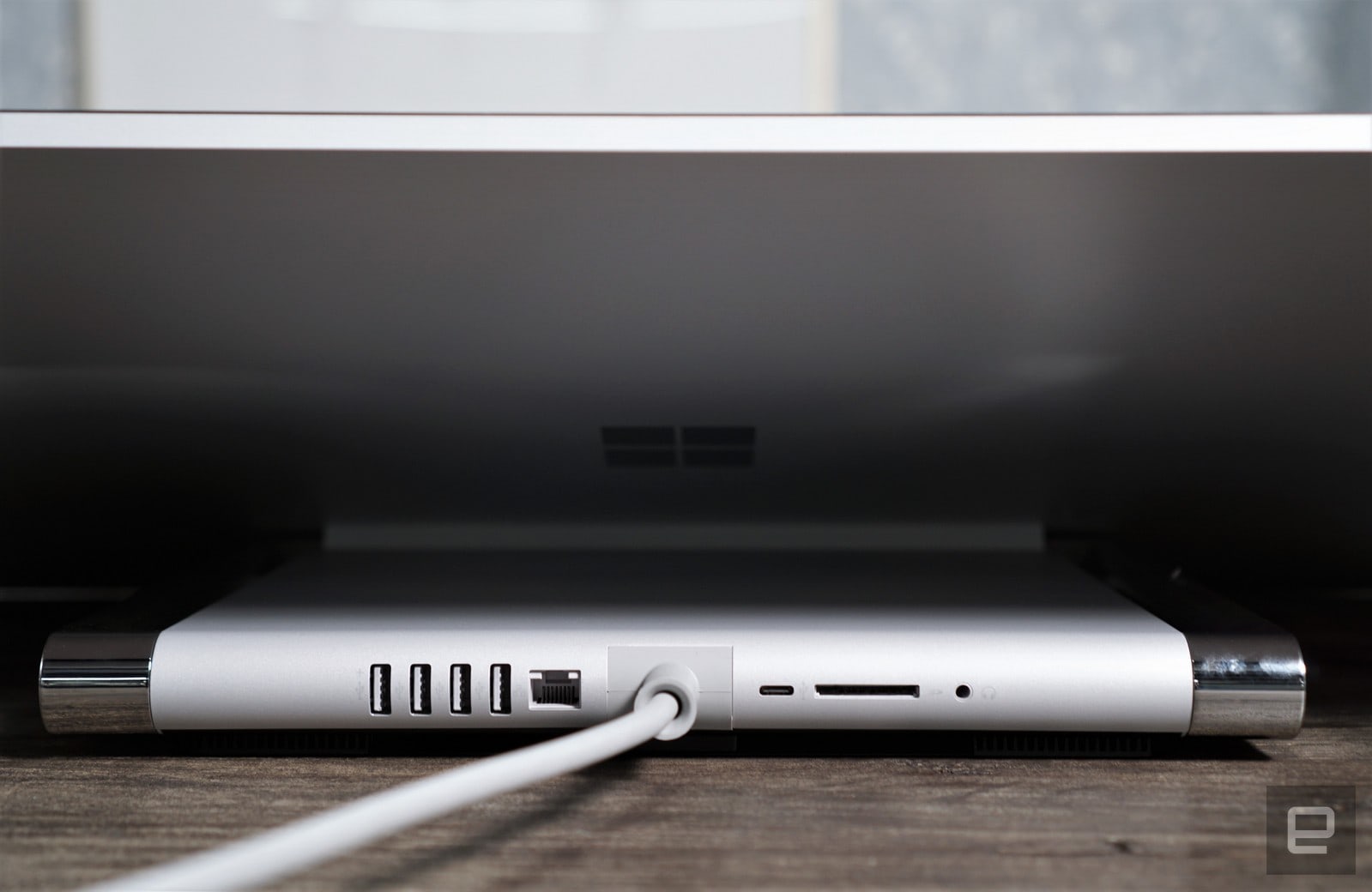 Clearly, this is a machine made for productivity. And it has all of the ports you'd need to get some serious work done. There are four USB 3.0 ports (including one high-power), an SD card reader, USB-C, gigabit ethernet and, of course, a headphone jack.

The Surface Pen is bundled in the box, and it remains one of the best digital styluses around. It's comfortable, feels great when writing on the screen and when you're not using it, it sticks to the side of the screen magnetically. Microsoft isn't promoting the $100 Surface Dial as much this time around, but it's still available and is useful for anyone working in supported apps like OneNote and AutoDesk Sketchbook. I didn't have one to test this time, but with the last model, I was impressed with the potential for its off-hand controls, because you could tweak settings without dropping the stylus. 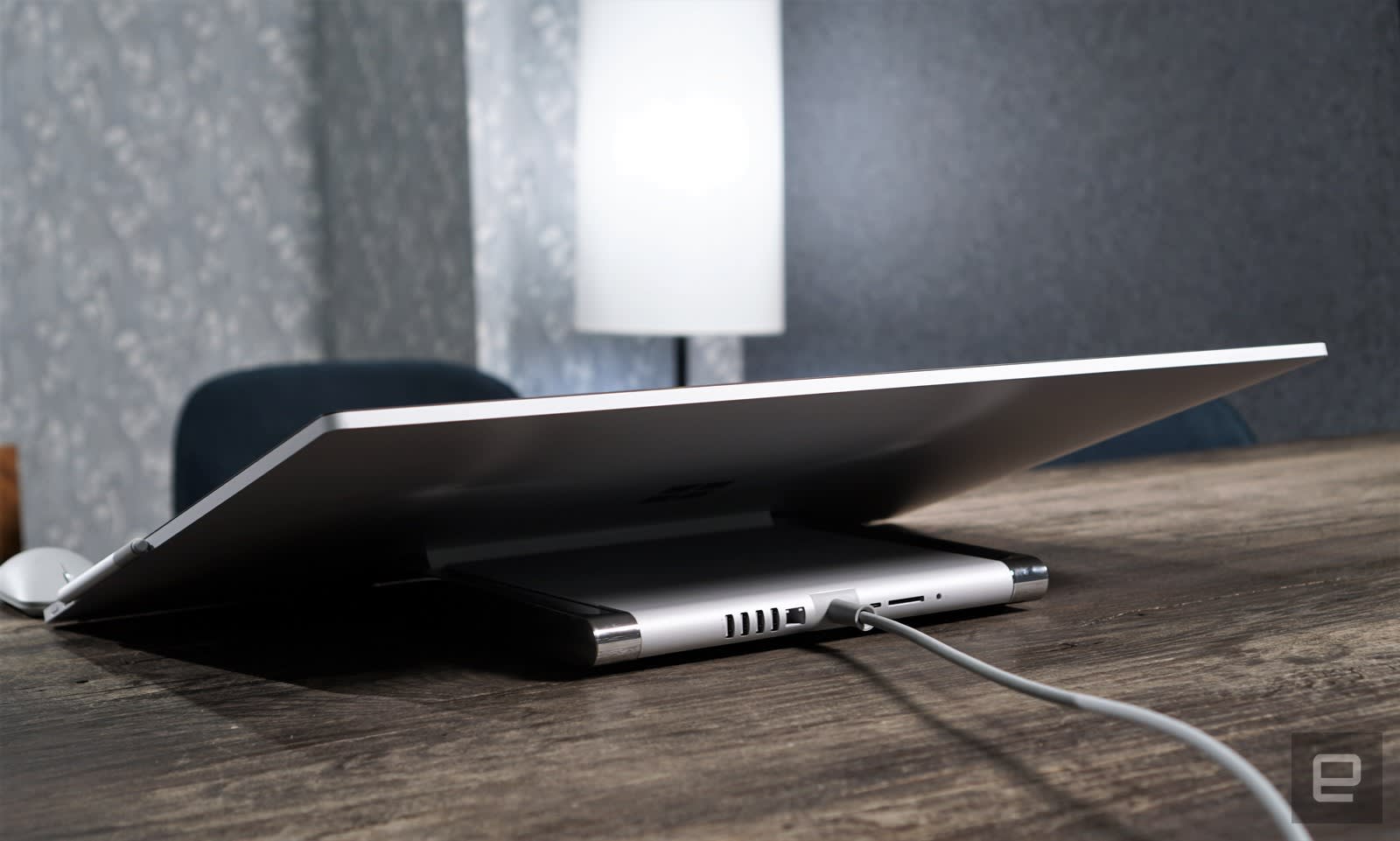 Outside of the spec bumps, using the Surface Studio 2 is pretty much the same as before. Its screen is a sight to behold, with plenty of brightness and glorious color reproduction. And I still really like its 3:2 aspect ratio, which gives you more vertical workspace than a typical widescreen display. These days I'm spoiled by my ultrawide monitor at home, but I was able to be just as productive on the Studio 2.

It's a great display for watching video, but I can imagine media editors and really anyone working with huge timelines and complex apps will appreciate the massive amount of real estate. I'll admit, I'm not really the target audience for device's easel orientation, which is what Microsoft calls it when you push the screen all the way down.

Still, I found it incredibly immersive while drawing or jotting down notes. And even though it's more suited to artists, it really opens up new ways for people to use a large all-in-one PC. It's something a teacher could set up at the front of a classroom to annotate documents and lead a lesson without losing sight of his students. That flexibility is key, and it's something no other all-in-one PC can easily do. Honestly, you'd have trouble doing that with a standard PC monitor too. 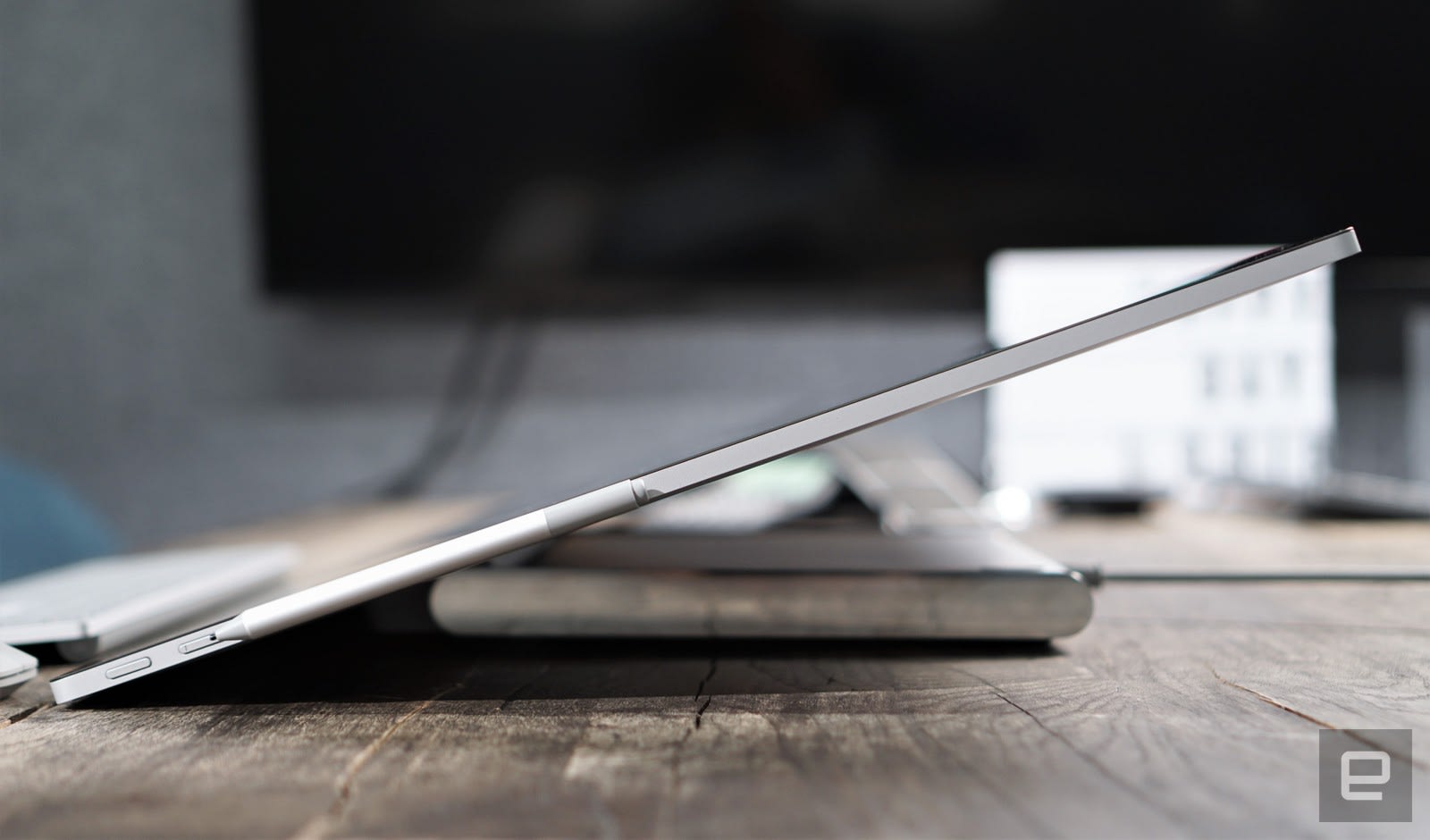 Even though it didn't get all of the upgrades we wanted, the Surface Studio 2 is still noticeably faster than before. It scored more than 1,000 points higher in the PC Mark 8 benchmark, and it was twice as fast in the 3D Mark Sky Diver test.

Microsoft also wisely moved beyond a slow hybrid hard drive, now you can choose from either a 1TB or 2TB SSD. While the last machine had read and write speeds of around 300 MB/s, the Studio 2's SSD writes data more than three times faster, and its read speeds are 10 times better. That makes it much better at tasks that involve writing a lot of large files.

Gamers aren't the only ones benefiting from all this new hardware. The Studio 2 is now better-suited to resource-intensive tasks like video editing and encoding, things that can take advantage of the extra GPU power and more robust storage.

Because the Surface Studio 2 is a completely self-contained machine with no potential for upgrade, it's particularly important that you get the fastest hardware you can from the beginning. 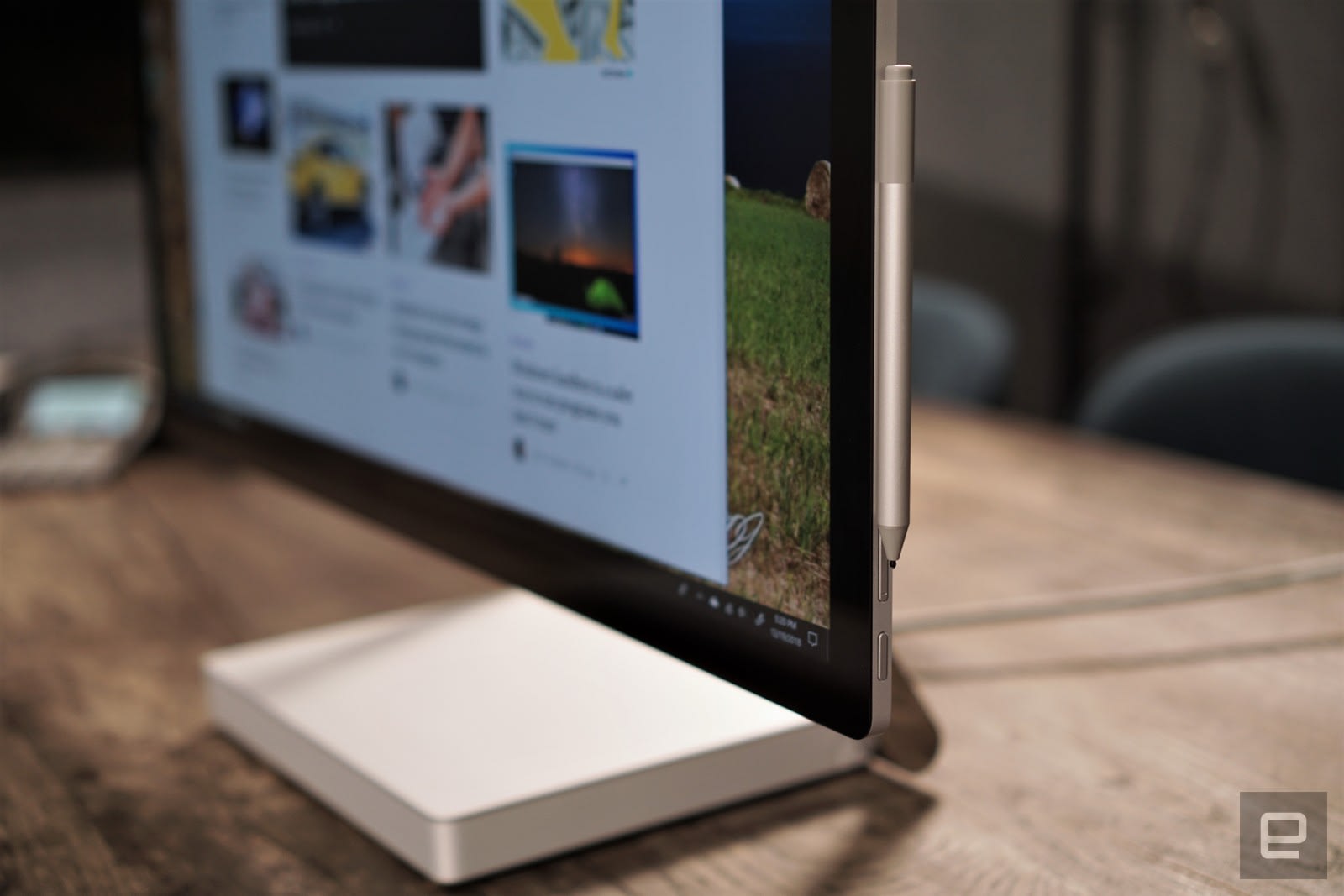 The Surface Studio 2 starts at $3,499, $500 more than before. If you want to upgrade to 32GB of RAM, you'll have to add another $700 (!). And if you're going all-out with a 2TB hard drive, be prepared to spend $4,799. Basically, Microsoft is trying to fill the gap between the affordable iMac and the pricey iMac Pro, which starts at $5,000. That machine includes a more powerful 8-core Xeon processor, but it has weaker graphics.

If you're intrigued by the idea of a powerful all-in-one but can't shell out that much cash, there's also Dell's XPS 27, which goes for $1,400 to start and $1,700 with a touchscreen. It'll still be a very capable machine for any creative professional. 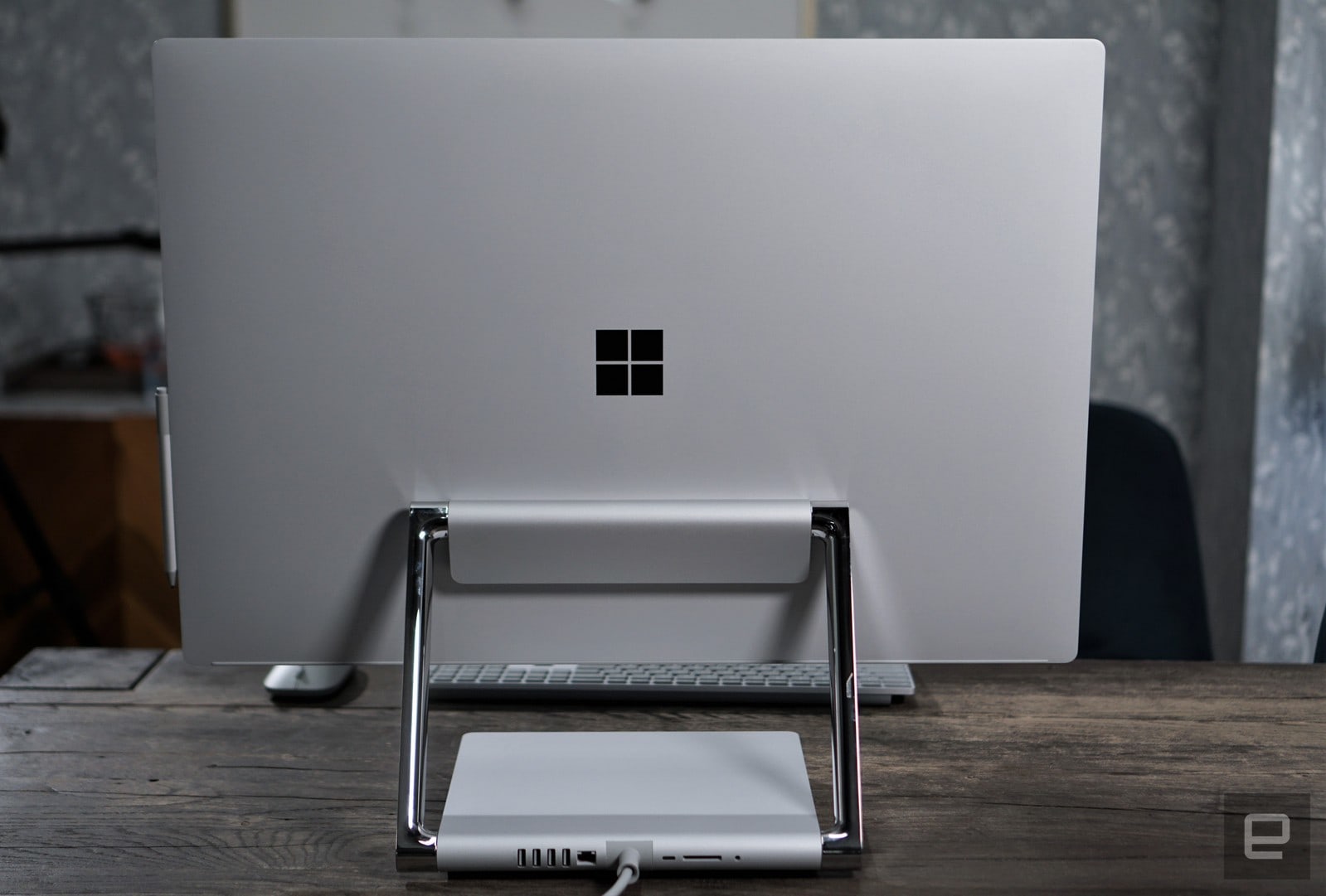 So is the Surface Studio 2 worth it? For a certain type of creative consumer, one who demands a flexible display and powerful hardware, it could be. But at the very least, it's an easier sell than before.