Headphone jack fans lost out to fullscreen smartphones in 2018

"So, dear audiophiles, it's time to move on."

Throughout 2016 and 2017, it was hard to fathom why Apple, Motorola and other smartphone makers were so eager to drop headphone jacks. There weren't any huge leaps in battery life or other features to make it worth losing the most widely supported port ever made. When Google removed it from the Pixel 2 last year, I figured all was lost. Even OnePlus, perhaps the most geek-friendly brand out there, gave up on the headphone jack with the 6T this year. But now, it's at least clear why the entire industry is jumping on this bandwagon: everyone wants to make bezel-less all screen phones.

Just look at the Pixel 3 XL, OnePlus 6(T), and LGV40, which all launched this year. And even Apple made a more affordable all screen phone with the iPhone XR, after helping to kick off the trend with the iPhone X in 2017. Without the headphone jack, there's more room to cram in other hardware, and it also helps to bring screens all the way to the edges of phones.

Samsung, the biggest headphone jack holdout, excluded a 3.5mm port on the China-bound Galaxy A8s. While recent case leaks suggest that the upcoming Galaxy S10 will keep the jack, it's unclear how long Samsung can keep shoving it into their flagships. Few other companies have enough engineering resources to make room for a 3.5mm port while also trying to remove camera notches and screen bezels. Sorry headphone jack fans, there's no turning back now.

And to be clear, I'm saying this with heavy resignation. Even though I'm mostly using wireless headphones with my iPhone X (the Libratone Track+ and a variety of noise canceling cans), not a day goes by where I don't miss that little port. I feel a pang of regret every time I'm hanging out with friends and can't easily plug my phone into older speakers or an aging car's sound system. I have several 3.5mm to Lightning dongles, but, inevitably, they're never around when I need them. (It's truly upsetting that Apple isn't even including them with new iPhones.)

At least the rise of all-screen smartphones is something; at first we gained nothing by losing headphone jacks. Phil Schiller's infamous "courage" remark seemed like a glib response to dumping the port, but eventually Apple explained that it needed more room inside of the iPhone 7. Still, that phone kept the fat screen bezels from the iPhone 6S and didn't add any significant new features to justify losing the jack. Motorola, meanwhile, said it needed to dump the jack to make the Moto Z so thin. It was an attractive phone, but the trade off just wasn't worth it.

When Google's Pixel 2 arrived, a more useful reason for dumping the jack emerged. Google Product chief Mario Queiroz told TechCrunch that it was about "establishing a mechanical design path for the future." That's likely what Apple was doing with the iPhone 7, as well. "We want the display to go closer and closer to the edge," Queiroz said. "Our team said, 'if we're going to make the shift, let's make it sooner, rather than later.' Last year [2016] may have been too early. Now there are more phones on the market." 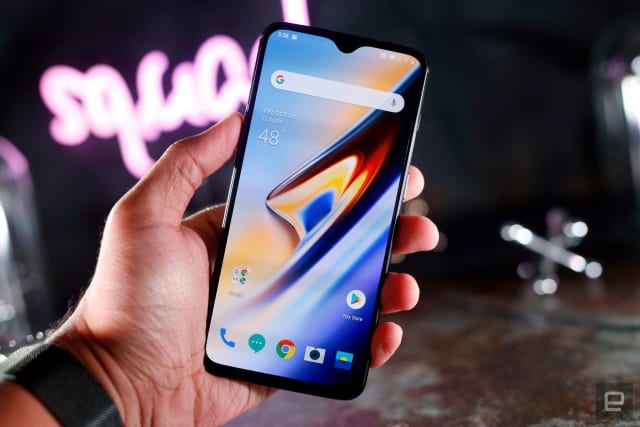 Similarly, OnePlus co-founder Carl Pei told TechRadar that removing the headphone jack gave them more room to add hardware in the 6T. It has a larger battery than the previous model, as well as a fingerprint sensor right under the screen. He also noted that 59 percent of their customers were already using wireless headphones this year, so the transition away from the port is less painful than it would have been a few years ago.

It might be hard for wired headphone fanatics to stomach the move losing the 3.5mm port just for prettier smartphones. But at least it's more palatable than it was a few years ago. One of the most glaring issues early on was that you couldn't listen to music with a USB-C or Lightning dongle while also charging your phone. Today, wireless charging is more ubiquitous, and some third-party accessories also let you charge and plug in a 3.5mm device. Bluetooth headphones have also come a long way, delivering better audio quality, reception and battery life than ever before. Surprisingly enough, after years of so-so wireless noise canceling headphones, Sony's WH-1000XM3 are currently my favorite headphones period.