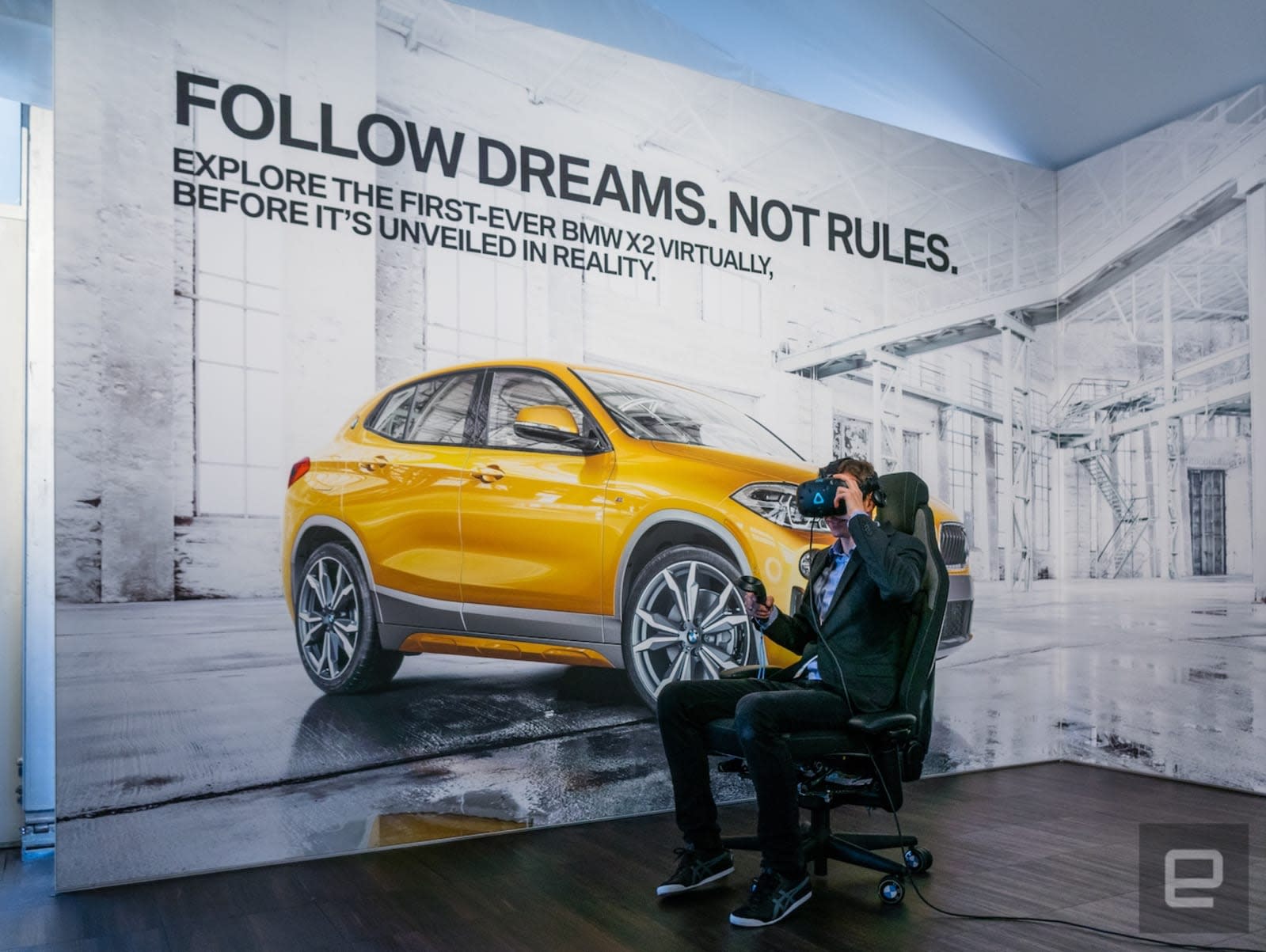 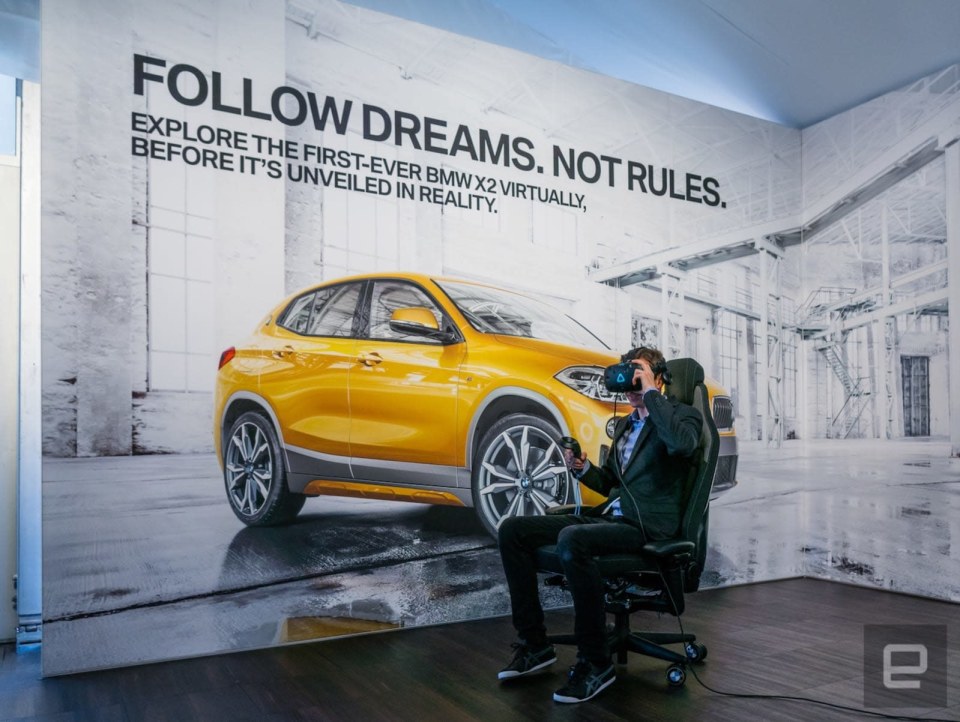 When you're in Las Vegas for CES and want to show off a brand-new car before its debut at the North American Auto Show, what do you do? Well, if you're BMW, you do it virtually. The German automaker "brought" its new X2 crossover SUV to the desert with virtual reality, in a first-of-its-kind (for BMW, at least) demo experience that lets potential customers get behind the wheel and poke around the vehicle's nooks and crannies. BMW sees this as a natural bridge between looking at pictures online and reading brochures, and for the automaker, the medium seems like a logical next step to updating the shopping experience for the future. In practice, it's a lot like the Forzavista mode, from Xbox racing series Forza Motorsport. Essentially, it's a showroom where you can walk around the car, kick its virtual tires and inspect it from every angle.

I sat in a desk chair with BMW-branded casters, but once I put an HTC Vive on, I was parked in the desert, sitting behind the X2's steering wheel. Using a Vive wand, I was able to peek inside the glove box, open the sunroof, fold the back seat down and open the doors. Looking around the cabin was plenty convincing, and if it weren't for the sound of screeching tires from BMW and GoPro's drifting demo outside the convention center, I could've forgotten that I wasn't actually sitting in the car. "A lot of people ask if they can do a test drive like this," Hefler said. "That's not the purpose."

There was another thing that broke the illusion, too. Like countless other people this week, when I tried to do something a little more instinctual and basic, I wasn't able to. "Everyone tries to touch the steering wheel," Hefler said. For him, that's validating, because it proves that the company's attention to detail wasn't wasted. "Everyone has the feeling that it's a real car," he continued. "We see that the illusion [of sitting in the vehicle] is there." 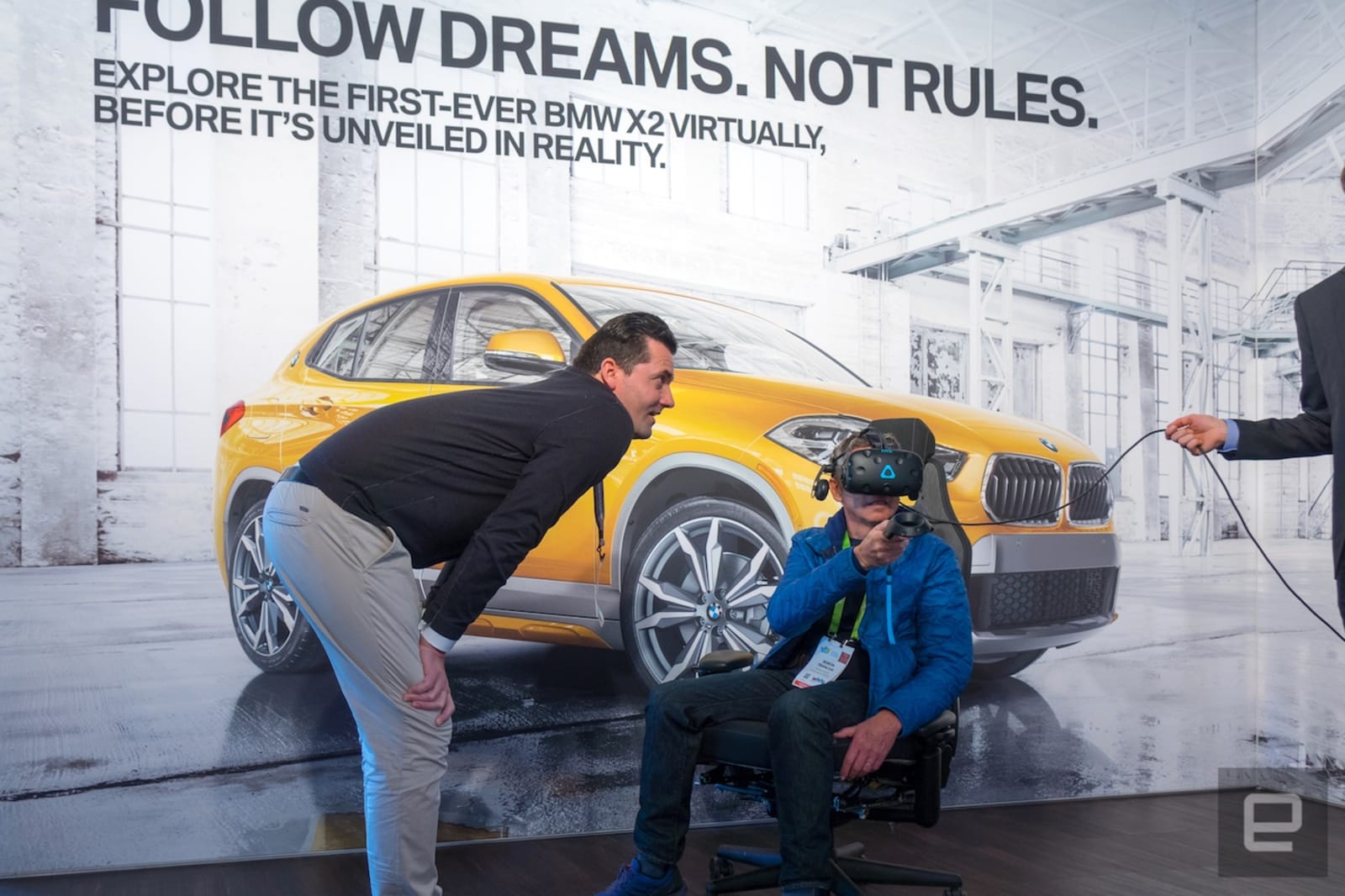 Maybe it's a little too realistic, though. When I reached up to open the sunroof, I crouched down a little because I felt like I was going to brush my head against the roof. Of course, I'm pushing 6'4", so that could be the case with the real vehicle too. And when I stood up to step out of the car, I reflexively ducked my head so I wouldn't hit it on the virtual doorframe.

From the outside, you can pop the trunk and change the car's color. When I pointed the Vive wand at the sky and pulled the trigger, I was able to change the time of day from midday to evening, which turned the X2's headlamps on.

Stepping onto any of the three markers on the ground outside the vehicle prompted the X2 to drive itself around and take a different pose. As it moved toward me, I instinctively sidestepped so its front bumper wouldn't knock into me -- can't say I've ever done that while playing Forza.

A home version might be coming in the future, but to ensure that people's first impression is a good one and that the demo has as much interactivity and detail as possible, this experience will live exclusively at dealerships.

At CES, you can't pop the hood for a peek at the engine compartment, and there are only a trio of color options to choose from, each married to its own interior color. Once the tech shows up at dealerships in the next few months, though, you'll be able to completely customize an X2 all the way down to its wheels. 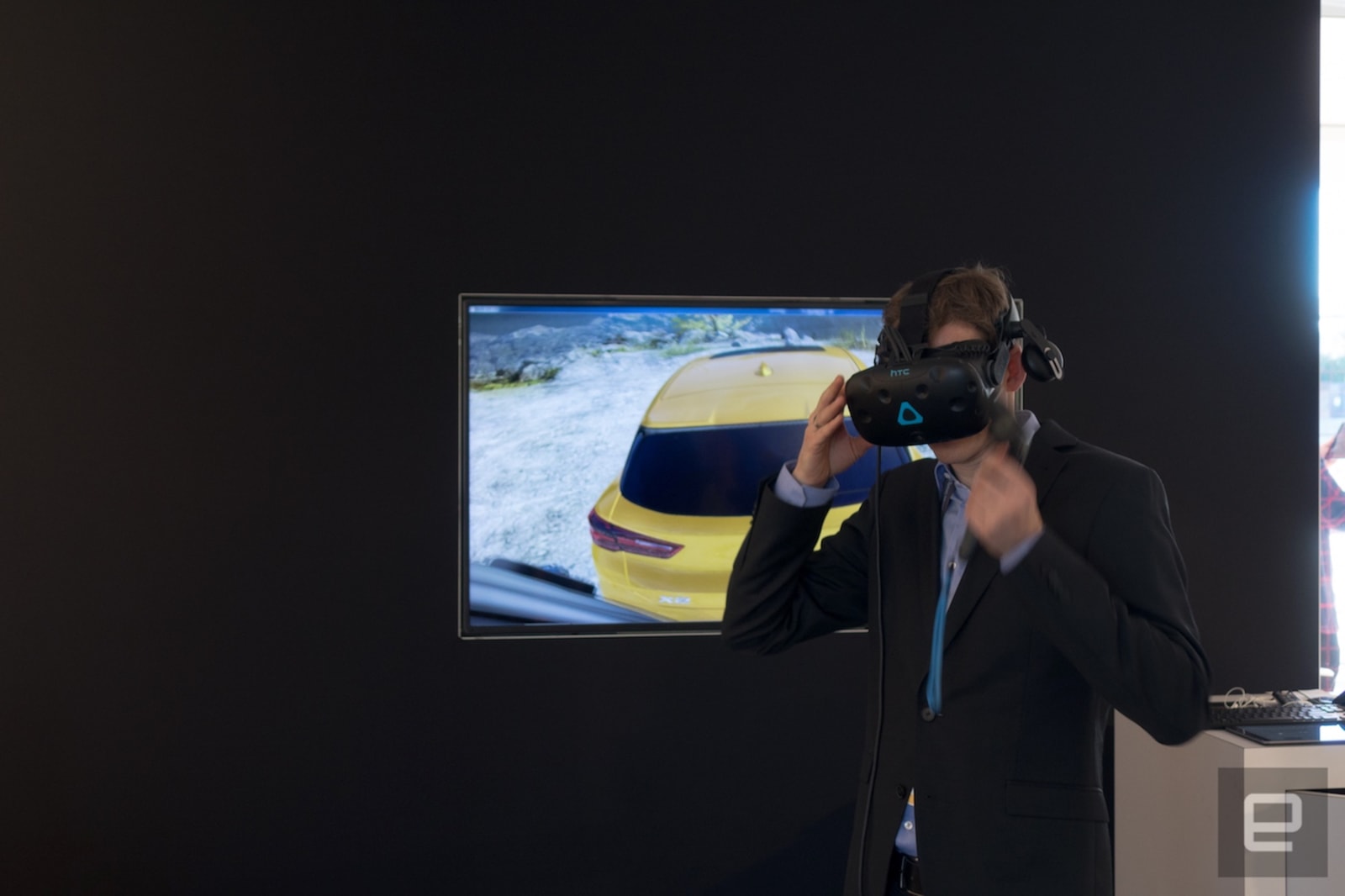 "Everything you can order, you can do in the virtual reality world," he promises. "What you can see, you can buy."

BMW has spent around a year on the experience, building it with the Unity game design toolkit and using high-res images and models from the design team to ensure a pixel-perfect re-creation. Hefler stressed that the automaker wanted to have a "big, huge, positive" impact on potential buyers.

That means that until the higher-res (and newly announced) Vive Pro and wireless adapter are available, the experience will require an umbilical. BMW tested current wireless headsets and found that latency was making people sick simply looking at a car in VR. "We took our time because we wanted to make the right thing for the customer... We want to be as perfect as possible," Hefler said.

In this article: automotive, bmw, bmwx2, ces, ces2018, gear, handson, htcvive, personal computing, personalcomputing, transportation, unity, unityengine, virtualreality, vive, vr, x2
All products recommended by Engadget are selected by our editorial team, independent of our parent company. Some of our stories include affiliate links. If you buy something through one of these links, we may earn an affiliate commission.