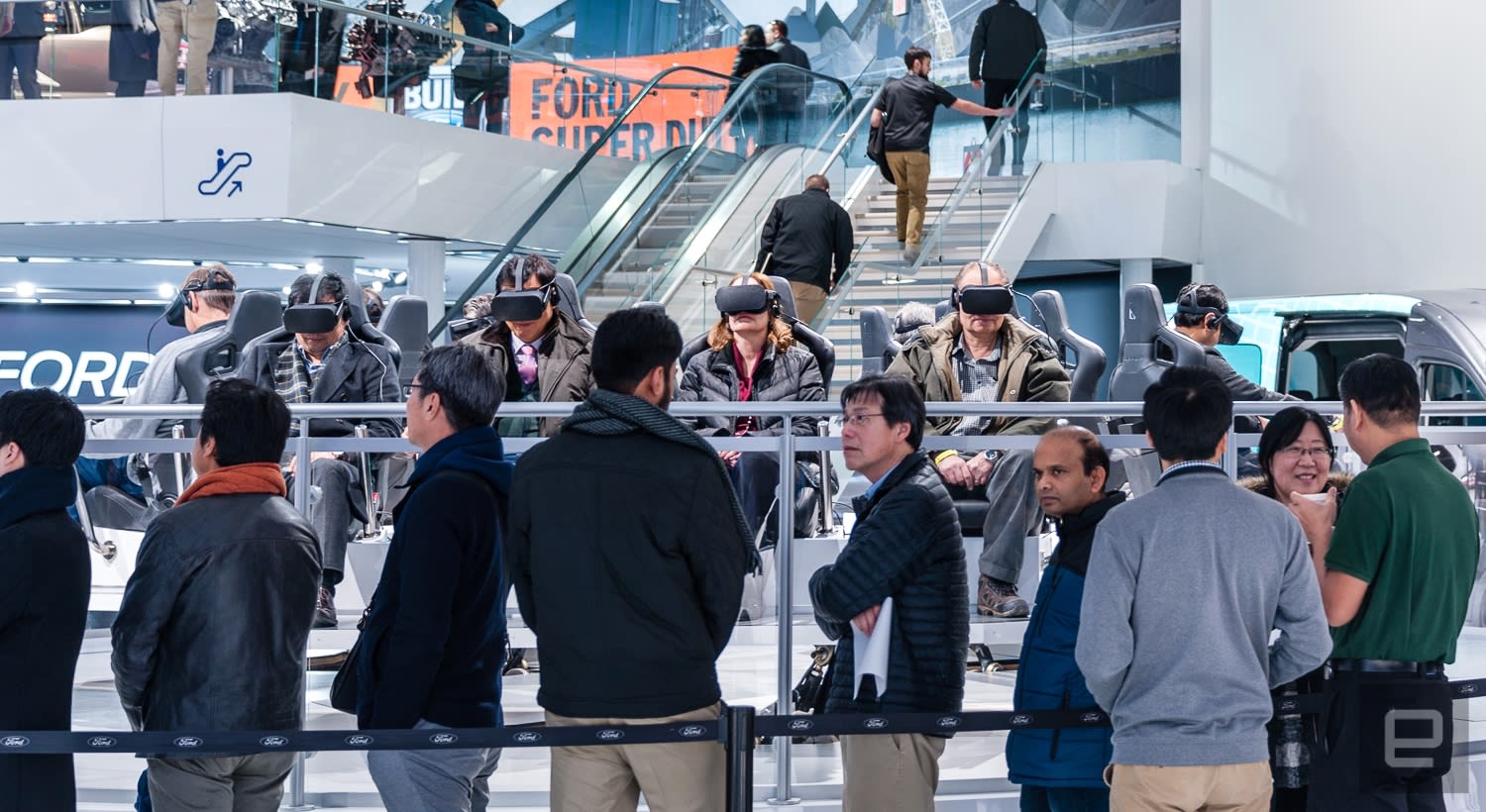 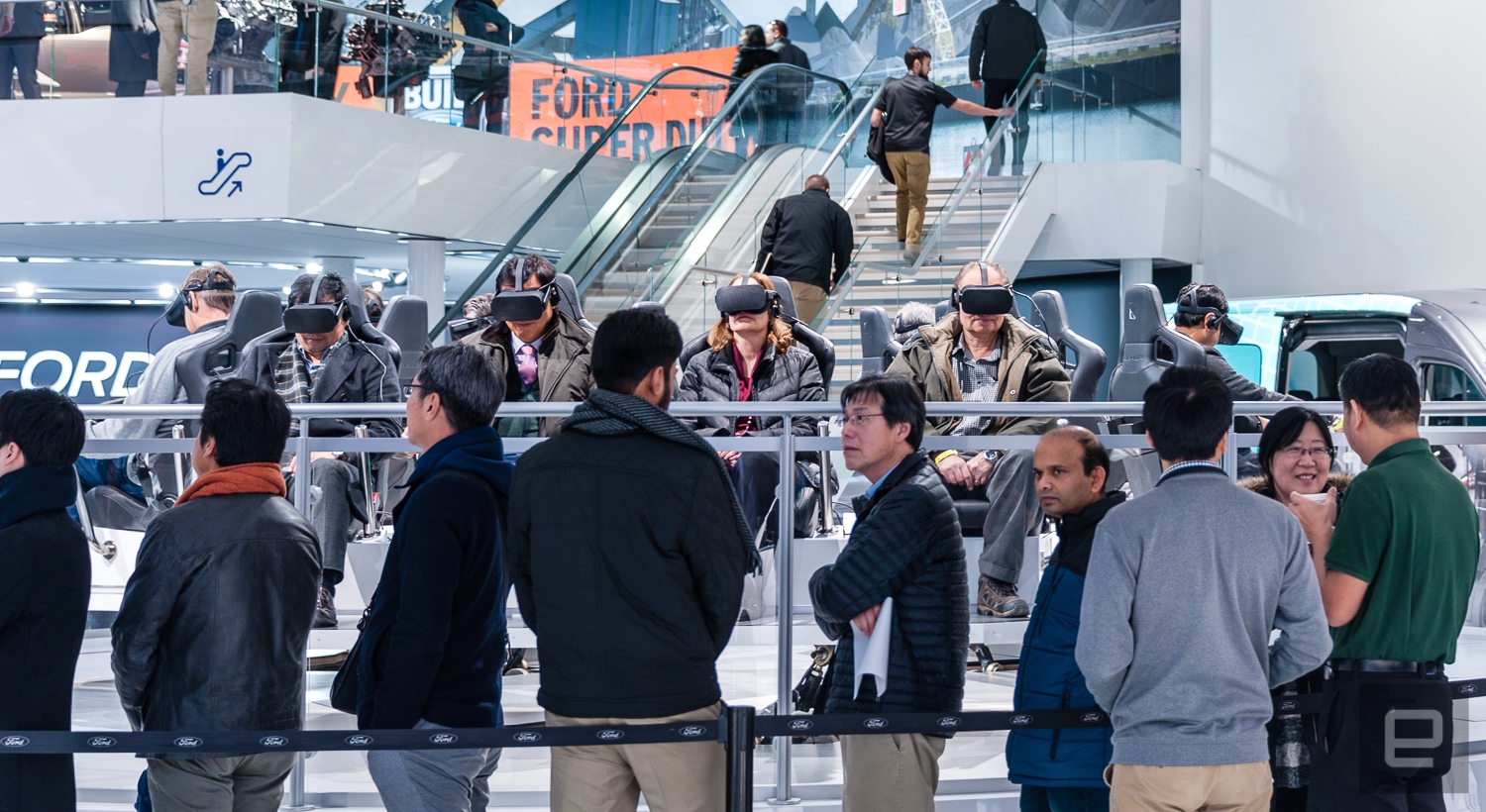 Virtual reality and augmented reality are all over the North American International Auto Show floor. Chevrolet, Ford, Honda, Mercedes-Benz and Volkswagen are all using the tech to show off their latest cars and concepts. During the industry preview days (the show is open to the public through Sunday, January 28th) lines to try the experiences stretched around each booth.

The value to prospective customers is directly tied to the quality of each experience, though, and that quality shifts dramatically from one automaker to the next. Instead of thoughtful experiences that work within VR's current limitations and are simultaneously informative and entertaining, more often than not, the VR implementations felt like cheap amusement park gimmicks with little regard for the user's comfort.

Like its rival BMW did at CES, Mercedes is using an HTC Vive to put people behind the wheel of its new SUV (below). Where the two differ is in fidelity and presentation. In Las Vegas, BMW told me that its VR showroom for the X2 crossover SUV was limited to sitting in the driver's seat and standing outside the car to ensure the best experience possible. When I strapped into Mercedes' virtual G-Class, I could see why.

The G-Class' interior felt roomy in VR, and unlike in the virtual X2, I didn't feel like my head was going to brush the roof. But the overall visual quality wasn't up to my expectations for the luxury carmaker. There were jagged edges everywhere, and there wasn't much interaction -- the interior looked like a low-res model from an early Xbox 360 game. A trio of trim options floated over the steering wheel, and fixing my gaze on each one caused the cabin to change accordingly. Training my reticle over points of interest like the "Oh no!" bar above the glove box caused some text blurbs to appear. But there wasn't anything that really excited or surprised me. Essentially, this was a showroom brochure in VR. 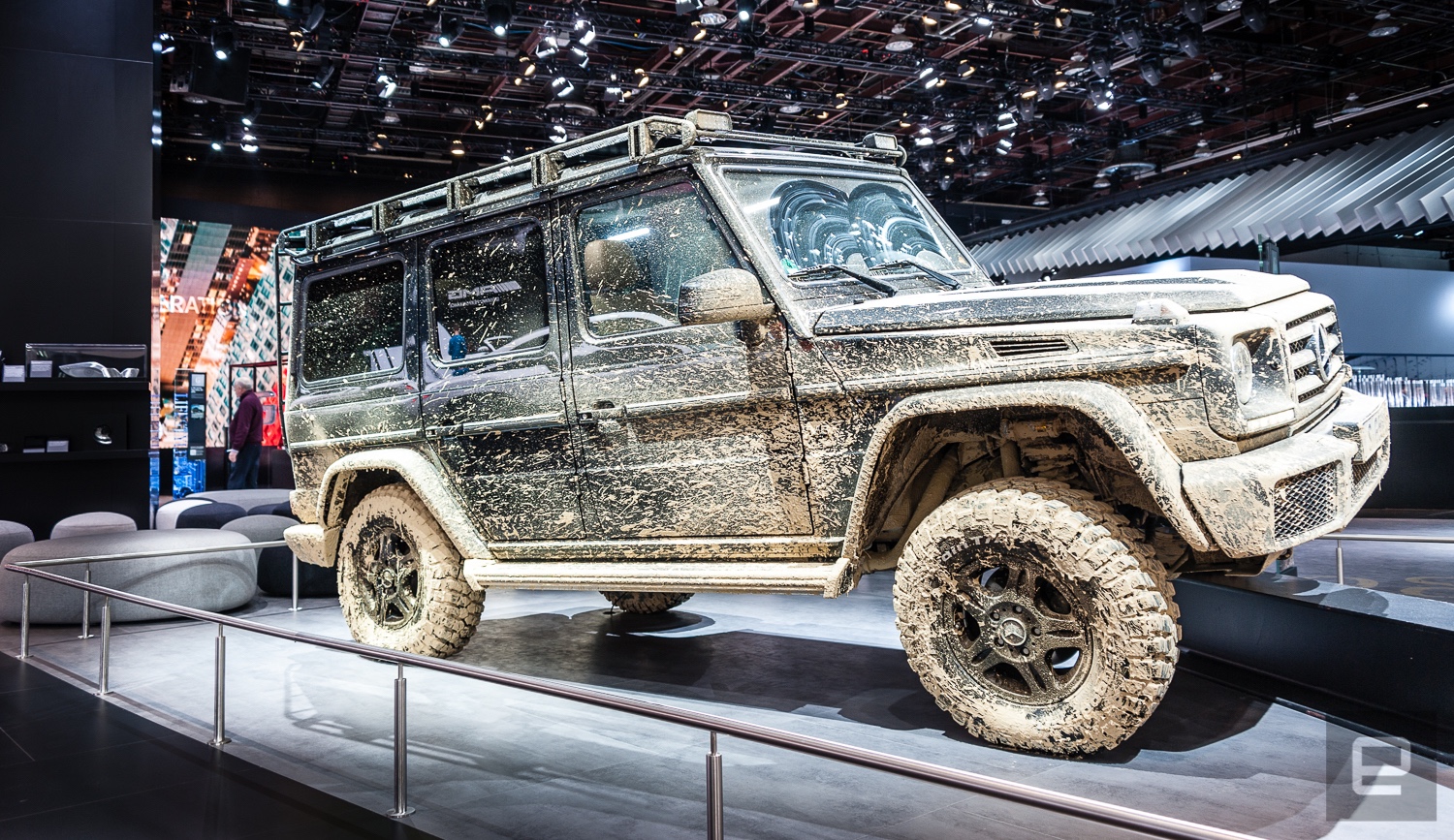 I can't say reading through dealership literature ever made me sick before, though. When I was examining the interior, the headset had a hard time keeping up and stuttered as I gazed about. That was when I found myself getting queasy. Just as bad, when I looked into the back seat, the Vive's entire screen flashed white, returning to normal only when I turned back around. "Maybe it's overheating," the booth attendant said. Mercedes' technical director, Björn Kantereit, told me there weren't any plans to make this available at home or in dealerships. Essentially, it's a high-tech parlor trick to take from one auto show to the next.

A virtual test drive through the SUV's proving grounds at Austria's Schöckl mountain wasn't much better, despite a lack of technical snafus. The three demos played grainy 360-degree video behind the SUV's low-quality rendered interior. A "moving" vehicle going up and down craggy hills while my body sat still was a recipe for motion sickness.

Kantereit said he hadn't heard of anyone at the show getting sick, but he did tell me that if he were to strap on a headset, he'd lose his lunch. According to him, the optimal way to upgrade the tech would be to change it completely.

"The best way [to improve] would be to go with HoloLens," Kantereit said, laughing. He said it's a better way because you can overlay information in the real world through a transparent screen, keeping people from feeling isolated. He's seen how it can be a boon for the company already: Mercedes has used HoloLens to train repair technicians. Since the first portion of the experience was just laying factoids over various touch points, AR seems like a more natural fit.

Honda, then, made the right choice in showing up with Microsoft's AR headset to show off its new Accord in "HondaLens." The 2018 sedan sat in the middle of a gated pavilion, and once I donned the headset, I was shown a timeline covering the Accord's 42-year history, narrated by a disembodied female voice. Information floated in front of me as I moved around the car. When I sat behind the wheel, purple, pink and blue holograms laid out traffic in front of me, showing off the vehicle's speed-sensing capabilities and HUD.

The same female voice offered instructions and information on how to pair my phone to the Accord's new infotainment system and pointed out the increased passenger legroom while I sat shotgun. All told, it took just over 10 minutes to see everything Honda had to offer. The drawback? HoloLens' narrow field of view. If I tilted my head too much one way or another, the holograms would cut off abruptly. When everything was working properly, however, it felt futuristic.

Charles Koch, manager of shows and exhibits for Honda and Acura, said that HoloLens is a natural extension of all of the electronics being packed into modern cars. Meaning that all the infotainment and autonomous systems are getting to the point where it's easier to use tech to explain them than it is to read the owner's manual or a sales brochure. If Honda and developer Spinifex can come up with a simple way to put HondaLens in dealerships, the pair will do it. That's right: Automakers aren't just bringing concept cars to auto shows anymore; they're bringing concept sales tools too. 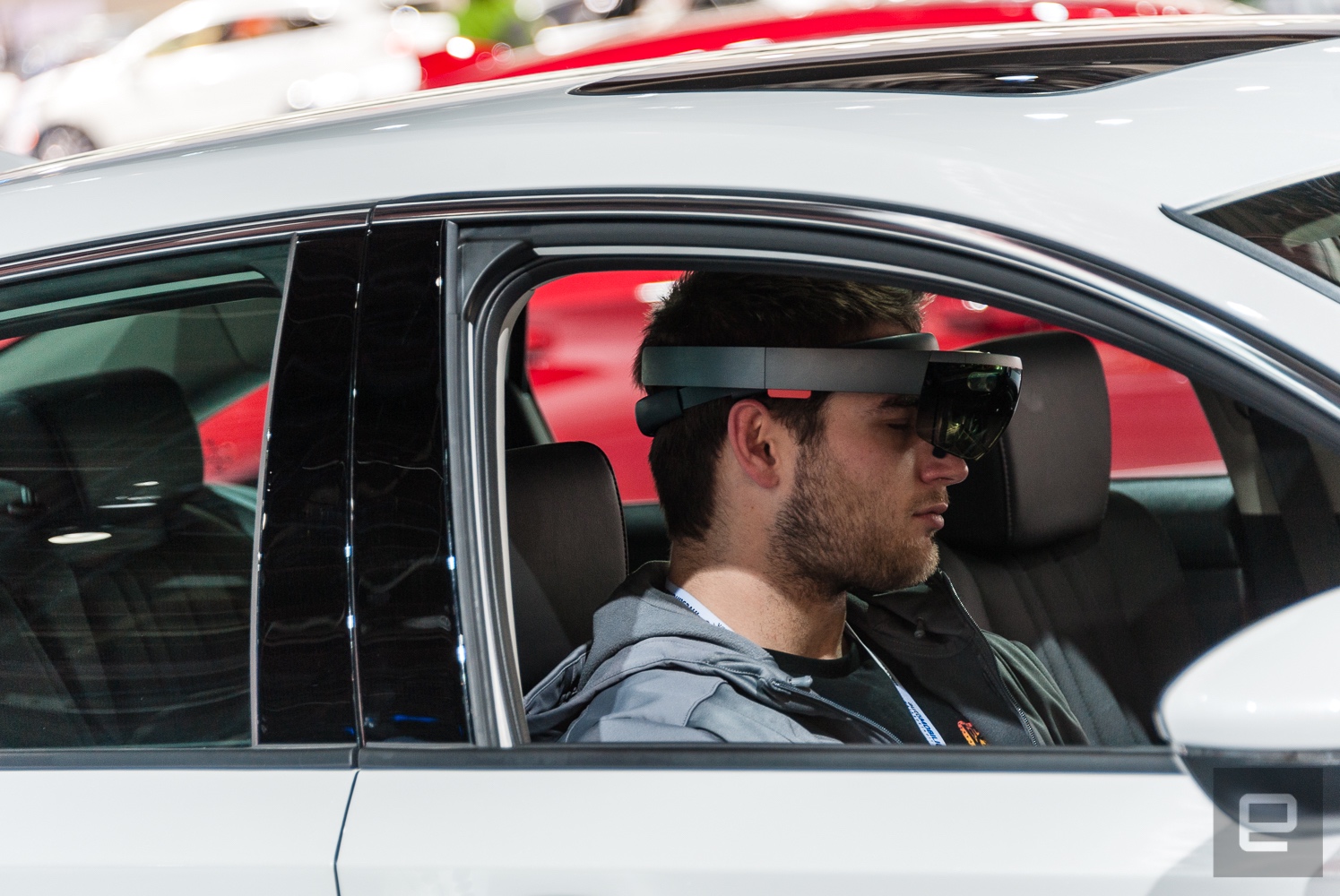 Volkswagen leaned hard on VR, using a Vive with a LeapMotion stuck to the front of it and a shell of its ID Crozz to show off the autonomous concept's capabilities. The first part of the demo was a virtual showroom experience, but instead of using a Vive wand or gaze tracking, I used my hand to "open" the car's driver-side door and examined the interior before taking the headset off. After that, I walked to the passenger side and donned another Vive and a pair of Beats headphones for a virtual test drive.

After I sat down and booth attendants manhandled a Vive onto my head, I was joined by a virtual companion who reminded me an awful lot of Ryan Gosling's virtual girlfriend from Blade Runner 2049. The outlines of her body shimmered and shifted, flickering in and out of focus, and she had a familiar, almost therapeutic lilt to her voice. She served as a guide, telling me where to look and what I could interact with, like the panoramic sunroof, ambient light colors and music. And because she was right there with me in VR, I didn't feel taken out of the experience.

When we took off down a coastal city street, the steering wheel and pedals tucked into the dashboard, and soon enough we passed through a narrow alley to get to a café. I was so calm throughout that, had my passenger not mentioned that someone had jumped in front of the car -- one of my biggest fears as a driver -- I wouldn't have noticed. Like Mercedes, the demo used a mixture of a pre-rendered interior for the car with low-resolution 360-degree video for the exterior. Head on, everything looked fine, but when I looked out the driver's window, people stuttered as they moved.

Chevy and Ford used grainy 360-degree video and gimmicky 4D "rides" to show off how their vehicles are tested before they reach customers. As I sat shotgun in a ZR1 Camaro, something pushed out of the backrest and punched me between the shoulders every time the driver shifted gears. During a hill climb in the Colorado ZR2, a dirt scent was pumped toward my face, and throughout the seven-minute experience my chair shook hard enough that taking legible notes was pretty difficult. 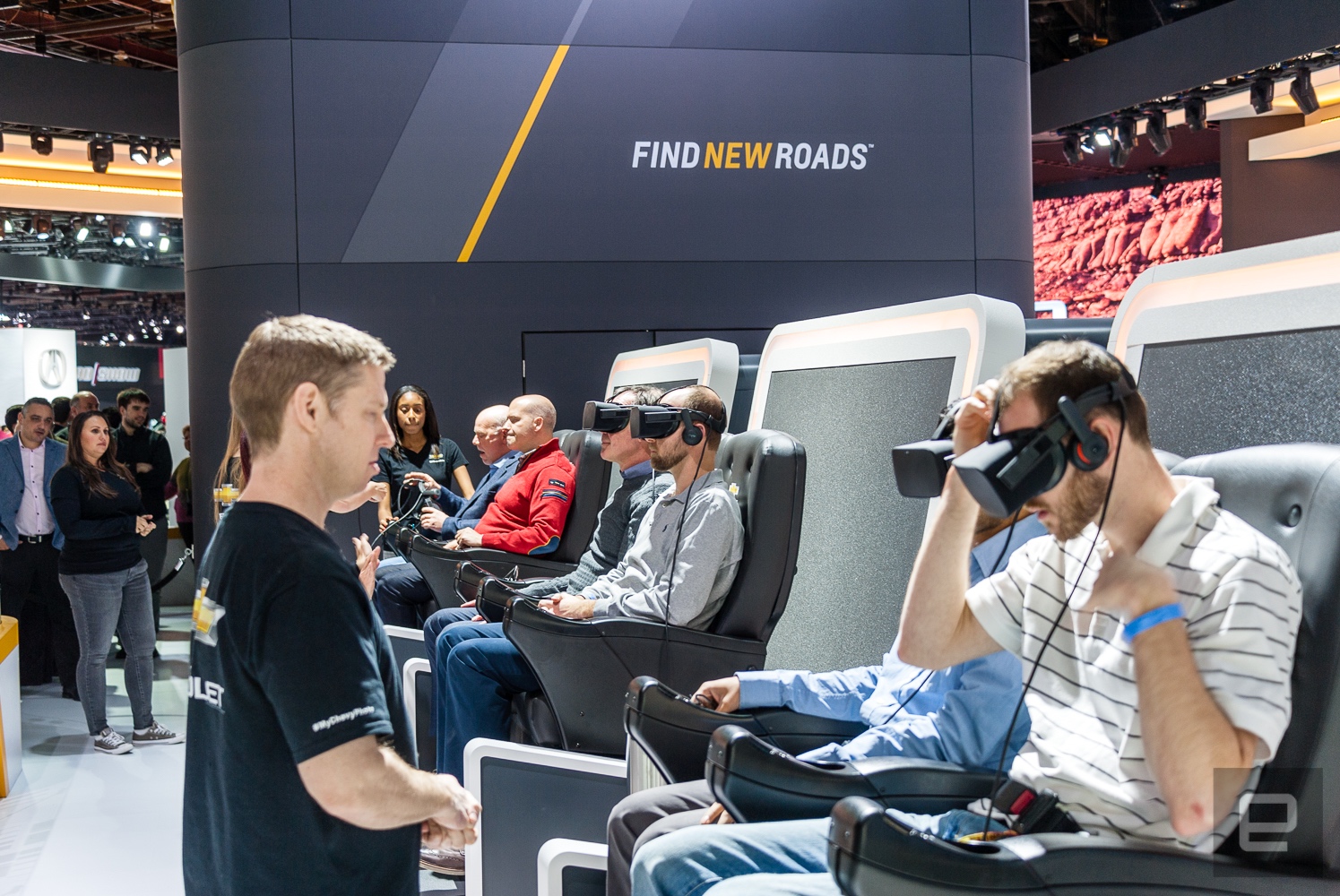 Relying on 360-degree video and its current limitations has its drawbacks, but GM isn't deterred. "We're still keeping this in mass-produced tech," said Myki Bowling, global marketing manager for Chevy's auto shows, referring to the Oculus headsets and 4D seating. "[Resolution and fidelity] are still something we have to deal and struggle with." Bowling explained that the idea behind the demo was to make Chevy's admittedly boring stories about dependability and reliability a little more exciting for customers. It kind of succeeded, but the 4D elements didn't do anything but cheapen the experience.

VR has the potential to change how people experience things they otherwise couldn't, but if the tech isn't carefully implemented, it can have adverse effects. For gaming and entertainment, making someone sick could cost a company, at most, $600 for a headset. But an unsold G-Class loses a carmaker upwards of $200,000. Lost sales due to poorly optimized experiences stack up quickly. If automakers are reckless about rushing to VR and AR, it could do far more damage than a poorly designed brochure.

In this article: augmentedreality, autoshow, chevy, detroit, detroitautoshow, ford, gear, gm, hololens, honda, hondalens, htc, htcvive, mercedesbenz, microsoft, naias2018, oculusrift, transportation, virtualreality, volkswagen, vr
All products recommended by Engadget are selected by our editorial team, independent of our parent company. Some of our stories include affiliate links. If you buy something through one of these links, we may earn an affiliate commission.