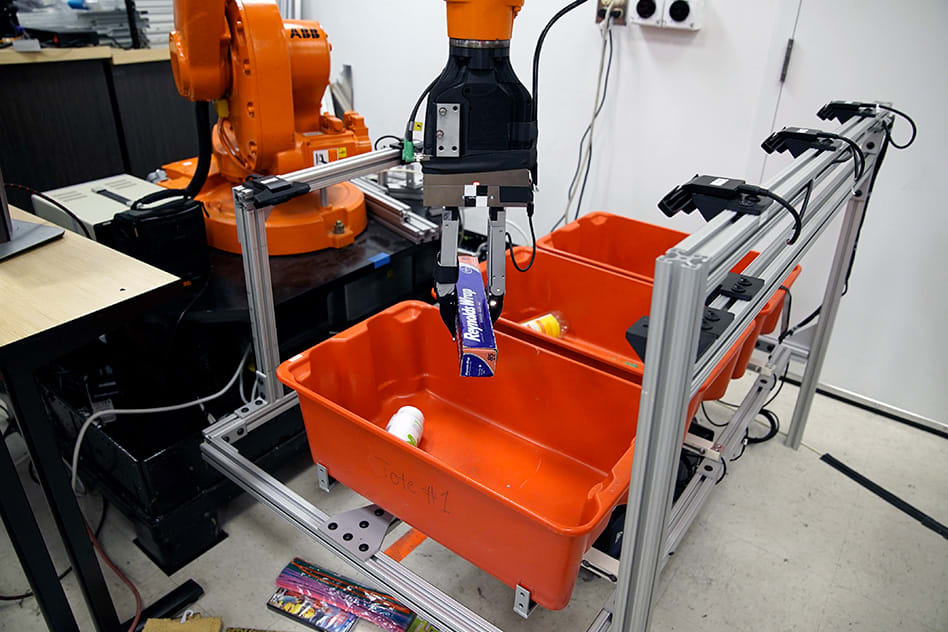 Sorting and organizing may not always be the most difficult tasks, but they can certainly get tedious. And while they may seem like prime examples of something we might like robots to do for us, picking up, recognizing and sorting objects is actually a pretty difficult thing to teach a machine. But researchers at MIT and Princeton have developed a robot that can do just that and in the future, it could be used for things like warehouse sorting or cleaning up a disaster area.

The team first trained the robot how to determine the best way to grip an object. They showed it bins of various items and then demonstrated which of four main grasping behaviors -- suction onto it vertically, suction onto it from the side, grip vertically and grip vertically while also using a flexible tool to coax objects away from a wall -- was the best option for a particular object. They did this over and over again, labeling which attempts were successes and which were not and eventually they plugged all of the information in a deep neural network. That allowed the robot to approach new objects with a strategy based on what it learned from its previous attempts.

Once the object is gripped and lifted out of the bin, the robot then has to figure out what it is. In their setup, the researchers have a set of cameras that take pictures of the object from all sorts of angles and those images can then be compared to a library of other images the robot has access to. Once it finds a close match, the robot then moves the object to another bin, based on what the item is.

At the Amazon Robotics Challenge last July, the robot was able to successfully grasp objects 75 percent of the time (though only 54 percent of the time when using its suction grip) and it correctly classified each novel item it was presented with. The team is now working to improve the design and plans to present a paper on their work at the IEEE International Conference on Robotics and Automation in May.

"This can be applied to warehouse sorting, but also may be used to pick things from your kitchen cabinet or clear debris after an accident," Alberto Rodriguez, a researcher on the project, said in a statement. "There are many situations where picking technologies could have an impact." You can see the robot in action in the video below.

Via: MIT
In this article: algorithm, amazon, gadgetry, gadgets, gear, grip, MachineLearning, NeuralNetwork, robots, sort, video
All products recommended by Engadget are selected by our editorial team, independent of our parent company. Some of our stories include affiliate links. If you buy something through one of these links, we may earn an affiliate commission.