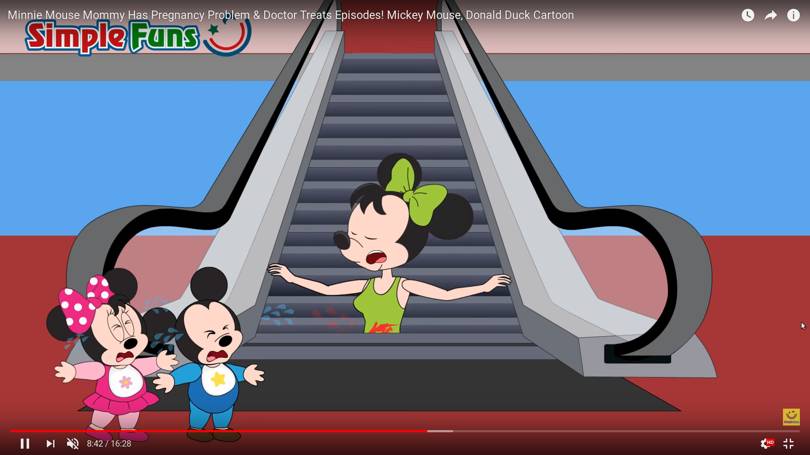 There's a section of supposedly kid-friendly YouTube that's rife with odd and often disturbing videos. But though YouTube began actively addressing the issue last year, there still appears to be a problem. Just a few days ago, Business Insider reported that the YouTube Kids app was suggesting conspiracy theory videos and now Wired reports that there's still quite a bit of strange, deeply troubling content out there geared towards children.

Wired came across videos showing animated characters attempting suicide, setting each other on fire, gouging their eyes out and being violently maimed by an escalator. In many cases, these videos featured knock-off depictions of beloved cartoon characters, such as Minnie Mouse and Peppa Pig. And these videos didn't even have to be sought out. Wired found some of them just by following the recommended videos in YouTube's suggested video bar. In just thirteen clicks, YouTube took them from a legitimate CBeebies video to a fake Paw Patrol video featuring a suicide attempt.

The disturbing kids' video issue was highlighted last year and YouTube has made some attempts to fix it. In November, the company said it would begin applying its community guidelines more quickly and strictly, removing ads from inappropriate videos targeting kids, blocking inappropriate comments on videos featuring children, providing guidance for those creating kid-friendly content and would continue to engage with experts on the issue. Last June it also added new guidelines that prohibit "content that depicts family entertainment characters engaged in violent, sexual, vile or otherwise inappropriate behavior, even if done for comedic or satirical purposes," from earning advertising money.

YouTube notes that the main YouTube app is meant for those aged 13 and above and younger individuals should use the YouTube Kids app. In a statement, a YouTube spokesperson said, "We've taken a series of tough actions to better protect families on YouTube and YouTube Kids, including getting content down faster through technology, hiring more people to help us tackle content that breaks our rules and cutting the revenue streams to content that misleads families. The YouTube team is made up of parents who are committed to improving our products and getting this right."

All of the videos and channels containing disturbing kid-geared content that Wired reported to YouTube have been removed.

Via: Wired
In this article: av, children, entertainment, google, kid-friendly, youtube, youtubekids
All products recommended by Engadget are selected by our editorial team, independent of our parent company. Some of our stories include affiliate links. If you buy something through one of these links, we may earn an affiliate commission.