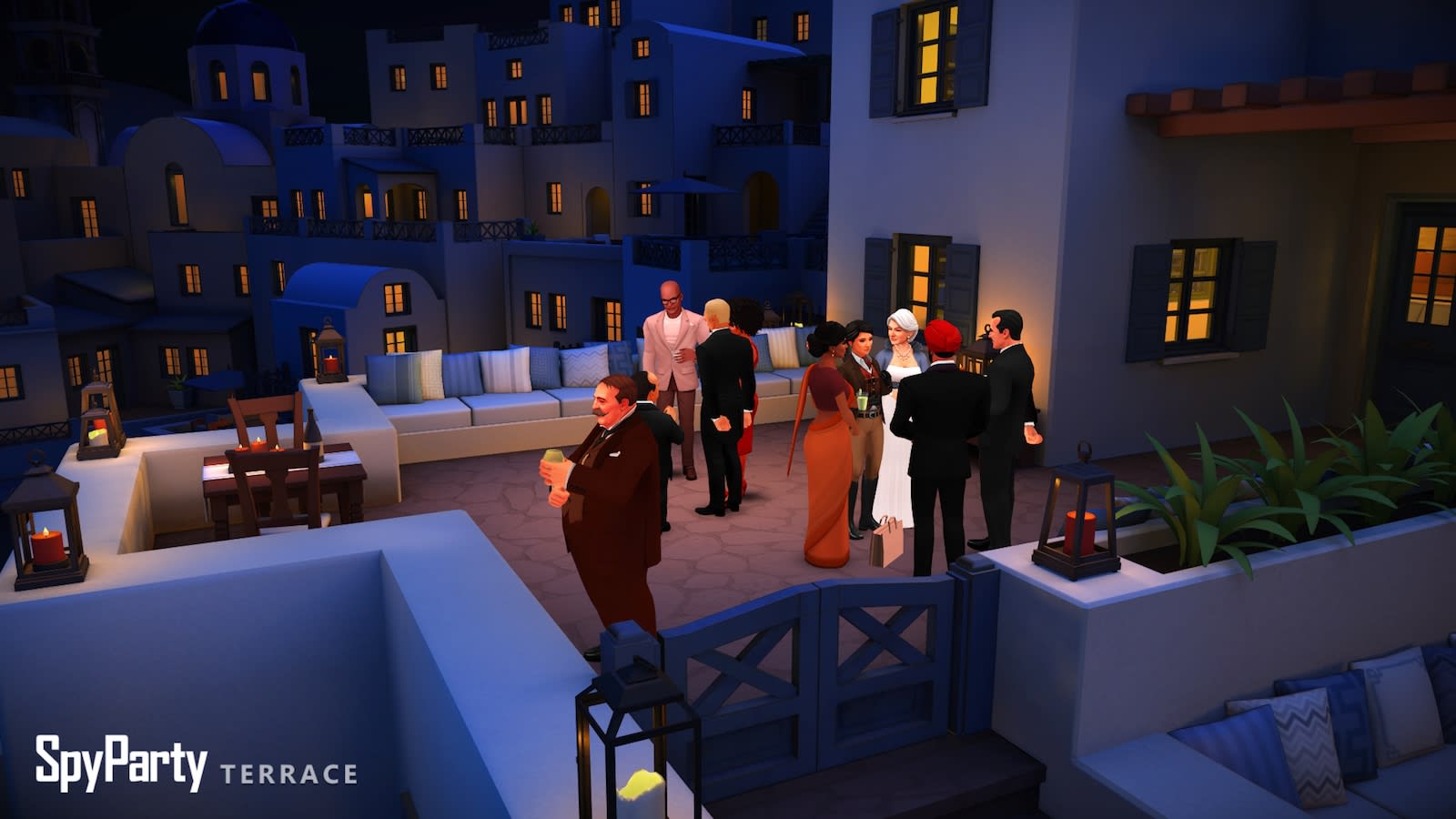 Chris Hecker, the creator of SpyParty, is smiling and gesturing wildly over the open lid of a laptop showcasing the game's six new upgraded maps. After 10 years of development, SpyParty is finally going to land on Steam Early Access on April 12th, and Hecker is barely containing a cacophony of emotions -- not all of them bad.

"That's fucking crazy and I'm terrified, like literally, abject terrified, and my anxiety level is through the fucking roof," he says. "But I'm excited too, and we'll see. There's a whole bunch of things I'm concerned about with that and excited about that. Like the fact that I have the best online competitive gaming community ever."

One of Hecker's greatest concerns -- and accomplishments -- with SpyParty has been the community. He's placed an emphasis on cultivating a welcoming, knowledgeable and non-toxic player base as the game has been put through its paces in beta on Hecker's own website. In his mind, SpyParty can't exist without an engaged pool of people helping each other out, and he might be right. It's a dense competitive game with thousands of tiny rules essential to top-tier play.

SpyParty is the Turing Test in video game form. It's a one-on-one battle of wits and detection, where one player is a spy and the other is a sniper. The spy attends a party packed with AI characters making small talk, wandering the room, drinking, and generally behaving as fancy humans would. The spy's job is to blend in with these AI characters while stealthily completing a series of tasks for their mission.

Meanwhile, the sniper watches everything from afar, attempting to pick out the spy and shoot them on the spot. Certain spy moves will trigger sounds or actions at the party, while specific characters are known to behave in unique ways when they're controlled by the AI -- the sniper is looking for any inconsistencies or slipups by the sole human in the room. 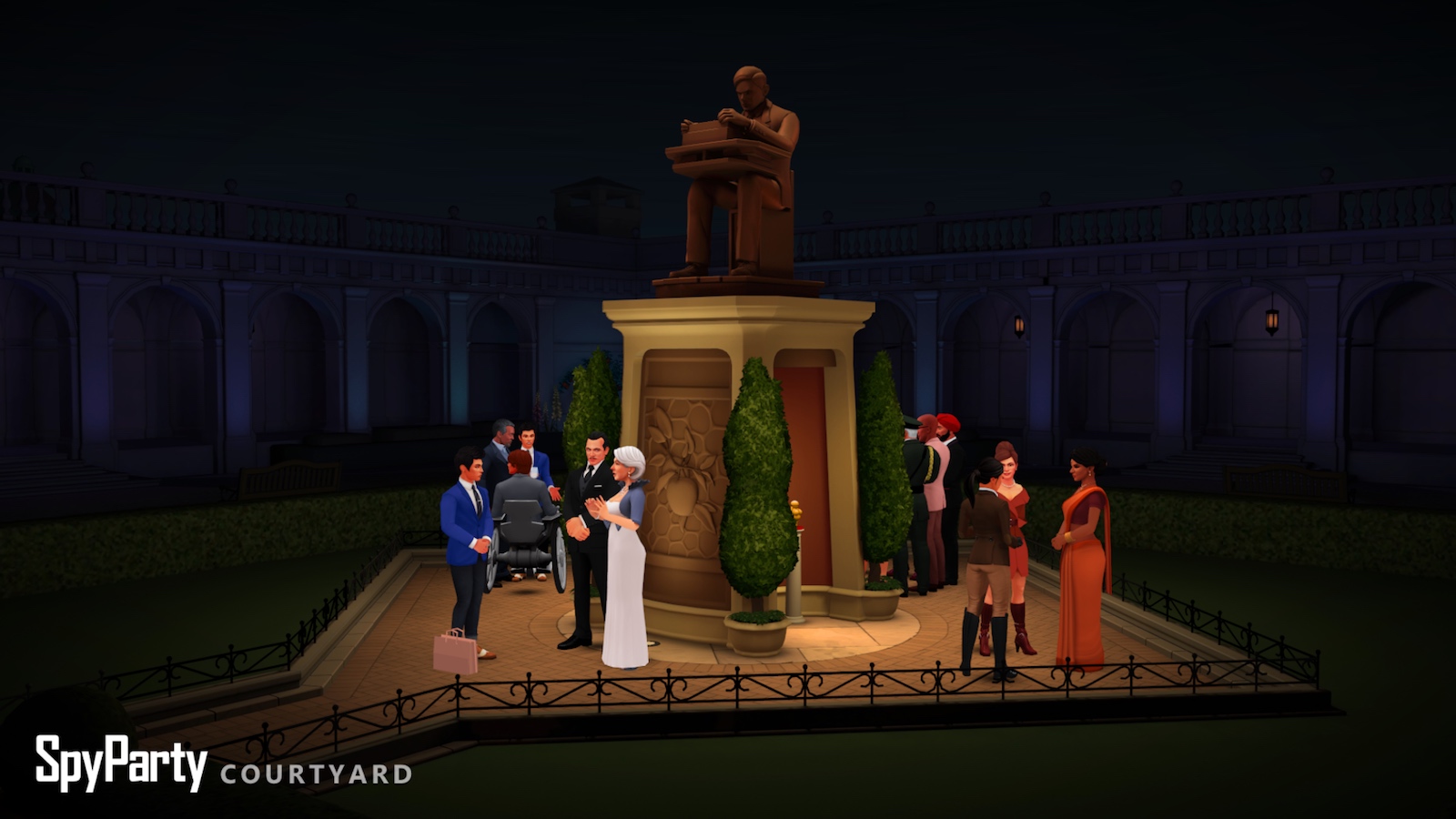 With 21 fully fleshed-out characters and 10 maps, there are hundreds, if not thousands, of avenues for the spy to be caught in each round, and just as many opportunities for them to conceal their actions, complete the mission and win the game. Demos used to be accompanied by a printed four-page user manual outlining the game's most important intricacies. Thankfully, on Steam Early Access, the manual has been replaced by an interactive tutorial narrated by Hecker himself.

The tutorial is an attempt to emulate the successful formula Hecker has instituted at conventions like PAX and GDC, where he's shown off SpyParty at booths staffed by some of his most dedicated beta players. These volunteers steer new players through the game in real-time.

"All the fans man the booth and they teach you to play," Hecker says. "So I was like, I'm gonna try to emulate that. We know that at least works. People learn to play, they like the game when they play. So I narrate the tutorial with full voice." 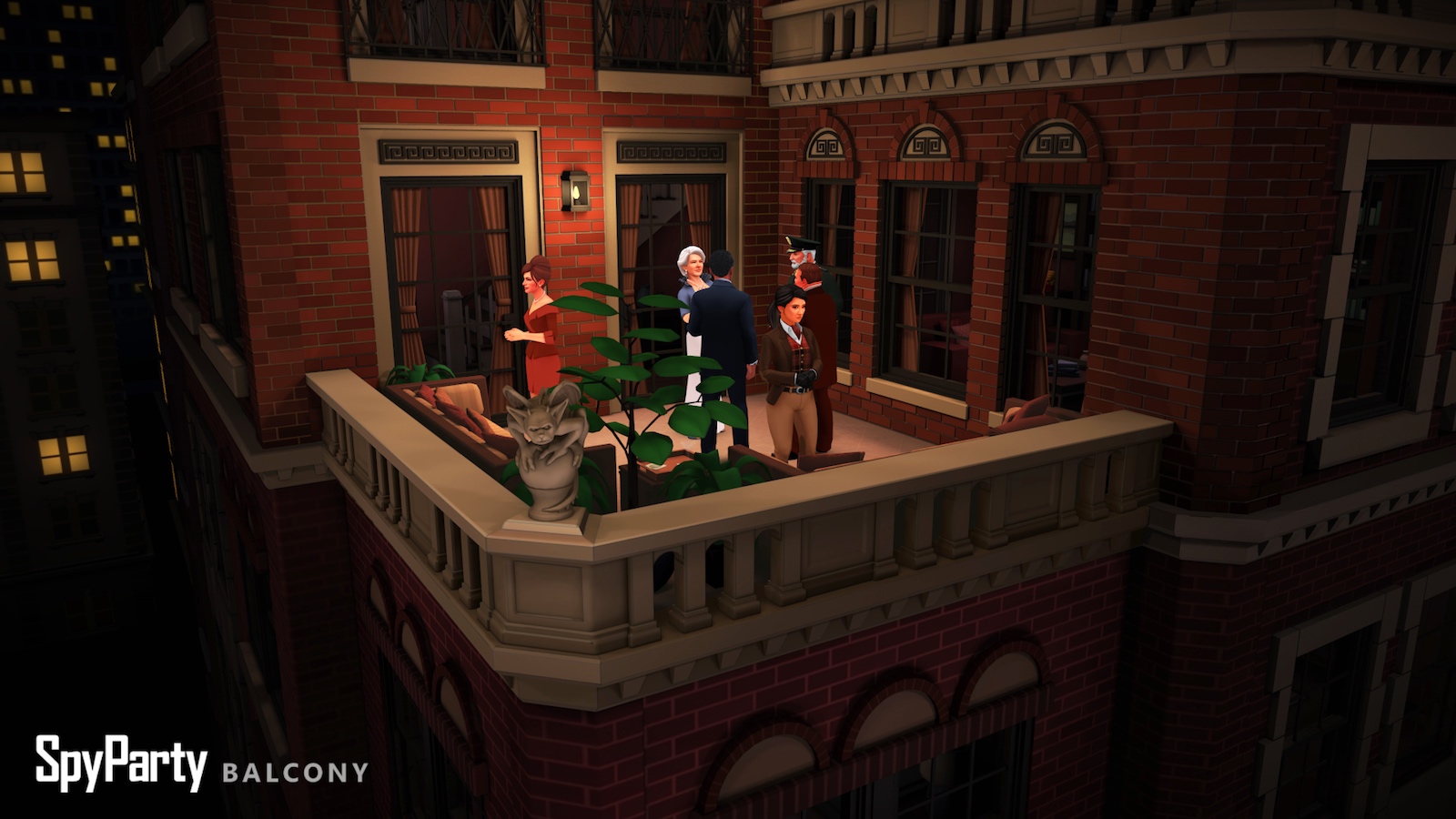 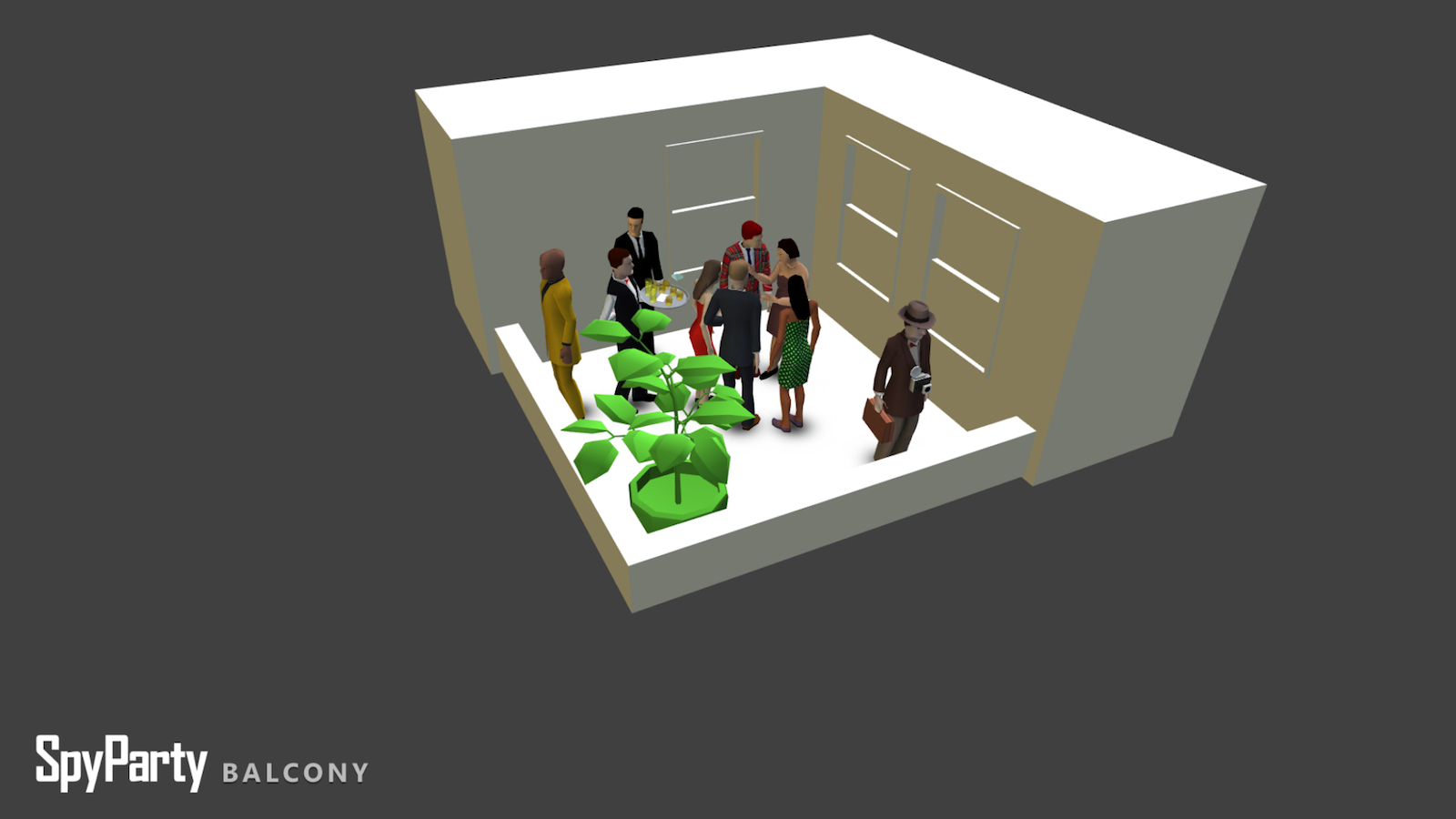 Alongside a shiny new tutorial, the Steam Early Access version of SpyParty will have a total of 10 updated maps built by Hecker's partner in crime, artist John Cimino. As SpyParty has stewed in beta over the past decade or so, it's largely featured placeholder art -- blocky, 3D characters and environments plastered in primary colors. But today, SpyParty is gorgeous, featuring fully shaded and colored villas, restaurants, mansions and balconies, and a cast of striking, diverse characters.

These 10 maps are live today in the SpyParty beta, and they'll be available in the Steam Early Access version when that launches April 12th. Anyone who buys into the beta via Hecker's website will automatically receive the Steam version as well. This is notable for any interested spies and snipers, as the game's price is set to rise when it hits Steam: The SpyParty.com beta is $15, while the Steam Early Access version will cost $25.

"The players told me to do it," Hecker says about the price increase. "They were like, 'Your game is way under-priced at $15.' So, there you go. I mean, maybe not when it was the old art."

"At indie scale, you can't make something an eSport."

That old art and a decade of playtesting has helped Hecker create a rich, competitive game unlike any title currently on the eSports market -- a market that didn't even exist when he began building SpyParty.

"At indie scale, you can't make something an eSport," he says. "That happens, that's something the players do. I'm putting, obviously, all the stuff in there to make it possible to -- I don't even know what an eSport means, at some level, right? But I'm making an intensely competitive multiplayer game."

With the inception of Twitch and eSports on a mainstream scale, the video game industry might finally be ready for SpyParty -- just in time for SpyParty to finally be ready for prime time. It even has a ridiculously deep replay system, allowing players to relive their matches from all variety of perspectives and speeds, and slice together their most amazing moments for YouTube and beyond. 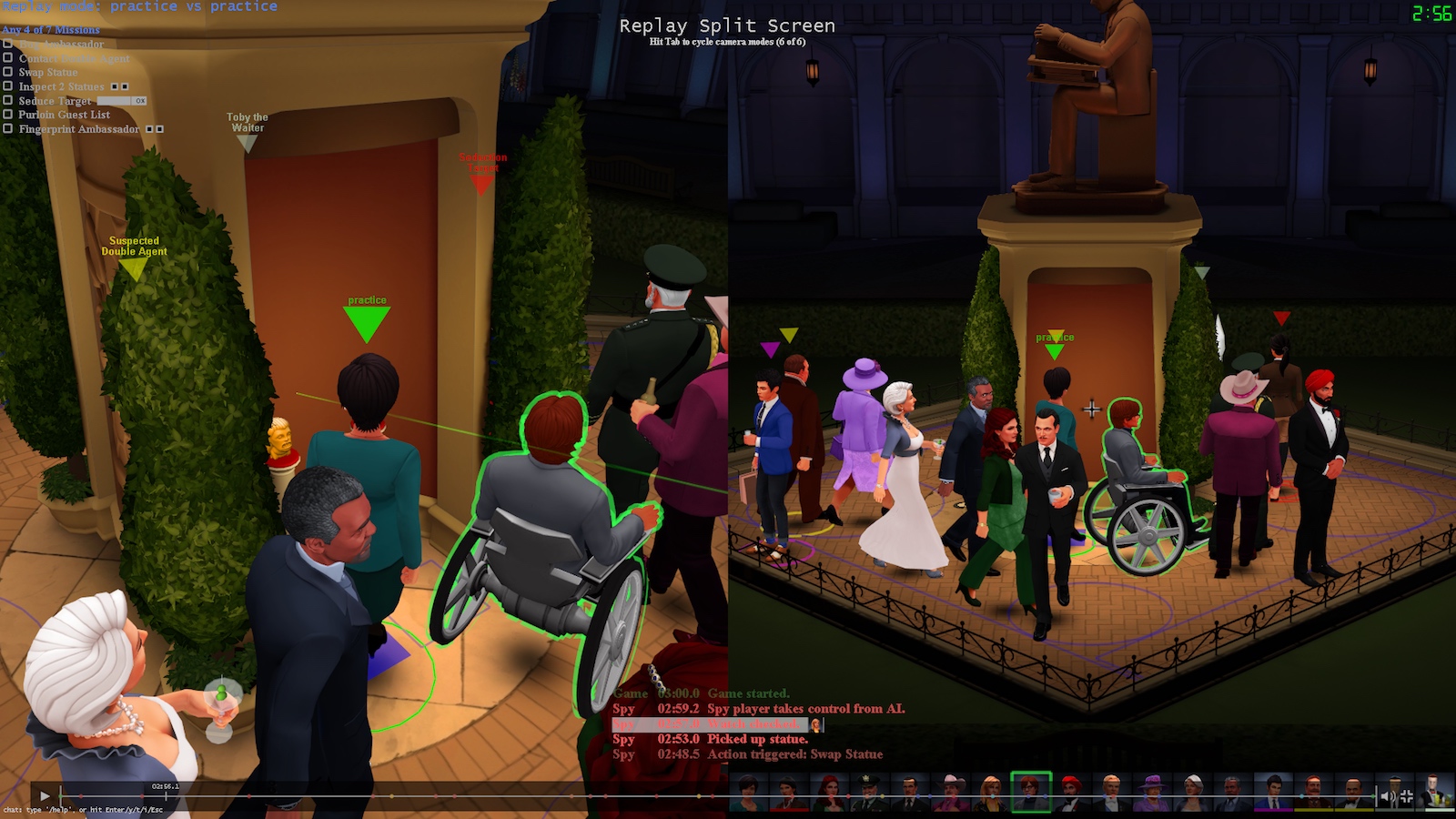 This is truly, really, the beginning of the end of Hecker's 10-year journey to release SpyParty in its entirety.

As a former developer at Microsoft and Electronic Arts, Hecker began working on SpyParty with hundreds of thousands of dollars in big-name company stocks to back him up. After 10 years of development, including paying Cimino a AAA-level salary, he's recently had to borrow some money from his mom to keep things rolling.

"But I can program a computer in the Bay Area. I'm not gonna starve, worst case, right?" Hecker says. "So that helps me not like, just die from the anxiety. But it is hugely scary. Because it's the culmination of 10 years of creative work. I know the game is good, people love -- the top players have 20,000 games. I know I made what I wanted to make."

At 47, Hecker is living the indie life commonly associated with young fresh-out-of-school developers. He's living the life he built for himself, one spy and one sniper at a time.

"It's weird to be 47 with a kid and a mortgage, and literally have like -- I have literally no idea what my life is gonna be like in 30 days," he says. "In less than 30 days this game ships and I'll have some idea of how it's doing, and it's just a weird, that's an 18-year-old feeling. Where you're like, 'I don't know, I'm moving away from home, and what's gonna happen?' Who fucking knows?"

In this article: av, beta, ChrisHecker, design, esports, gaming, indie, interview, personal computing, personalcomputing, spyparty, steam, steamearlyaccess
All products recommended by Engadget are selected by our editorial team, independent of our parent company. Some of our stories include affiliate links. If you buy something through one of these links, we may earn an affiliate commission.