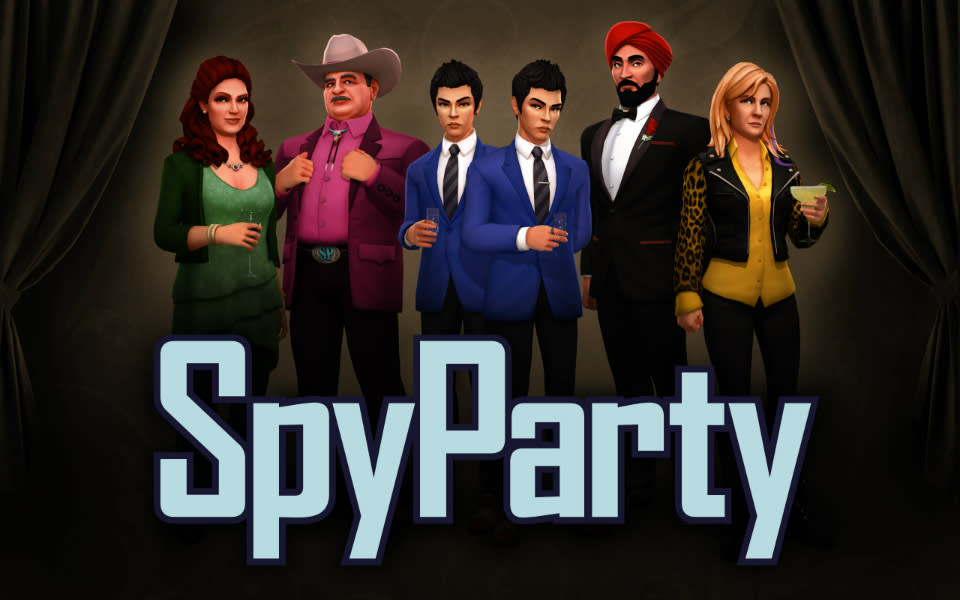 Game developer Chris Hecker attended Parsons School of Design in the late 1980s -- his admissions counselor was a fashionable man named Tim Gunn, who accepted Hecker's portfolio complete with a four-foot oil painting of Freddy Krueger, the canvas slashed as if it had been attacked by the subject's own bladed fingers. Hecker eventually dropped out of Parsons and studied computers, picking up jobs at Microsoft and, finally, EA Maxis, building Spore. Now, he's an independent developer and his current project, SpyParty, has been in the works for eight years. Hecker is experienced. He's a veteran developer. He's a relic of gaming's lost AA industry. Or, as Hecker puts it, he's "old and decrepit."

Hecker's age and experience lend him an intriguing perspective on the industry. He's building SpyParty -- a complex, online battle of wits and reflexes between one sniper and one spy -- with just two people, himself and artist John Cimino. Small teams work well for many successful independent developers, such as Vlambeer (Nuclear Throne), Mike Bithell (Volume), Asher Vollmer (Threes), Davey Wreden (The Stanley Parable), Cardboard Computer (Kentucky Route Zero) and countless others. Still, fans of indie games routinely question the amount of time it's taken Hecker to develop SpyParty, often suggesting that he simply hire more people to get the work done quicker. That's problematic for two reasons, Hecker says.

One, more people means the game needs to make more money, raising the financial risk. Hecker guesses he's spent as much as $600,000 developing SpyParty, mostly by himself and recently with just one partner. Now imagine he had 10 people working on SpyParty, he says: "There's a million dollars a year, just right off the bat, flat, for those people -- if you're talking about even just reasonable salaries in a high-demand area. You can do it for cheaper than that, but then it's hard to find, like, 10 awesome people in the middle of Oklahoma where you can pay someone $50,000 a year. It's a trap." Shit has to simmer in your brain for months, years sometimes.

Second, the creative process takes time. This is the aspect that business-minded people often don't consider, Hecker says. He's still dreaming up new systems, trying out fresh ideas and perfecting his project -- and it's been nearly a decade.

"There's a wall-clock aspect to good game design," Hecker says. "Shit has to simmer in your brain for months, years sometimes. So, if you've got a lot of people, then the clock is ticking and the ticking clock is anathema to good game design, in my opinion, if you're trying something really new."

And Hecker is definitely trying something new. SpyParty is easily described as a Turing Test disguised as a competitive stealth game and shooter. One player is the spy and the other is the sniper; the spy must blend into the AI-controlled crowd at a fancy party and execute missions, such as placing a bug on a diplomat or tinkering with a small statue. The sniper has to suss out which of the partygoers is the human (therefore the spy) and then shoot that character. One shot, one chance to get it right -- or terribly wrong. There will be 21 characters total in SpyParty, and Hecker and Cimino have been releasing the final art for these party people in small batches over the past few years. The latest group of characters builds on a stylistic necessity that Hecker laid out at the very beginning: diversity.

For example, Mr. K is Sikh and wears a traditional turban and beard; Ms. L is a rocker chick; Ms. O is a statuesque Mediterranean woman; Mr. P is a Mexican billionaire; and the identical twins, Dr. M and Dr. N, are beautifully gender-ambiguous. Hecker isn't shoehorning a diverse cast into SpyParty. He says that the game itself calls for a wide range of eccentric, unique characters.

"The party looks cooler with all kinds of different-looking people there," he says. "And there's the aspect that games don't do this that much at all. So it's great to have a game where it's not like a forced thing. It's a game where it embraces it completely. I'm a big proponent of listening to the game." A diverse cast doesn't mean that all of the rules are off, of course. It means that Hecker and Cimino have to do some research, and they want players to keep them in check and ensure that each character is as authentic as possible. Take Mr. K, a follower of Sikhism, for example. If Mr. K debuted in SpyParty drinking a martini, Hecker would want someone to let him know that Sikhs don't drink alcohol. He's not looking to offend anyone, for any reason.

"If someone's just offended that we put a Sikh in a video game, then they get a copy of this video," Hecker says.

SpyParty is already available to play in beta form, and it's been downloaded about 15,700 times. "It's not selling enough yet to pay for John's salary and me to live and whatnot -- let alone pay back my daughter's college fund -- but I'm not that worried," Hecker says. He still plans to release it on Steam Early Access, giving him an immediate potential audience of 100 million players. He'll do that on his own time, though, just like he's approached SpyParty's development for the past eight years. Hecker is not alone in taking weird risks on big indie games: His longtime friend and fellow developer Jonathan Blow, creator of the hit 2008 platformer Braid, has funneled all of his money into the production of his next game, The Witness. Blow and Hecker represent the new normal of AA development: something larger and more funded than a no-name designer working on a passion project, but smaller than the corporate teams creating Call of Duty, Halo or Destiny.

"The Witness is an example of a 10-person game, but Jon blew all of his money on it," Hecker says. "Everything is riding on it. It's not a stable business model -- he's just insane. And that's great; it's good for us that he's insane and willing to spend all of his money, but that wasn't a stable business model. You can't assume you're going to have a hit that pays back all the money you spent as a business model for running a company. If Witness flops, all of those people are fired."

"That said, I'm spending all of my savings," Hecker says. "I'm also gambling huge on this, so who knows?"

In this article: AA, ChrisHecker, hdpostcross, Indie, IndieGames, spyparty
All products recommended by Engadget are selected by our editorial team, independent of our parent company. Some of our stories include affiliate links. If you buy something through one of these links, we may earn an affiliate commission.