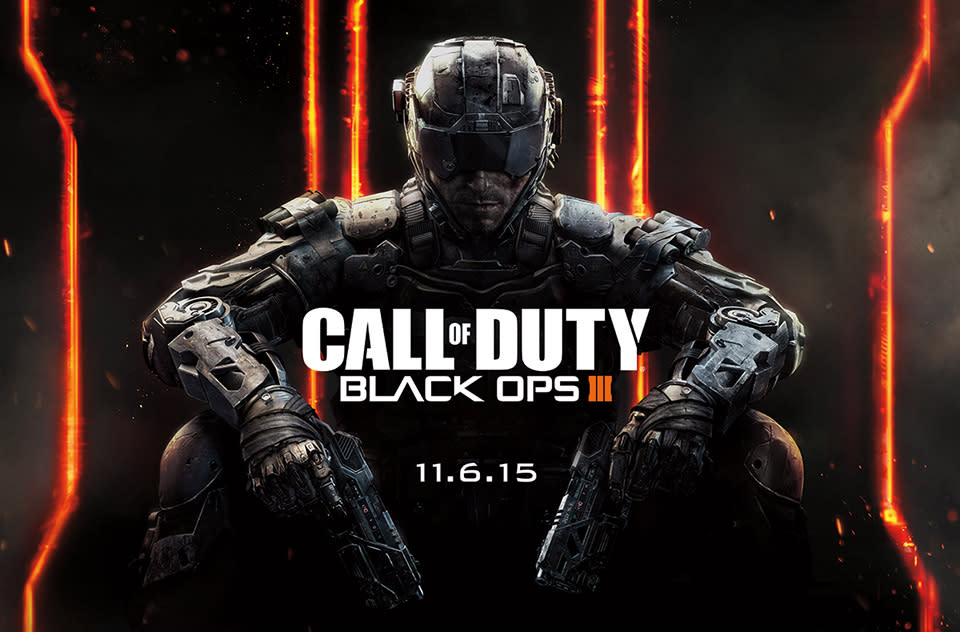 Developer Treyarch has a good record of keeping things fresh in Call of Duty. The company started working on the franchise back in 2005. With World at War it added zombies; Black Ops went to Vietnam; Black Ops 2 traversed time and added branching narratives. For its next installment, Treyarch is, once again, trying something new. Call of Duty: Black Ops 3 (set to arrive November 6th on PC, Xbox One and PS4) brings campaign co-op back to the franchise. The entire campaign will be playable co-operatively by up to four players online (or two players locally). The addition of up to three campaign players meant building bigger combat arenas, better AI and adding social features for showing off medals and achievements. "This Call of Duty campaign is all about choice. Your investment in your character is going to mean something more than it ever has before in any Call of Duty game," Studio Head Mark Lamia says. He hopes that upgradeable abilities and the opportunity to play campaign missions with friends will lead to more replayability in the game's narrative-driven mode. "Narratively? It's just mind fuckery," Lamia laughs, saying he wants to keep a shroud of mystery around the story in Black Ops 3. What is known is the campaign will continue the story of Black Ops 2, in a near-future war where soldiers have begun to augment their bodies to become more lethal killing machines.

For the first time in the franchise's history, the campaign's protagonist is fully customizable. In addition to upgrading abilities, changing your character's appearance and tweaking weapons, players can pick the gender of their Call of Duty hero. "It's not just a female head on a male body. It's a different set of animations for the entire game," Lamia says. Character interaction will even differ based on the protagonist's gender. "We knew we were going to do fully unique male, fully unique female for all scenes and all the customization that goes for both. Thank God for Blu-ray, right?" Campaign Director and Senior Executive Producer Jason Blundell jokes, adding the game's protagonist is fully voiced regardless of gender. There are more tricks up Treyarch's sleeve for its sixth Call of Duty title. While much of the game is still "classified," Lamia was quick to tease the game's core features during a day-long reveal meeting at its Santa Monica studio. For example, the return of Zombies mode, which will include a dedicated progression system and be more accessible to players that found previous iterations too difficult.

Game Design Director David Vonderhaar says there is a renewed focus on "winding the combat loop extremely tight" for the multiplayer mode in Black Ops 3. The loop, as he calls it, refers to continuous combat action. Anything that slows down the pace of action has been deleted, Vonderhaar says.

The first major shift is the removal of sprint limitations. While unlimited sprint had been a special elite upgrade in the past, it is now the norm for all. Jumping over objects has been overhauled as well; as a player moves toward cover they will now automatically mantle over it regardless of the angle (whether the cover is in front, behind or to the side) without relinquishing weapon control. You can aim down sights as you move over objects now. Traversal, Vonderhaar says, can cut into what he calls "Call of Duty time." You don't have time to run up to a piece of cover, look down, press a button to vault and make it to the other side. In game, that motion takes split seconds, but it only takes split seconds to be killed. Power sliding is another new addition. The slide's boost of speed makes movement far faster than before, while never taking weapon or equipment control away from the player. You could, for example, slide around the corner staring down the sights of a sniper rifle for a devious trick shot.

Following the lead of other recent shooters, such as Titanfall, Black Ops 3 adds wall running. It too maintains the game's philosophy of never taking control away from players. As you run across walls, you still have full access to your weapons (hip-fire or aiming down the sights) and equipment (you can plant explosives on walls as you run across them). The last addition is somewhat puzzling: swimming. Nobody was clamoring for the ability to backstroke through a round of Call of Duty, but it does add another layer to the complex game world. Movement underwater is slightly slower, but you still maintain complete control of your weapons and other equipment. Since only one of the maps available during our demo had an underwater component, it's tough to judge whether it will drastically affect gameplay.

Timing of the new traversal options -- chaining an unlimited sprint, into a power slide around a corner, into a thrust jump toward a wall and then zigzagging through structures -- took less time to get used to than you'd think. These are fundamental changes to the speed and pacing of the way Call of Duty matches progress, adding a new sense of complexity to both strategy and danger. Vonderhaar says the new features allowed Treyarch to re-examine how it creates multiplayer maps. Now there are elevated plateaus to reach with boosts, underground canals to fight over while swimming, dangerous paths to wall run in between.

There are still a handful of familiar features found within Black Ops 3's multiplayer. Player and weapon progression are still the driving forces behind multiplayer replayability. Black Ops 3 attempts a few new wrinkles, including a gunsmith mode, which allows players to build unique-looking weapons in an attempt to give some identity to the inanimate objects. Treyarch is also introducing Specialists. Black Ops 3 Specialists are pre-set characters in multiplayer with a unique name and backstory. Of the nine that will be available in the game, Treyarch revealed four. Each character offers a unique play style and has a devastating special weapon, such as the Outrider's compound bow, and an ability, like Ruin's speed boost. However, players can only bring either the weapon or special ability into combat.

"I think one of the things that makes Call of Duty, year after year, interesting and exciting is [each game in the franchise is] not the same. I mean, there could be things that are the same, but each team has the ability to drive its own vision," Lamia says. Even though Lamia emphatically proclaims Black Ops 3 is "the deepest and richest Call of Duty ever," Treyarch is eager to prove it. For the first time since 2008's World at War, Activision will give players an opportunity to beta test Call of Duty. The publisher says the beta will be available to pre-order customers on PC, Xbox One and PS4 –- though it wouldn't confirm any timed exclusivity for Xbox One owners, which is generally how franchise content is distributed.

"This being our third Black Ops game, we like to look at this as 'the best of everything' we've had, going back even a decade," Lamia says. "That's what Black Ops 3 is all about."

In this article: blackops3, CallOfDuty, CallOfDuty:BlackOps, callofdutyblackops3, gaming, pc, playstation4, ps4, Treyarch, video, videogames, xboxone
All products recommended by Engadget are selected by our editorial team, independent of our parent company. Some of our stories include affiliate links. If you buy something through one of these links, we may earn an affiliate commission.