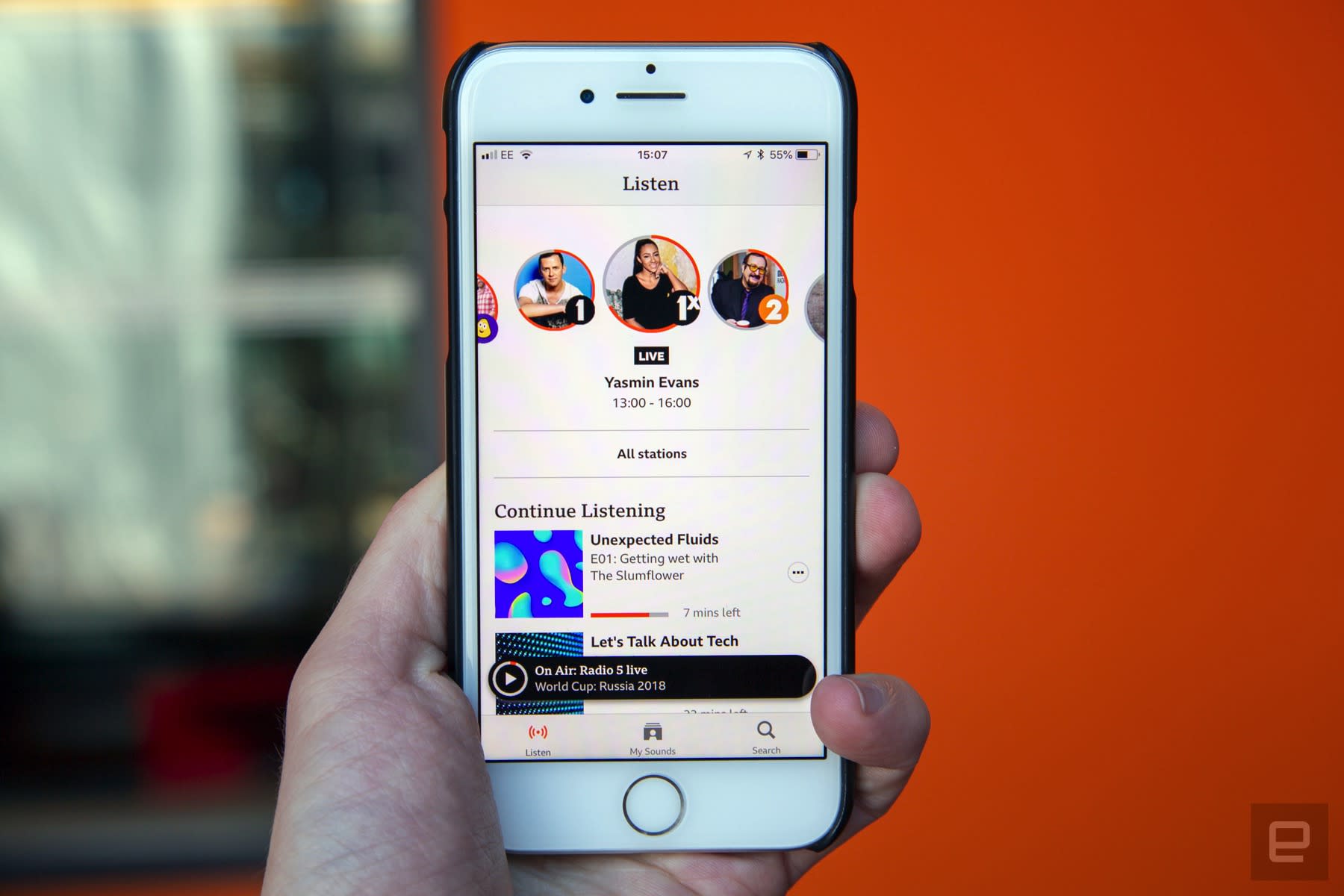 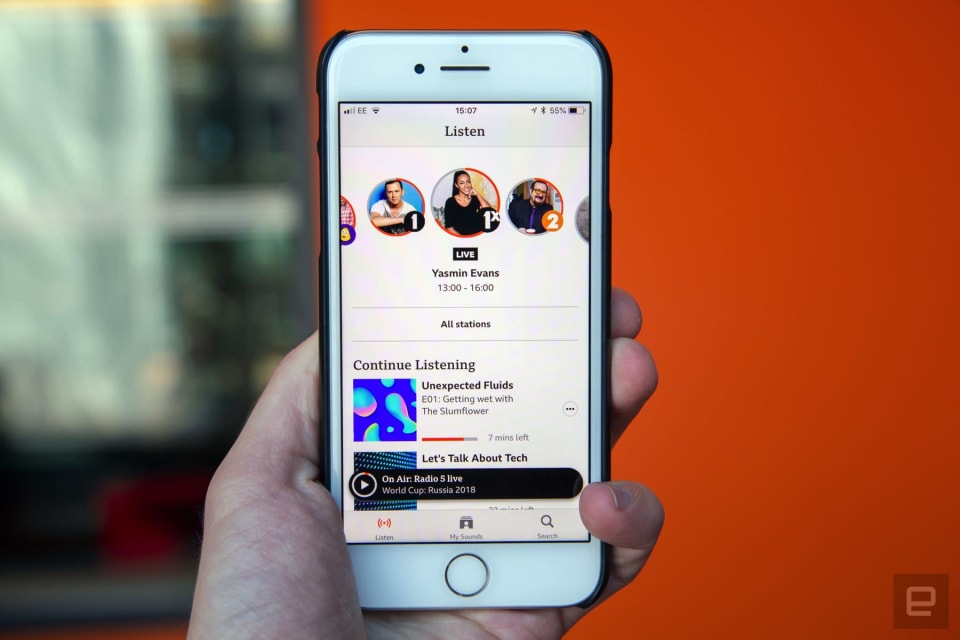 The BBC has a problem. For almost a century, the British broadcaster has run a variety of national and regional radio stations to great effect in the UK. Their influence, though, has waned in recent years as podcasts and music-streaming services have exploded in popularity. In response, the Beeb has embraced the podcast medium, packaging up new and long-time shows including The Archers, Desert Island Discs and The Infinite Monkey Cage. But the threat of Spotify, Apple Music and now YouTube Music still looms. What, if anything, should the BBC be doing to counter these apps? With BBC Sounds, the organization may have finally found its answer.

The new iOS and Android app, available today, will eventually replace iPlayer Radio. At its core, the service is still a hybrid radio and podcast player. The broadcaster, however, is changing the way it surfaces content to better match the experience found on major streaming services such as Spotify. There are Collections, for instance, with labels like Funny Chat, Upgrade Your Life, Live Sessions and Dance Mixes. The app has categories, too, including hip hop, classical, crime and science and technology. All of these contain a mixture of hand-picked podcast and on-demand radio. These labels are similar to the genre tags in Apple Music and other music-streaming apps. Instead of a traditional playlist, though, the BBC is offering a selection of highly targeted shows. The broadcaster doesn't have the licensing deals to offer true track-by-track control -- so you can't skip a song like you would in a Discover Weekly playlist -- but it can aim for a similar level of curation and personalization. "Those editorial buckets," Ben Chapman, Head of Digital for Radio at the BBC explains, "allow us to surface a lot more content than perhaps we would have done otherwise."

The app will track your listening habits and suggest shows in a new Recommended for You section. "We want to provide lots of different routes in," Dan Taylor-Watt, Head of BBC iPlayer said. "For some people, genre will be the thing they care about, and for other people, it will be the mood they happen to be in at the time. But also, a big focus is on how you then subsequently introduce them to something else. Which goes to the heart of what the BBC is about, and its 90-something years of curating audio." You can bookmark shows and clips for a Pocket-style inbox called My List, or subscribe so future episodes appear in a personalized feed called My Sounds. Of course, you're only getting content produced by the BBC -- so don't expect 99% Invisible to appear anywhere -- and you can't save an album like you would on Spotify. These restrictions, though, line up with the BBC's mission to promote and support UK talent. "We're here to showcase the best that the UK's got, creatively," Chapman said. "The big global players don't always do that. Obviously, they invest in our market, but the BBC's job is to really lift that up and reflect back our own society."

The new app is a more user-centric approach to programming and distribution. Lots of people want running playlists, so why not index and promote a radio show that serves the same purpose? The container for the music might be different -- a show with some occasional DJ chatter, rather than a playlist -- but the tracks and total length can be roughly the same. And if lots of people are demanding a specific mood or genre, the BBC can commission a new radio show or podcast to match. "This is a perfect opportunity and we would be mad not to lean into that," Chapman hinted. If you love live radio, fear not: All the BBC's local and national stations are available through BBC Sounds. The variety, of course, dwarfs the single Beats 1 station available through Apple Music at the moment. The BBC also has a wealth of video produced by its radio, TV and editorial teams. Video has become a crucial battleground as music-streaming services try to differentiate from one another. The broadcaster, in this regard, already has a huge advantage over its younger rivals. And it can make those interviews and live-lounge sessions exclusive to Sounds, should it want or need to.

Then there's the price. BBC Sounds is free to use (though funded, of course, by the controversial licence fee) in the UK. There are also zero ads, unlike Spotify's free tier. For those sick of being up-sold a subscription, or want to pare back their monthly outgoings, this could be attractive. The trade-off, of course, is granular control over the music you're listening to. The BBC can tailor its shows to your tastes, but ultimately you're bound by whatever track list their DJs or researchers have selected. You might find that lack of freedom, though, is still preferable to sporadic Spotify ads.

"We're here to showcase the best that the UK's got."

BBC Sounds is more than a redesign of iPlayer Radio. It's a major shift in how the BBC wants to recommend and distribute its audio-based programming. The app doesn't, however, change the company's basic operations. For now, it seems, the organization has no interest in licensing music similar to Spotify. And it has no interest in closing any of its radio stations. For some, that will be a disappointment, given the BBC has hinted at a truly on-demand music service in years past. But it's an approach that feels more in line with its budget and public-service responsibilities.

Will that be enough to claw Brits back from Spotify and Apple Music? Probably not. But the new app should make it easier for people to pick up their phone and find something BBC-related that fits their mood. For many, I suspect, it will become a complimentary service to their go-to streaming app. In the fight for people's time and attention, that's a start, at least.

In this article: audio, av, BBC, BBCSounds, gear, internet, podcasts, radio, services
All products recommended by Engadget are selected by our editorial team, independent of our parent company. Some of our stories include affiliate links. If you buy something through one of these links, we may earn an affiliate commission.