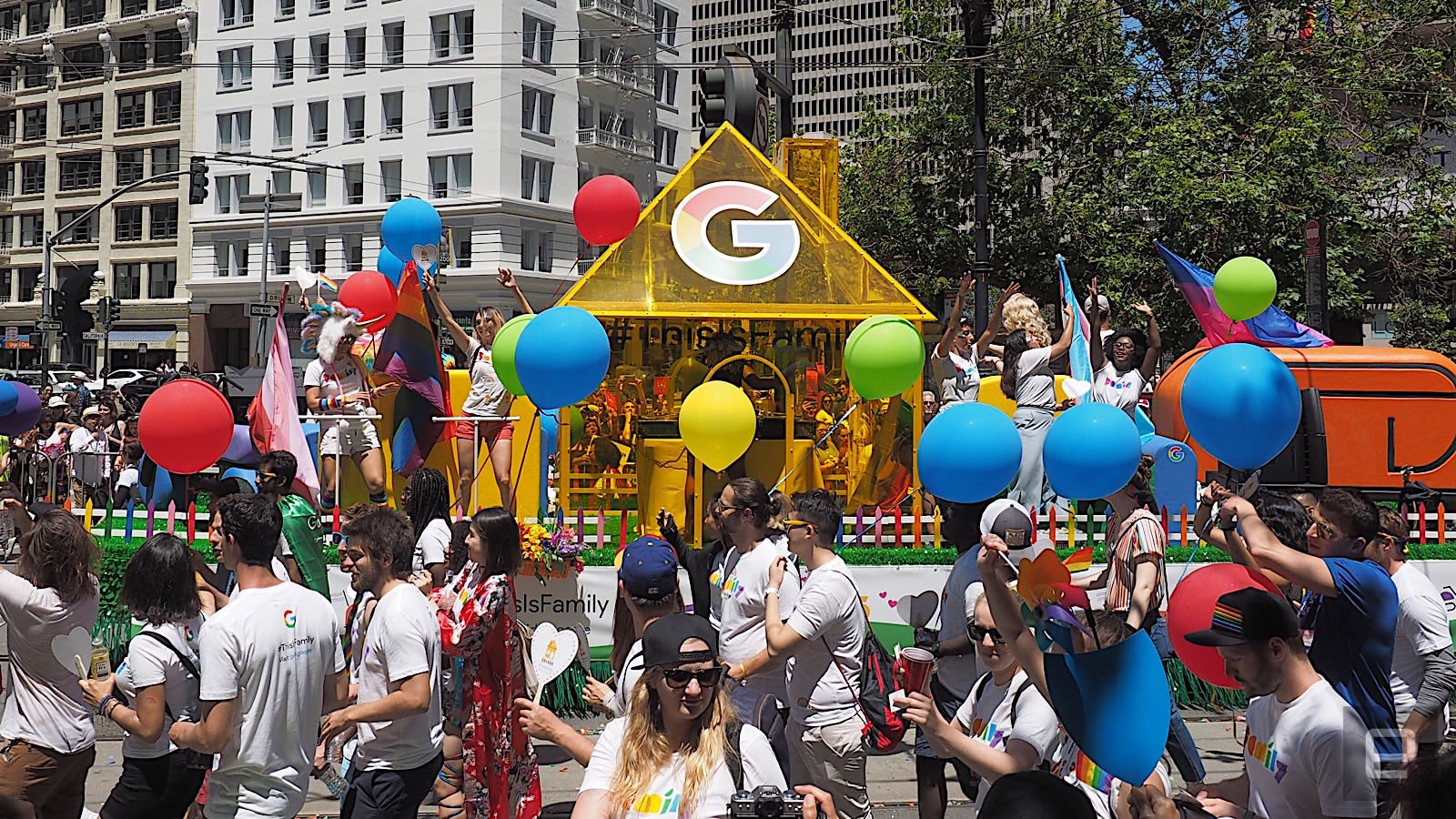 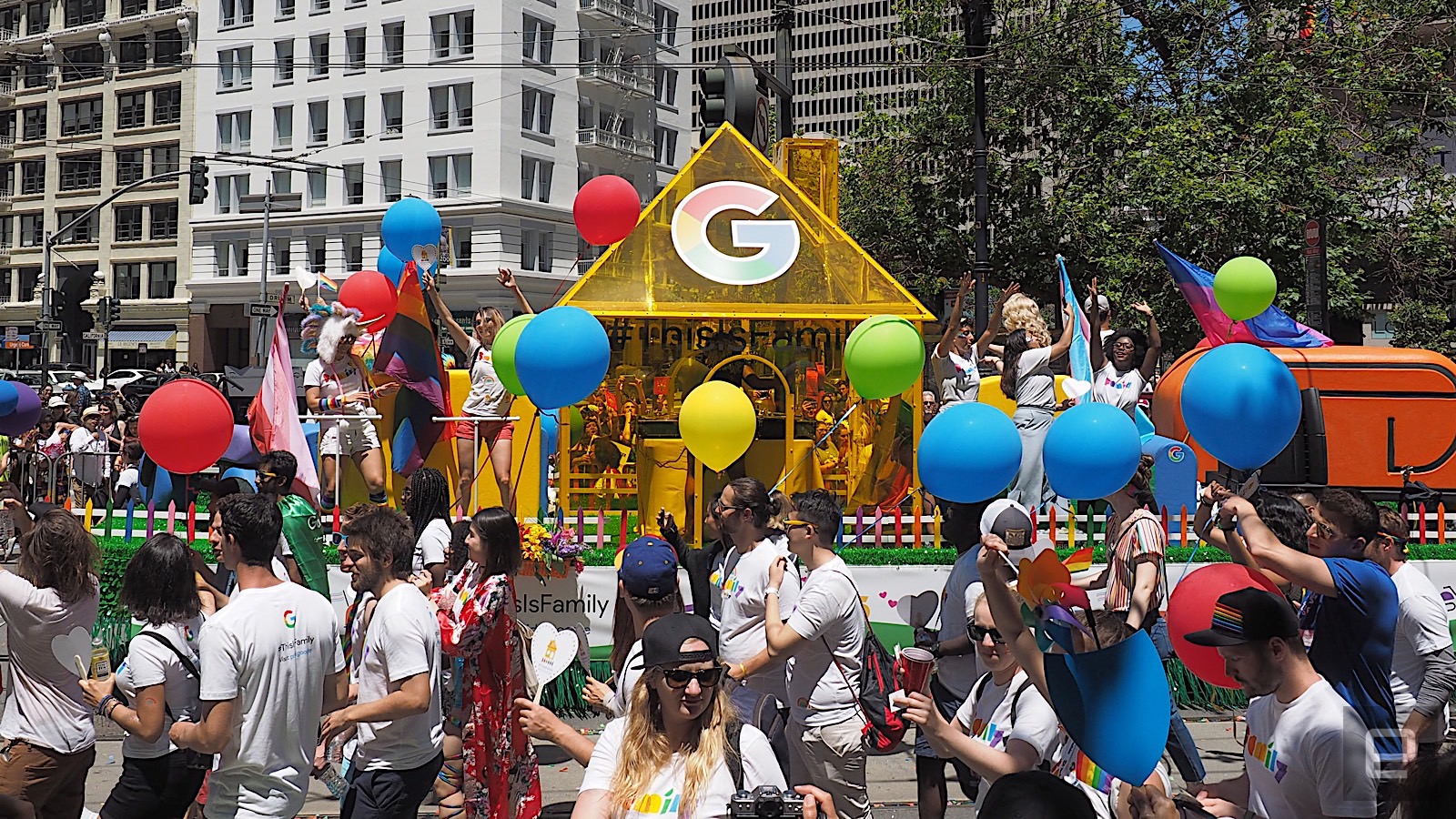 "Oh look, that's Google!" screamed a young woman behind me just as the company's iconic logo came into view at the corner of Market and Spear Streets -- the very start of San Francisco's annual Pride Parade this past Sunday. Behind it, hundreds of Google employees holding multi-colored balloons, decked out in T-shirts that read "Family" on the front. On the company banner was "pride.google," a landing page that promotes the #ThisIsFamily hashtag. Google says it "honors the unique tradition of LGBTQ+ family structures," and points to non-profit organizations like GLAAD, PFLAG, and the It Gets Better project.

Google wasn't the only tech company at the Pride Parade this year; Apple was there in force, as were Amazon, Netflix, Uber, Facebook and many others. Each float was full of employees decked out in colorful gear, dancing and waving the rainbow flag. Yet, not every company has a positive record of dealing with the LGBTQ community. In fact, some have been downright damaging.

Facebook, for example, has a long history of insisting that you use a real name, which disproportionately impacts the LGBTQ community. Some want a separate, private Facebook account, others prefer to use their chosen name as an integral part of their identity. The company has gotten better at this -- it now accepts different kinds of documentation to prove who you are and it's more open to appeals -- but critics say that the overarching real name policy can still be used to harass people, forcing them to reveal their legal name or leave Facebook altogether. 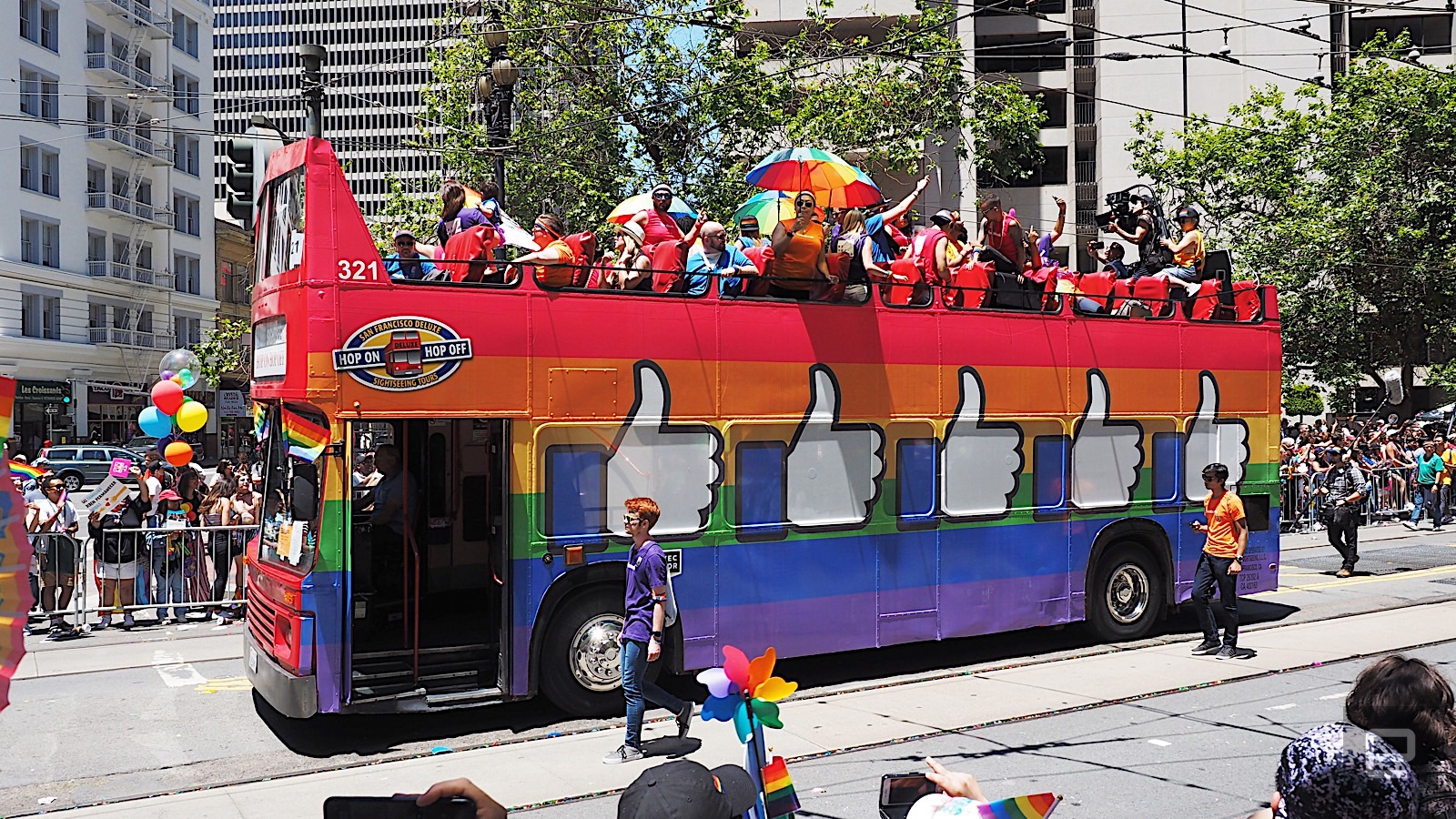 While Google is known as one of the more LGBTQ-friendly companies -- there's an internal "Gayglers" group with 50 chapters around the world, plus an annual Trans@ conference dedicated to transgender issues -- its services haven't always been kind to the community. Recently, for example, popular transgender YouTuber Chase Ross reported that, for the past year, his videos have been repeatedly age restricted by online trolls and demonetized for having content that was deemed "not advertiser friendly."

"Two months ago, 21 videos in three days were age-restricted," Ross told Engadget. "I appealed every single one, and they were all denied." While flagging a video for age-restriction can be done by the public, demonetization is often at the hands of an algorithm.

"I found out that adding the word 'trans' actually demonetized the video automatically," he said. "My five years post-op top surgery video was demonetized, and I just couldn't believe it because I'm literally just talking about how happy I am." On top of that, he discovered that anti-LGBTQ ads from the Alliance for Freedom (which the Southern Poverty Law Center has defined as a hate group) were running on a few of his remaining monetized videos.

YouTube responded to the complaints and denied that it has a list of LGBTQ-related words that trigger demonetization. "We are constantly evaluating our systems to ensure they are enforcing our policies without any bias," a spokesperson told The Verge. "We use machine learning to evaluate content against our advertiser guidelines. Sometimes our systems get it wrong, which is why we've encouraged creators to appeal." 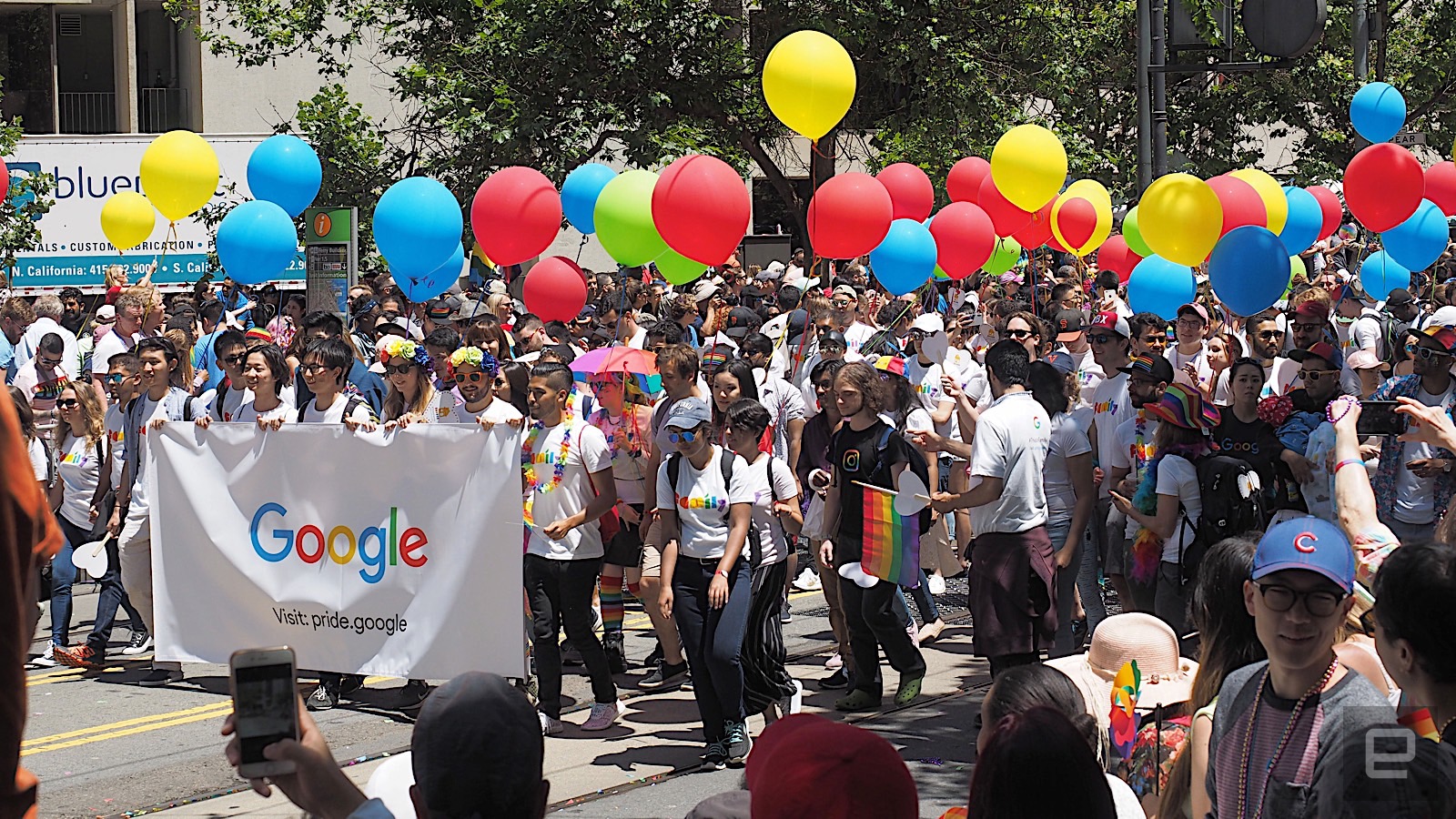 "But why is that on us?" said Ross. "This is Pride month, and YouTube prides itself on being so inclusive, yet it lets anti-LGBTQ ads on their platform?" Plus, thanks to constant harassment, he has a strike on his account from a video that's five years old, which he says puts his account in danger of being deleted. We reached out to YouTube to see if it made any changes since this complaint but simply received the same statement as above.

Ross understands it's not people who do this, and that it's the algorithm and automated flagging systems. "I don't think YouTube is transphobic or anti-LGBTQ at all," he said. "I just think that these things have been happening for over a year to a lot of creators, and no one at YouTube is paying close enough attention." It's not just Ross either, YouTubers like Gaby Dunn and Elijah Daniel have also complained about these anti-LGBTQ ads on their channels.

"LGBTQ youth are three times as likely to be harassed online and nearly 60 percent have read something negative about themselves on the internet," said Chris Wood, the executive director of LGBT Tech in an op-ed in the San Jose Mercury. "And despite its massive profiling and surveillance capabilities, the tech giants seem unable or unwilling to do anything meaningful about this problem."

Engadget reached out to various tech companies about their LGBTQ policies and their involvement in the Pride Parade. Only Google responded with a link to this blog post that expounded on how it's celebrating Pride by adding rainbow easter eggs and helping people find LGBTQ-friendly businesses on Google Maps. 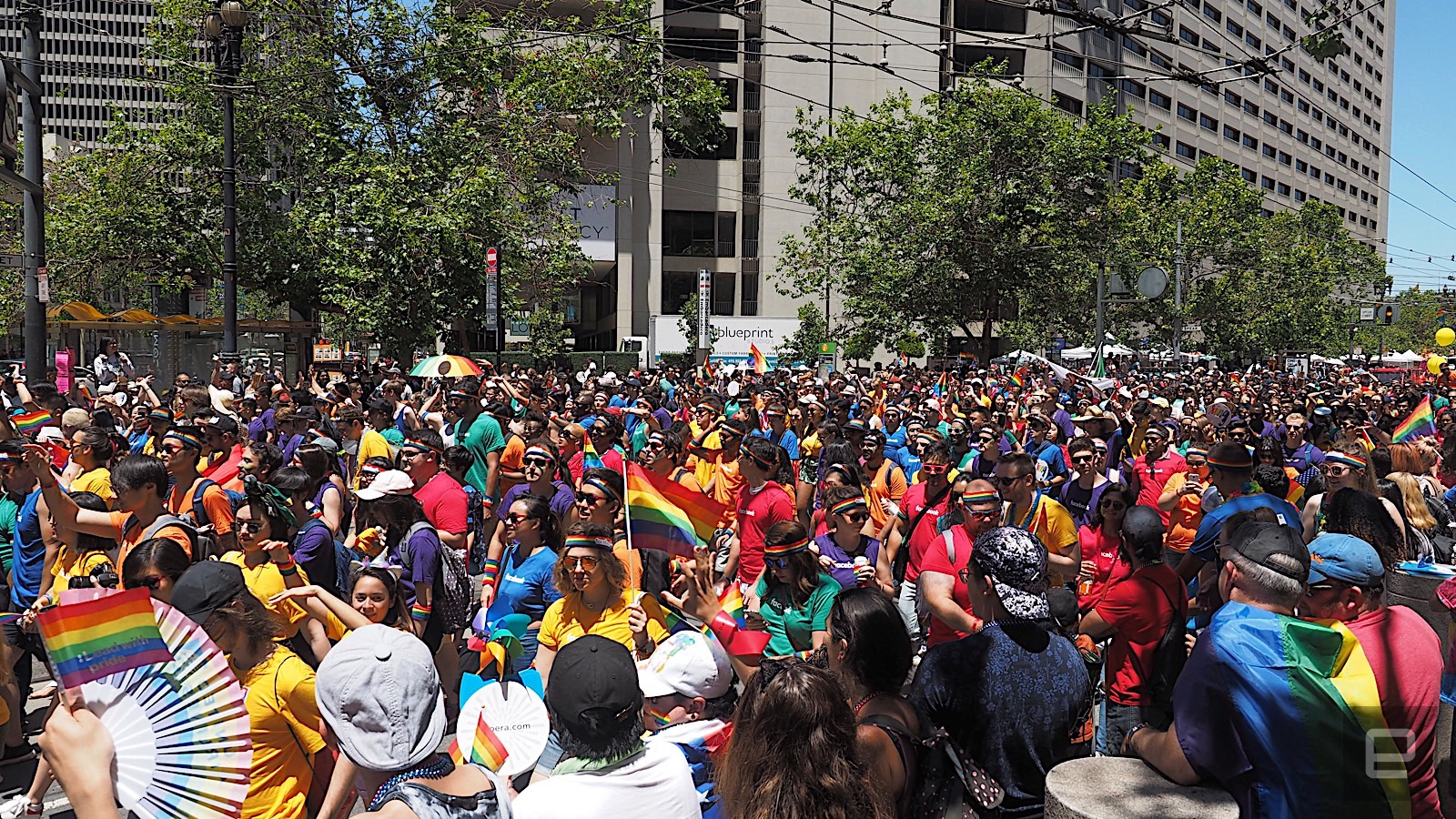 One of the reasons why this is such a sticking point for the LGBTQ community is that the web is more than just a place for memes and GIFs to them; it's often a lifeline. "The internet allows LGBTQ people to form communities that might not be safe in real life," Jim Halloran, the chief digital officer at GLAAD, told Engadget. "It gives them access to vital life saving information like HIV and AIDS, safer sex, self care, and allows them access to role models that they might not see in traditional media."

The issues that plague the LGBTQ community in the real world have followed them to the digital space. Online trolls are constantly targeting LGBT people and content, Halloran said, and it's not just on social media spaces like Twitter and Facebook. Sometimes, they can even get them banned or silenced, like in the case of Ross's YouTube channel.

GLAAD experienced something similar when it posted a video of Debra Messing that received thousands of comments full of hate speech after the video was linked in an alt-right sub-Reddit. "They were trying to get our video taken down," said Halloran. "It would've gotten a strike against our YouTube account, which would make it harder to upload additional videos."

Halloran added that a lot of these coordinated attacks happen with such sophistication that LGBTQ content is often a hairline trigger for removal. "We've seen LGBT content blocked or censored on every major social network platform in the past year." 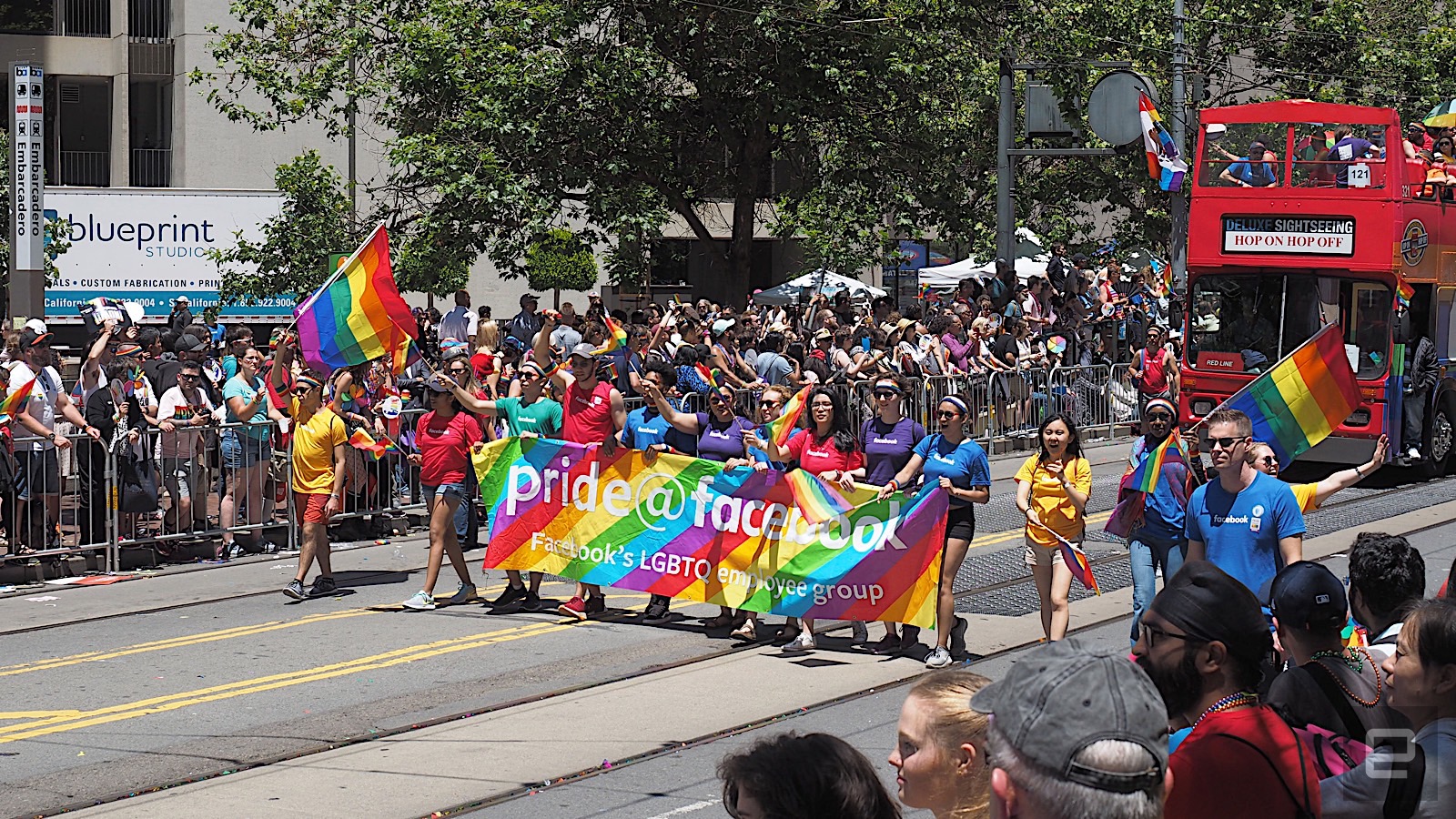 Since then, GLAAD worked with Alphabet's Jigsaw, which developed a machine learning tool that identifies the likelihood that a phrase will draw harassment and attention online. Phrases like "He is a white man" only had a 17 percent toxicity rating, while something like "She is gay and black" was perceived as an almost 100 percent toxic thing to say online.

"The way AI is being built is scraping content from the internet and using that to train it," said Halloran. "The problem is that the internet is also home to homophobia as well." The problem is when companies use this raw dataset without working with communities that are impacted by it.

That's one of the reasons GLAAD launched a digital task force earlier this year, to work closely with tech companies on these very issues. They formed a collaboration with Jigsaw to build LGBTQ-inclusive datasets that companies can use to build their algorithms, for example, and have helped companies like Tinder and Match to include expanded gender options in their dating apps. More than that, Halloran said that GLAAD is in constant conversation with companies like Google and Facebook on how to make their products safer for the LGBTQ community.

"By no means are the problems fixed," said Halloran. "But these are steps in the right direction."

In this article: demonetization, facebook, gear, google, internet, lgbtq, youtube
All products recommended by Engadget are selected by our editorial team, independent of our parent company. Some of our stories include affiliate links. If you buy something through one of these links, we may earn an affiliate commission.