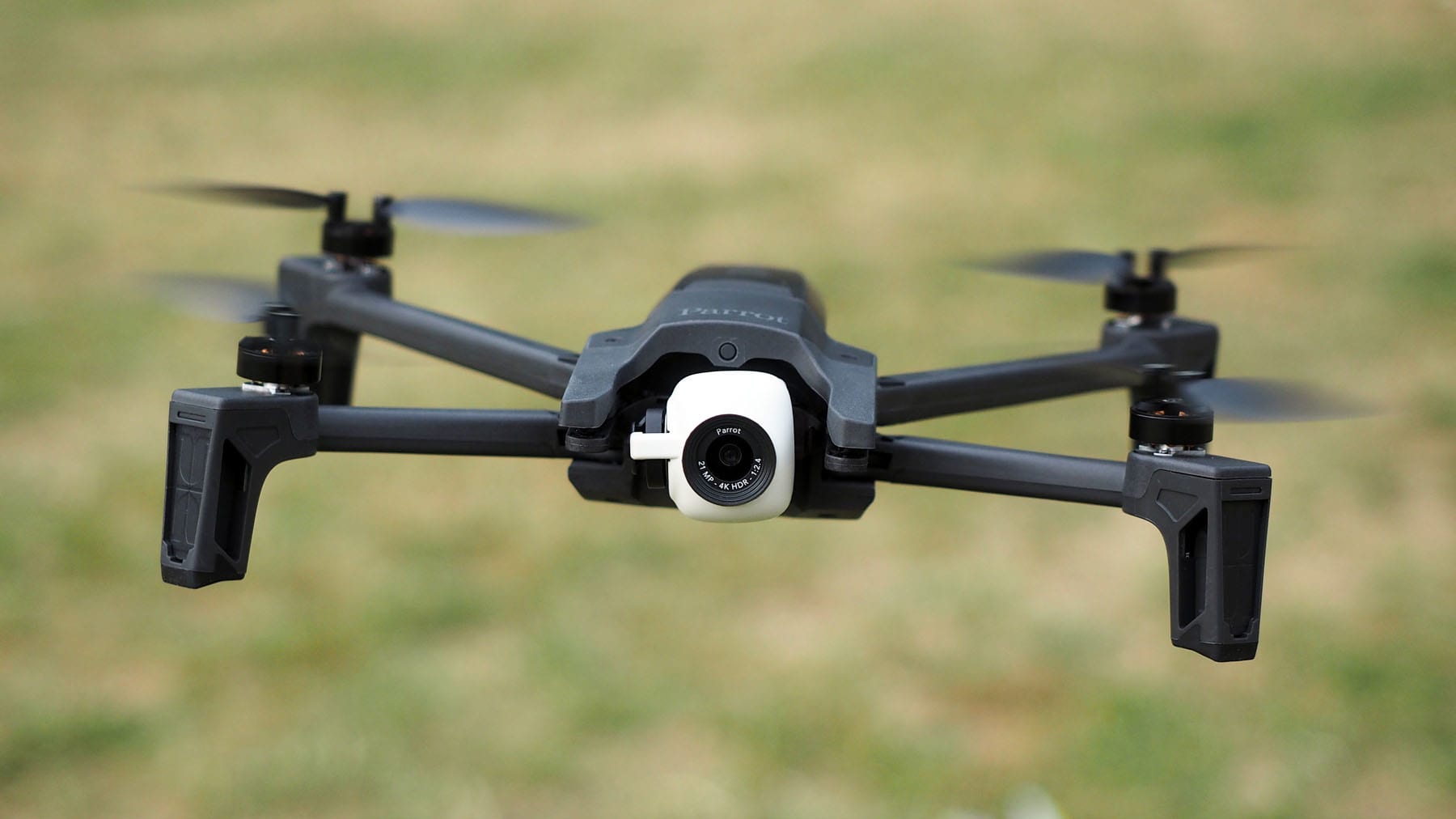 Drones come in many shapes and sizes. At their most affordable, drones are fun flying toys. And for industrial uses or professional filmmakers, you've got specialist machines that can run well into tens of thousands of dollars. Parrot's new $700 Anafi falls somewhere in between, balancing a decent camera and plenty of features with a price tag that isn't prohibitively expensive. DJI is the dominant player in drones right now. From the $99 Tello to the $20,000 Inspire 2 Cinema Premium, it's got work and play covered. Parrot, on the other hand, is supposed to be in something of a transitional period. Last year, it shed some staff and began moving away from consumer drones towards those built for specific business applications. But now we have the Anafi, which arrives just half a year after DJI's Mavic Air, a similarly portable $799 quadcopter that's serious about aerial photography. 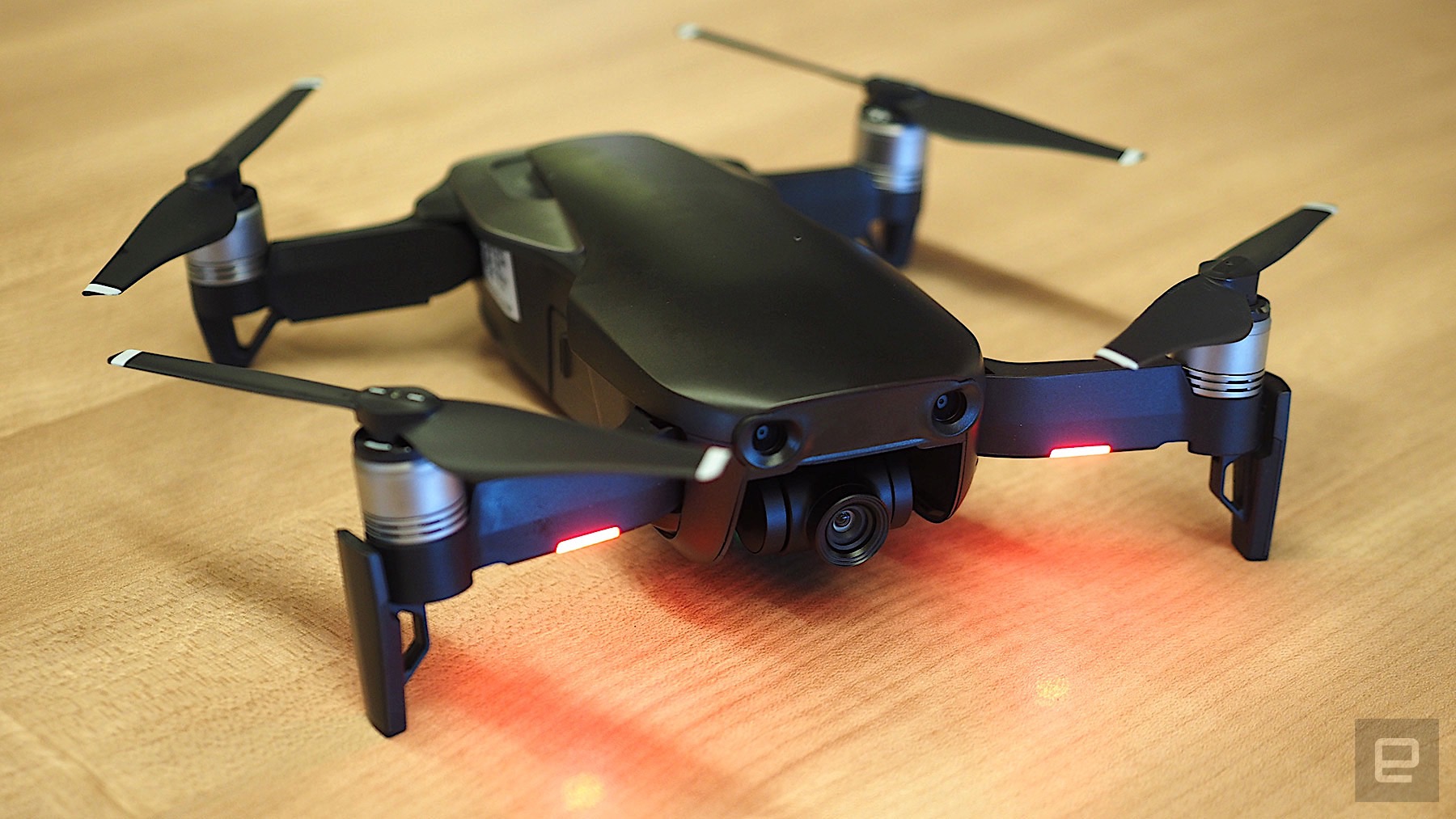 Given I've played around almost exclusively with toy drones in the past, I was keen to try the Anafi -- something with a more serious slant I could never justify buying for myself. I pulled it out of its neat little carrying case, delicately unfurled its arms and plugged it in for the initial charge. The Skycontroller 3 that comes with it looks a little bulky and cheap by comparison, but in use it turned out to be a well-balanced, solid and responsive pad, and that's what you want.

Ahead of my first flight, I was pretty overwhelmed by the myriad settings and features in Parrot's FreeFlight 6 app. You can tinker with so much, from the control scheme to UI appearance, top speeds on every axis, maximum altitude, and so on. Then there's all the different piloting modes, pre-programmed shot types and camera settings. If I had a specific video project in mind, I'm sure that, with trial and error, I'd get the footage I was after -- and that's the whole point of this kind of drone. It's not a toy, it's not quite a pro filmmakers' tool, but something for the semi-serious videographer. 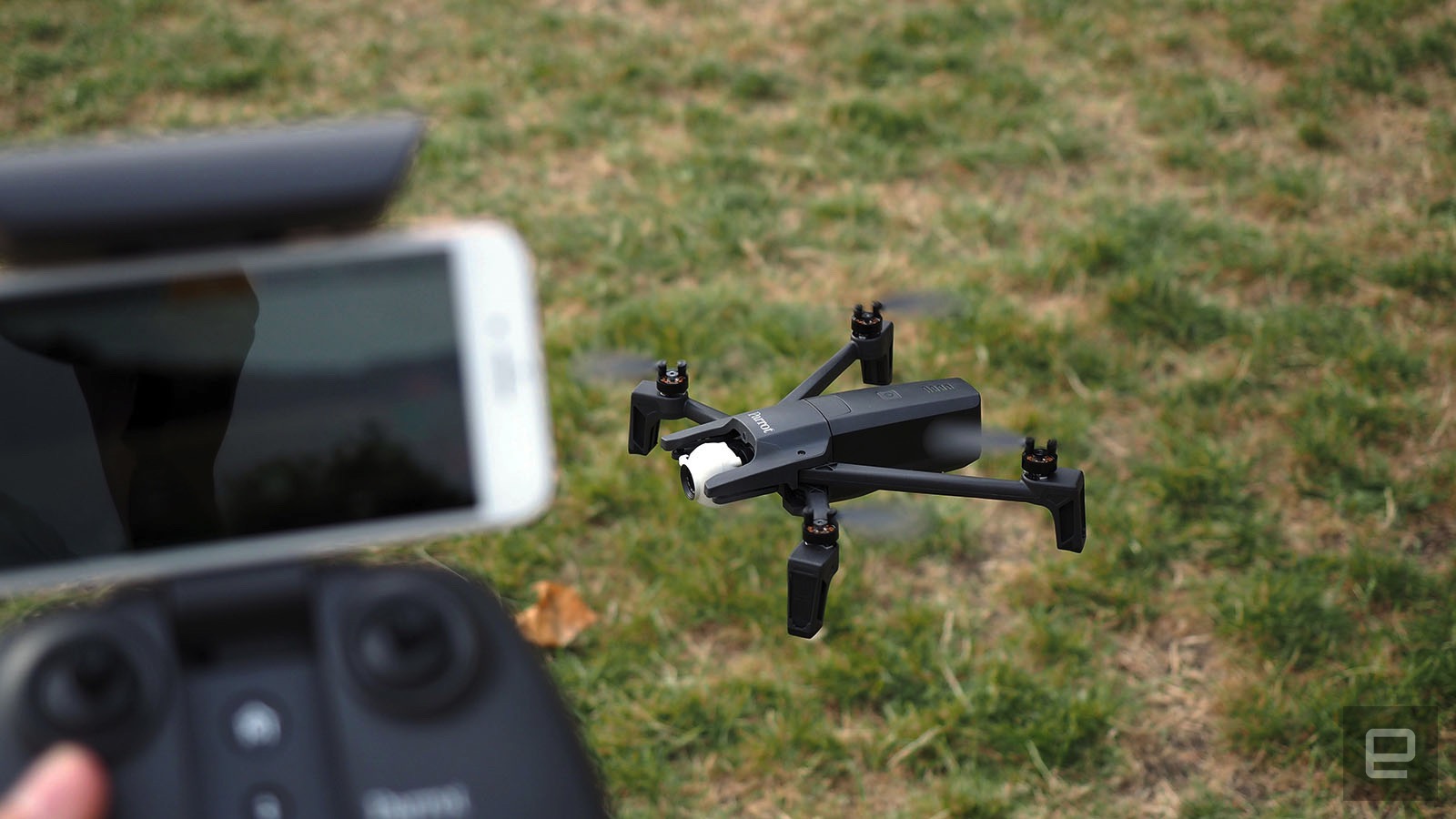 Perhaps that's why I went from gadget-giddy to a tad bored over the course of about 20 minutes, after getting relatively comfortable with the controls and moving from the slower Film preset to the nippier Sport mode. It's a portable flying 4K camera after all, with several unique features intended to turn your head away from the DJI's Mavic Air and in the direction of the Parrot Anafi. In other words, it's not really supposed to exist simply to entertain a drone-starved editor. 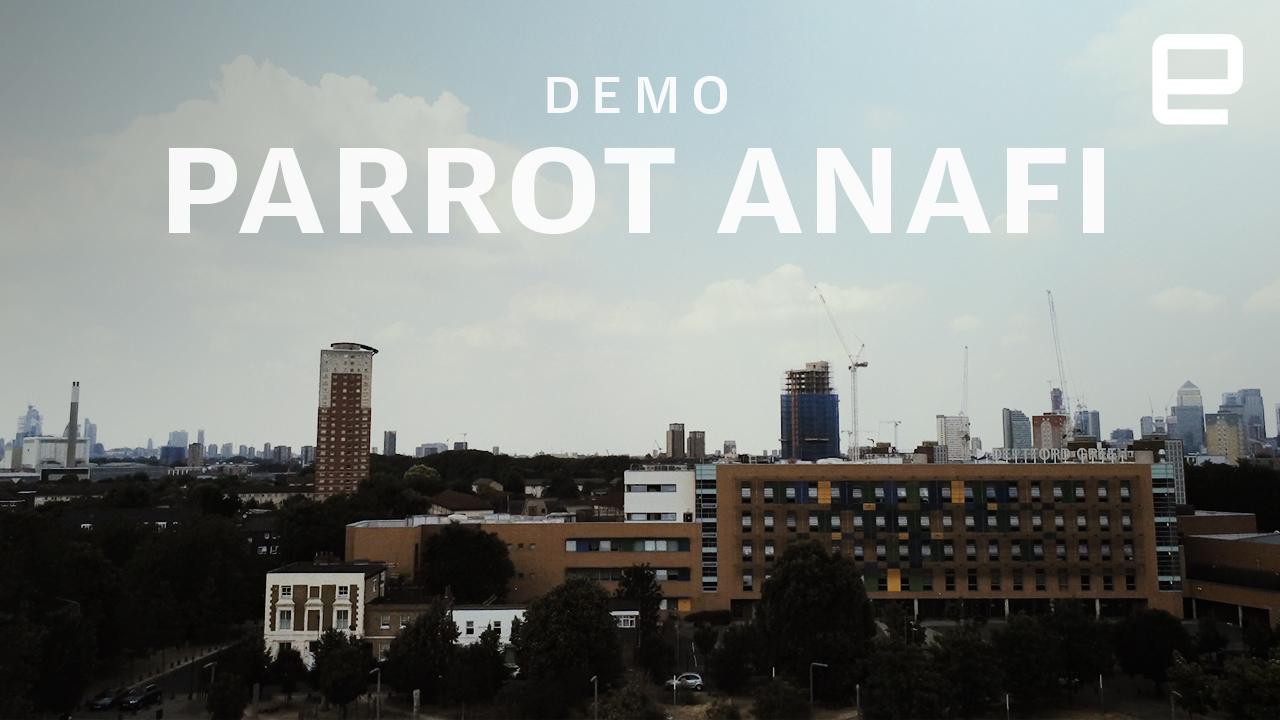 One of the Anafi's special features is the ability to record 4K HDR footage. Regular 4K clips are appropriately detailed, and the three-axis stabilization system does exactly what it's supposed to, ensuring the buttery smoothness that's basically the hallmark of drone footage. The camera gimbal deadens horizontal and vertical tilt, while digital stabilization provides extra leeway when the drone's in motion. I haven't encountered any telltale signs of digital stabilization at work, such as obvious cropping or warped perspectives.

Color saturation and automatic exposure leave something to be desired, however (I was definitely using the natural setting in case you were wondering, not the intentionally flat mode editors would add color to in post-production). 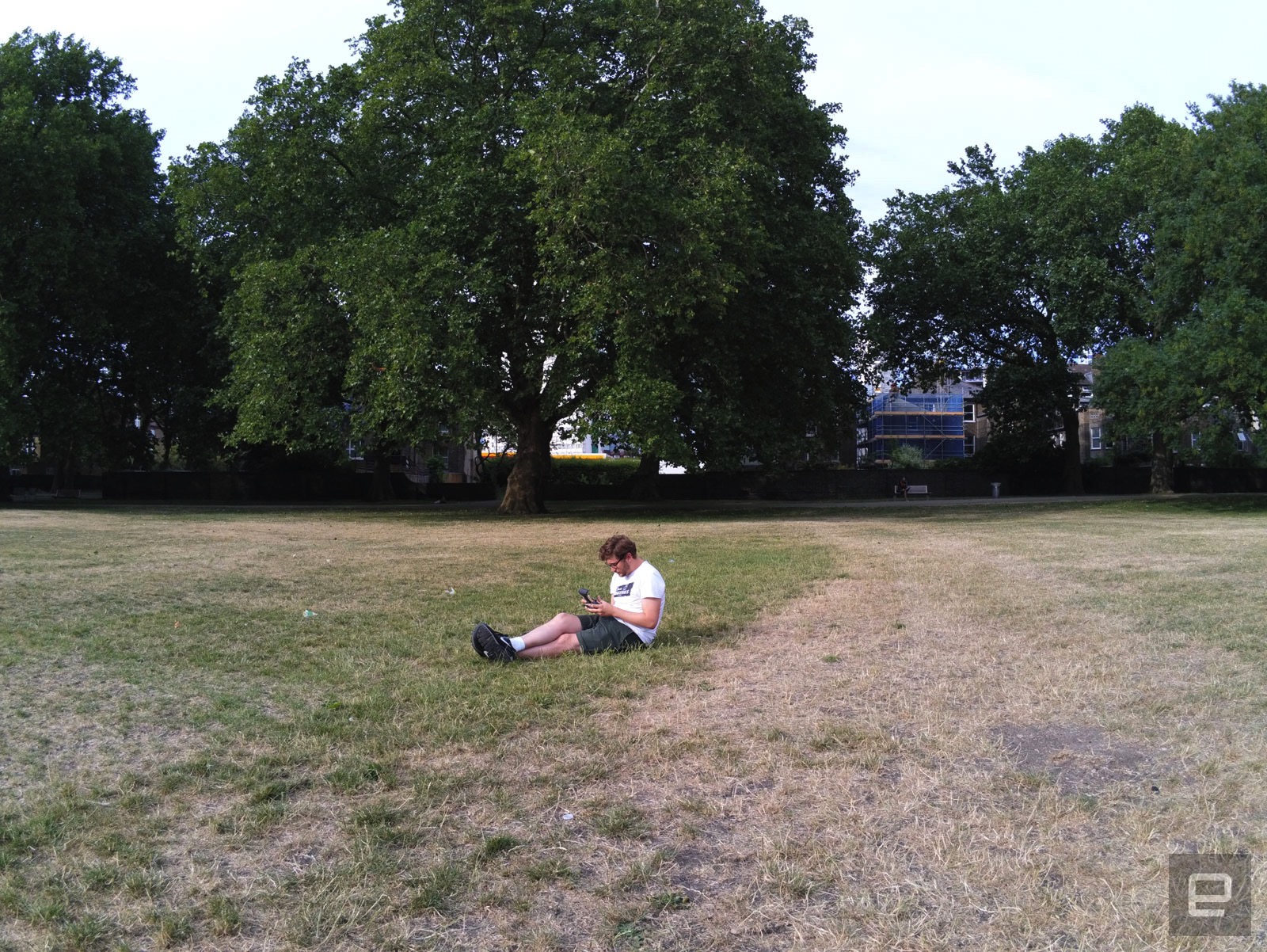 You can adjust exposure, ISO and all that manually, of course, but I'm not overly impressed with the automatic output. The 21-megapixel stills you can shoot on the Anafi are much more balanced in these regards, though.

HDR is supposed to be a good thing. Higher contrast and colors with a little extra pop. Not so much on the Anafi. Lighter colors end up looking washed out, but what's far worse is turning on the HDR setting introduces a bizarre level of noise. The graininess is palpable. I really don't understand it.

Another of the Anafi's more unique features is that the camera can point directly down and directly up. I can totally see how this could be used to create some interesting shots, even if I haven't executed any personally. Filming a plane flying directly overhead, for example -- maybe with some treetops in the shot for added texture.

The Anafi also boasts a digital zoom feature that doesn't have you sacrificing clarity. Thanks to some oversampling trickery, you can zoom in up to 1.4x at 4K and 2.8x at 1080p without losing pixels. The Anafi's 21MP sensor actually shoots at 5,344 x 4,016, which is where the buffer comes from. This feature works exactly as described, but it's worth noting the speed at which the camera zooms in (read: but not out) is very slow -- around 0.1x per second, which limits its utility somewhat. 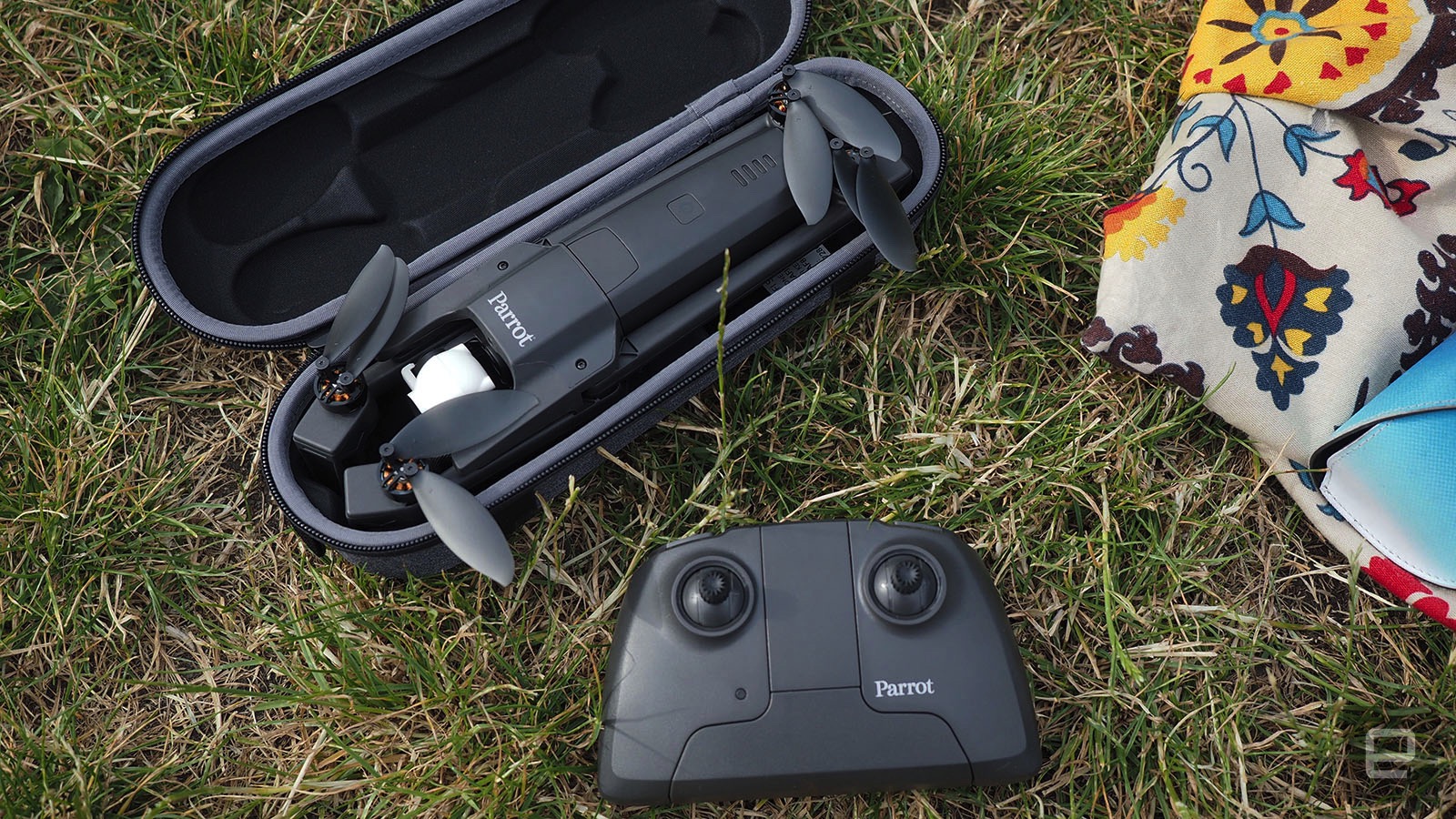 Aside from these features, you can see why the Anafi sits around the $700 mark: The build quality, the robust controller, the carrying case, the spare propellers that come with it. It's really light, portable and maneuverable. The drone's design is based on the anatomy of flying insects, the folding arms looking almost like limbs and wings. These extremities feel like they strike a good balance between rigidity and flexibility, but I imagine the Mavic Air's squatter frame and shorter arms make it more robust where serious crashes are concerned.

Parrot also calls it the "quietest drone in its class," but it's by no means silent. At lower altitudes, you can hear its low, consistent hum. This is going to sound strange, but the frequency attracts bees. At least the bees in my neck of the woods. Whether in interest or aggression, bees congregate around it and, unfortunately, one by one, they get shredded by the Anafi's propellers. Weird (and messy). 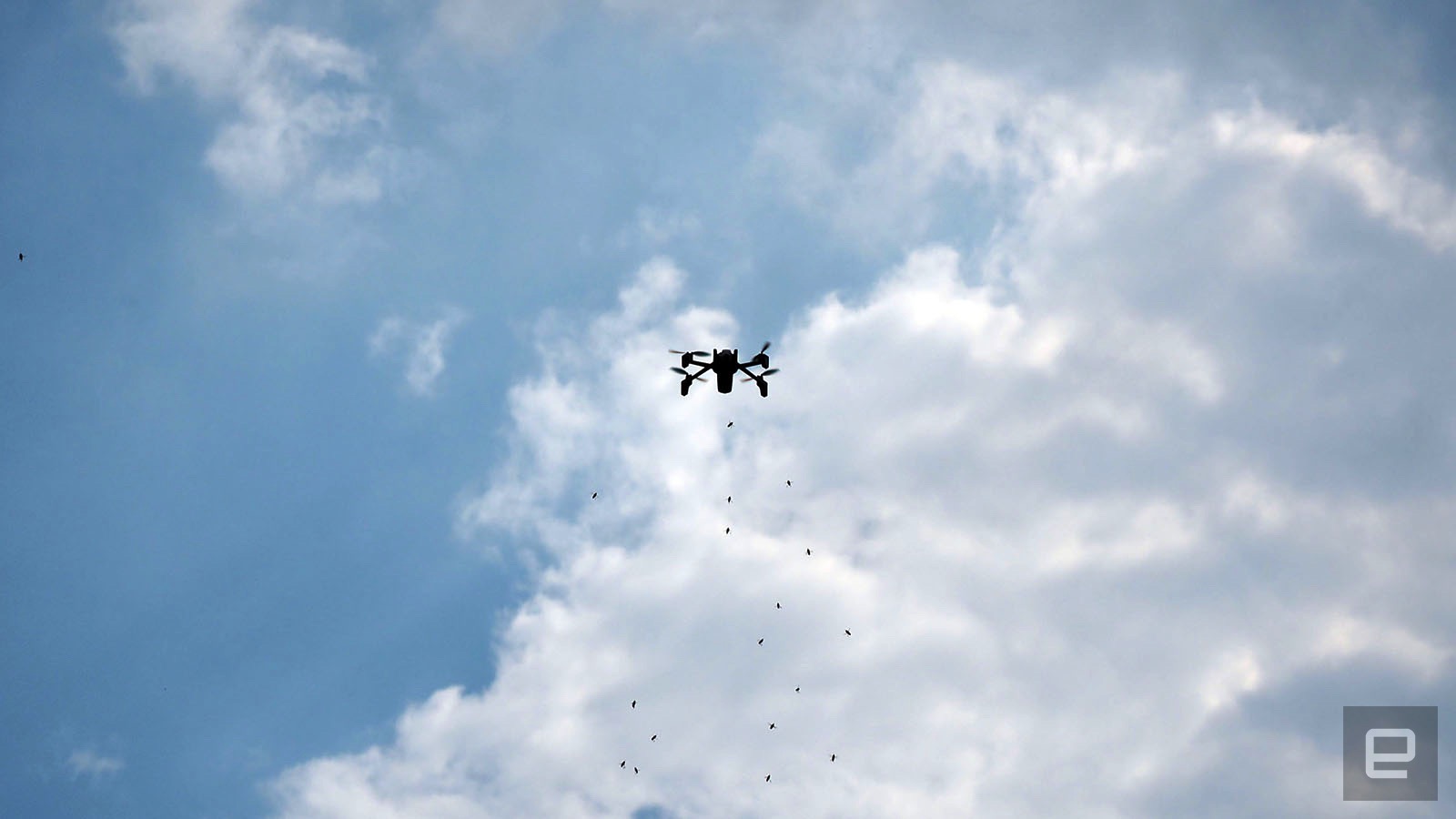 The Anafi's flight time clocks in at 25 minutes, according to Parrot -- that's four minutes more than the Mavic Air (and two less than the Mavic Pro). I haven't timed it exactly, but I'm pretty sure I've had it in the air longer than 25 minutes total. Probably because I've been poking around in the app, and it's more efficient when it's just hovering. It takes a good few hours to recharge the battery via USB-C, but you can buy extra batteries for $100 a piece should you need any.

There are several things to like about Parrot's Anafi, but plenty of shortcomings, also -- and I'm not just talking about the grainy HDR footage. It lacks any onboard storage, for example, though you do get a 16GB microSD card in the box. The microSD card tray that sits under the battery is really flimsy, too. It's one of those slide-and-lock affairs with a little hood on a hinge. I pulled the battery out once, and the bit of metal that secures the card went flying. I managed to find it in the grass around my feet, but had I lost it, I would've been fairly screwed. 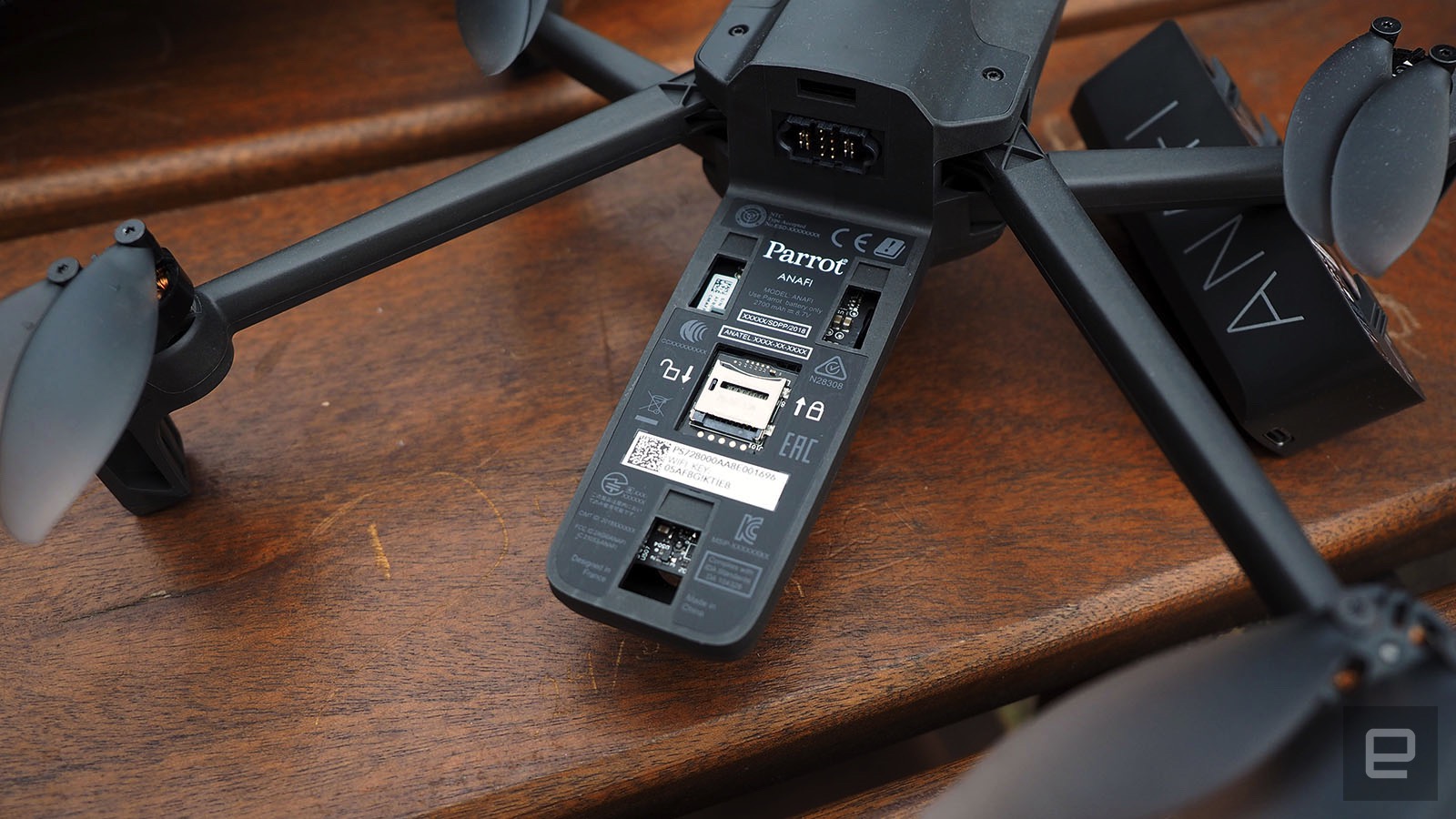 Also, if you forget a Lightning or USB cable to plug your phone into the Skycontroller, you just have to make do. Your phone's touchscreen doesn't have anywhere near enough real estate to replicate all the sticks and buttons of the controller, and you're working with a significantly reduced range that means you have to be within literal spitting distance to pilot it manually. You can't just use the Skycontroller, by the way. Your phone is a necessary part of the equation.

I've had the drone fail to start up correctly a few times, as well as a few connectivity issues. The FreeFlight 6 app for iOS was still technically in beta until a few days ago, however, so I'm not too bothered about having to delete and reinstall it just the once to resolve a pairing problem.

If there's one thing that's really rubbed me up the wrong way, it's that you have to buy a couple of features through in-app purchases. Both the follow-me mode and flight-plan mode, which lets you create flying routes the drone will follow autonomously, are $18 each. Spending $700 on a drone and having to pay another $36 to unlock all its features is nickel-and-diming, plain and simple. 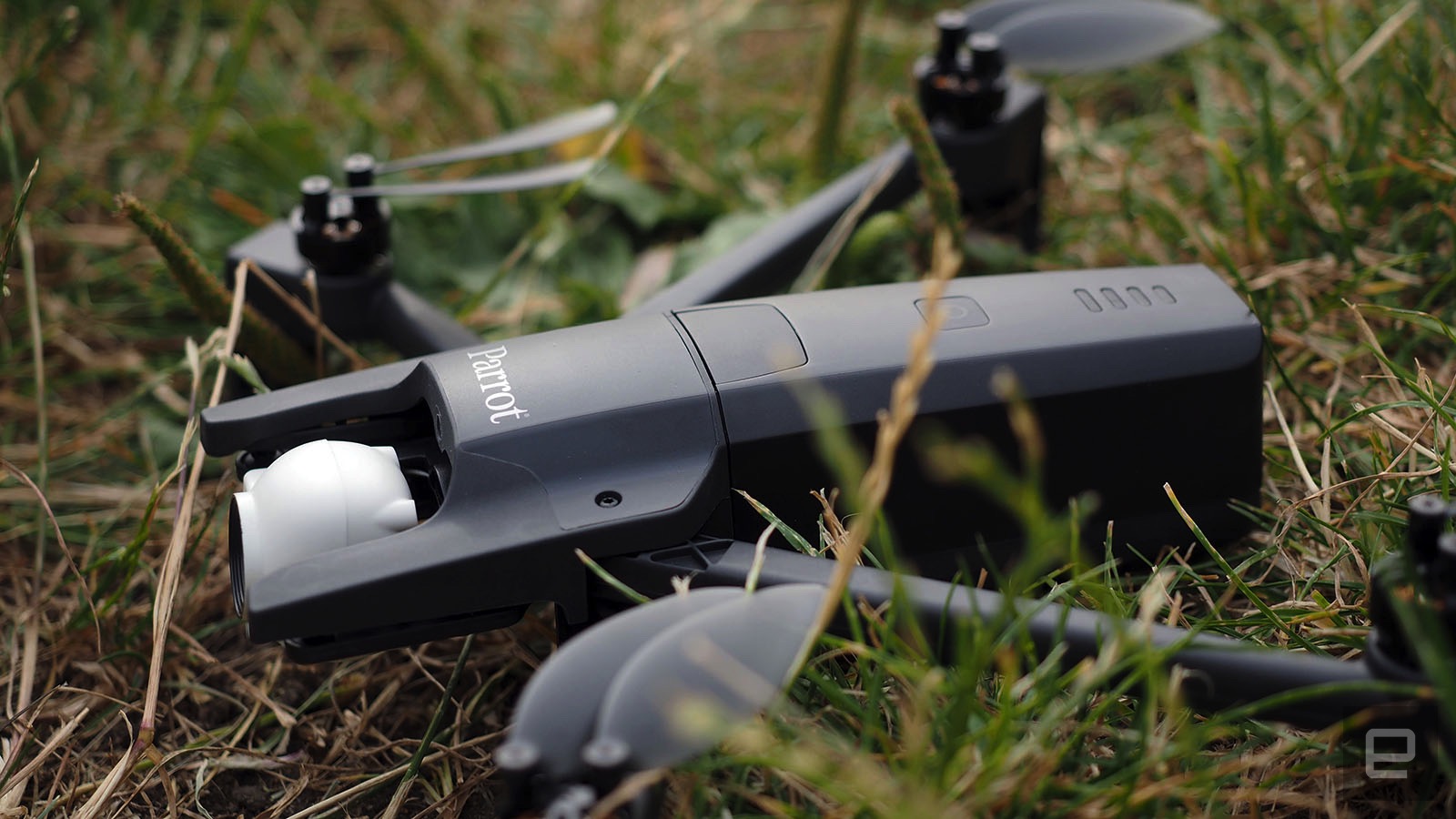 “Spending $700 on a drone and having to pay another $36 to unlock all its features is nickel-and-diming.”

Ignoring the cost, I did get on relatively well with the follow-me mode. You draw a little box on your smartphone screen to select your subject and away you go. I had it following me, of course, which it did smoothly and steadily. You can also add manual controls into the mix for different perspectives. Usher the drone too close to your subject or the ground, however, and it can freak out, flying erratically as it tries to obey your commands while also attempting (but often failing) to keep a safe distance.

You can easily survive without buying the follow-me mode. The cameraman mode is pretty similar: You select a subject, and the lens stays trained on them, but any movement on the drone's part has to be done manually. The pre-programmed smart, shots such as the 360-degree or parabolic pans, are free, too. 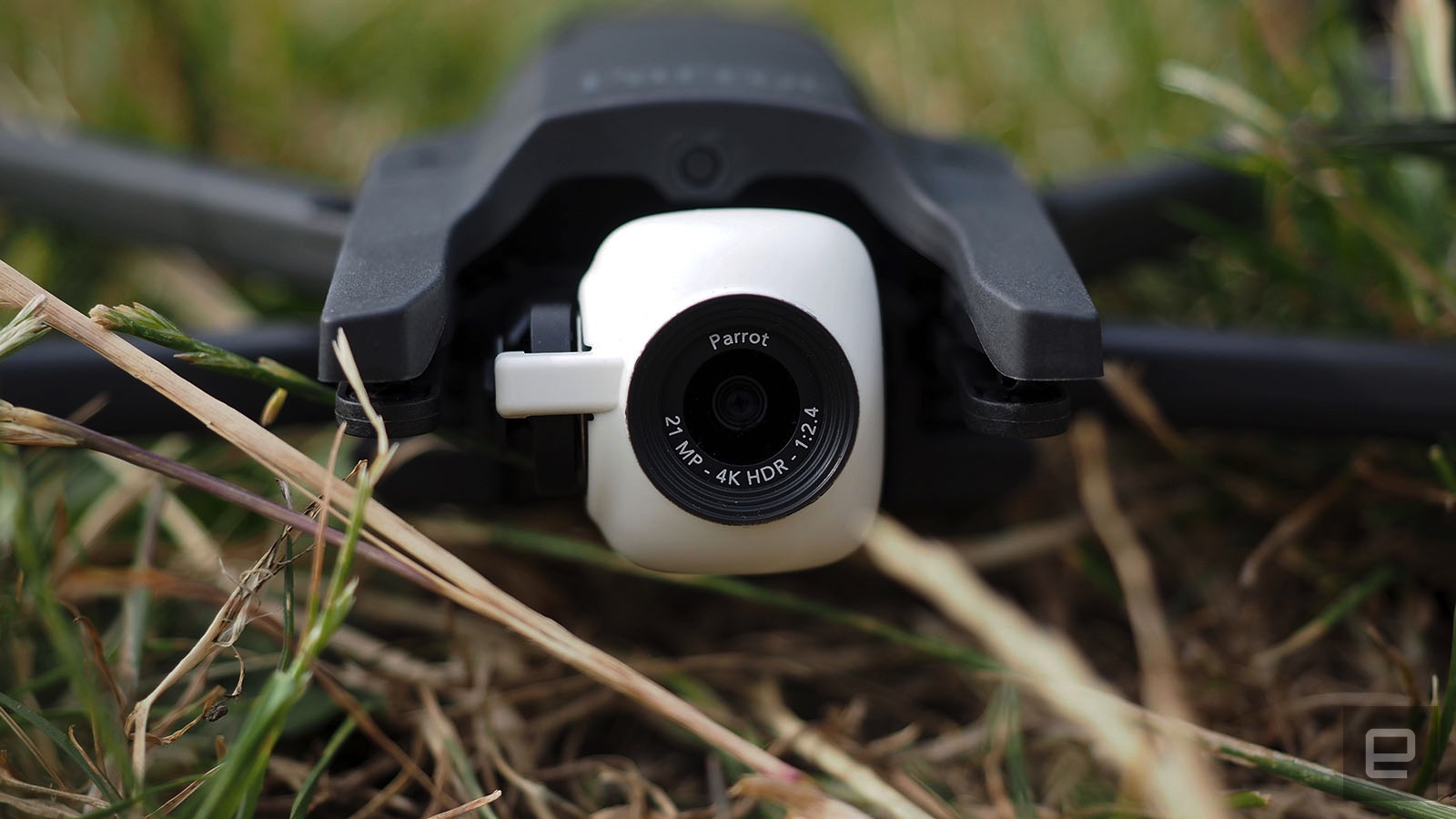 Anyone with their eye on a flying 4K camera could do worse than the Parrot Anafi, but there's one thing the Mavic Air does better: obstacle avoidance. The Anafi has a lone, bottom-facing sensor that stops you from slapping it on to the ground (landing is an automated maneuver). The Mavic Air, however, also has an array of perimeter sensors to stop you accidentally flying it into trees, people, etc., but it also means you can use the drone's follow mode without worrying about these kind of collisions, too. Bearing in mind I've been testing the Parrot Anafi in London parks, with trees and people and people sitting under trees, I've pretty much always been on edge. By not flying high enough or pushing the wrong stick, I could easily end up hurting someone, not to mention damaging the drone.

With that in mind, DJI's Mavic Air just feels like a level of hardware above the Parrot Anafi, and $99 extra might seem like a small price to pay for that peace of mind. Or just $63 extra if you deduct Parrot's in-app purchases. What's hilarious is that Parrot execs have actually tried to play off the Anafi's lack of obstacle avoidance as a good thing, claiming it breeds more responsible, focused and accountable pilots. Bravo on the marketing spin, but I'm not sure I've heard bullshit of that caliber in quite some time.

Source: Parrot
In this article: 4k, anafi, cameras, dji, djimavicair, drone, gadgetry, gadgets, gear, hands-on, mavicair, parrot, parrotanafi, quadcopter
All products recommended by Engadget are selected by our editorial team, independent of our parent company. Some of our stories include affiliate links. If you buy something through one of these links, we may earn an affiliate commission.