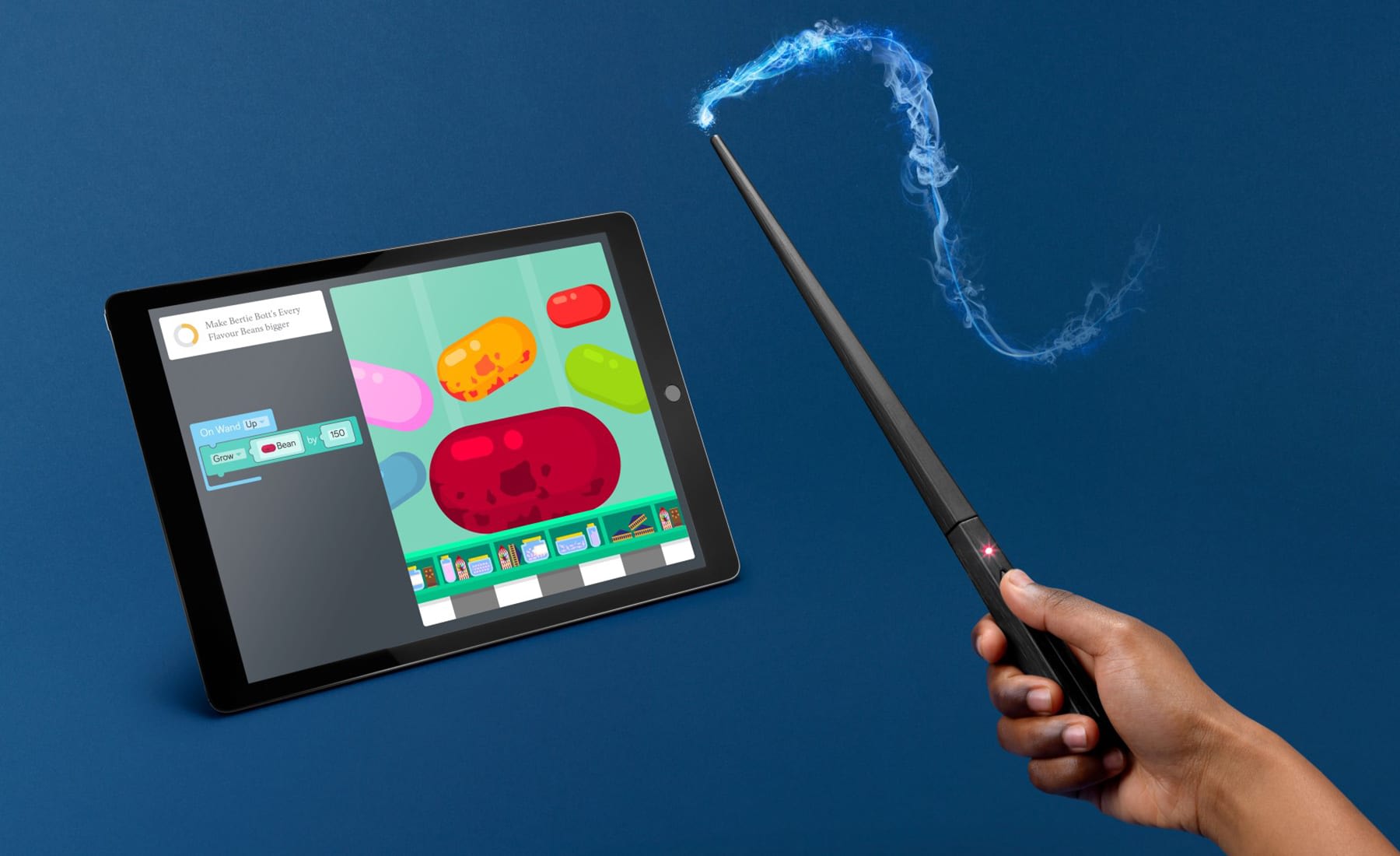 Harry Potter fans have plenty of replica wands to choose from. Some are designed for children, with mystical sound effects and LED lights. Others hew closer to movie props with beautifully carved handles and tips. Few, however, replicate the art of learning and performing magic. Kano, a startup based in London, is hoping to change that with its new learn-to-code Harry Potter wand kit. Like the company's previous hardware, it comes with a companion app that teaches you programming through block-based logic. This time, though, the challenges produce spells that you control on screen with a build-it-yourself plastic wand.

The company's first product, a child-friendly Raspberry Pi computer, shipped with a dozen or so parts that snapped together like Lego. The wand isn't quite as complicated, with six or so pieces to combine, and children can follow an instruction booklet if they get stuck or want to know what all of the components are for. One page, for instance, breaks down the core chipset, which includes a Bluetooth antenna, microcontroller, vibration motor, a codeable light and various sensors. It's a light throwback to the company's original mission -- to demystify computers -- but it's clear that coding is the focus this time.

"The original purpose of Kano was to take these sealed devices and let people interact with them creatively and understand how they work," Kano founder and chief executive Alex Klein said. "Now we're attempting to do the same with Hollywood. We're taking these sealed narratives, and these universal characters, and letting people manipulate them creatively."

Once the wand has been assembled, you'll need a Mac, PC, iPad or Android tablet to run the companion Harry Potter coding app. The design and functionality are similar to the existing Kano app, and Klein confirmed that the two versions will be merged eventually. You start by creating a profile and customizing a small wizard avatar with different clothes and glasses. You then traverse the wizarding world -- the top-down perspective looks a bit like the Marauder's Map -- completing tasks in iconic locales such as Hogsmeade, Diagon Alley, the Forbidden Forest and, of course, Hogwarts.

Kano is promising more than 70 step-by-step challenges at launch. They're all delivered in a similar fashion, with pop-up instructions and a small circular blob that highlights the block-like piece you need next. The left-hand side of the screen is a canvas for your code, while the right shows your live spell-in-progress. After a trip to Weasleys' Wizard Wheezes, I learned how to fling some of Bertie Bott's Every-Flavor Jelly Beans into the air. Afterward, Klein challenged me to do the reverse -- add more logic so a downward flick would send them all crashing back down to Earth. 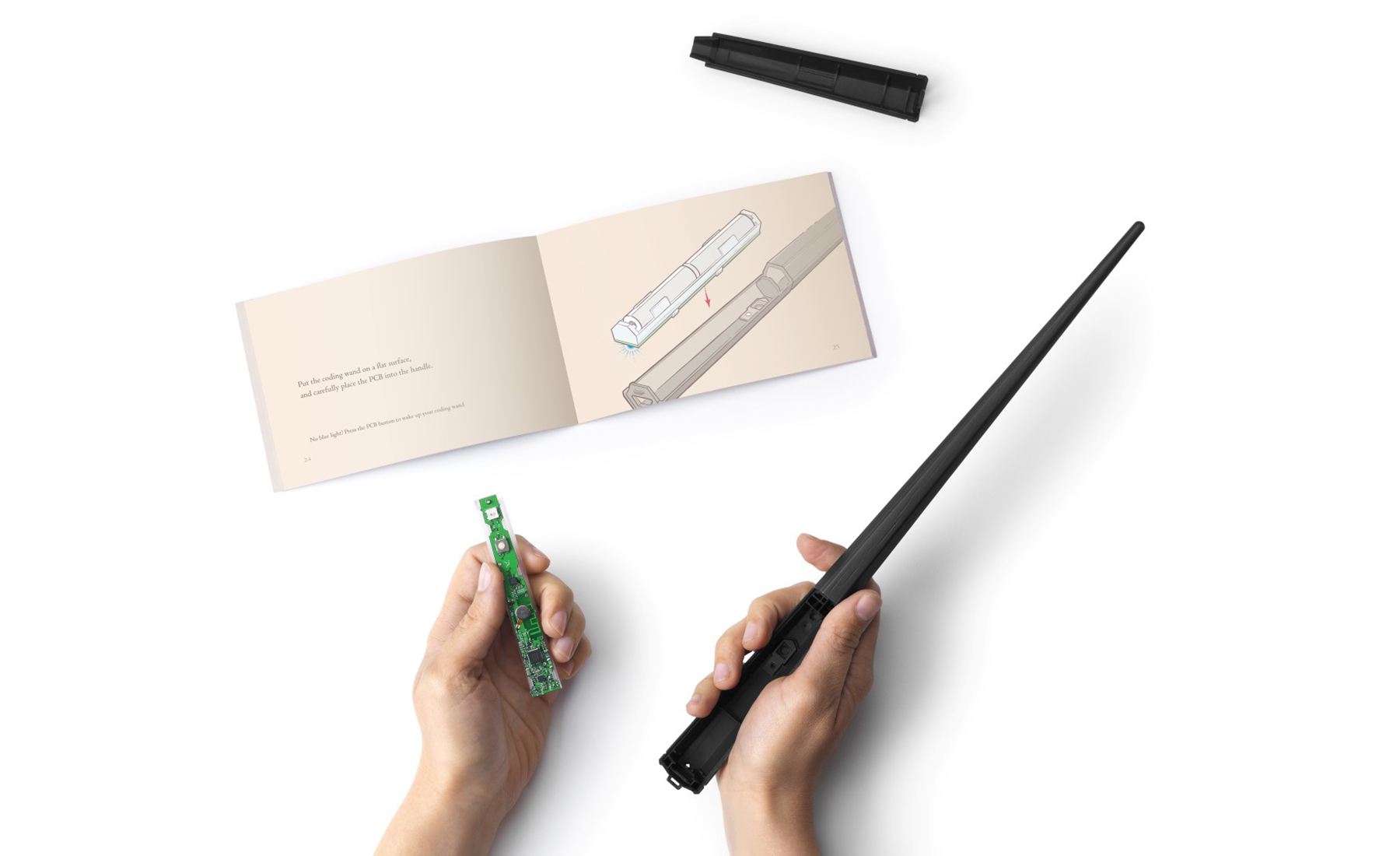 At any time, you can pick up the wand and test the spell. It connects over Bluetooth and has three sensors -- a magnetometer, accelerometer and gyroscope -- to track its location in three-dimensional space. The wand has a hexagonal shape, which looks cool in a futuristic-wizard way. It's also important because the wand's button and LED light have to be facing up for the hardware to work. If you pick it up the wrong way, the hardware will lose its orientation and the spells won't work.

As you progress through the challenges, you'll naturally pick up the knowledge required to customize charms and, eventually, build your own from scratch. One task, for instance, teaches you the fire-conjuring charm 'incendio.' By adding some blocks and tweaking the values inside them, you can create a longer flame trail, add some extra sparks or change the spell's color to a ferocious blue. You're never penalized for tinkering, as it helps you gain a deeper understanding of the underling code at play. "You get this nice sense of taking something you're familiar with, from a franchise, and then actually bending it a little bit," Klein explained.

The various logic blocks provide plenty of variety. You can trigger the wand's built-in rumble pack, for example, and change the color of the LED light to match the spell you're performing. The app can also trigger sound effects that erupt out of your PC or tablet (the wand itself doesn't have a speaker.) The version I demoed, though, didn't have any of the movie's iconic music. The app doesn't have any voice acting, either, unlike the recent Harry Potter game on mobile. It seems unlikely that these will be added before release, which will no doubt disappoint some. 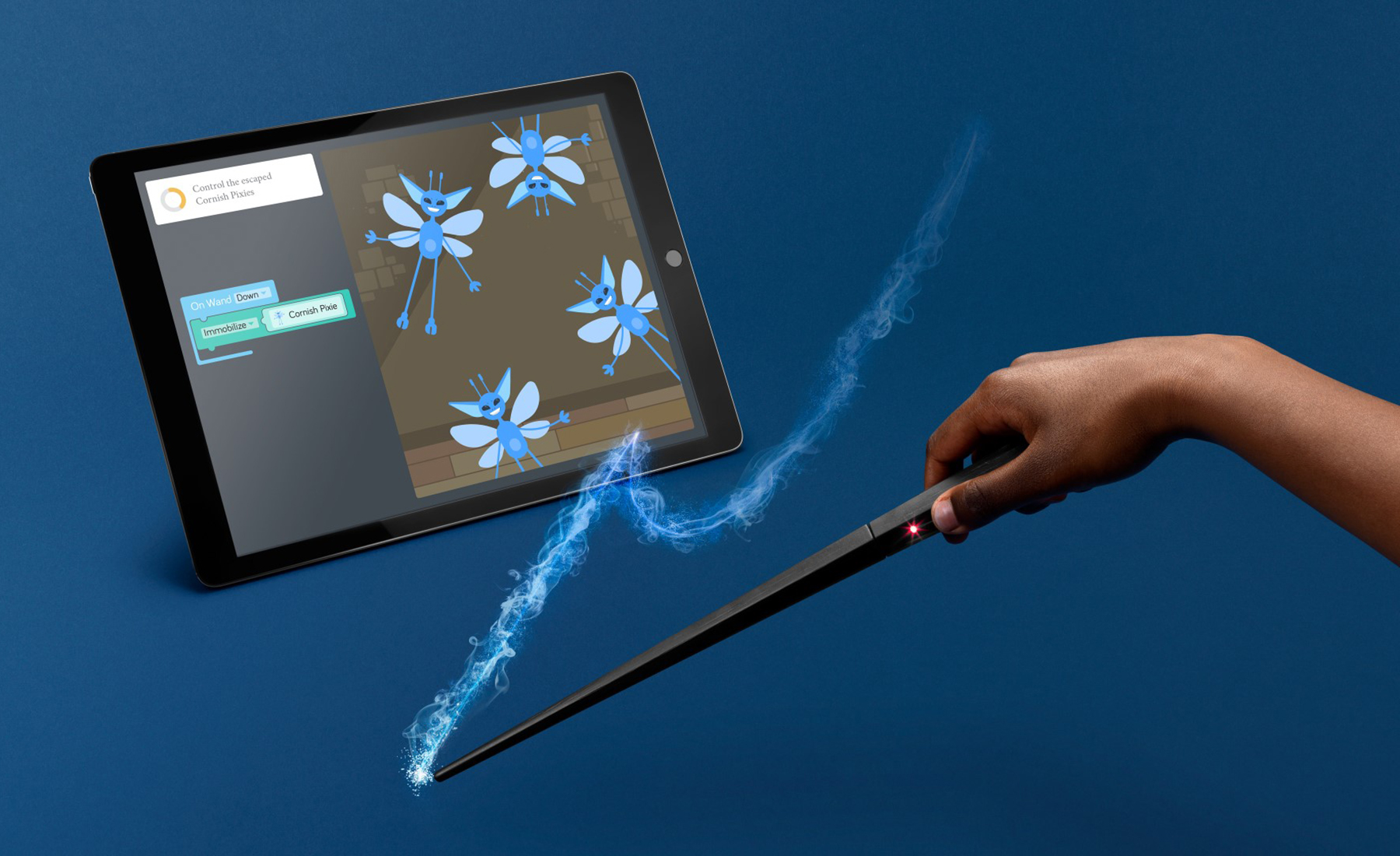 The wand will connect to an online platform, called Kano World, where you can post projects and view other people's work. And the app will let you download, inspect and freely edit community spells. It's an important feature because some users will, inevitably, burn through the challenges that Kano has developed in-house. The service should, in theory, give these super-fans a never-ending stream of inspiration and challenges to work through once they've conquered the basic tutorials.

If you have the existing Kano Computer Kit, you can unlock 10 additional challenges. The wand will, eventually, be compatible with the company's camera, speaker and lightboard kits, which were pitched on Kickstarter as a family of devices with mix-and-match sensors in September 2016, too. You could buy one and complete its bundled coding projects or mix them all together and make something entirely new. The camera's tripwire sensor, for instance, could be programmed to trigger an 'intruder!' animation on the lightboard or a funky song through the speaker. More USB sensors were promised to increase the value and possibilities of each kit.

Kano launched the 'Pixel' lightboard and a small, USB motion sensor kit last summer. The wand will integrate with these "this Christmas," according to Klein. The camera and speaker kits, though -- which were supposed to ship 12 months ago -- still haven't materialized. Backers can wait until "next year," according to Klein, when the products are scheduled to come out, or request a full refund. "No questions asked," Klein said. "Just email us and we'll give you all your money back. But, what's interesting is that the vast majority of backers have decided to wait." 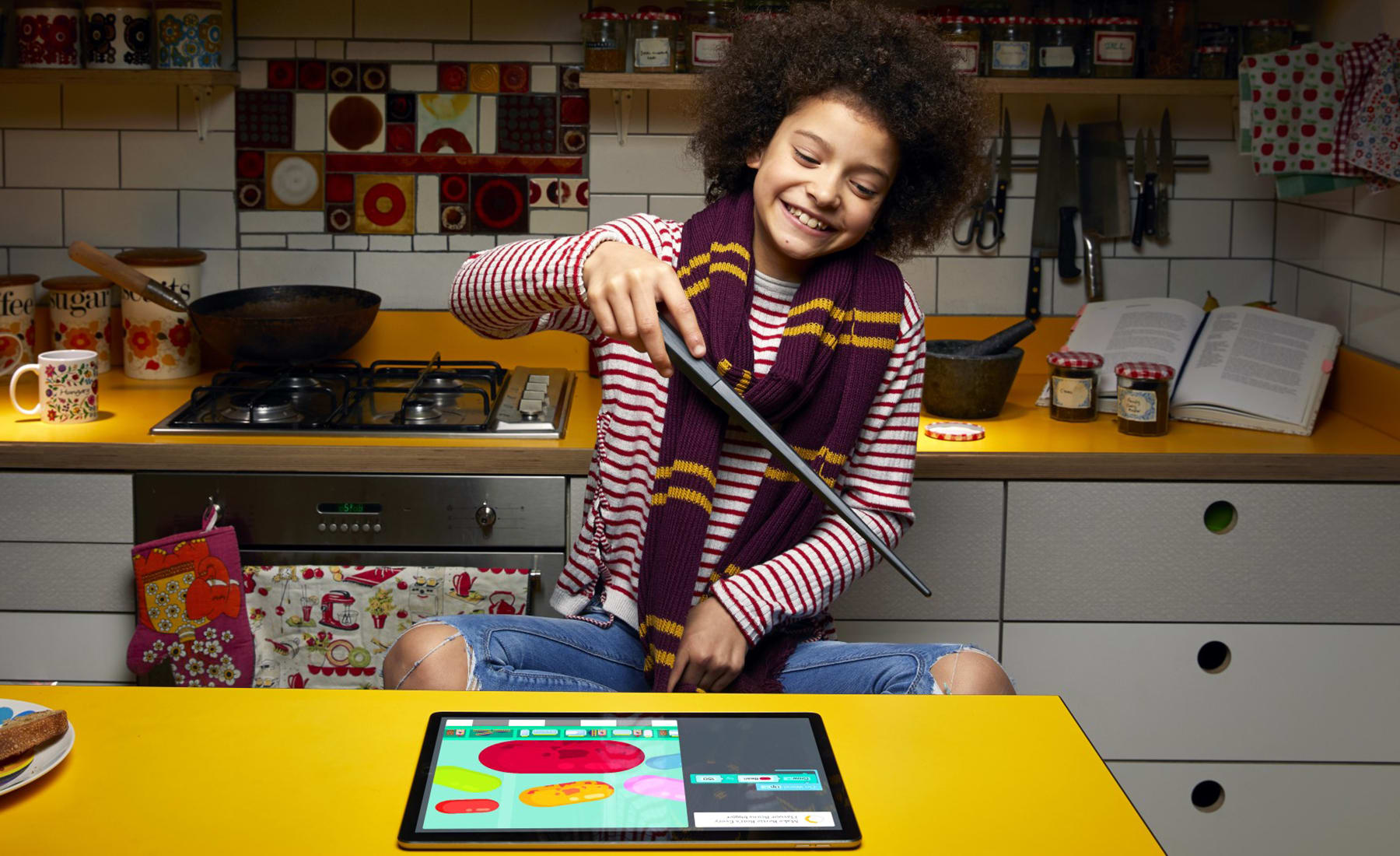 The Harry Potter Kano Coding Kit will launch in the US, Canada, the UK, Australia and New Zealand for $99.99/£99 on October 1st. It's timed, undoubtedly, to take advantage of the new Fantastic Beasts movie, which hits theaters worldwide on November 16th. "It was a happy alignment of stars," Klein said. And a few sensible marketing meetings, I suspect. 9
In this article: Coding, gadgetry, gadgets, gear, HarryPotter, HarryPotterKanoCodingKit, Kano, KanoCodingKit, Programming, STEM, Wand
All products recommended by Engadget are selected by our editorial team, independent of our parent company. Some of our stories include affiliate links. If you buy something through one of these links, we may earn an affiliate commission.