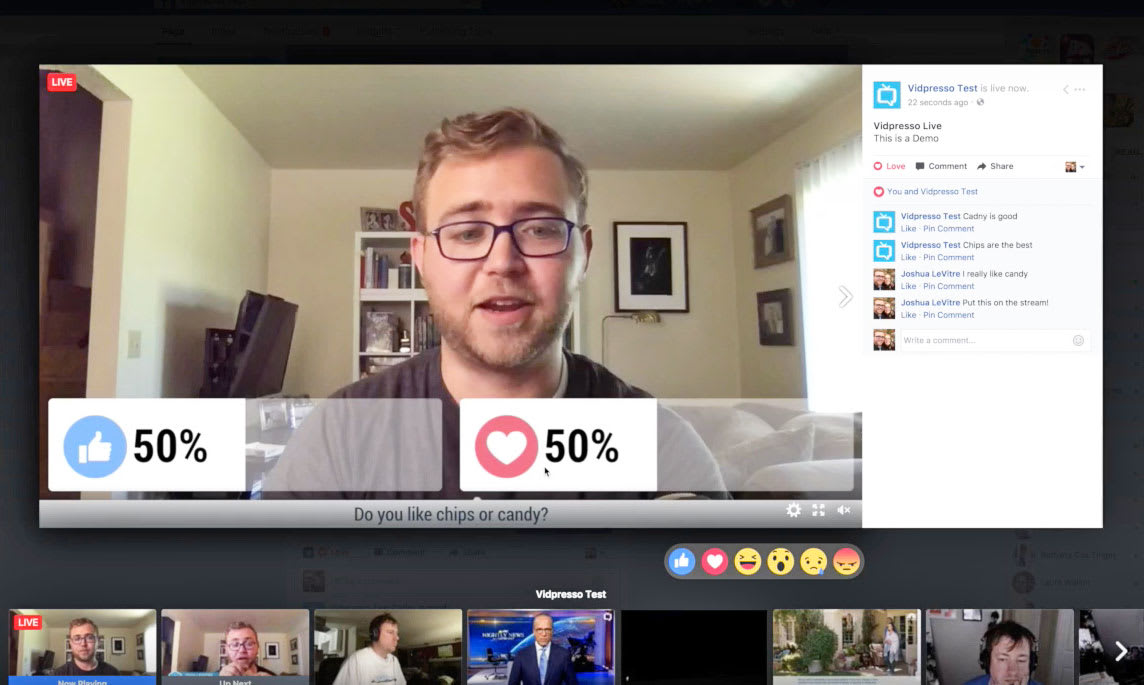 Facebook's new acquisition will make it much easier even for amateur live broadcasters to add interactive effects on their videos. The social network has snapped up a startup called Vidpresso*, which offers clients access to a technology that allows them to display polls, comments and other elements from Facebook, Twitter, Periscope and other social networks on the screen. A spokesperson told TechCrunch that it has acquired its seven-person team and its technology, but not the company itself. Vidpresso's employees will apparently join Facebook's offices in Menlo Park, London and LA while continuing to provide clients like BuzzFeed and Nasdaq access to their services.

It's not clear if Facebook will eventually cut off those companies' access to Vidpresso's tech, but the team said in their announcement that joining the social network will allow them to offer their tools to more people than just their A-list publishing partners. "Eventually," they wrote, "it'll allow us to put these tools in the hands of creators, so they can focus on their content, and have it look great, without spending lots of time or money to do so."

Facebook's Vidpresso acqui-hire speaks to the tech giant's continued video push. The company has been padding its offerings with more and more new features in an effort to make video a bigger part of its business and to compete with its rivals in the space. Some of its newest features include the ability to launch canned videos as live moments with real-time chats and a tool called Watch Party that allows members of Facebook groups to watch videos simultaneously.

You can see Vidpresso' technology in action below:

Via: TechCrunch
Source: Vidpresso
In this article: facebook, gear, internet, vidpresso
All products recommended by Engadget are selected by our editorial team, independent of our parent company. Some of our stories include affiliate links. If you buy something through one of these links, we may earn an affiliate commission.