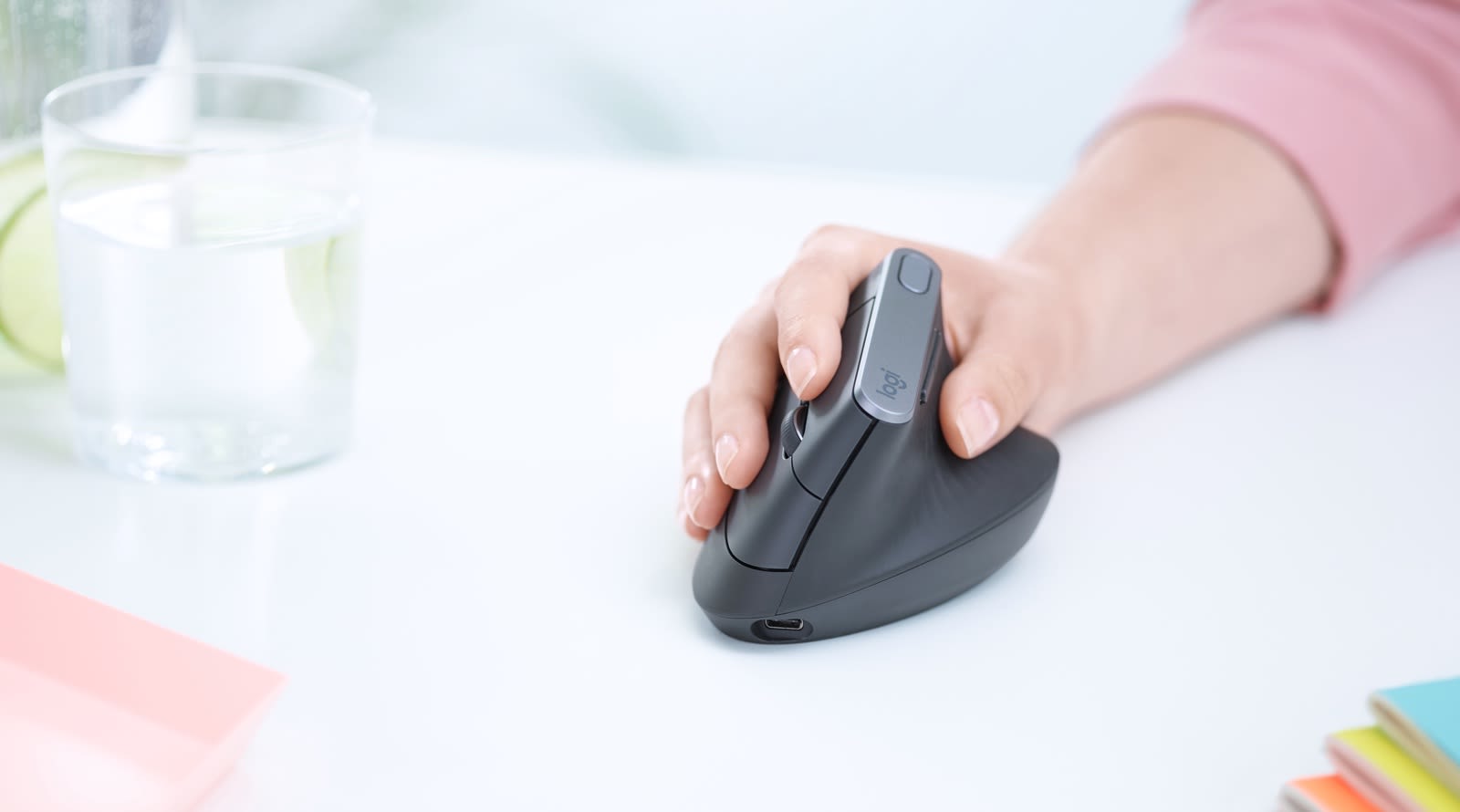 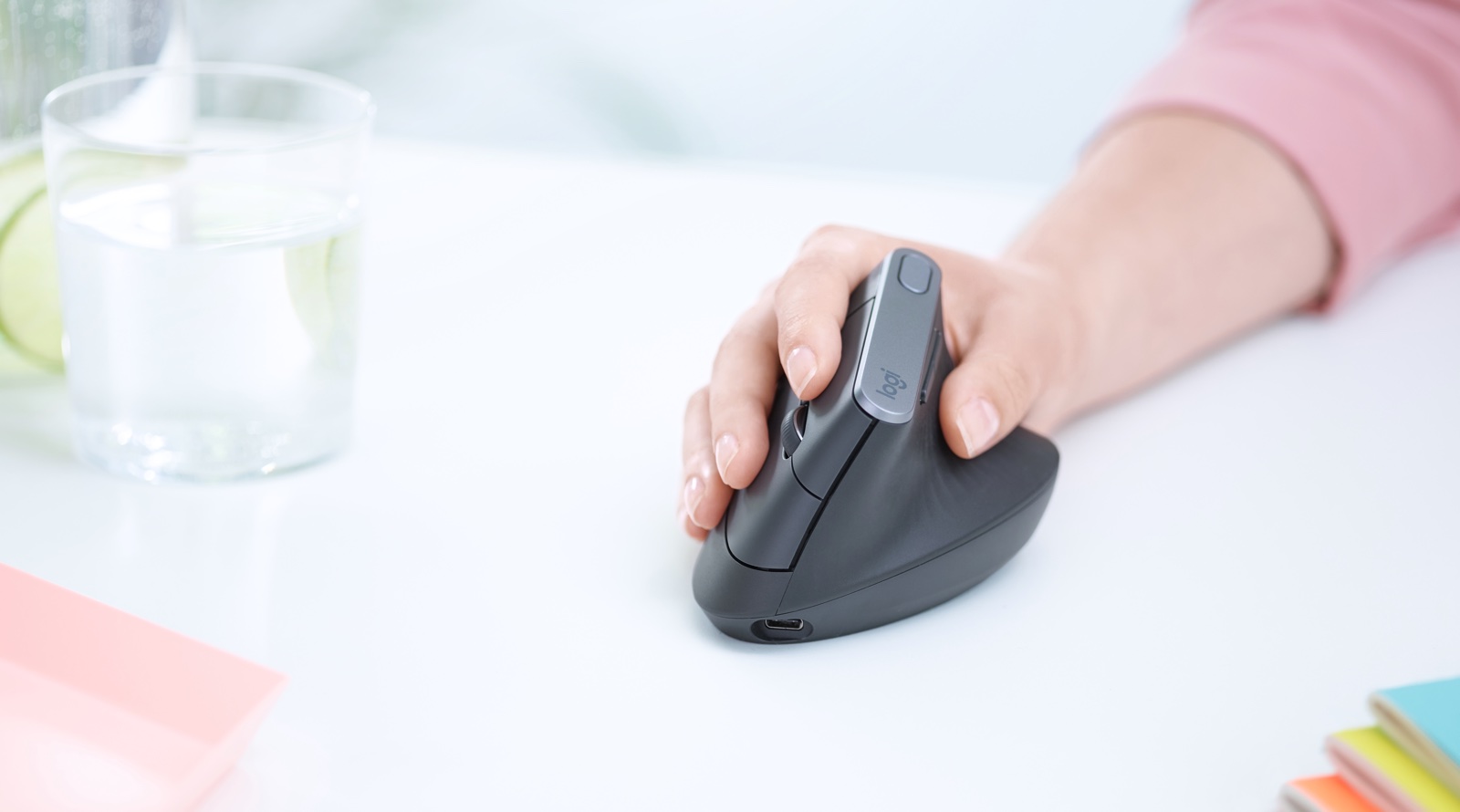 There's a good chance you're holding your mouse wrong. Maybe you're gripping it too hard, or your hand is just at a bad angle. While mouse-related injuries are fairly common, if you're experiencing wrist or arm pain regularly, it's probably time to look at ergonomic mice. That's an area Logitech has been exploring for years, most recently with the MX Ergo, which brought back the trackball for the modern era. But now, Logitech is embarking on entirely new territory: its first vertical mouse. The MX Vertical looks like one of Logitech's modern mice flipped to its side, sitting atop a melted puddle of wax. It's unusual, for sure. But that design has a purpose. As your hand approaches it, your wrist turns slightly to fit into the thumb groove. Your fingers rest on the top buttons in a natural way. And your arm straightens out, so that you're not just controlling the mouse with the force of your wrist. Logitech calls the 57-degree angle of the MX Vertical a "natural handshake" orientation — holding it is almost effortless.

I've used Logitech mice since hopping on my first PC in the mid-90s, and I've tried a variety of experimental mouse designs with varying degrees of success. But any hesitation I had about using the MX Vertical melted away the first time I held it. My hand landed on it perfectly, and while it took a few minutes to get used to its unusual orientation, I was eventually zipping around the screen as accurately as with my usual mouse (a Logitech MX Master).

It handled most productivity work, like browsing through web pages, scrolling through documents and sifting through emails, without any trouble. The MX Vertical is also useful for slow strategy games like Civilization VI, but unfortunately, it's a bit too slow to move around quickly for fast-paced shooters. (That's not a huge surprise.)

To prove that the MX Vertical actually helps consumers, Logitech enlisted the help of the ergonomics consulting firm VSI. In a survey of 52 users, all of them reported a decrease in discomfort in their wrists and forearms, according to VSI CEO Jeannie Iverson. She also noted that many technology companies don't actually run those sorts of discomfort tests.

The MX Vertical features a 4,000 DPI sensor, which allows it to move around four times as far as a typical mouse with the same amount of hand movement. You can change the DPI sensitivity on the fly by hitting the button at the very top of the mouse. Clearly, that's not in a very ergonomic spot, but that's also not a setting you'll need to change very often. There are also back and forward buttons towards the top of the thumb groove. As you've probably guessed, the mouse is only designed for right-handed users.

I'll need to test out the MX Vertical longer to see if it really lives up to Logitech's claims, but at this point I can say it's definitely comfortable and accurate. You can pre-order the mouse today for $100 on Logitech's website today, and it'll be available in stores next month.

Source: Logitech
In this article: gadgetry, gadgets, gear, Logitech, mice, MXvertical, personal computing, personalcomputing, verticalmice
All products recommended by Engadget are selected by our editorial team, independent of our parent company. Some of our stories include affiliate links. If you buy something through one of these links, we may earn an affiliate commission.