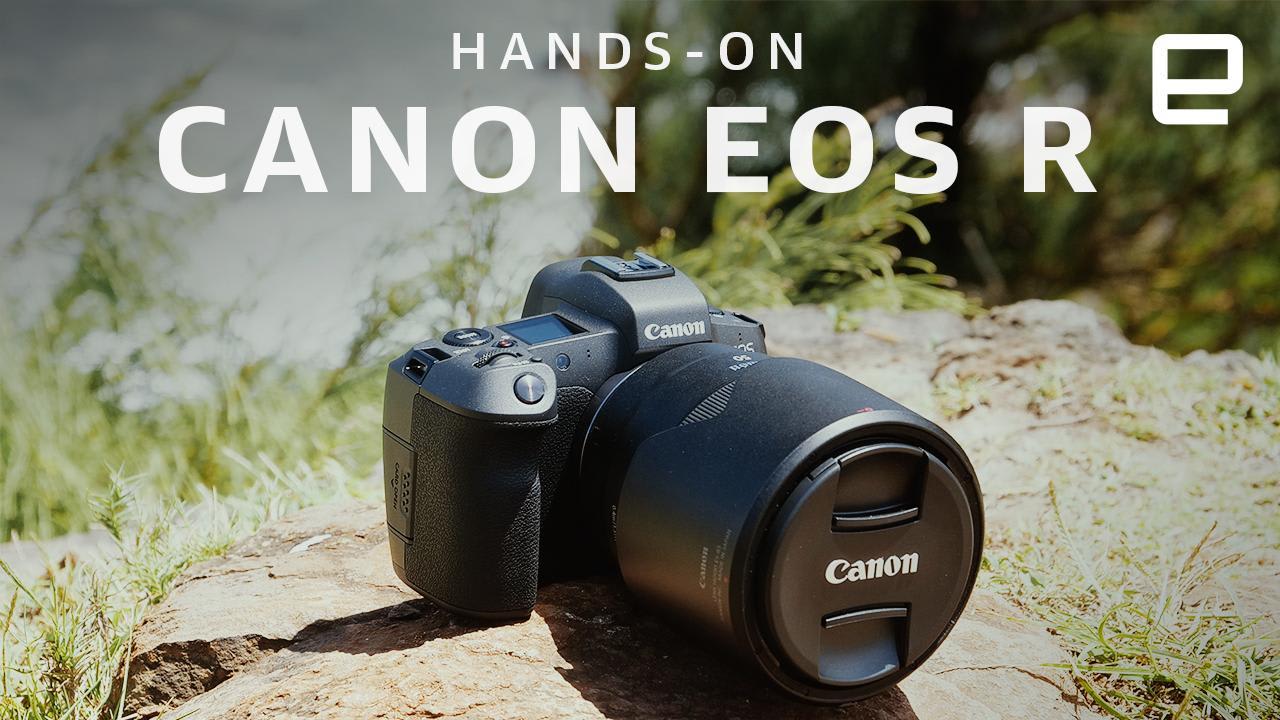 Earlier this week, Canon unveiled one of the most critical products in its history: the full-frame mirrorless EOS R. On paper, it had a lot going for it, like an all-new mount that will allow for superior lens designs, excellent handling and a much-improved Dual Pixel autofocus system. There was also some not-so-good, like the cropped 4K and lack of in-body stabilization.

But specs are specs, and Canon let us give the EOS R a thorough hands-on test with a variety of lenses and shooting scenarios. Three days isn't a lot of time to test an all-new camera, but it was enough to get the flavor of it. So far, there's a lot to like, but the company didn't look hard enough at what rivals Sony and Nikon were doing.

We took a deep dive on the specifications and features in our earlier post, but here are a few key facts. The $2,299 EOS R is a full-frame, 30.3-megapixel camera that you could think of as a Canon 5D Mark IV-lite. It has the same Dual Pixel AF system and can shoot just a bit faster at 8 fps, or 5fps with continuous autofocus. The ISO range is also similar: from 100 to 40,000, expandable to 50-102,000.

The new mount is called RF and is 54 mm wide by 20 mm deep. Canon unveiled four interesting new lenses with the EOS R, but you can use all your EF and EF-S lenses with three adapters. The basic $100 model gives you AF, stabilization and lens data, the $200 version provides an extra control ring dial, and the drop-in filter mount adapter is $300 with a polarizer or $400 with a neutral-density filter.

The EOS R can shoot 4K video at 30 fps but is cropped at 1.7 times, even more than an APS-C camera. Full HD video, at a maximum 60 fps, can either be cropped or not cropped. Like the 5D Mark IV, it has microphone and headphone ports. There's no in-body stabilization, so you'll need optically stabilized lenses if you want that. There's only one card slot, but it supports high-speed (up to 300 MB/s) SDXC UHS II cards, a first for Canon. The all-new OLED electronic viewfinder has 3.69 million dots, and the rear touch display can flip out to vlogger or selfie modes. 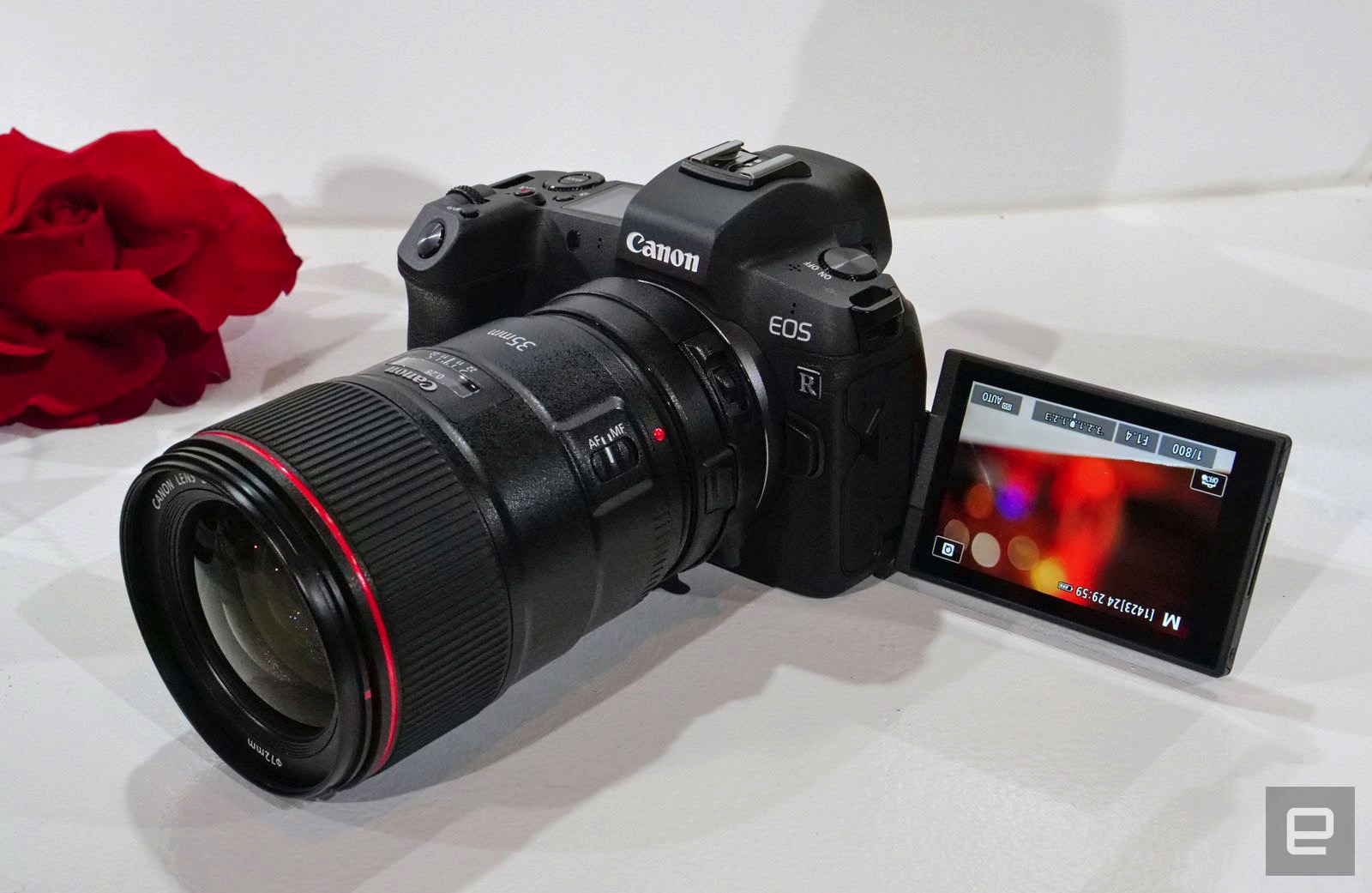 Now that you're caught up, forget the specs -- they give a very incomplete picture of the EOS R. What's more interesting is how Canon completely rethought everything about its design and handling. The button, dial and menu layout are a lot different from past DSLRs like the 5D Mark IV. All of this is for the better, in my opinion.

The mode selector has been replaced by a button embedded in the front dial. There's no rear dial and no joystick. Instead, there's a D-pad type button on the back and a new "Multifunction Touch Bar." The front dial has been moved to the top, along with an LCD display like the one on Fujifilm's X-H1. All the new RF lenses will have a control ring, which is also available for EF glass via the aforementioned adapter. Finally, the menu system has been thoroughly reshuffled. 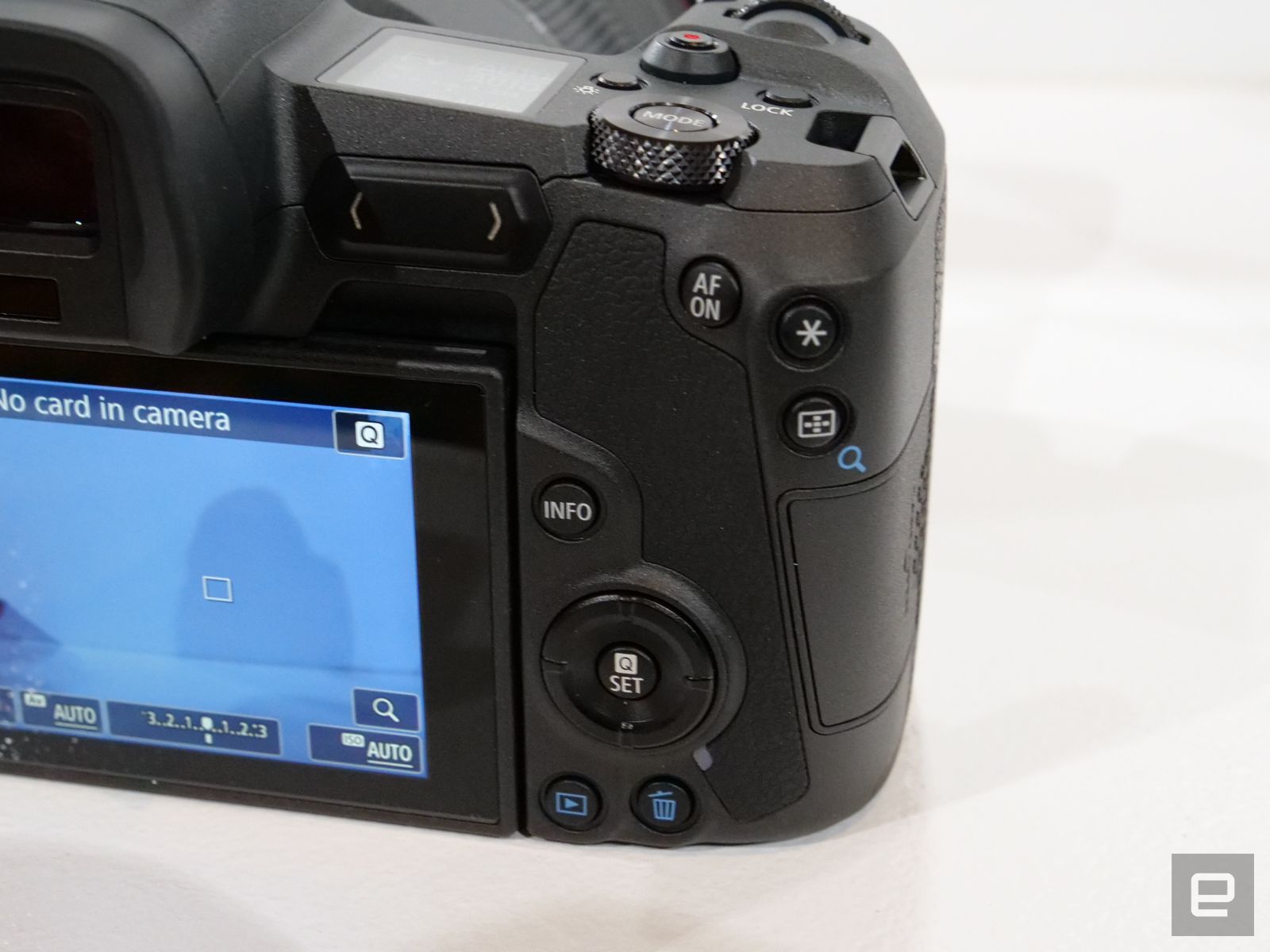 Canon knows well that camera users hate change, but it risked their wrath anyway. The reason is simple: It wants you to be able to tailor the EOS R to your exact needs while operating the camera without looking up from the EVF.

Did they succeed? It's hard to say after just a couple of days (stay tuned for a full review), but it was a pretty brave step on Canon's part. On the one hand, it's going to take me a while just to figure out how to program everything. The system for programming is overly complex and requires a bit more refinement. Once you do set it up, though, the benefits are large.

For instance, the multifunction touch bar can be programmed to ISO, white balance, shutter speed, or any other function you want. You can slide your thumb on it to adjust a function or tap on the left or right to select exact settings. Focus can be selected by sliding your thumb on the touchscreen or "D-Pad" rather than using a joystick. All the buttons can be reprogrammed. Let's just say that if you use the EOS R out of the box without changing anything, you're doing it wrong.

The RF full-frame mirrorless mount is not compatible with the EOS-M APS-C mirrorless mount, which is sure to aggravate some users. But in testing the cameras, it's easy to see why Canon did this. The new 50mm f/1.2 and 28-70mm f/2.0 lenses, products of the new mount design, are simply stunning. A Canon rep told me that the RF 50mm lens is much, much sharper than the EF version, and a bit smaller to boot.

It's very hard to judge an autofocus system in a few days because it takes a while to master one. The EOS R has the Dual Pixel autofocus used on a number of Canon DSLRs and EOS-M mirrorless cameras, but it's a better implementation. It can meter in very low light (down to -6EV with an F1.2 lens), and while the 5,655 selectable AF positions sound ridiculous, it does make for uncanny focus tracking.

I expected the EOS R's video autofocus to be superb, and it is. It tracks subjects well enough to make even the hackiest shooters (ahem, moi) look good. That has carried over to the photo side, as it can maintain focus on moving subjects under very difficult conditions. I'm not crazy about the touchscreen AF select, though, and I'll need more time to see whether AF as good as Nikon's D850 or the Sony A7 III.

The 8 fps shooting speeds (a mere 5 fps with continuous AF) won't set the world on fire, but the speeds are fine for the intended amateur enthusiast buyer. More importantly, it nails focus on most shots, and with a fast UHS-II card, you can buffer 100 JPEGs and 47 RAW images.

The EOS R feels very sturdy thanks to the big grip, premium feel and weatherproof magnesium body. Once you've programmed the buttons, touchpad and dials to your liking (I hadn't quite succeeded by the end of the week), it felt responsive and easy to use. The touchscreen is a bit laggy, which isn't ideal, because there's no joystick for touch focus.

Here's a nice touch: Canon has equipped the EOS R with a sensor cover that deploys when you turn the camera off. That way, when you remove a lens, there's zero chance the sensor will attract dust or other nasties. If you don't turn the camera off before removing the lens, however, it doesn't work. 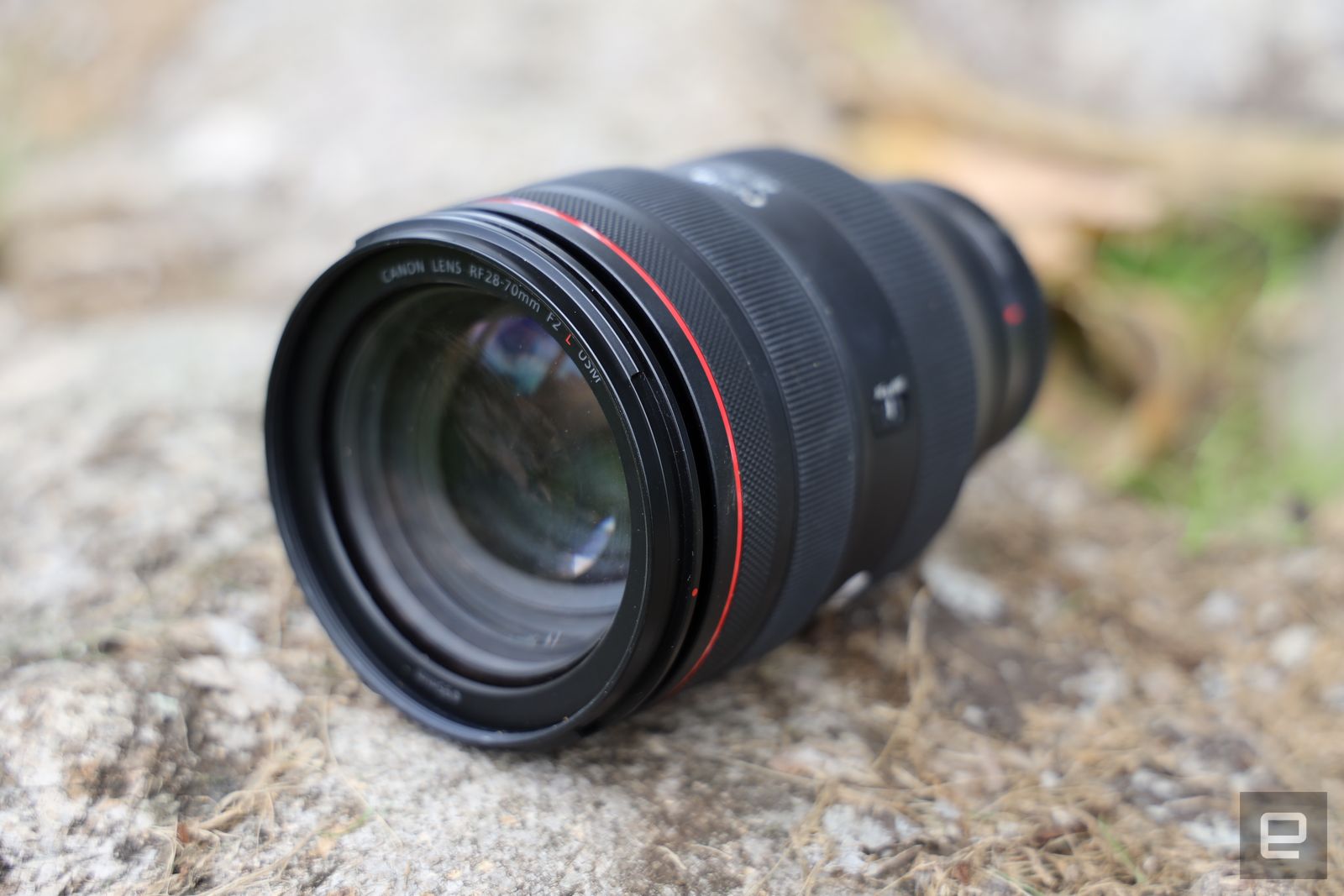 On the other hand, the lens is so fast, that you need IBS a bit less for photos. Let's hope Canon's next RF mount body has IBS, as the lack of it is a bad look next to Nikon's Z6/Z7 and Sony's A7 III.

Unlike Nikon, Canon let us shoot (a lot) with the EOS R using any RF or EF lens we wanted -- so naturally, I chose the $10,000 400mm f/2.8 L model. Again, it's hard to judge image quality in a short time, especially since there's no software yet to read the RAW files. Though Canon isn't known for its super-great dynamic range, the images I saw in JPEG form looked very good -- skin tones, in particular, were very natural.

In terms of video, the situation is less good. 4K is cropped by 1.7 times, as mentioned. That means you're not getting the maximum low-light capability and depth of field out of that big sensor. Canon told Engadget that this was done in order to reduce heating because the small body can't dissipate heat well. That doesn't explain, though, why Sony and Nikon's similarly-sized mirrorless cameras can handle a full pixel readout just fine.

I shot most video with the 24-105 f/4.0 kit lens, as it has optical stabilization. With that crop, however, 24 mm instantly becomes 41 mm, which is a pretty dramatic punch-in. That keeps the camera well out of arm's length if you're trying to get more than your head in a self-filmed video. It also makes landscape videography challenging.

Surprisingly, the EOS R also has a lot of rolling shutter (jello), considering the reduced pixel count. And as usual, you can't shoot for more than a half hour. Nikon's Z6/Z7, on the other hand, allows for continuous recording via split files. 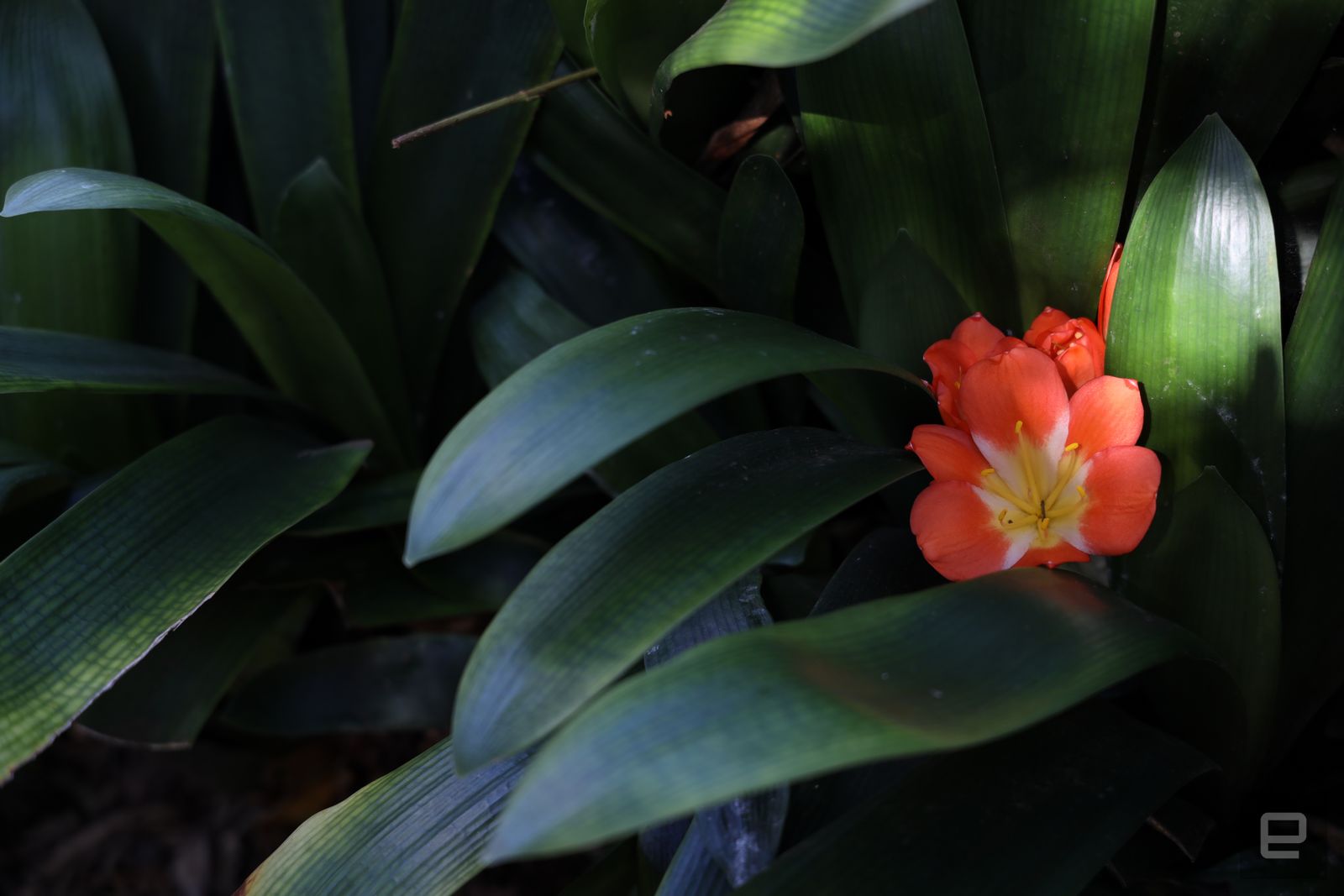 On the positive side, the touchscreen flips around for easier vlogging. The EOS R can output clean, 4:2:2 10-bit video from the HDMI port, and it's uncanny how the Dual Pixel autofocus keeps moving subjects in rock-solid focus. Canon needs to keep pushing its video capabilities, though, particularly considering rumors that video-savvy Panasonic will launch a full-frame mirrorless camera.

The EOS R is a groundbreaking product in many ways, but the missed opportunity here is frustrating. Canon specifically bragged at its event that it's almost never first to market, but instead, tries to be the best when it does come.

Despite those words, it did break ground with the new mount and surprised a lot of folks with that stunning 28-70mm f/2.0 lens. The new body layout and touch bar also showed some pioneering spirit.

However, Canon has to start looking at what its competition is doing. A lot of folks have already jumped ship to Sony's more innovative mirrorless models, and the EOS R is not necessarily going to make them regret it. As I said before, Canon has to at least match its rivals' features, and preferably beat them, if it wants to win in mirrorless. Being conservative is no longer an option.

Some gallery images and video clips were shot with Canon's 35mm macro, 28-70 f/2.0 lens and 400mm f/2.8 lens. All of these lenses are pre-production samples. The final appearance of the 400mm production model might change.

In this article: 4K, Autofocus, cameras, canon, EOSR, Full-frame, gear, hands-on, Mirrorless, video
All products recommended by Engadget are selected by our editorial team, independent of our parent company. Some of our stories include affiliate links. If you buy something through one of these links, we may earn an affiliate commission.