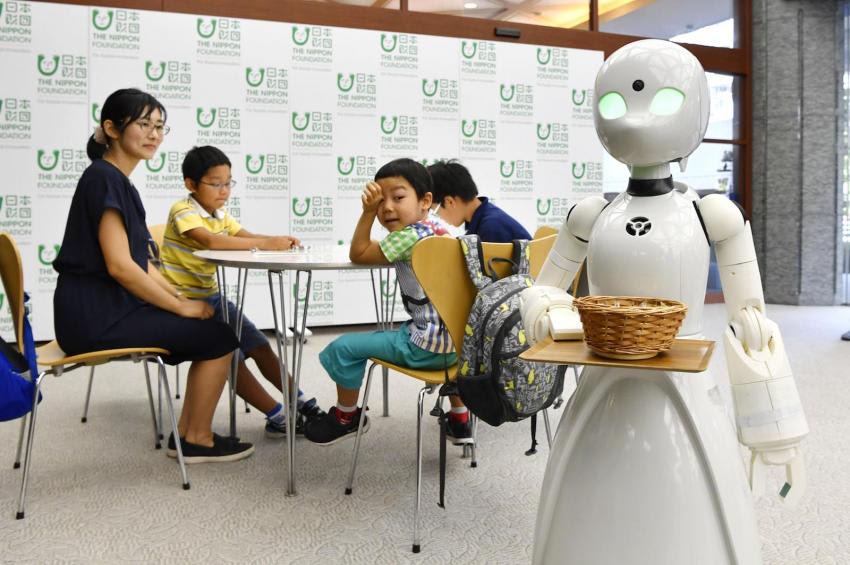 Japan is taking steps to fight social isolation by employing robots in as many aspects of life as possible. After introducing autonomous robots in various roles in a hospital and a number of nursing homes and schools, a cafe in Tokyo will soon open with robotic waiters controlled remotely by people with physical disabilities who wouldn't be able to work otherwise.

The anthropomorphic, if a bit creepy, OriHime-D robots used at the Dawn ver. Beta cafe are 1.2 meters tall and weigh about 20 kilograms. They carry a camera and a speaker and stream the footage to the controller's PC or tablet over the internet.

At a demonstration of how the system would work in August, a robot waiter was controlled by Nozomi Murata, who suffers from autophagic vacuolar myopathy that causes atrophy of skeletal muscles. The robots' control system also has an eye-tracking input capability, which makes it suitable to be used by people with late stages of amyotrophic lateral sclerosis (ALS).

The pilot run of the cafe is scheduled for weekdays from November 26th to December 7th. The creator of the robots, Ory Laboratory, plans to open a permanent cafe with robot waiters closer to the 2020 Tokyo Olympics and Paralympics.

In addition to OriHime-D, Ory Laboratory produces a smaller robot that's mostly used in Japan for telecommuting. At 21.5 centimeters and 600 grams, they roam around the offices of some 70 companies, representing employees who couldn't be at work due to illness or other reasons.

Another area where robots are increasingly involved in Japan is elderly care. A variety of caregiving institutions have been employing robots that help their patients move, but also keep them company when there are no humans around. According to the estimations of Japan's Ministry of Economy, Trade and Industry, the robotic service industry will reach $4 billion a year by 2035 — a 25 times increase compared to the current level.

Via: Japan Today
Source: Nippon.com
In this article: japan, Orihime, robot waiter, robotics, robots, tokyo, tomorrow, waiter
All products recommended by Engadget are selected by our editorial team, independent of our parent company. Some of our stories include affiliate links. If you buy something through one of these links, we may earn an affiliate commission.