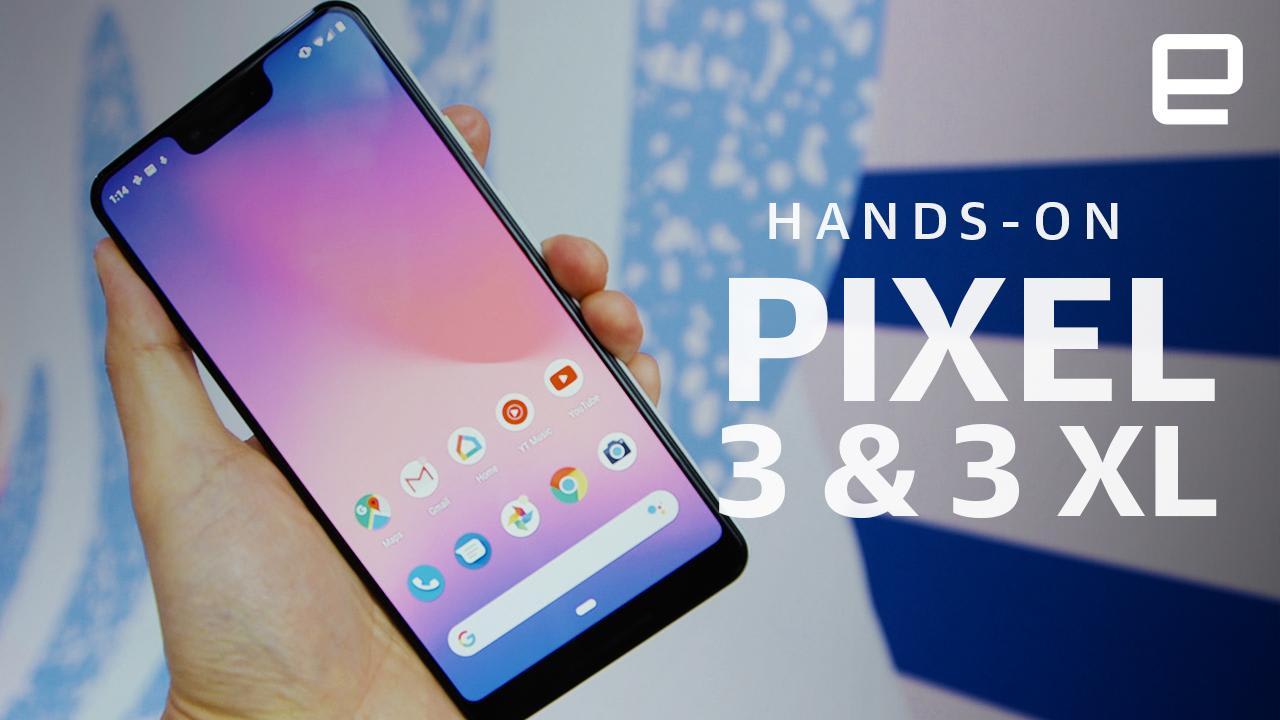 Google's hardware keynote just ended, and as usual, the horde of media professionals are raring to get their hands on all the new devices. Despite all the Pixel 3 leaks before today, I'm still desperate to get my hands on this thing too. I'll admit, I really want to see the selfies it can shoot, especially now that I can squeeze more people into my pictures with that second wide-angle camera. I've already briefly touched it and, man, I love that "Not Pink" color. The device feels really premium too. In fact, let's take a moment to talk about the hardware quickly before I delve deeper into what I believe is the true star of the new phones: software. The new Pixels aren't all that different physically from their predecessors. The Pixel 3 has a new glass covering that, together with the metal body, makes it feel really premium. It's hard to capture on camera, but I like the way the curved edges and corners make the Pixel 3 feel smooth and comfortable to hold. 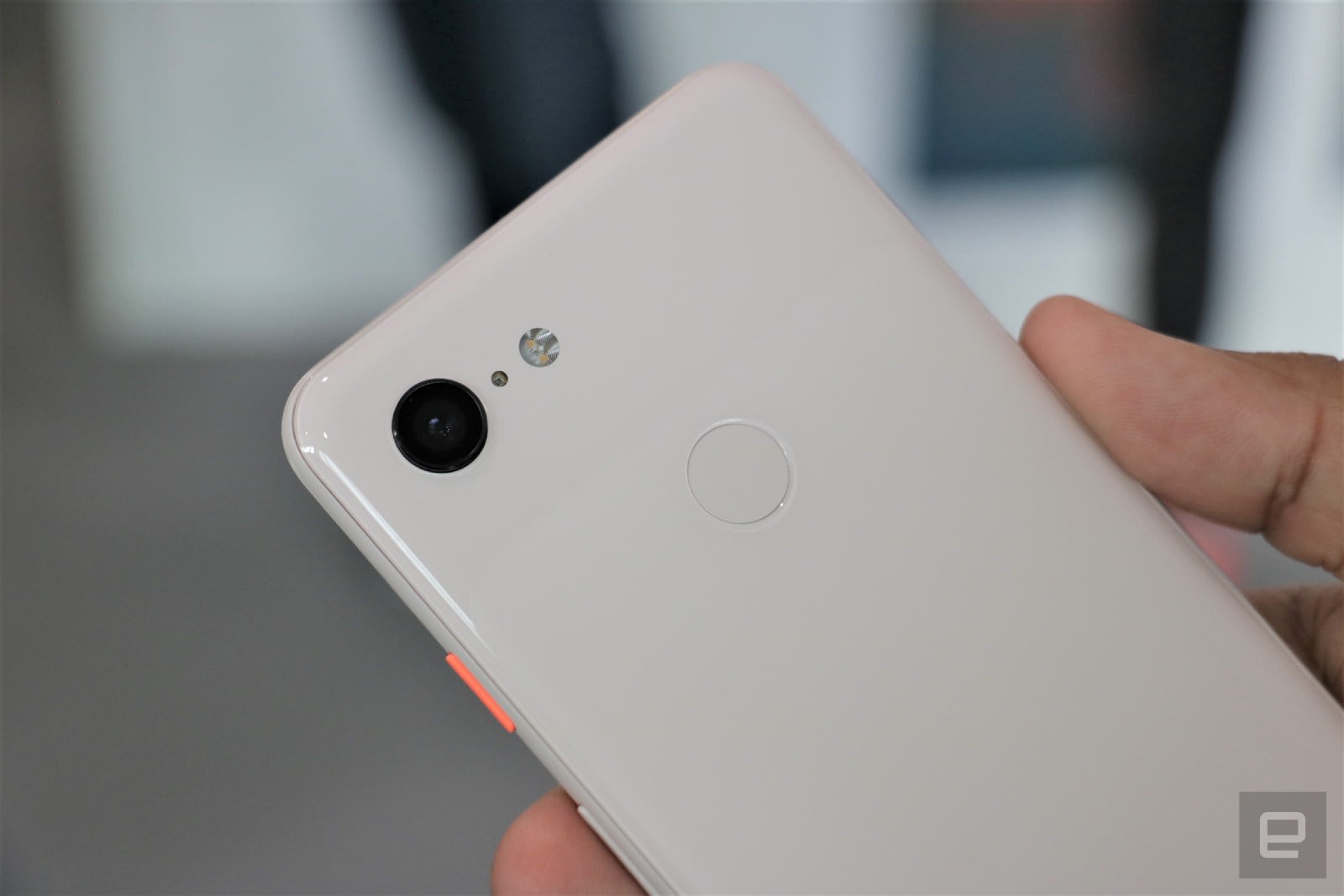 The smaller Pixel 3's full HD+ screen looked bright and vibrant here in the demo area, too, and the new dual camera on the front took some decent selfies. Also, in trying to keep the phone's edges as uncluttered as possible, Google moved the SIM tray from the side of the phone to the bottom, next to the USB-C charging port. This tray will support eSIM and a physical card if you buy it directly from the Google Store. If you go through a carrier, though, the eSIM support will depend on whether your provider decided to offer it.

To keep your data safe, Google added a dedicated on-device component that's called Titan Security. This stores your sensitive information like passwords or biometrics and places it away from the RAM and storage so it won't be accessible for people targeting those areas. This also lets Google maintain a relatively small 4GB of RAM on the phone without too much compromise on performance, or so the company says, anyway.

I've taken a deeper look at the new camera features here, though there are quite a few things we can't check out yet (more on that later). The second camera on the front does allow for a wider field of view -- Pixel phones product manager Peter Prunuske and I got a couple of selfies with both of us in the shot. With the regular camera, you can see only up to my neck, but with the wider lens, you can almost see where my top ends at my waist. We also see a lot more of the background, and, despite our being in a backlit situation, our faces are still nicely exposed.

There's also the new Photobooth mode, which automatically snaps portraits when it detects a smile in your frame. You'll have to first go into this profile through the camera settings and hit the shutter button to start the session before it'll start looking for smiles. Once it was set up correctly, the Pixel 3 was fast and accurate, snapping away when Prunuske or I grinned hard at it. 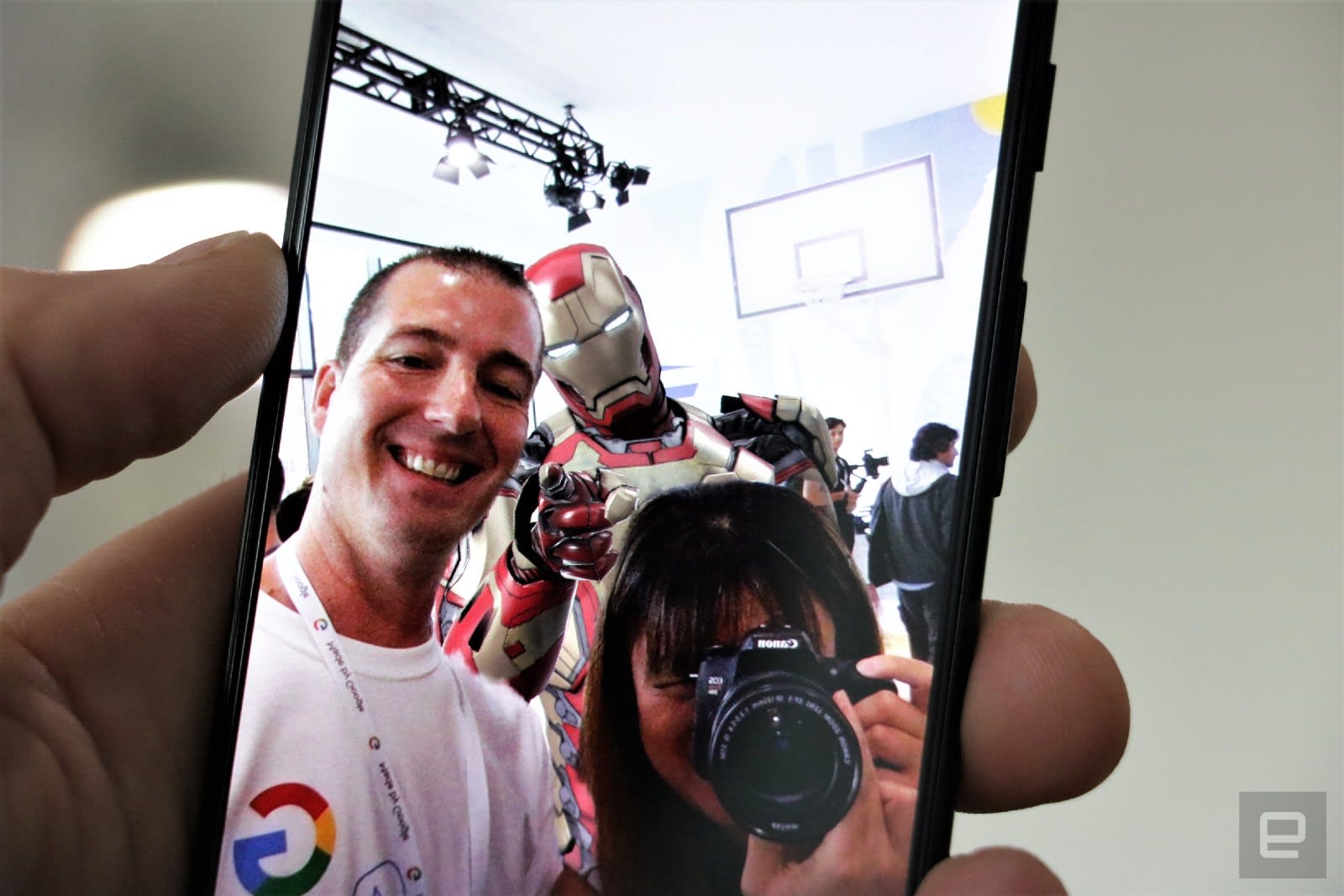 Prunuske also showed me the new Playground feature, which puts AR stickers into your photos. I'm a huge Marvel fan, so naturally I jumped at the opportunity to get a photo with Tony Stark himself (in full Iron Man suit). Though there were two people in the shot (me and the Google rep), the sticker was smart enough to place Iron Man in between us, making it look more realistic. The character pointed his finger at the camera and moved around naturally too. This won't be a feature you use all that often, but when you're in the mood, at least it works well.

You can now also tweak the level of background blur in your portraits after taking the picture, just as on the new iPhone XS. In another selfie with Prunuske and me, he took the setting up to max, and the Pixel 3 blurred out everything in the scene apart from him. Sadly, the software also wiped out my face. 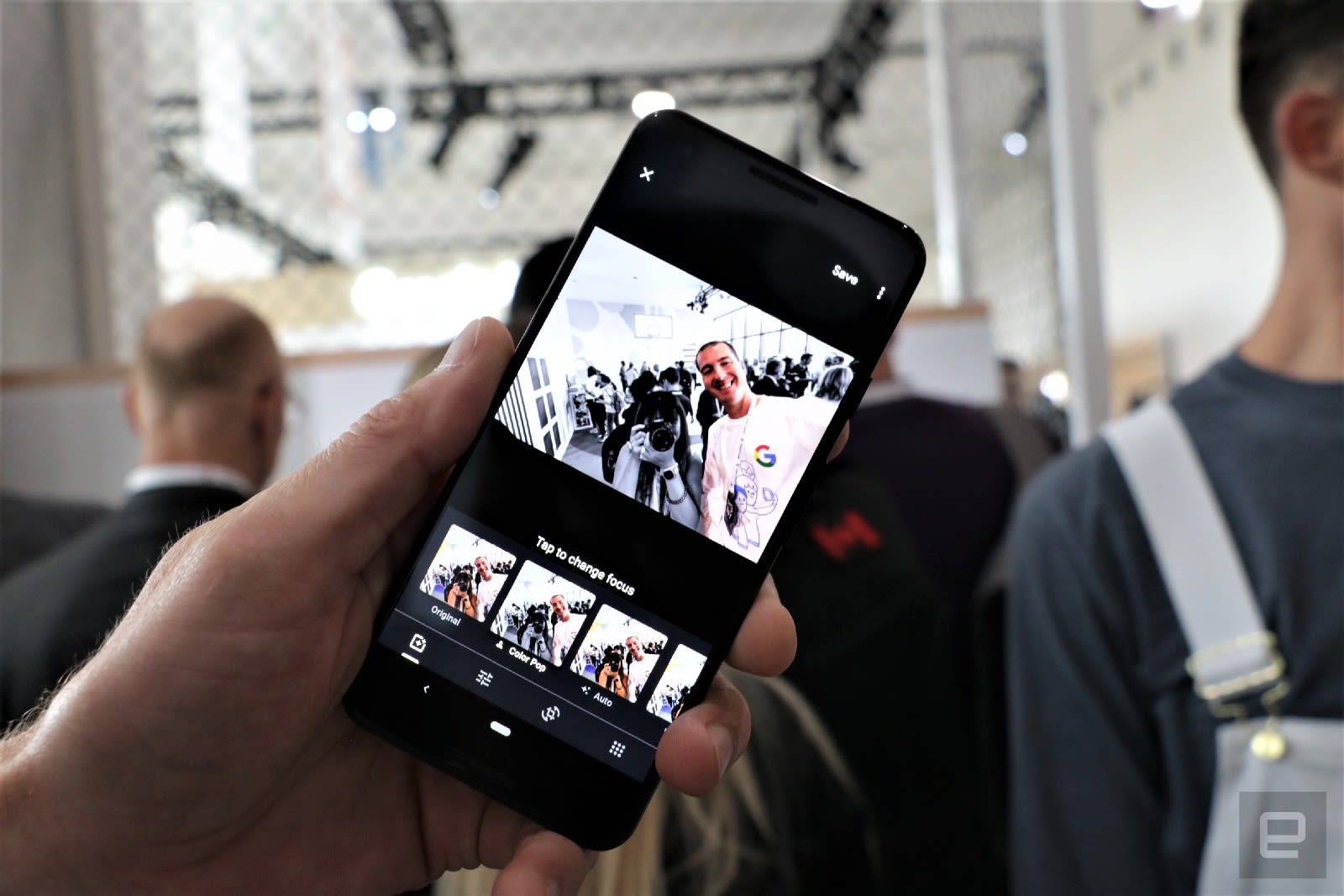 Another stylistic edit that I tried out is Color Pop, which uses Google's software to determine which part of the picture is most interesting and then turns the rest of the image black and white. In my test, the system kept Prunuske in full color and I was turned into a sad, monochrome part of the background. To be fair, a giant DSLR was blocking my face, so the software likely didn't register me as a person.

Something I didn't get to test in our bright demo room is Night Sight, the new low-light feature, but Prunuske did show me some before-and-after samples. The photos shot with Night Sight on the front camera not only appeared brighter and more detailed but also showed better colors. Since they're just demo samples, though, it'll be hard to evaluate how well this works in the real world till we get our review units. I also didn't get to see super-resolution at work, nor did we take enough photos here to see if the Top Shot feature is effective at suggesting the best snap in a series of burst shots.

Google is expanding its AI prowess from making restaurant reservations over the phone to helping you better deal with unwanted calls. The company said the Pixel 3 can answer itself, but it's more accurate to say the phone can prevent robocalls from reaching your ears. I wasn't able to check this out for myself, since the hands-on area was too noisy for a test on the phone I was playing with. At a separate booth, though, Google had a live demo on a Pixel 3 XL for us to try. 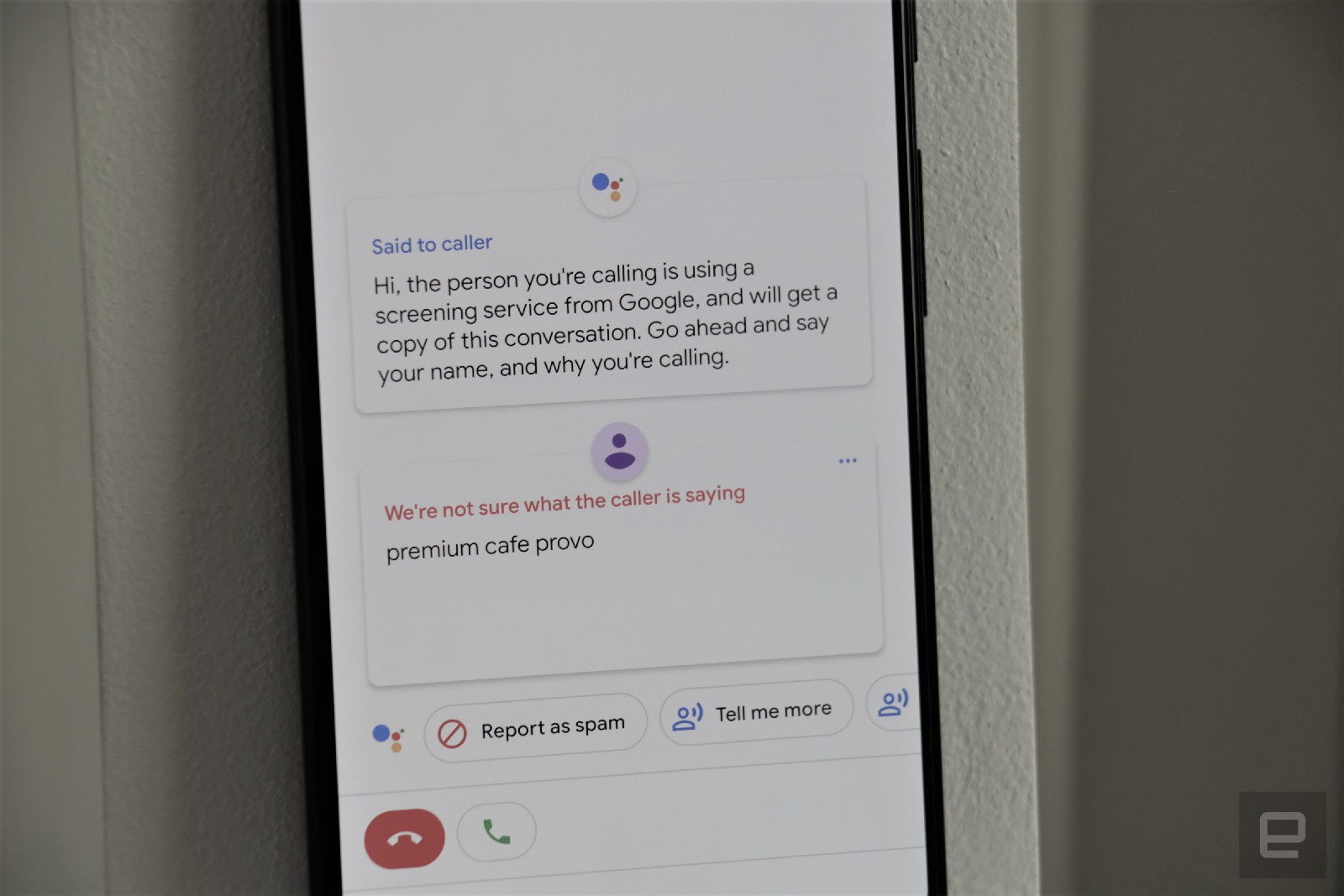 With the new Call Screen tool, you'll see a new option to screen calls in addition to accepting or rejecting an incoming call. If you choose that, Assistant will answer the phone and show you on the screen a live transcription of what the caller is saying. From the text, you can see whether this is a legit call or yet another one of the hundreds of credit card offers going around. Assistant will display some follow-up options, like "Report as spam," "Tell me more" or texting a reply. You can tell the Pixel 3 what to send back to the caller, though here in this noisy space the phone didn't do a great job of recognizing what the company's rep said. That's understandable though.

The Pixel 3 also comes with Android 9 Pie and the updates that OS brings. You'll see stuff like Flip to Hush, which mutes your phone's notifications when you put it facedown. There's also a clever interface software built into the lock screen when you dock the Pixel 3 into the new Pixel Stand that wirelessly charges the handset. When it's docked, the Pixel 3 dims its face but can still act as an alarm or dashboard for your smart home and music controls. Flip the phone so its face is on the back, though, and Do Not Disturb kicks in.

Surprisingly, in spite of all the leaks, there was still a lot to unpack with Google's latest flagships. This is by no means an exhaustive preview, so we'll have to wait till we can check out a review unit for a more detailed evaluation. We'll have that ready for you soon, though, so do come back to see if this phone is a worthy investment or upgrade. So far, though, I'm stoked.

In this article: android, gadgetry, gadgets, gear, google, googlepixel3, mobile, pixel3, pixel3event, smartphone
All products recommended by Engadget are selected by our editorial team, independent of our parent company. Some of our stories include affiliate links. If you buy something through one of these links, we may earn an affiliate commission.