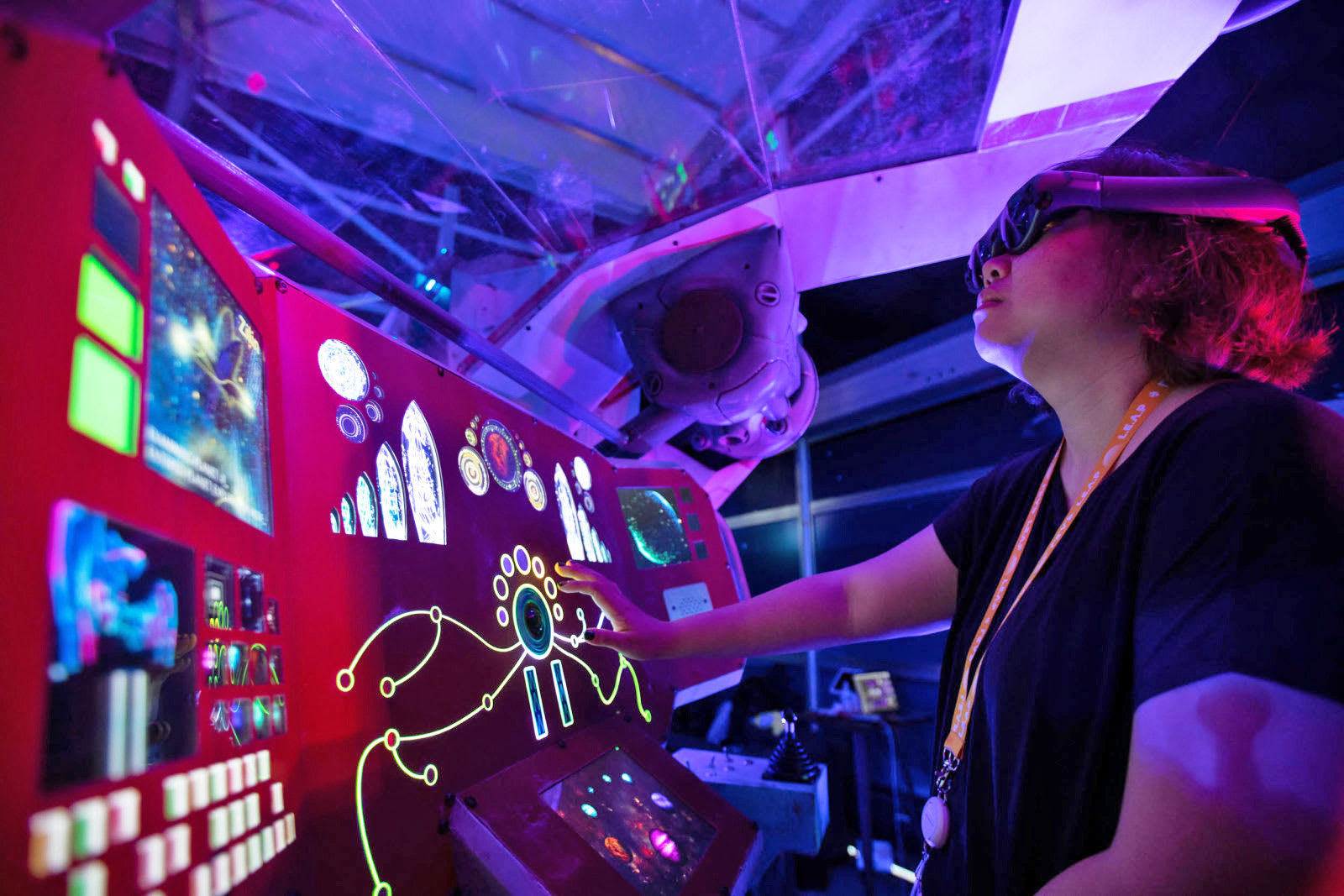 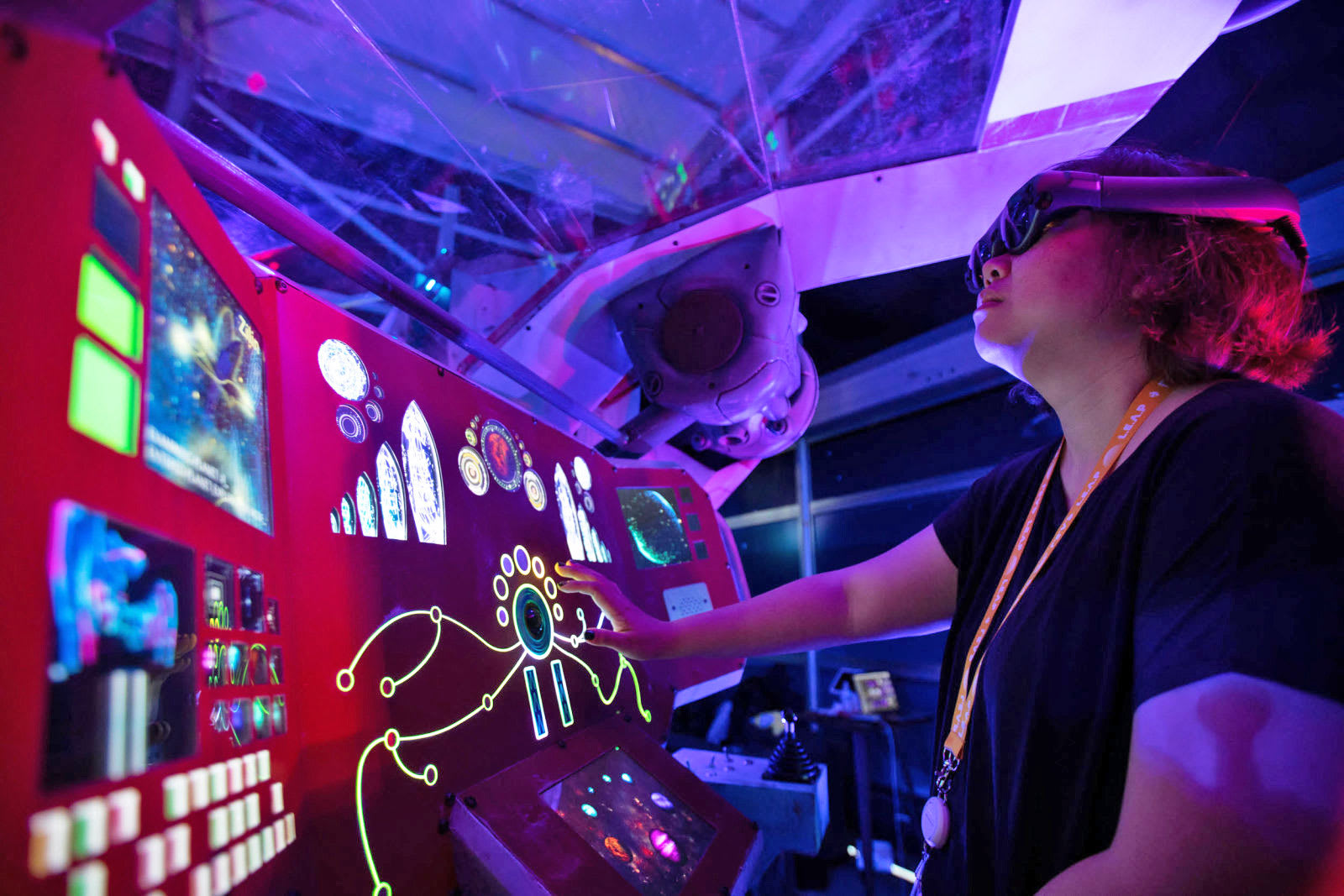 There were porgs. Porgs all around me. They cooed, flapped their wings and stared at me, as if begging for a treat. My dreams of being surrounded by the adorable alien birds from Star Wars have come true.

Okay, there were only two porgs. And they weren't real. They were actually a part of Lucasfilm's ILMxLAB demo at LeapCon, Magic Leap's inaugural developer conference, where I managed to try out several different augmented reality experiences with the company's recently revealed AR glasses. I watched a Shakespearean play, interacted with a digital human, planted seeds on a planet, rode a robot into the stars and, yes, I played with porgs.

If you're sensing a lack of theme, you're not wrong. Magic Leap's developer scene is so young that every demo still feels raw and new, like a baby just born into the world. In many ways, developers and designers are just throwing ideas at a wall and seeing what sticks. Some made video games, some created art, and others just came up with wild and wacky experiences.

One of the highlights was definitely the porgs, and I'm not just saying that because I'm a fan (Okay, that might've influenced it a little). In a faux living room, while wearing the Magic Leap glasses, I was summoned by C3PO to help gather up the mischievous creatures with treats and toys, such as a ball of twigs or a stuffed Chewbacca. As I threw the toys around the room, the porgs followed suit, running and flying after them, sometimes jumping on tables and chairs. Sometimes they hid away or were a bit temperamental, and I had to draw them out with snacks. I could also lift them up with a cursor and place them around the room. 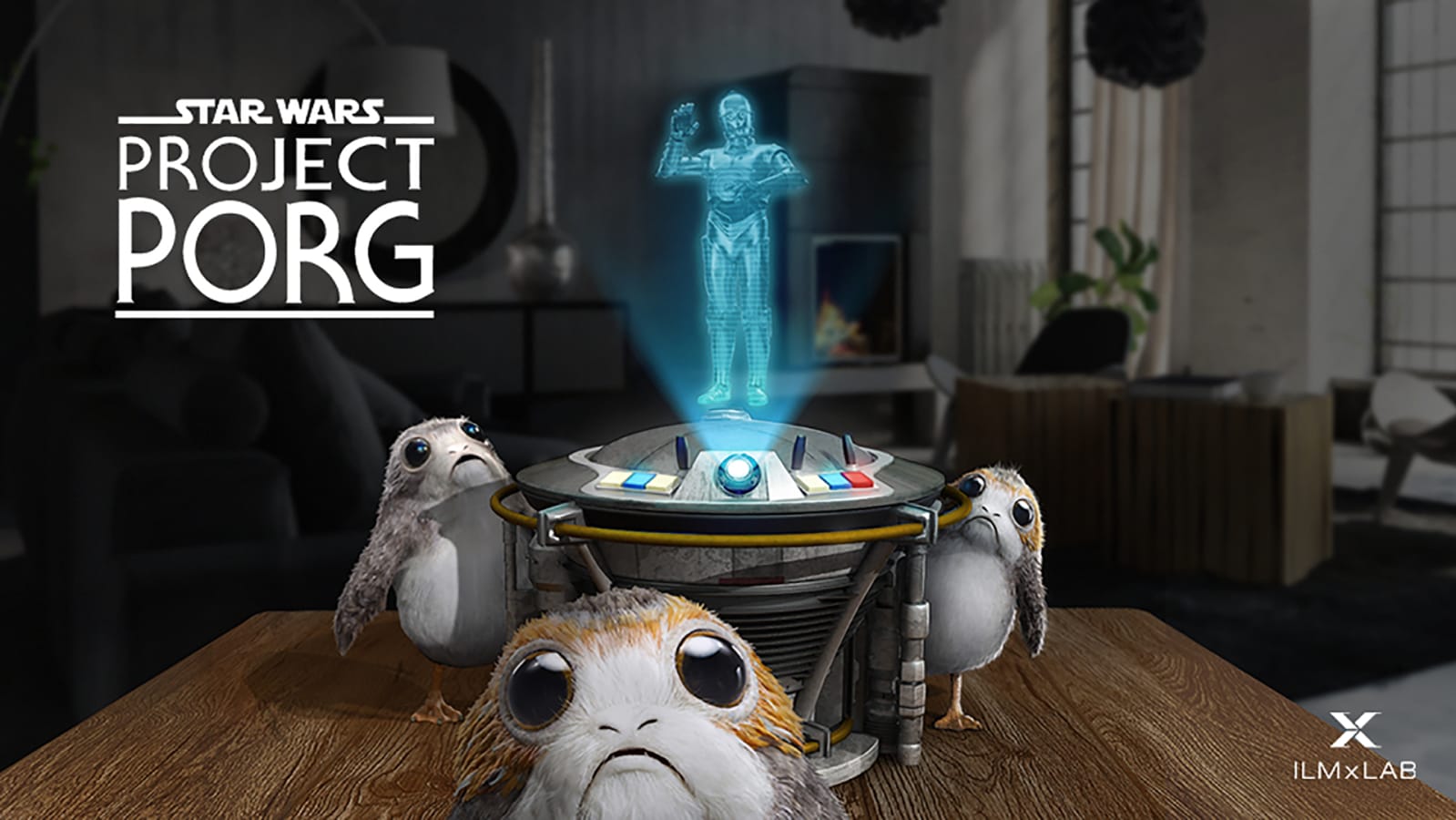 ILMxLAB started to collaborate with Magic Leap almost four years ago, and an interaction with C3PO and R2D2 was one of its early tests. After The Last Jedi debuted, however, the team felt like a fun interaction with porgs was an obvious project, if only because they were cuddly, cute and relatable. Mark Miller, ILMxLAB's executive creative producer, thinks Magic Leap is an interesting new way to tell stories, and bringing a piece of Star Wars into their home is a great start. "This demo is our suggestion to developers, that maybe stories can unfold gradually," he said to Engadget. "The interaction with these digital creatures can be spread out, not just over hours, but over days and weeks," he said, painting a scenario where we could be living with virtual porgs for a long stretch of time.

Ah, but the demo wasn't just about porgs. As I scanned the room, I noticed that the Sonos speaker was lit up, as well as the lamp with a Philips HUE bulb next to it. When I waved my cursor above the speaker and hit the trigger, the music changed (It was playing a Star Wars soundtrack, natch); the song title was drawn from the internet. When I placed a porg next to the lamp, it waddled over to it and change its color, and you could see the light and reflection affect the porg's shadow.

On the other side of the room, I positioned another porg down in front of a tabletop fan, which it then switched on. The porg stood facing it with its wings spread out, seemingly enjoying the breeze. Last but not least, when the TV started playing the latest Star Wars movie, the porgs flew in front of it, and started to relax, as if getting ready for their favorite movie.

The ILMxLAB demo will be available to Magic Leap owners today, but the smart home integration won't be a part of it. The latter was created really just for LEAPCon. "We want to inspire the developers," said Miller. "Here are the kinds of stories you can tell, by bringing digital characters into your everyday life." 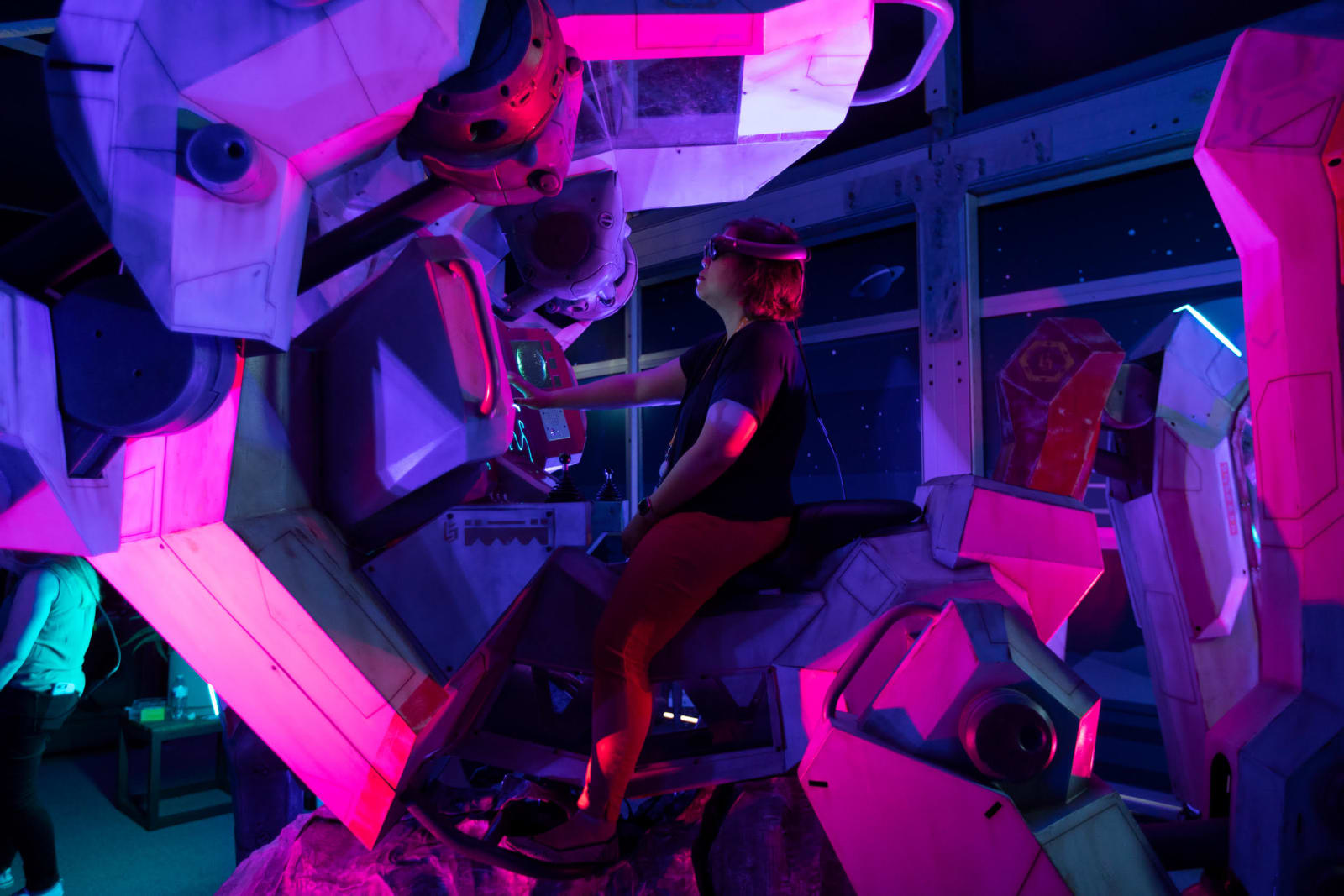 Another favorite demo of mine was actually more of an art installation. I was brought out into a special building in the LEAPCon parking lot, where Meow Wolf, an art collective from Santa Fe, New Mexico, had set up what looked like a giant robot with tentacle arms and feet. The whole setup was made in collaboration with developer Magnopus, and it will actually be part of a much bigger art exhibit set up in a 90,000 square feet space in Denver in the near future.

But before I could get into the robot, I had to meet a virtual astronaut. I went around the back of the room, donned the glasses, and there he was. Based on the reflection of his space helmet, we were both in space, apparently on the surface of the moon. He waved at me, hopped forward, and after a few minutes of interaction, gave me a red balloon as a farewell gift.

I was then invited to climb into the cockpit of the aforementioned robot, which a Meow Wolf spokesperson informed me was supposed to be a Mech transport and I was a space explorer called a Navigator. After I sat down and put on another pair of glasses, the spaceship came to life. The dials and controls lit up in multiple colors, and a gloriously colorful 3D star system appeared before me. The planet Eemia is in decaying orbit and encased in ice, my helper said, and it was my job to arrange the planets and suns again in order to thaw it out.

After each successful planet alignment, I was treated to fantastic galactic encounters like an exploding star, a floating rainbow super cube and, last but not least, a psychedelic wormhole through space. I kept thinking this must be what being on acid feels like. 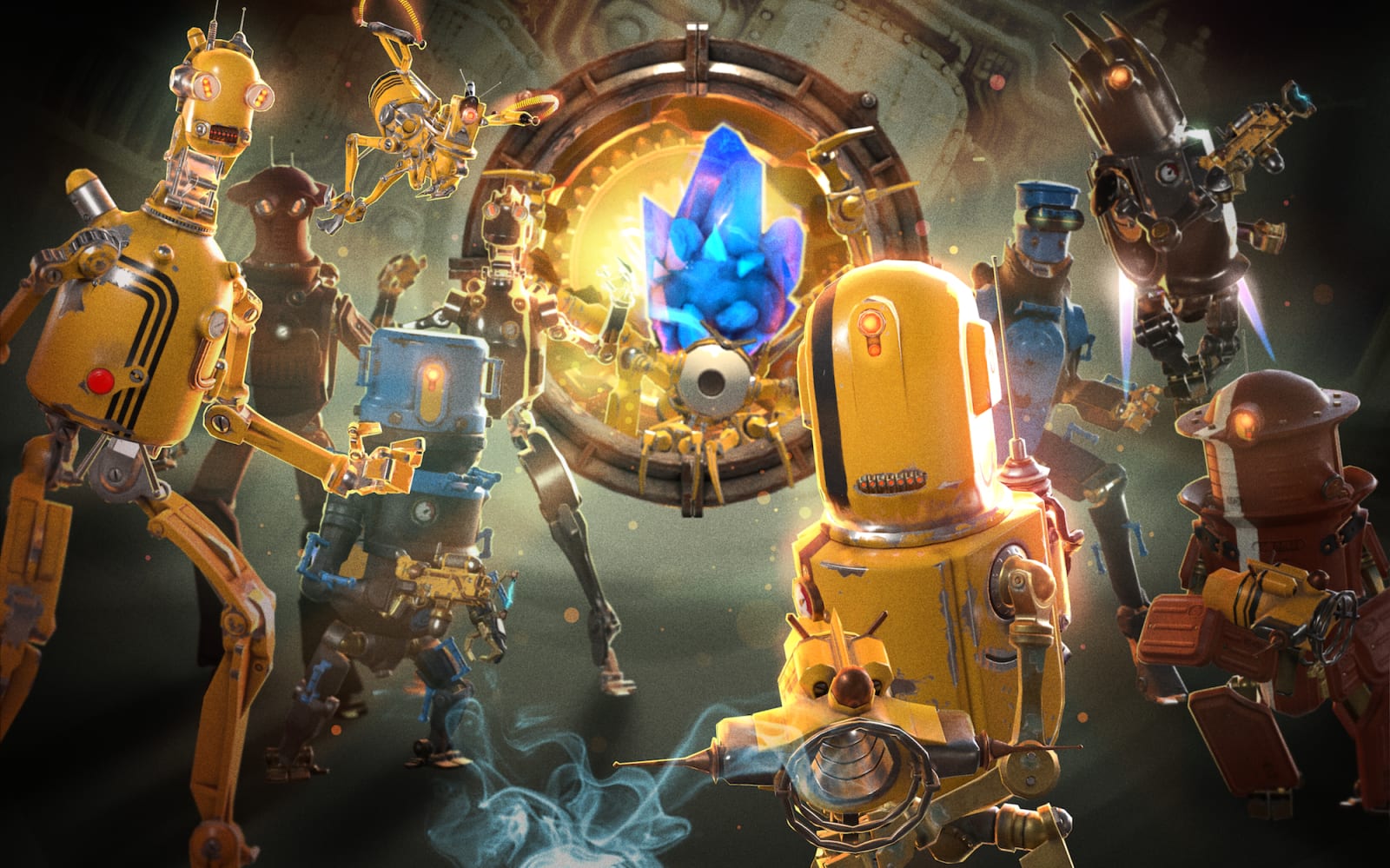 Instead of using the Leap's hand controller for aligning the planets, however, I used the controls on the spaceship, which are all touch-sensitive. Tapping a round circle would select a planet, for example, and sliding my finger on a circular dial would rotate it in orbit. Using these tactile controls really helped bring the experience to life for me, more so than other virtual or augmented reality experiences I've had. Even though Meow Wolf's demonstration here is very unique to the art exhibit, it does show how powerful tactile controls can be to immersion, especially in an augmented reality environment where you're still in the real world.

Art continues to be a strong theme in a few other demos I tried. One was virtual theater care of the Royal Shakespeare Company, where I saw an actor enact Shakespeare's "Seven Ages of Man" while a digitized tree changed colors and form behind him. Another was an interaction with a surprisingly lifelike CGI character called Mica, who stared, smiled and squinted at me, making me feel like I was being examined. She gestured me to hang a real picture frame, which I did. She then walked over to it, painted Rene Magritte's Treachery of Images on it and proceeded to pluck the pipe out of the picture into her hands. Both were examples of how humans can be digitized in augmented reality, and I can imagine how this could be used in museums or educational tours to make those experiences more immersive and lifelike.

Some demos I had are likely experiences you've heard of before. Funomena's Luna: Moondust Garden is a version of the company's popular VR game but made in an augmented reality space, where I planted seeds on the floor and watered them so they could grow. I used Wayfair Spaces to plan out furniture placement and home decor, dragging and dropping different pieces in a way that feels a lot more realistic than just using an AR app on a phone.

There were other AR experiences that I didn't even get to try. Weta Workshop introduced Dr. Grordbort's Invaders for the Magic Leap, where you can fight off steampunk bad guys coming out from behind your living room walls. Air New Zealand unveiled a board game of sorts called Fact or Fantasy New Zealand, where players can use a physical 3D map in conjunction with the Magic Leap glasses to learn more about the country thanks to digital whales and a friendly virtual Hobbit.

Of course, in order to even try all of this out, you need a pair of expensive $2,295 glasses, or in the case of the Meow Wolf spaceship, you'll have to travel and pay the price of admission to the art exhibit. It remains to be seen if augmented reality, whether it be by Magic Leap or someone else, will ever be affordable and accessible enough for the masses. Until then, let the experiments continue.

In this article: ar, augmentedreality, gear, leapcon, magicleap, personal computing, personalcomputing, tomorrow
All products recommended by Engadget are selected by our editorial team, independent of our parent company. Some of our stories include affiliate links. If you buy something through one of these links, we may earn an affiliate commission.