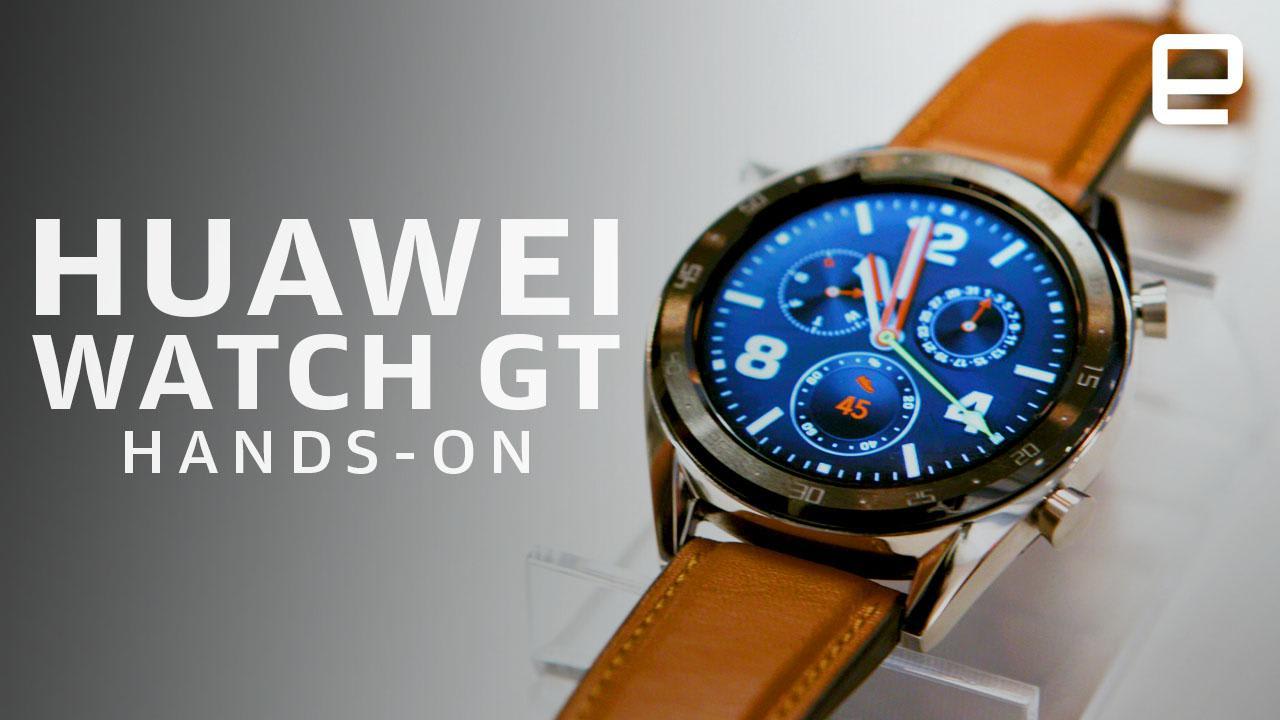 Looks like smartwatches aren't going away anytime soon, and may actually be coming back to haunt our wrists. With companies like Google, Samsung, Apple and Qualcomm all launching new devices (or at least some software and hardware updates), interest in the category is clearly on the rise again.

Huawei is joining the fray with the Watch GT, a familiar-looking smartwatch that, for some inexplicable reason, relies on a proprietary operating system instead of Wear OS. The company is making bold claims about the Watch GT's 30-day battery life while emphasizing the device's sports-tracking prowess. Given how much we liked Huawei's previous watches, I was excited by its latest attempt. But based on my time with an early unit, I'm not sure the new smartwatch will stand out in this year's crowded wearables space. For one thing, the Watch GT just looks kind of generic. Its stainless steel case and ceramic bezel feel nice, but both its color options (black face with black strap or silver face with brown leather band) are underwhelming. Huawei said it used a classic design here, and the aesthetic certainly is very familiar. This watch looks nearly identical to the older Huawei Watch and very similar to the Gear S3 Frontier, except with two crowns instead of the two rectangular buttons on Samsung's device. Just know that at a chunky 10.6mm thick, this feels better suited for bigger wrists.

Under the watch's case is the heart-rate sensor, which Huawei said it tried to keep minimal. I don't care very much about that though, since it's something that rarely sees the light of day, what I did like was the bright 1.39-inch AMOLED display, which was plenty responsive as I flicked through apps and faces on the device's proprietary Lite OS.

Huawei's own platform, which was launched as an IoT play in 2015, feels like a mashup between Samsung's Tizen and Google's Wear OS. Swiping sideways scrolls through widgets while pressing the top and bottom buttons launch workout sessions and all apps respectively. The Watch GT offers a lot more sports modes than the competition, mostly because it's able to differentiate between indoor and outdoor activities using the GPS signal. For instance, when you're running inside your gym on a treadmill as opposed to at your neighborhood park, the watch will know and only map your route for the latter. It also offers a training mode to coach beginners, and is supposed to be smart enough to know things like your favorite swimming stroke and use that as the basis to track your laps. Since we weren't able to take the preview units out for a run or swim, we couldn't put any of this to the test yet.

Like most other modern smartwatches, the Watch GT comes with a bunch of sensors that better equip it to monitor your activity. It has a tri-GPS system (GPS+Glonass+Galileo/Beidou) and an altimeter in addition to the six-LED optic heart-rate sensor to better measure your position, elevation and pulse. In fact, Huawei claimed it can more accurately monitor your position even in dense cities with buildings that could interfere with GPS signals because it taps the Chinese Beidou satellite. The Apple Watch Series 4 also has a tri-GPS (GPS/Glonass/Galileo) system, while the Galaxy Watch only has GPS and Glonass. If you're a city runner who wants very accurate info about your route, this could be a real selling point.

Another potential edge Huawei might have over its competition is its heart-rate monitor. The Watch GT uses AI to understand where and how it's sitting on your wrist and uses that data to clean up information from the sensor. This is supposed to help it deliver a more accurate reading, but obviously we haven't had a chance to verify that yet. I can say that it was impressively fast at measuring my pulse, though.

Like any fitness-focused smartwatch worth its salt this year, the Watch GT can also track your sleep and not just tell you how long you were passed out, but also the quality of your slumber. Despite my overall exhaustion and lack of coffee, I actually managed to not fall asleep during our hands-on at all, so I couldn't test this feature either. 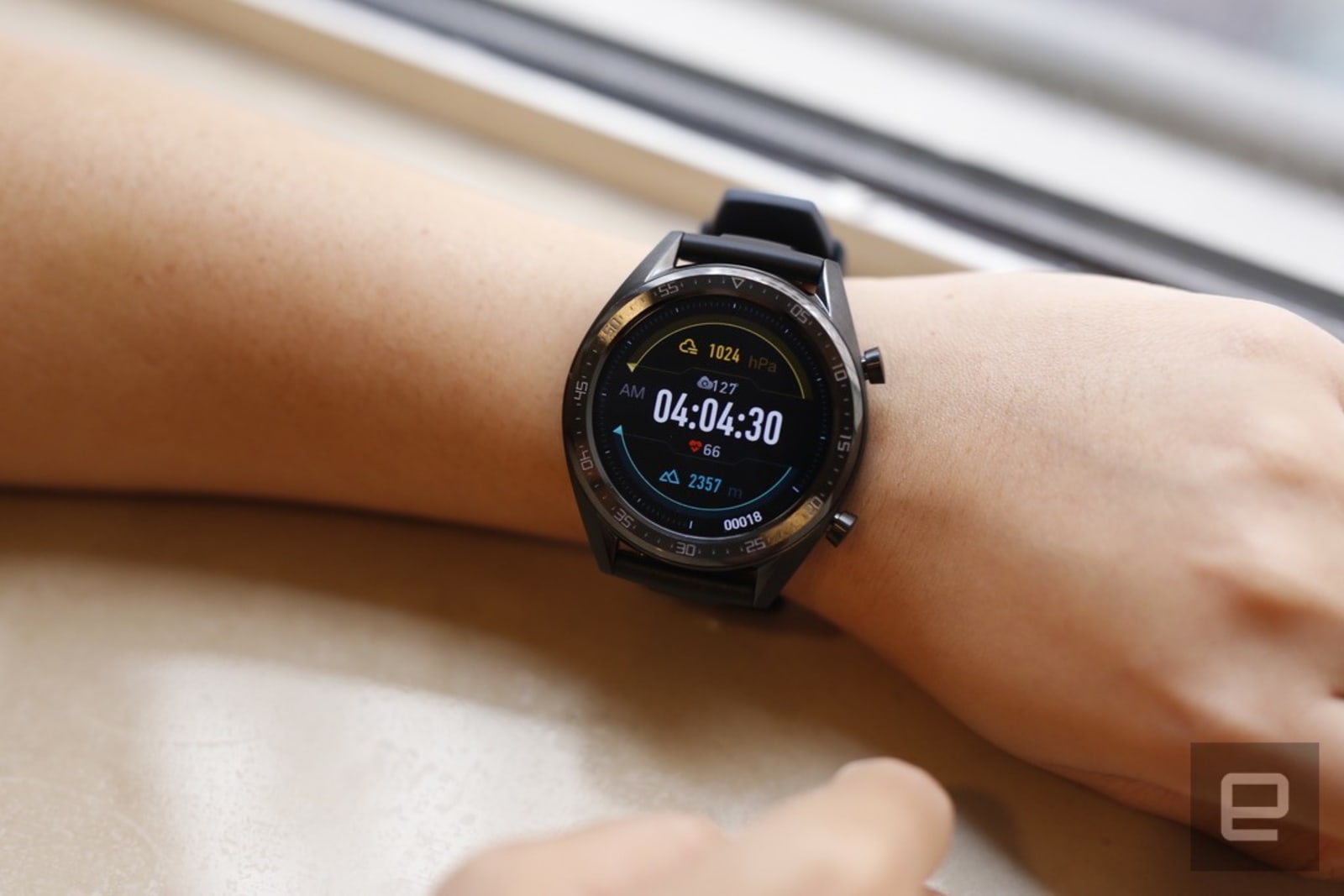 Battery life is the big focus here, with Huawei promising that the Watch GT will last up to two weeks with heart-rate monitoring on and if you exercise for about 90 minutes per week. For more intense users, the watch will last about 22 hours with GPS and heart-rate monitoring enabled and the screen turned on. So, keep that in mind before heading out on your next ultramarathon. And we've got great news if you lead a completely sedentary life: With the heart rate monitoring and GPS turned off, the watch is supposed to last 30 days.

That's seriously impressive if true, and Huawei says it was able to achieve this through a combination of AI and a suspiciously unnamed custom CPU. Much like other chipsets that use Big.Little architecture, Huawei's mystery chip has a lower speed, energy-efficient component and a higher speed, power-intensive one. The AI decides which of the two to use, sending dynamic tasks like exercise-tracking to the bigger chip and static processes like showing the always-on display to the smaller one.

That architecture is just like what Qualcomm offers on its latest Snapdragon Wear 3100 chipset, which promises similar battery improvements. The watches using that CPU haven't launched yet, so we don't know exactly how effective the revamped architecture is right now, but it's certainly promising. With the Watch GT, Huawei is telling the world it still has a horse in the smartwatch race. But the company's decision to use its own OS is an unsettling one. From my brief preview, I don't see the appeal of LiteOS. Though, that might change after more time with it. For now, though, I'm just curious about whether the Watch GT will even go on sale in the US. Chances are you'll be able to find in online, perhaps through Amazon, at some point, but whether it'll find an audience here is something else.

Update: We don't know exactly where and when the new Huawei smartwatches will be launched, but we do know the Sport and Classic models will retail for €199 and €249, respectively.

In this article: gadgetry, gadgets, gear, huawei, huaweiwatch, huaweiwatchgt, liteos, smartwatch, wearables
All products recommended by Engadget are selected by our editorial team, independent of our parent company. Some of our stories include affiliate links. If you buy something through one of these links, we may earn an affiliate commission.