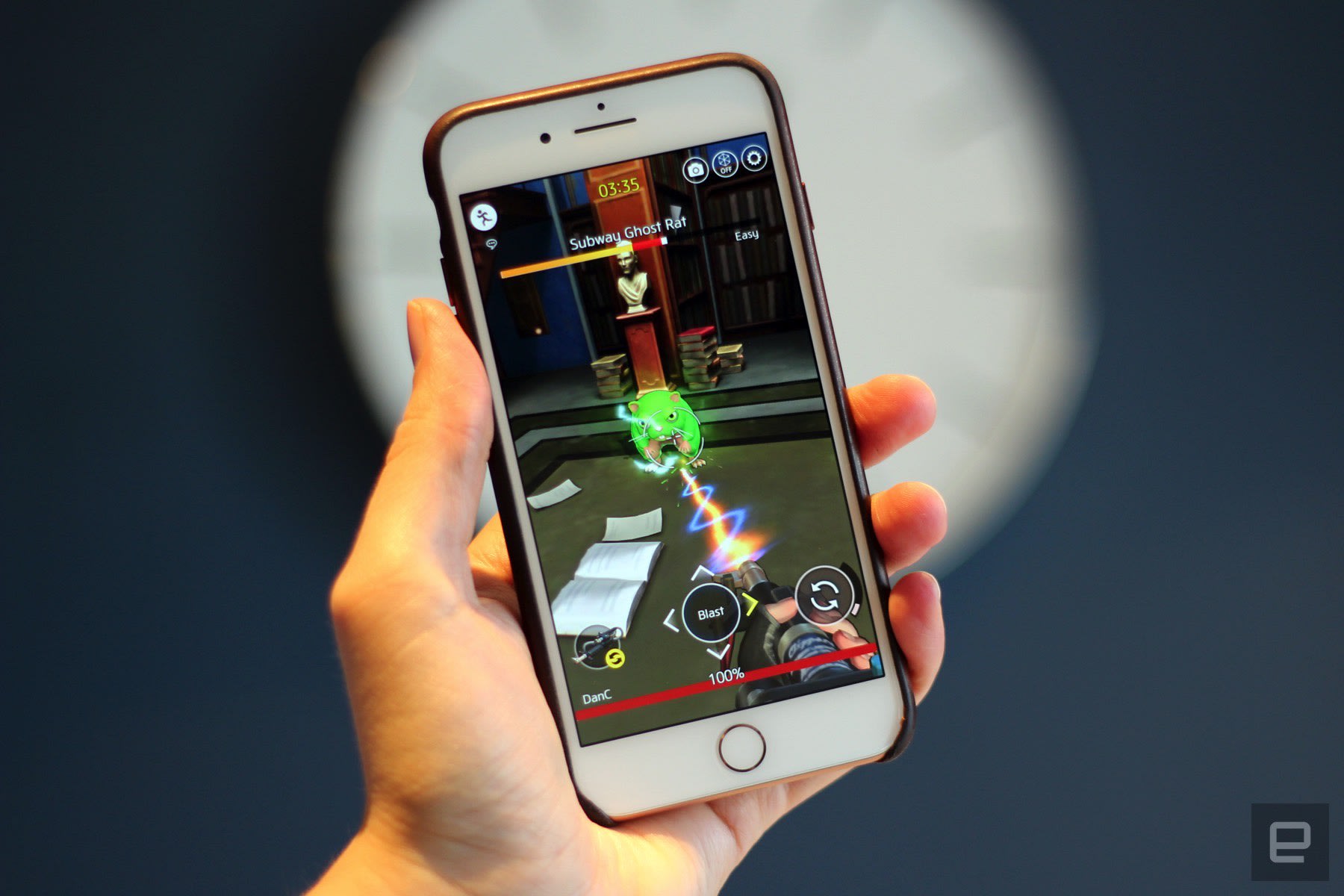 Ghostbusters World is a mobile game from Ghost Corps -- the Sony company that "owns" Ghostbusters -- and South Korean game developer 4:33. The developer is no stranger to big-name franchise games, and released DC Unchained earlier this year. Here, however, the company has sought to bolt the franchise onto something more successful: Pokémon Go.

It won't take players long to spot the number of similarities between Ghostbusters World and Pokémon Go, surely the apex predator of GPS-based mobile AR games. In Go, users wander around their locale catching monsters Pokéballs. In World, players wander around catching ghosts with their Proton Packs and Ghost Traps. Both games can be played in either a simulated environment or using your phone's camera for augmented reality, too.

Once players have customized their avatar, they're tasked with learning how to use the Proton Pack and Ghost Trap. The difference between here and Go is that you need to shoot the ghosts (and counter their attacks) until they're weak enough to be caught. Once you've done so, you can throw out a trap and drag them into its path. More powerful ghosts can escape the trap with its strength recovered, forcing you to re-weaken them before a second attempt.

There's one neat little thing you can do, which is to use your weapon to push a ghost into the air. Reach a sufficient altitude and a little Slam button appears on screen, which will drag the ghost back to Earth with a thump. Not only is it a neat little way to vary your attack, it's also a wonderful stress reliever after a hard day. As the game progresses, you'll acquire different weapons, including a shotgun that can kill a ghost rather than trap it.

It appears that the only thing that has been preserved from the 2016 reboot / remake is the Proton Glove. There isn't -- yet -- any evidence that Gilbert / Yates / Holzmann or Tolan are in the game whatsoever. Instead, the only characters you'll encounter in story mode are the original quartet: Venkman, Stantz, Spengler and Zeddemore.

As you travel around, catching Pokémon ghosts, you'll be tasked with visiting PokéStops Dimensional Doors. Doing so will offer up little treats, like additional experience bonuses and more gear, like spare traps. Traps, you see, are finite in the Ghostbusters World world, and you'll need a supply of them to keep playing the game. You can also place your own door at a location of your choosing -- like your own home -- to ensure a constant stream of treats.

And that's the first layer of the game, with you wandering around trying to catch 'em all and fill up your collection. You have both a bag, into which you can collect a small quantity of ghosts, and a Pokédex Tobin's Spirit Guide. There are 150 (ahem) otherworldly beings to collect, and presumably that number will increase over time if the game becomes a world-beater.

There are other elements that match, or at least sail close to the model left by Pokémon Go, including egg-hatching (Ecto Sphere) and Inventory Upgrades and Research. This being a mobile game, you can either wait for the time-gates to expire, or pay to speed things up.

Once you have a collection of ghosts, it's time to go do something with them, and here the game takes an abrupt left turn. Go into Story Mode or the Ghost Dimension, and you're playing a very different title than the one you've just left. Because here, Ghostbusters World becomes a turn-based battle game in which a quartet of ghouls go up against the underworld.

Sadly, I'm something of a turn-based refusenik, finding them to be everything I loathe about video games. Tediously lining up attacks and strategies and watching them play out, one by one, afterward. The hidden, digital dice rolls that dictate if my plans succeed, the fact it all takes place in stilted, take-your-tun runs. I didn't like playing Heroes of Might and Magic, XCOM: Enemy Unknown or Advance Wars and I didn't enjoy this.

Thankfully, you can let the CPU battle for you, and run on different speeds, something I've taken plenty of advantage of. And you don't really need to dive too hard into this mode if you just want to play Pokémon Go featuring the undead.

Does it matter if one piece of entertainment is fundamentally similar to another? If we're still entertained by it, then probably not. Hollywood has a knack of releasing two movies with similar topics in the same year,while recent proliferation of Battle Royale game titles prove you can have too much of a good thing.

It gets repetitive. And that's the problem with Ghostbusters World, in which its main gameplay mechanics have been done before, and better, elsewhere. Unfortunately, the creators have chosen to make the game less snackable and significantly more complex than other mobile titles. Imagine walking around, with one eye half-on your phone, as you try to navigate the complex mess of menus. You could tolerate it on a desktop game (a decade ago), but on a smartphone, it's painful.

It's a fine line to walk, because if a mobile game is too flimsy -- like The Walking Dead: Our World -- then it'll be too trivial to invest your time with. Certainly, Ghostbusters World is a game that you'd be more comfortable playing while sat down, on the train or bus or in a car. Another point: How invested are people going to be in catching a number of fairly stock ghost characters? At least with Pokémon, a number of the creatures have their own fanbases -- how many folks would go to the mats for the pantheon of non-Slimers?

Perhaps I'm being a little too negative, and certainly the company sees its breadth and depth as a positive. A representative told me that World's variety "encourage different players to play the game however they want to play." Which is fair, and I would hope that the game slims down the fussiness of its menus to make playing on the go easier. Right now, I can see its potential, but I'd like it a whole lot more of it was less of a chore to play.

In this article: AR, av, gaming, Ghostbusters, GhostbustersWorld, GPSGame, mobile, PokemonGo, video
All products recommended by Engadget are selected by our editorial team, independent of our parent company. Some of our stories include affiliate links. If you buy something through one of these links, we may earn an affiliate commission.