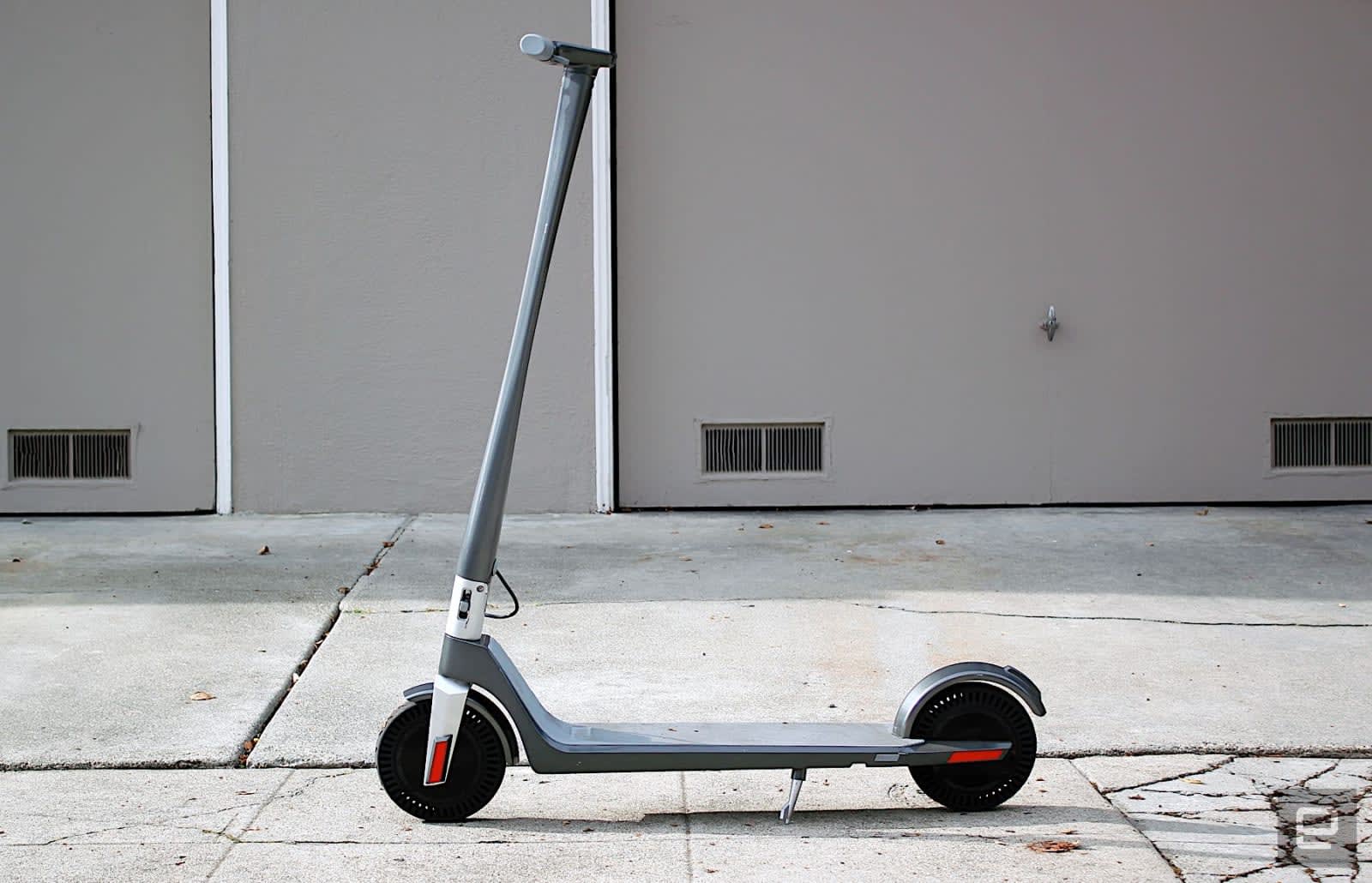 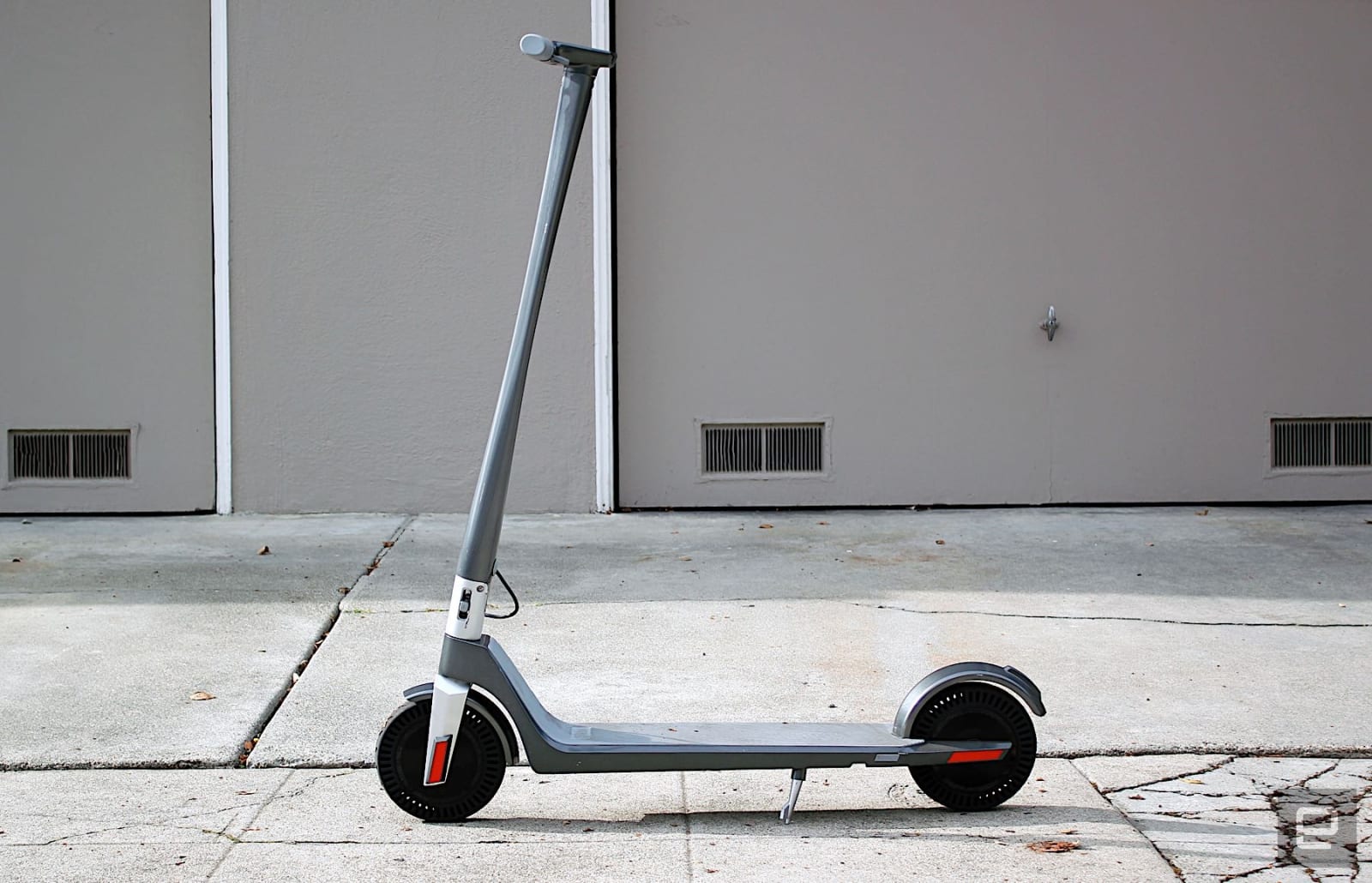 I place one foot onto the narrow deck and briskly push with the other. As I press a lever with my right thumb, the handlebars I'm gripping jolt forward. Fortunately, the handlebars aren't attached to a speedboat -- they're part of the Unagi scooter I have just tried for the first time. At 15.5 mph, it's not the fastest scooter (some can reach nearly double that), but it's likely one of the most capable at hills (more on this later). Potentially a big selling point here in The Bay Area with its notorious inclines.

If you live in a large city, there's a good chance you're familiar with the electric scooter craze. Earlier this year, the streets were suddenly (and literally) littered with them. Motorized scooters, on paper, are a good idea. They promise to ease congestion created by cars and ride-sharing services while offering a fun way to crush your commute.

There have been problems, though. The aforementioned "littering" of scooters is no joke, and is frustrating for everyone (riders, the companies behind them and the city administrators). While renting them is affordable (five minutes cost about $1.90, compared to roughly $8 in a Lyft, according to my ride history), the cost soon adds up if you use them daily (and twice). Personal scooters are becoming more common as a result, and the latest to arrive is the aforementioned Unagi. 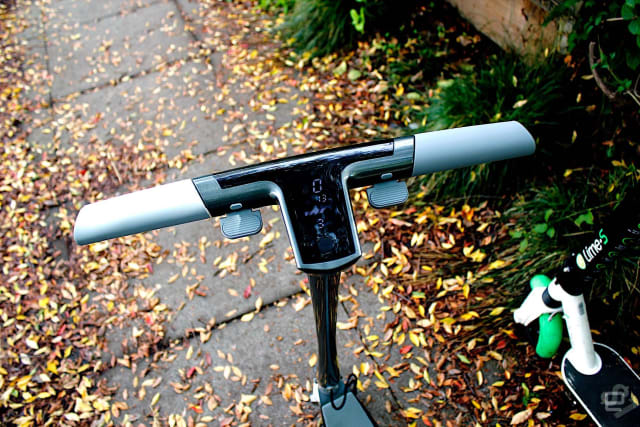 The company behind it thinks the Unagi solves the woes of renting and hopes its stylish looks and power options (250W single motor, 450W dual motor) will convert anyone who thinks scooters aren't particularly cool (I am one of those people). Priced between $975 $740 and $1,175 $890, it doesn't come cheap, but the question is: Is there any advantage to a "high-end" scooter? Or is this just the inevitable peak of a passing trend?

As scooters go, the Unagi is a fine-looking machine. The paint job is more like something you'd find on a luxury car, and the dual-motor option (the one that caused that jolt I mentioned) promises to pull you up bigger hills than the competition (15 degrees, 6 for the 250W model). The general design is also far more stylish than its rental rivals.

The real problem (for me) with motorized scooters is that, at least in Oakland, where I live, you have to ride them on the road (not the sidewalk). Being on the road means donning a helmet (please) and having the confidence in other people to avoid mowing you down -- something I do not have. That might sound overly cautious, but after all, I am male, over 20 and live in California, and statistically, therefore, at risk.

The Unagi doesn't have any extra safety features per se, but its power (in the 450W edition at least) does mean it can pull away quicker than the Limes and Birds that I've tried. I found that this usually gives you enough of a headstart to get a few yards in front of vehicles at the lights, so I at least felt more visible.

For me, though, owning your scooter introduces a different problem: carrying it around (especially on public transport). With a rental, you ditch it once you get to your destination. If you own it, you have to mule it with you. At 22-24 pounds (depending on the model), the Unagi isn't too heavy, and it folds down neatly, but on a crowded train, it's still something of a burden. It's either getting in the way of people's feet, or you're forced to awkwardly hold it upright the whole time. So you're trading off one convenience (guaranteed access to a good scooter) for another (that scooter's coming with you everywhere).

That same problem is obviously less of an issue if you don't have rentable scooters where you live. In that case, a personal ride like the Unagi suddenly makes a lot of sense. Given that Lime, Bird and co. are typically in larger cities, there's a large slice of America that might be in the market for the very solution that Unagi is offering. 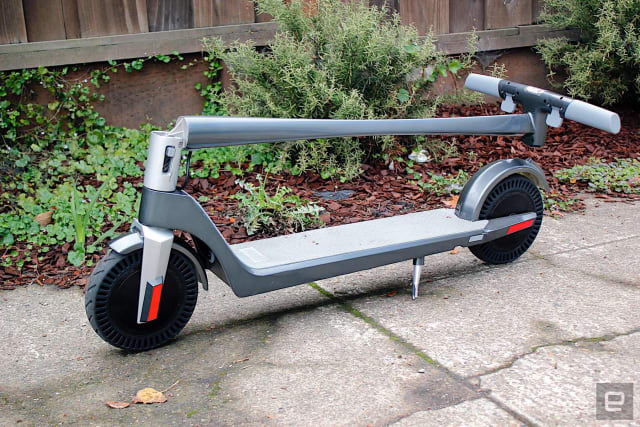 Even if you do have rentals where you live, there are still lots of reasons you might want to own one. For starters, you'll never need to hope there's one nearby. I tend to use Lime most often for the very last leg of my commute home from the metro station, less so in the morning, though. Part of this is by choice -- I like to start my day with a walk to help clear the cobwebs. It's also part practicality: Scooters are easiest to find near transit hubs. My apartment in the morning? Not so much.

Having one that is yours eliminates that anxiety. Plus, you'll never have to wonder if it's in good working order or not. There's also general convenience. The other day, working from home, I realized I had nothing for lunch. I ordered some takeout online, then hopped on the Unagi to collect it. I got home and my lunch was still nice and hot -- minor chores like this suddenly become fun (and more practical).

If you don't have much experience on motorized scooters, the Unagi has three speed modes to ease you in: beginner, intermediate and advanced (with top speeds of about 9, 12 and 15 mph respectively). The Unagi has a stated range of 15.5-miles, which is plenty for most people. But you can eke out slightly more by forgoing speed in beginner/eco-mode. Charging takes about five hours, which should mean leaving it on overnight or topping it up in the office. 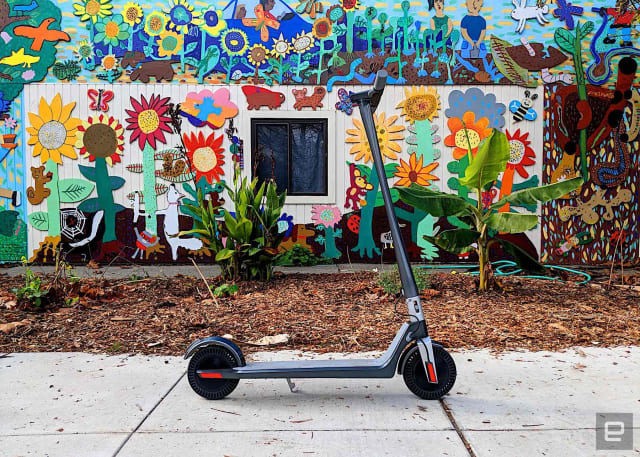 The real question is whether a sleeker design and a little more power (on the dual-motor model, at least) are enough to steer you away from more-affordable options. Lime and Bird use scooters made by Segway and Xiaomi (among others). Xiaomi's Mi scooter costs $599, has a higher top speed (18ish mph) and also folds down. Segway's ES4 costs a bit more at $777 but has the same top speed, and a whopping 28-mile range. Admittedly both are a bit dorky-looking, but you can only look so cool on a scooter anyway.

For me, what the Unagi represents more than just a higher end scooter. It's about personal transportation growing up. Scooters earned a bad rep by cluttering our streets, being unreliable and being abused. Alternatives like electric skateboards aren't for everyone and don't always cope with potholes so well. When I started testing Unagi, I was interested in how it compared to its rivals, but I realized it was more about making scooters a desirable consumer product.

If we start looking at scooters as valuable items, then maybe the issues we've seen with rentals would decline. This doesn't mean we should all buy instead of rent, but maybe we'll start focusing on their positive points (reducing traffic and better commutes) more. The fact that they are just fun to ride doesn't hurt, either.

Source: Unagi
In this article: bird, engadgetoutdoors2019, escooter, gadgetry, gadgets, gear, lime, scooter, transportation, unagi
All products recommended by Engadget are selected by our editorial team, independent of our parent company. Some of our stories include affiliate links. If you buy something through one of these links, we may earn an affiliate commission.