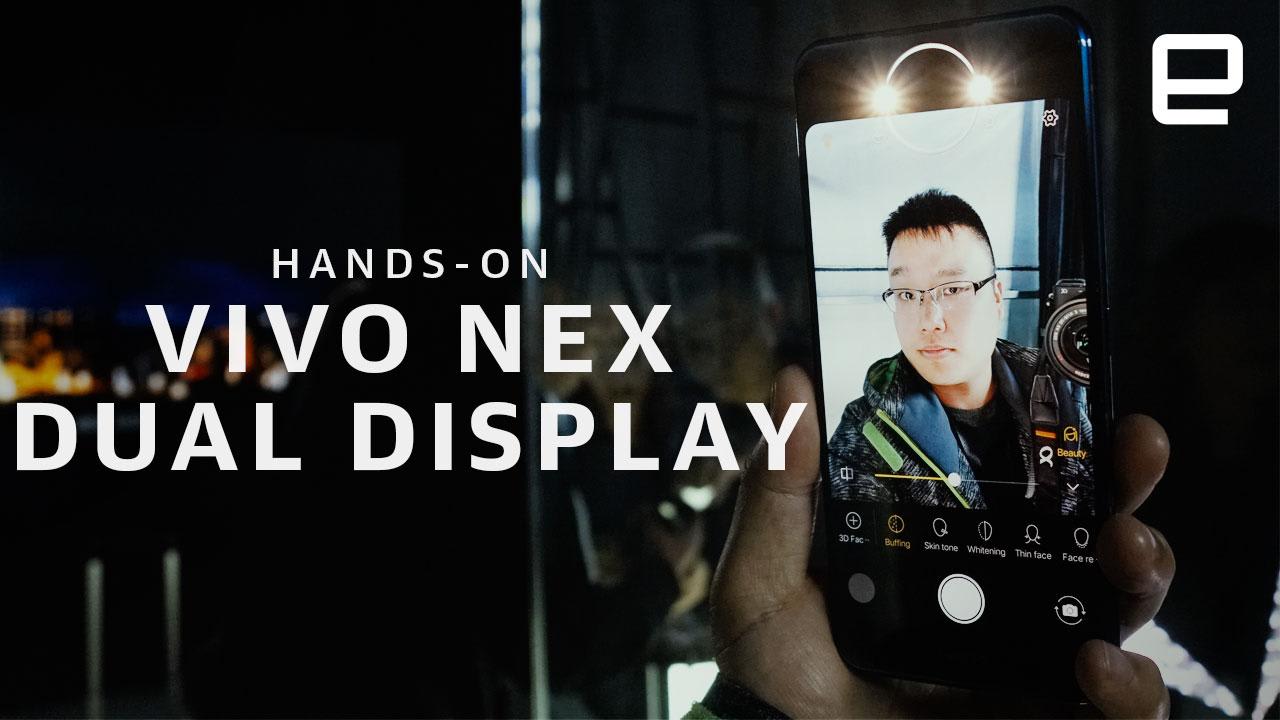 While Vivo is still a largely exotic brand for many of us, you may remember it as the first manufacturer to both tease and release a truly bezel-less smartphone. And of course, Vivo's NEX S gained extra street cred thanks to its pop-up selfie camera plus in-display fingerprint reader. Just months later, the Chinese company is back with a follow-up model dubbed NEX Dual Display Edition, and as the name implies, it packs a screen on both sides of the phone, just so that it can ditch the pop-up camera -- a cool but physically vulnerable feature -- while still avoiding the notch on the main screen. The idea here is that you can stick to that sweet bezel-less display for your everyday tasks, but when it comes to selfies or video calls, simply flip the phone over to make use of the 12-megapixel main camera (f/1.79, Sony IMX363 CMOS), along with the smaller screen below it. Both the 6.39-inch and 5.49-inch AMOLED touchscreens pack a 1080p resolution, which is lower than those Quad HD offerings from others but still plentiful for most users.

Sadly for Vivo, it's not the first company to realize this concept. The Nubia X from late October also makes use of a secondary display for selfie purposes as well as personalization and adding game controls (think rear touchpad), but it uses a smaller 5.1-inch OLED panel with a lower 720p resolution instead. So Vivo still wins here, at least on paper; and yes, its new NEX supports those use cases for its rear display as well.

It's also pretty easy to switch between the two screens on this NEX: You can either pull out the control center from the bottom and tap the shortcut at the bottom right, or enable the three-finger gesture in settings and drag from left edge of either screen, or quickly tap the left multi-purpose button to toggle the switch (long press to summon Vivo's Jovi assistant) -- this is always the left button no matter which screen you're using, with the one on the right serving as the power button. 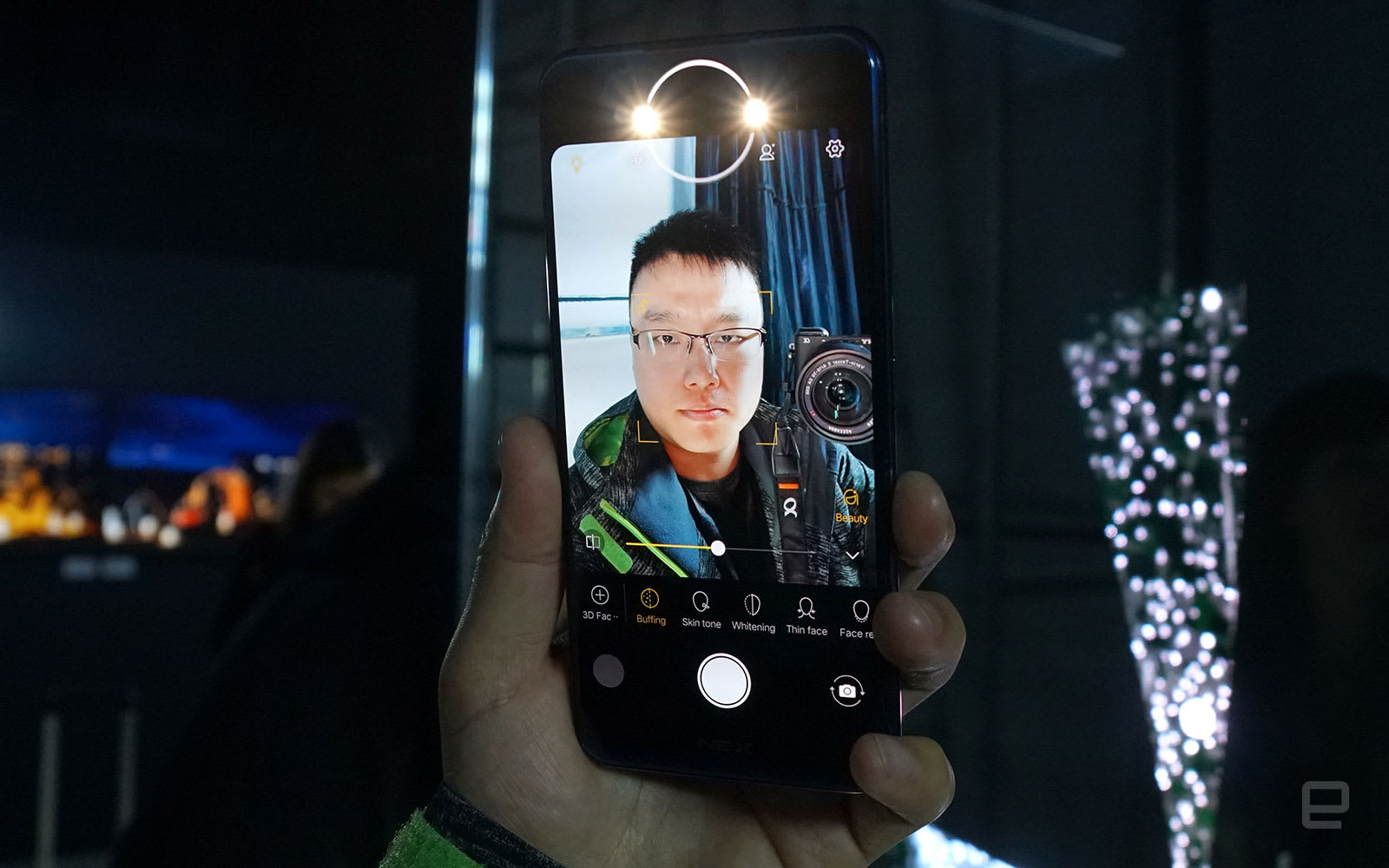 In addition to the 12-megapixel camera, 2-megapixel assistive camera (for bokeh and enabling "Super Night Mode") plus the usual LED flash, the NEX Dual Display Edition offers a "Lunar Ring," which acts as a selfie soft light surrounding the dual camera. The top half consists of 16 LEDs, whereas the lower part overlapping the rear display uses the AMOLED pixels to produce the light. This is supposed to offer prettier selfies as it spreads the light across one's face more evenly. When not in use, this ring also doubles as a notification light.

Needless to say, the camera comes with many dedicated software features, including the usual AI face beautification and face shaping. Interestingly, it can even do body shaping if you're very conscious of yourself. 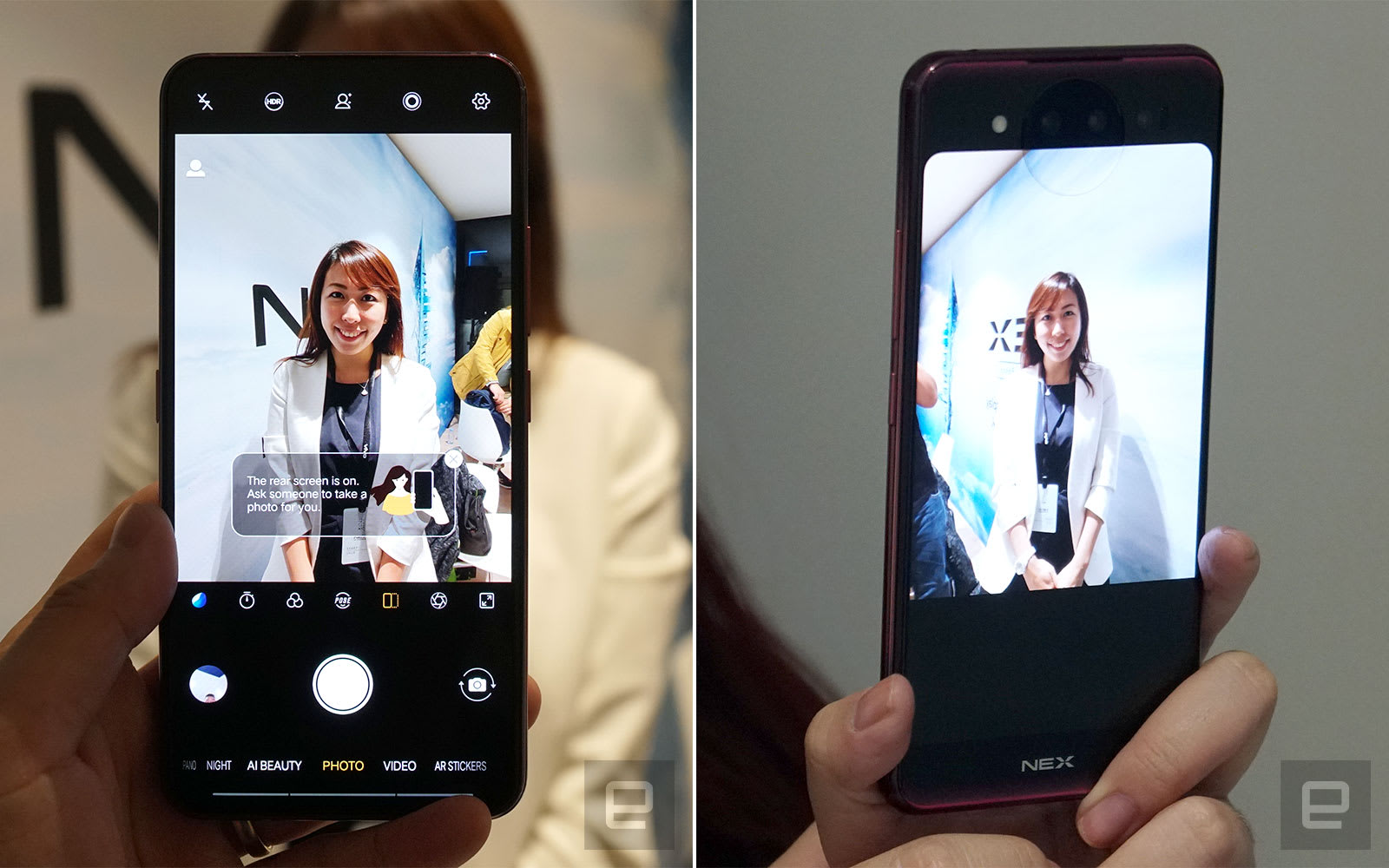 To take full advantage of the secondary screen, there's a Mirror Mode which is self-explanatory: While you're taking photos of a person using this phone, the rear display shows a live view of the subject -- just like a mirror -- which allows him or her to adjust pose where necessary. There's also a Pose Director mode which uses the rear display to show pose suggestions picked from Vivo's image library.

Another unique feature here is the Time Of Flight 3D camera, which is used for faster (0.35 seconds) and more secure (300,000 dots) facial recognition and enhanced facial beautification. It also serves as an AR measuring tool -- much like what Google's Project Tango touted back in the days. 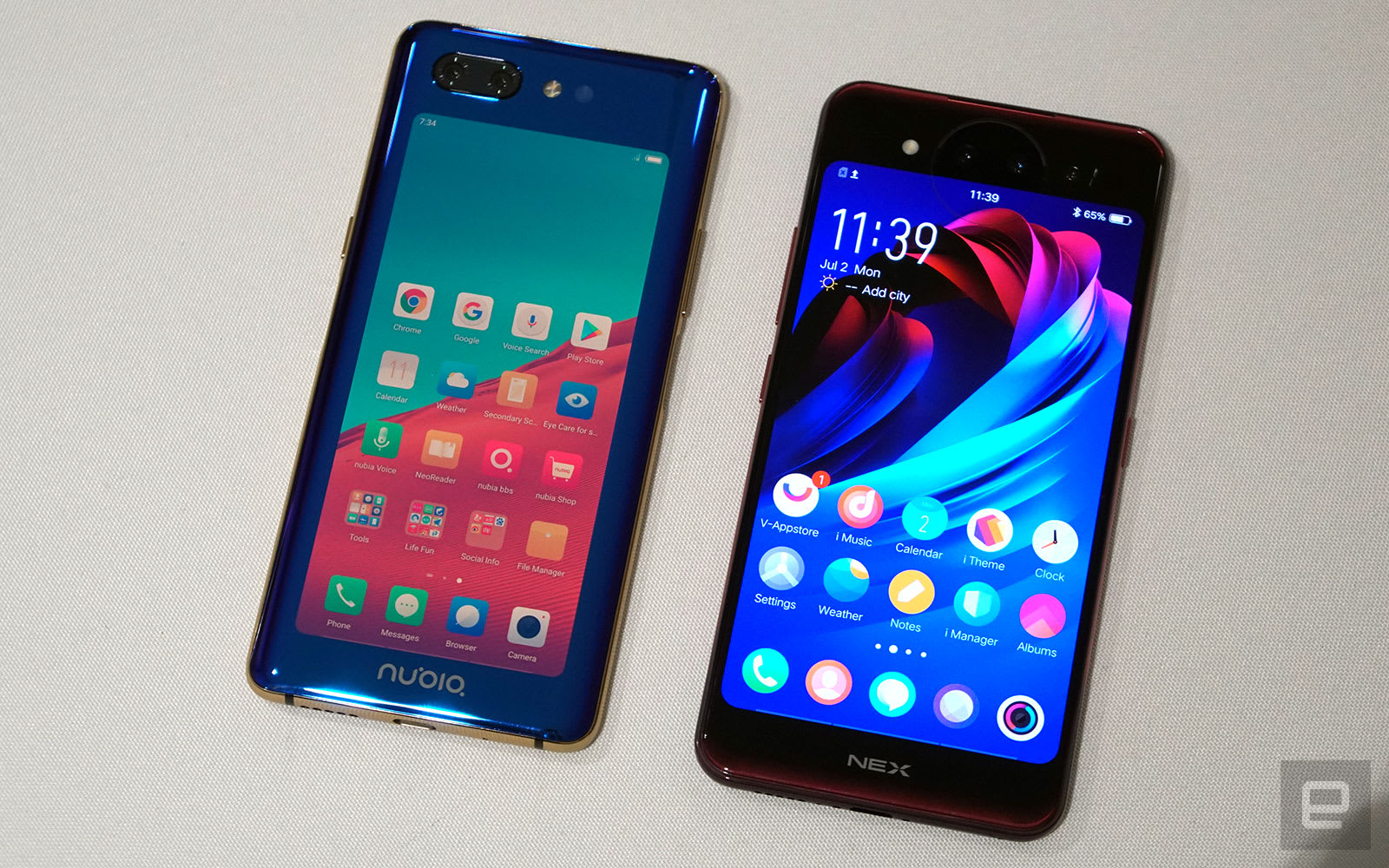 Dual-screen phones: A Nubia X next to a Vivo NEX Dual Display Edition.

The rest of this Android 9.0 phone is very much what you would expect from a standard flagship, but with a whopping 10GB RAM. You get the usual Qualcomm Snapdragon 845 chipset, 128GB internal storage, a 3,500mAh battery (a bummer considering the NEX S had 4,000mAh; not to mention that it's powering both screens simultaneously some times) and, again, an in-display fingerprint reader -- now at its fifth generation which unlocks in 0.29 seconds. Hi-fi enthusiasts may also appreciate the integrated AK4377A 32-bit audio DAC chip from Asahi Kasei Microdevices, but we won't know for sure until we get hold of a unit.

Alas, there's still no NFC. One possible reason is that Vivo is promoting the use case of QR code-based mobile payment -- a common method in China -- using its rear display, meaning you won't have to flip the phone around. In other words, Vivo doesn't think much of NFC-based mobile payment, and it's also saving a bit of manufacturing cost here, too. 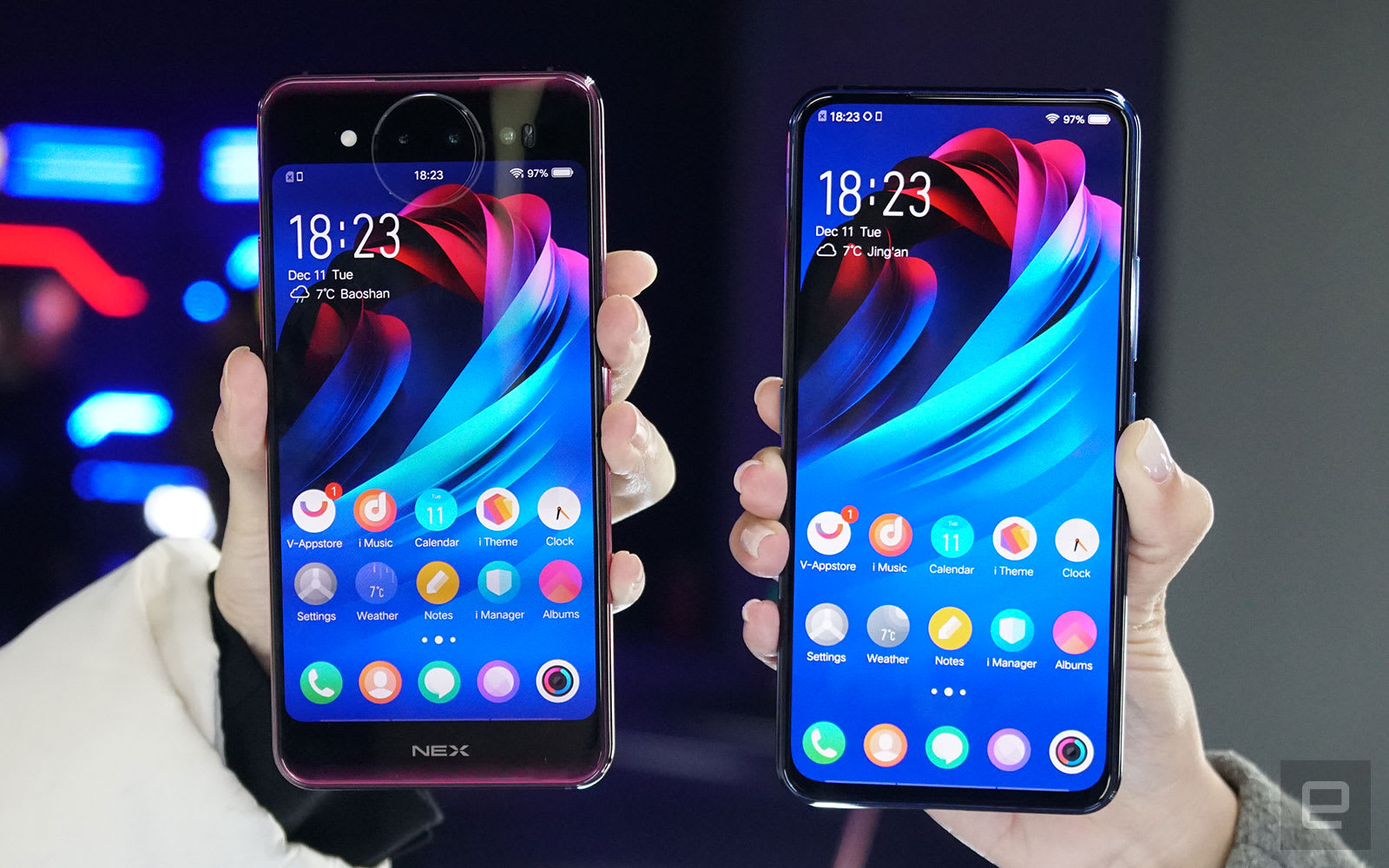 As with most Chinese smartphones, Vivo's NEX Dual Display Edition is also a dual nano SIM device, but it's sadly lacking support for most of the US LTE bands, so phone importers should bear this in mind. As for everyone else, you can grab either a "polar blue" or "nebula purple" unit in China from December 29th for 4,998 yuan (about $725), or wait until the international version (sorry, blue only) hits the markets in Hong Kong, Taiwan and Singapore in the very near future.

In this article: AK4377A, china, dualdisplay, dualscreen, gear, hands-on, mobile, nex, nnexdualdisplayeditionn, smartphone, timeofflight, tof, video, vivo
All products recommended by Engadget are selected by our editorial team, independent of our parent company. Some of our stories include affiliate links. If you buy something through one of these links, we may earn an affiliate commission.