Move over smart assistants, the robots are coming.

At Samsung's press conference, the day before CES officially opened, there was the usual parade of smart home gadgets and appliances. Then right at the end, almost as an aside, the company revealed potentially the most exciting products of the show: Three robots and a line of exoskeletons. Details were sparse, all we knew was that the there was a robot for the home, one for air purifying and another for retail situations. Can you guess which of the Bot Air, Bot Care and Bot Retail (as they are called) does which?

On the show floor, we were able to take a closer look at all three and their exoskeleton cousins (Samsung obviously got the memo). Bot Care was given the most air time at our demo, and this makes sense: It's the nearest thing to a consumer robot butler out of the trio. Bot Care performs many helpful household tasks, but many of them are focused on (as the name suggests) providing care, especially the elderly.

Bot Care is fairly simple, taking the cone-on-wheels approach with a display as a head. That head also contains sensors so that the bot can navigate, but also take your heart rate and blood pressure (if you place a finger on its "face"). Care Bot also likes to watch you sleep. Creepy as that sounds, apparently it listens to you in your slumber and determines the quality of your rest, which it'll read/speak back to you upon waking.

Other care-related features include reminding you to take your medicine (it'll even watch to check you do) and sharing your sleep and vitals history with Samsung Health. For the elderly, Bot Care can link with IoT sensors that detect when you fall, and the robot will come to where you are, connect you with friends and family, or even call 911. It might not be the humanoid robot we were promised, but it's a start.

Bot Air, is basically an air purifier on wheels. Again, if you have air sensors around your house, Bot Air will be alerted when quality drops in a certain location and will scoot over there and filter out all the nasties. 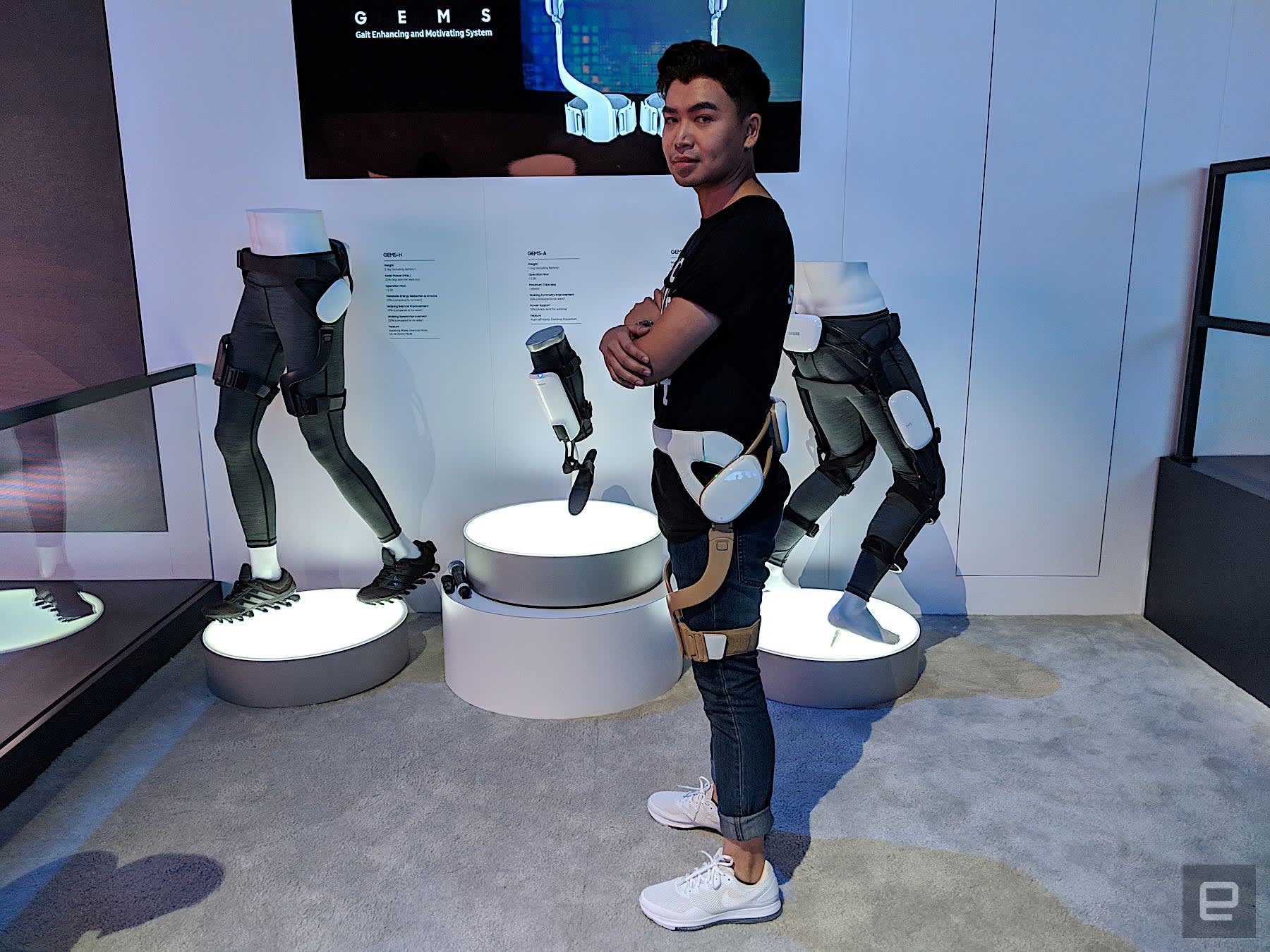 Perhaps the most familiar of the bunch is Bot Retail. If you've ever seen a "robot" at a shopping mall, then you know what to expect here. Bot Retail can dispense directions, show you food and menu items, deliver coffee and small plates of food, and even take payment for them wirelessly via NFC. Samsung also demoed the robot "recognizing" someone's watch and offering up suggestions for accessories you could buy -- in this case, alternative straps for the wearer's Galaxy watch (of course).

This is a new space for Samsung, so while the above all seem functional, I can imagine that we'll start seeing more interesting and advanced versions in a year or two. What was more intriguing, to me, were the exoskeletons (yes, plural).

The Gait Enhancing Motivational System (yes, really), or GEMS for short is a line of wearables to assist various body parts (the knee, ankle and hips, specifically). In the future, you might be ditching your old knee sock, and donning one of these, instead.

The daddy of the bunch, GEMS-H is perhaps the most interesting. What looks like a pair of techno-lederhosen promises to assist your walking (up to a saving of 23 percent in energy), correct your posture, and even increase your walking pace by almost 20 percent.

I tried the GEMS-H, and it's definitely kinda fun. At 2.1 kg, it's not uncomfortable or a burden to wear. In power assist mode, you can definitely feel your upper thighs being propelled forward as you walk. For me, it was fun, but it's easy to see how this may be a real benefit for someone with actual mobility issues. The GEMS-H will also help you up the stairs, and provide stability and resistance as you come back down. Samsung claims you can add resistance for some sort of workout too, but this is probably better for injury rehabilitation than an actual fitness workout.

Even though Samsung basically makes one of everything at this point, its move into robotics and mobility is interesting. Home robots are going to become the natural evolution of smart assistance in our living space, so it makes sense the company would want to move in on that. As for the exoskeletons, my biggest fear is that they'll either never see the light of day, or if they do, they might be a little on the pricey side. All that to say, for as fun as this demo was, the company couldn't confirm when or even if the products would come to market — much less at what price.

We all love robots, though, right? Especially ones that bring you cake.