In the cab with Daimler’s level 2 semi-truck

When Daimler announced that its Freightliner new Cascadia would be the first class 8 truck to get level 2 driver's assistance (adaptive cruise control and lane keep assist), I was confused. It seemed insane that the vehicles that deliver our goods didn't have the same technology found in many new passenger cars. After riding in the cab of one of the new trucks, it's apparent that this technology is long overdue and sure to help drivers.

During my ride, the Freightliner's adaptive cruise control tracked the vehicle ahead of as it sped up, slowed down and stopped. The system works like the feature found in passenger cars, the driver sets a speed and the new Cascadia will drive at that setting until a slower vehicle gets in front of it. At that point, it'll slow down and follow that vehicle at a safe distance.

The giant diesel engine growled as it downshifted after an SUV stopped in front of it. After about a second the SUV proceeded and the new Cascadia lurched a bit and followed. Daimler says the system will re-follow traffic after its come to a stop for two or less seconds. After that, the driver will have to tap the accelerator or use the resume button on the steering wheel.

Lane-keep assist was also demoed and worked as it does in a car. The driver then went a bit further and showed off the truck's Lane Departure Protection. When the new Cascadia veers outside of a lane the system steers the truck back. It was impressive. 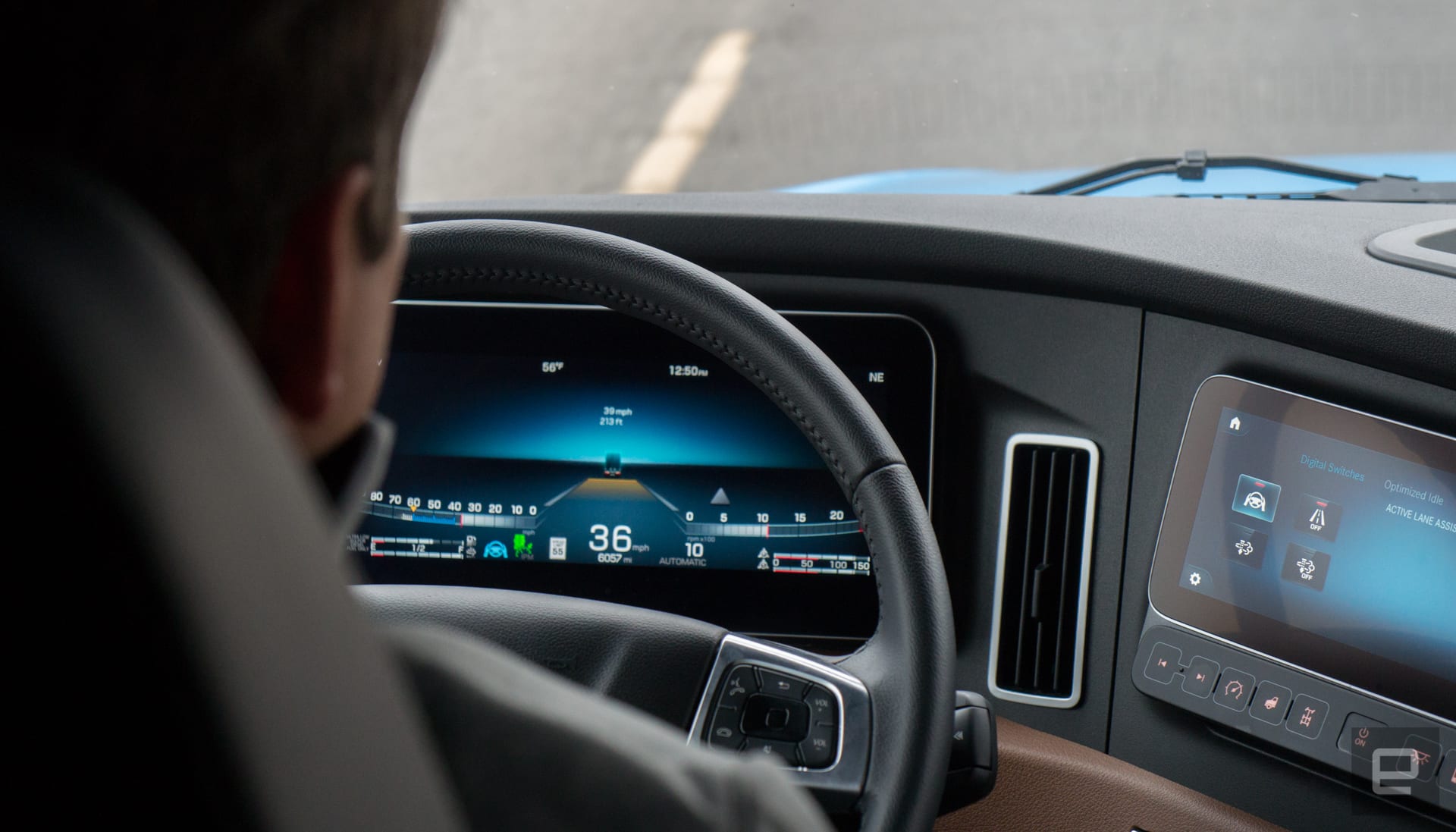 On a closed track, Daimler also demoed Side Guard Assist. It works like blind spot recognition but is a bit more robust. The two radar sensors on the right-hand side of the truck keep a virtual eye on the entire length of the vehicle including a single trailer. It recognized vehicles, bicyclists and pedestrians. The passenger-side of a semi is a giant blind spot for truckers, adding this feature gives them a better sense of what's happening.

Finally, I had the opportunity to sit in a truck as it sped towards an inflatable vehicle to test the Active Brake Assist. The system engaged the brakes as expected and Daimler said that it would do the same thing with a moving pedestrian. Sadly, we did not have any inflatable people to try out the system.

After exiting the new Cascadia, I thought about the long hours truck drivers put in every day. It's a rigorous job that involves dealing with other drivers and traffic. These systems reduce the stress level in passenger cars, in a class 8 truck like the Freightliner they should be a welcome addition. Most of us will never drive a big rig with level 2 driver's assistance, but we should be happy they're coming because it means safer roads for all of us.