When you’re the only company at CES from your country

Checking out the tech offerings from Jamaica to Armenia.

There are more than 1,700 American companies at CES, 1,200 official exhibitors from China, and several hundred from France and South Korea. Many of them are veterans of the trade show circuit, one-upping each other's booths with elaborate curved OLED TV installations and Disney-fied cart rides. There are entire government-sponsored showcases to feature the best of their country's tech scene.

Then there are first-timers like Ekid Studio, a Vietnamese company that makes educational flashcards with augmented reality functions for kids, for whom CES was the start of a monthlong US trip to seek investors. There is Flyser from Belarus, the startup behind an exercise frame that coordinates with VR experiences to give the impression of flying or swimming. The company came to CES after seeing last year's success of Black Box VR.

It costs only $1,000 for a standard booth in CES' startup section, though that ignores the multi-leg flights to a country they may have never visited, preparing their public information as well as room and board costs. For these companies, what's it like to be one of the only representatives of your country? How do you stand out among the thousands of other exhibitors in Las Vegas? What do you even get for your money and effort? 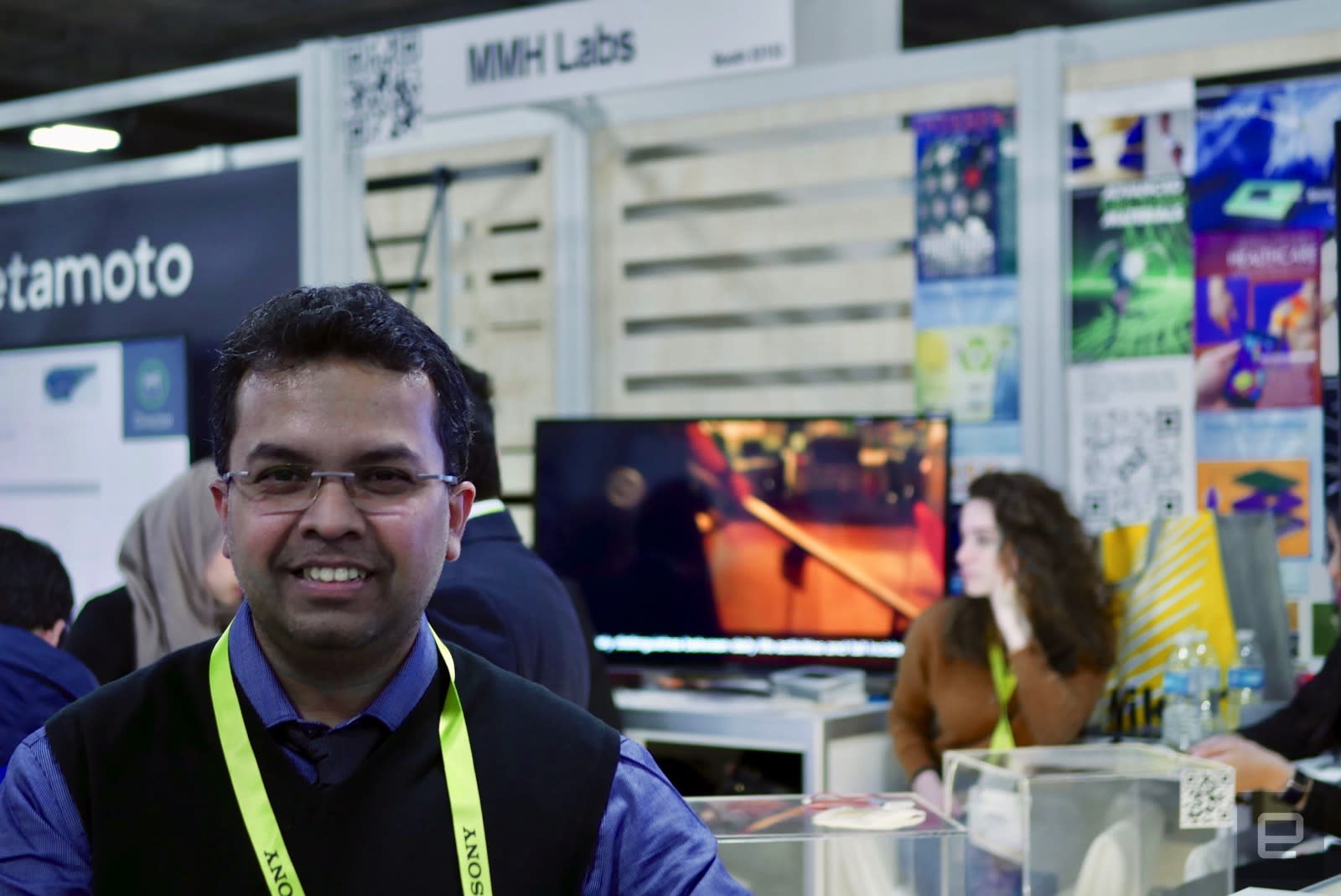 "You won't find it anywhere, I can challenge, in the whole of CES," Muhammad Hussain tells me. He's a professor of electrical engineering at King Abdullah University of Science and Technology, which was the first mixed-gender university in Saudi Arabia. He's also "principal innovator" at MMH Lab, an experimental hardware unit within the university, which is here to showcase its prototypes.

Hussain is showing off Bluefin, which is basically a wafer-thin, 2.4 gram, sub-$20 wearable that sticks to fish and can measure water pressure, depth and pH levels in parts of the ocean humans can't reach. The ethos of his lab is to create devices with (literally) flexible and nature-inspired form factors that are easy to understand and, in his words, "democratized."

"If you look at even CES, most of the technologies are very much focused on the people who can afford it right now. But the reality is most people in the world, they cannot afford it," he said.

Along with several current and former grad students, he's trying to meet potential commercial partners and get immediate feedback on early-stage products.

"If you go to movies versus if you go to Broadway, Broadway is where the audience provides you feedback right away," he said. "These kinds of conferences, or CES, they provide us with that opportunity to have direct feedback [on] how people are perceiving what we're doing."

Indeed, I had yet to see a wearable for fish at this year's trade show. "Next year," Hussain said. "We're bringing wearables for plants." 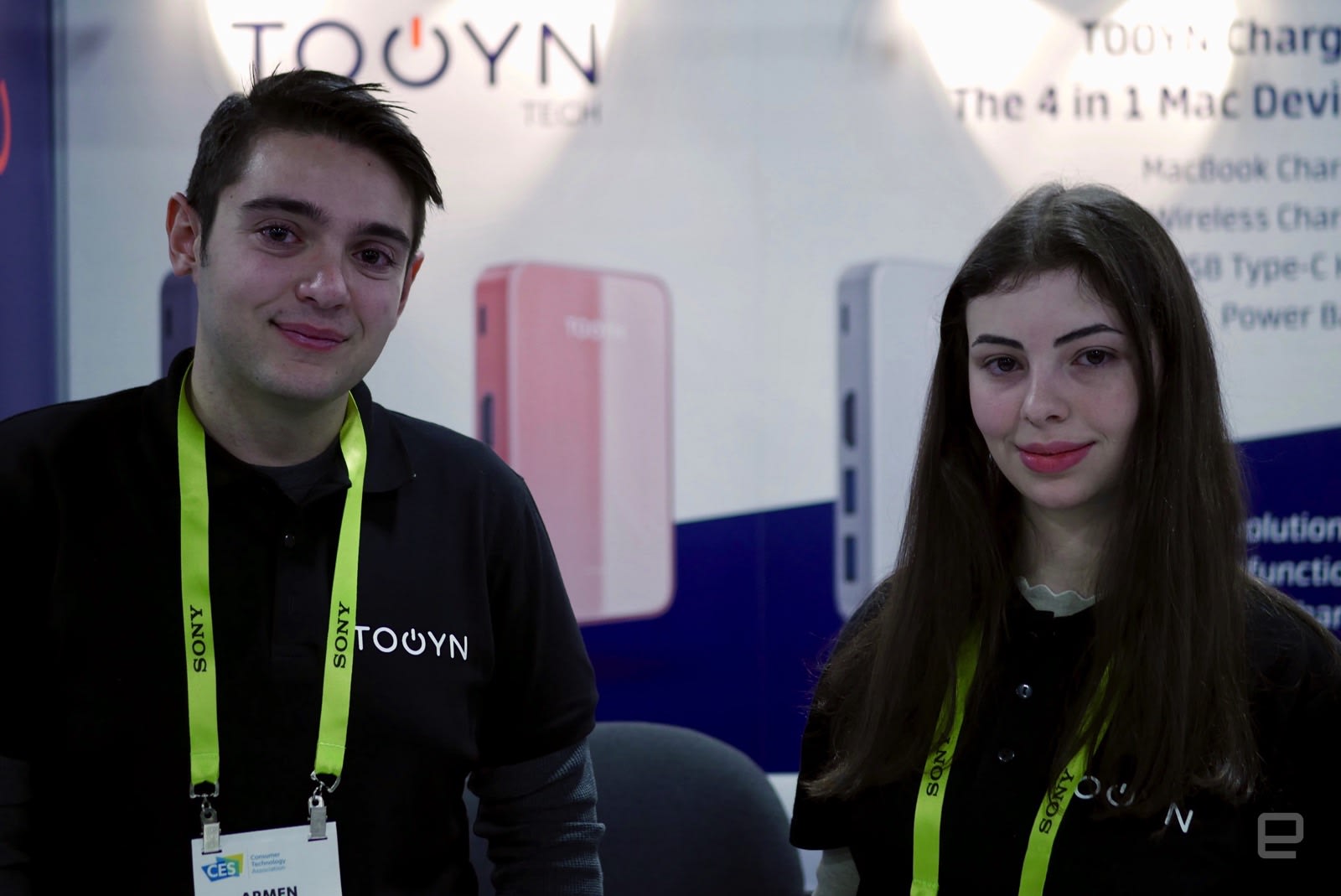 Tooyn is not the only company from Armenia with US offices at CES, says representative Armen Mardirossian, but they're the only ones who registered under their home country's name. "We're proud Armenians," he said.

He and another spokesperson Lilit Grigoryan travelled from the capital Yerevan to test the reception for their product: an all-in-one Macbook charger that also has ports for USB, HDMI, SD cards and includes a wireless charger. They plan to start crowdfunding on Indiegogo this spring.

"Actually, Amazon came and they wanted to sell it on their marketplace so we got really excited, that was the start of our day today," Mardirossian said.

His grandparents are from Armenia but he was born and raised in LA, part of an Armenian diaspora that is larger than the country of three million. As a 24 year-old, he visited Armenia for an internship, then ended up staying to work in the tech sector.

The country is nestled between local powers like Russia and Iran. "Kind of weird neighbors to be around you know?" Mardirossian said. "The tech industry's booming because it's landlocked, it's hard to get our products out, so our minds make the products."

Still, his route to working in Armenia is seen by natives as an unusual path, according to Mardirossian.

"They assume I'm a tourist cause it's shocking to them people wanting to repatriate," he said. The 20th century saw Armenia suffer through the genocide, collapse of the Soviet Union and Spitak earthquake. "A lot of people are shocked people are returning now". 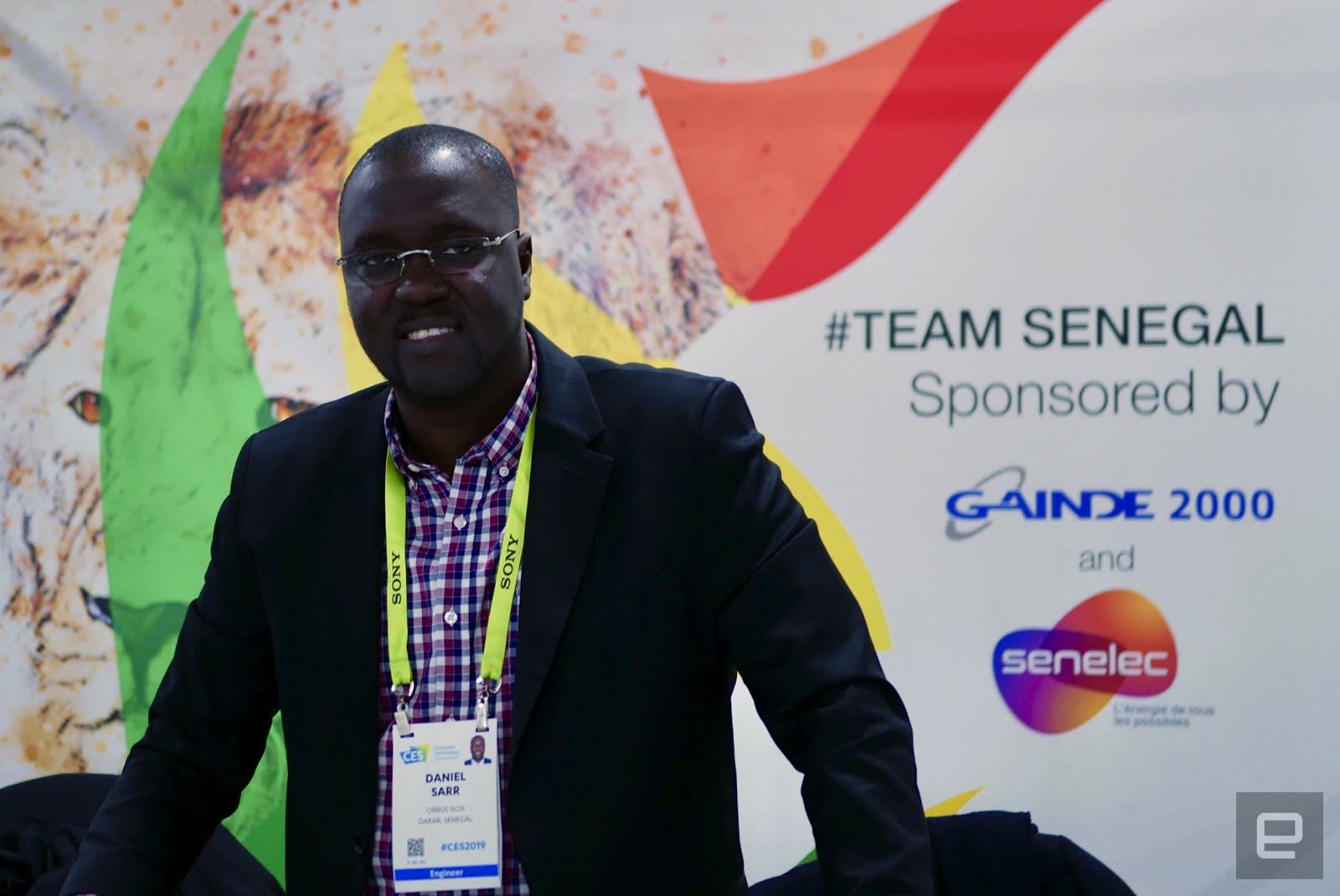 Daniel Sarr travelled the 6,000 miles from Dakar, Senegal to Las Vegas, Nevada to meet other Africans.

He's here representing Orbus Pay, which allows businesses to process payments from cash, smartphones and bank cards all in one platform. In Senegal, he explains, only a minority of people use cards, while the majority use their phones and cash, essentially skipping one Western stage of payment method. Orbus Pay wants to sell its API to other African businesses who face similar issues, like those from Kenya, Ivory Coast and Nigeria.

"It's kind of strange but [you can] be more known by African people, if you come to showcase at CES with the press release and all this buzz," said Sarr, partnership and promotions director at Gainde 2000, the parent company of Orbus Pay.

As an African tech company, "one of our most important challenges is credibility," Sarr said. "In the tech business, it's easier to use Japanese technology or technology from Europe or the US."

At an austere booth -- no adornments, just a small stack of business cards -- Sarr says that they're also trying to meet global investors and show that innovation is taking place in Africa generally. There was in fact another Senegalese booth next to Sarr's, but it was empty as the owner had gone to roam the floor. 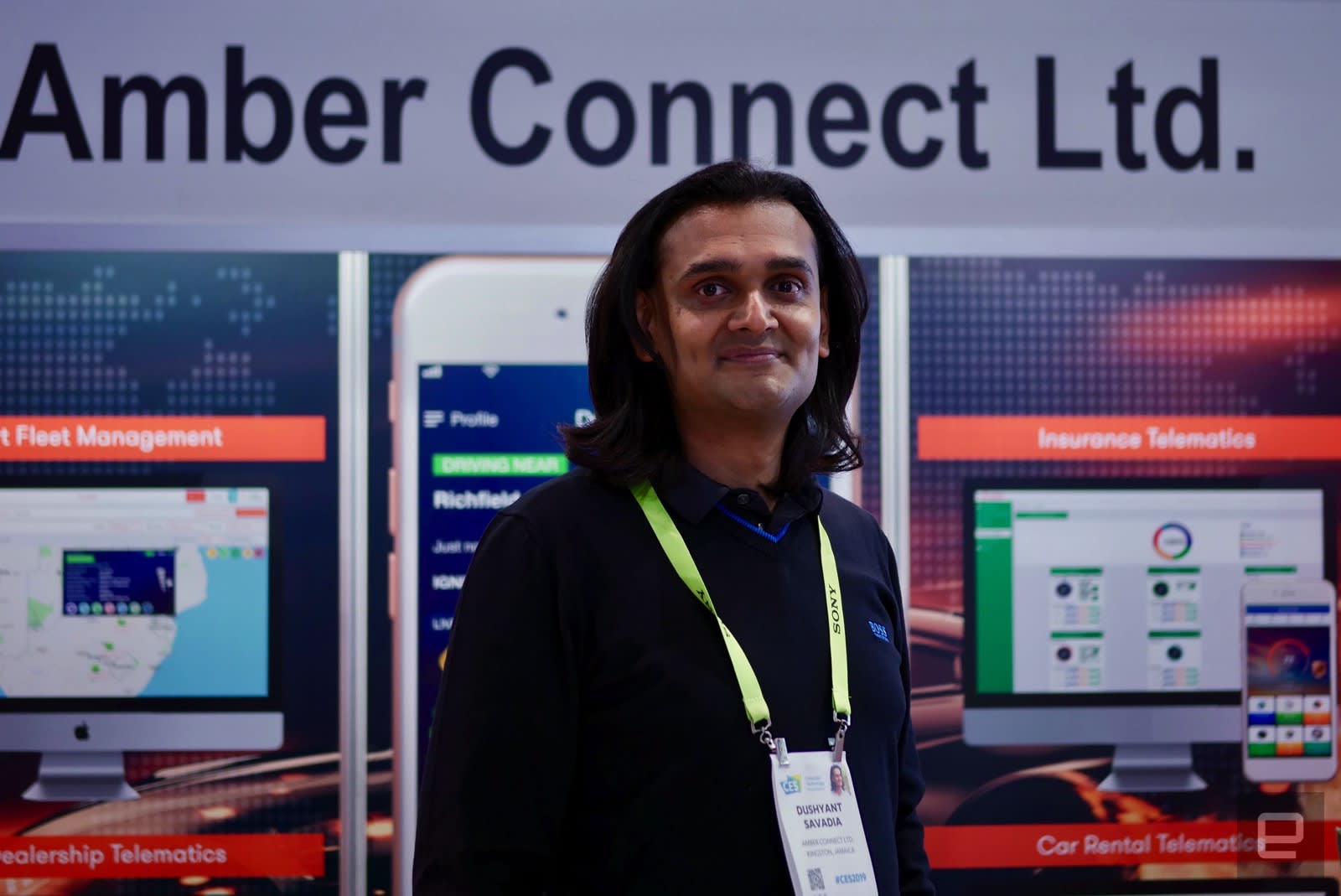 Amber Connect is not just the only Jamaican company at CES, it's the only one from the entire Caribbean. It may also be one of the few whose profits go primarily to a guru.

Having first shown at the show's Eureka Park startup section in 2016, this is now the vehicle technology company's third CES and it's graduated to the main floor. For founder and CEO Dushyant Savadia, CES is something like an auto show -- he's here to meet car manufacturers, parts distributors and dealerships.

Based in Jamaica, Savadia has to travel a lot to get the word out about his company. "If we were based out of the US, perhaps I could have done way more in half the time. But coming out of Jamaica we have to make tremendous amounts of effort to showcase what we've got across the globe by going there ourselves, and of course platforms like CES bring the world to one place."

He wants to make Jamaica the center of gravity for the Caribbean's tech scene, he says. "My vision always has been, why does everybody have to go to Silicon Valley and make one country or one location the hub of tech for all over the world? My vision is that every country that we operate into, we make Silicon Valleys out there ourselves."

If Savadia is full of optimism, his background might go some way to explaining it. Born in India, he's been affiliated with the Art of Living Foundation -- the non-profit organization led by spiritual guru Ravi Shankar -- for nearly two decades. Formerly an alcoholic, Savadia says, the organization "changed his life" after his boss at Xerox mandated the workshop for all employees.

Savadia holds all the shares in Amber Group, the umbrella company owning Amber Connect as well as Amber Fuels (a gas payment platform), Kuya Technologies (a software and data analytics firm) and Amber Pay (a QR code-based payment system). He sends about 80 percent of the group's profits to the Art of Living Foundation.

With his flowing hair, the CEO strikes an unusual figure among the glitz and gambling of Vegas. When I point this out, he says diplomatically: "I think people find different ways to get some happiness."