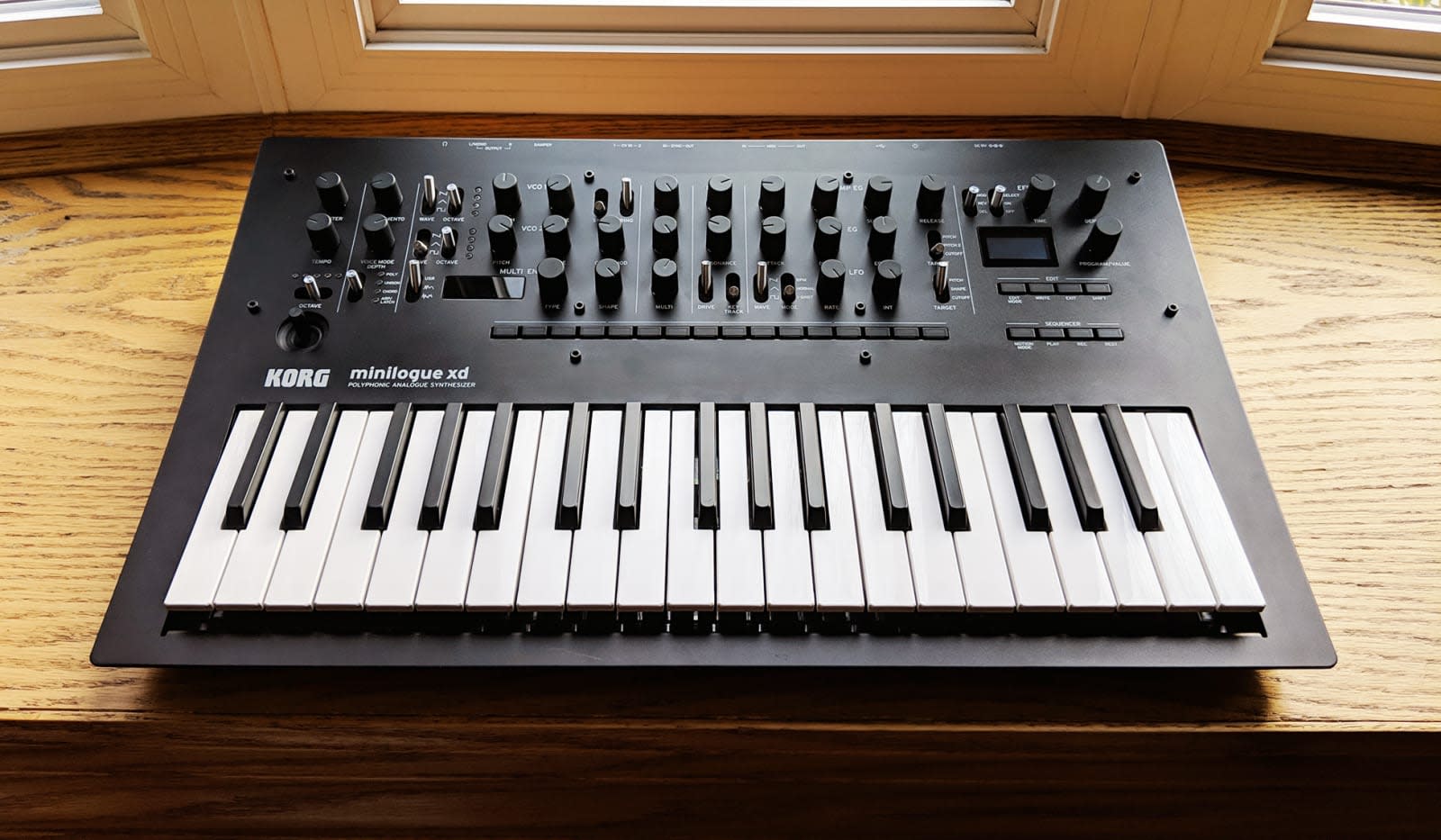 Can Korg improve on the best bang-for-your-buck analog synth?

When Korg introduced the Minilogue in 2016 it was a game-changer. It's a true analog polyphonic synth for around $500, and frankly, there isn't much else like it on the market. And even three years later it's still one of the best values out there in analog synthesizers.

But the market is moving fast, and Korg isn't about to let the competition lap it. So it's introducing the four-voice Minilogue XD, which takes the best parts of the entire 'logue lineup -- Microtunings and the sequencer from the Monologue, the MULTIdigital Oscillator from the flagship Prologue -- and combines them in one stunningly affordable package. 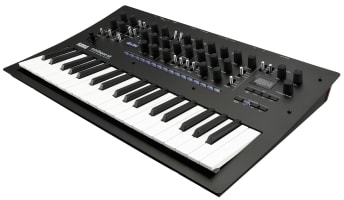 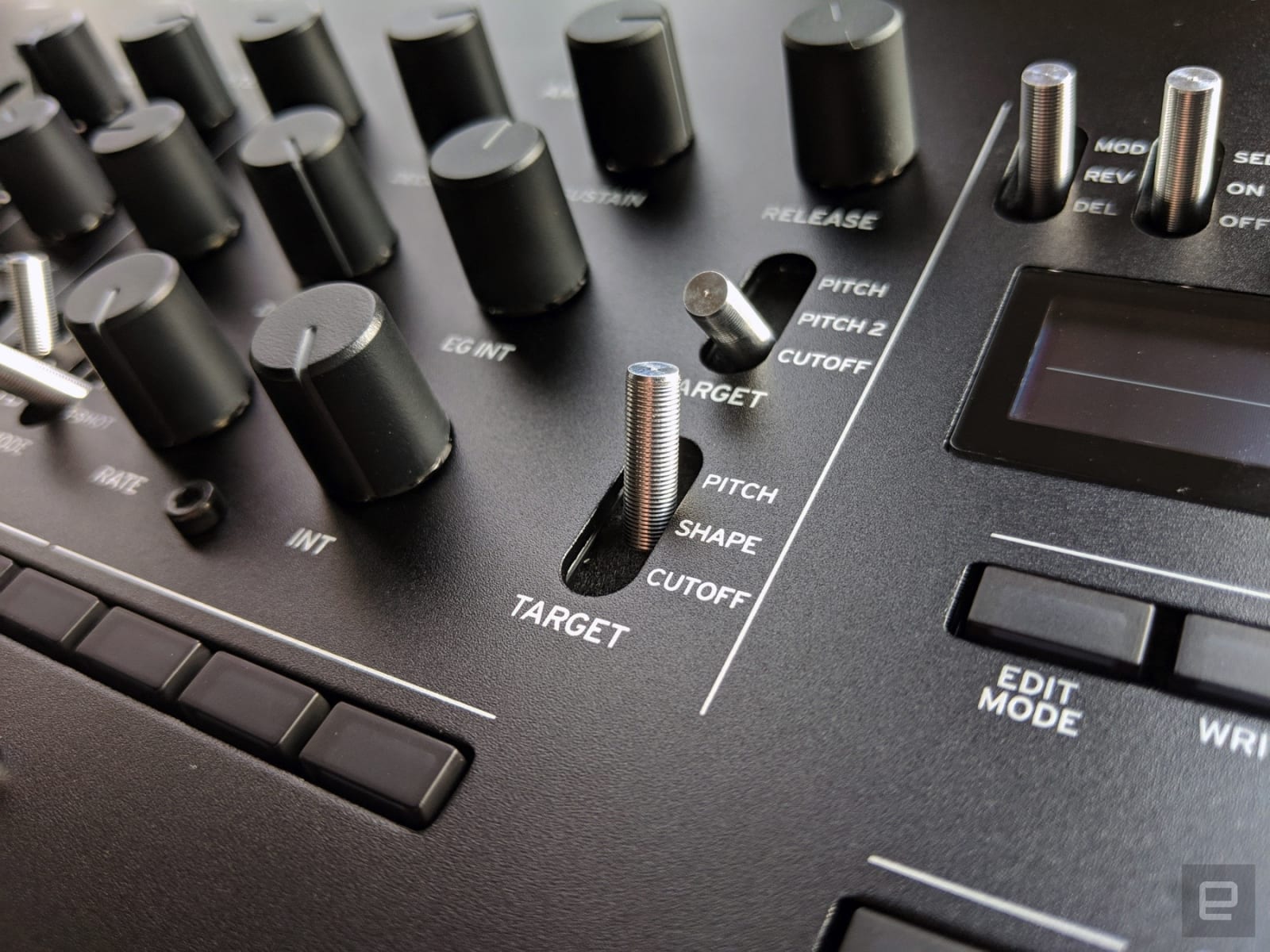 The $650 XD looks very similar to the original Minilogue. It has the same metal front plate, wooden back, minimal black knobs and lightly textured switches as the rest of the line. It's a design that's quickly becoming iconic. And it doesn't just look great, it feels great too. The knobs and switches are solid and satisfying and feel like they were harvested from the sort of tank-like synths companies built in the '70s.

That said, the whole unit doesn't have the same heft. It definitely feels like it can sustain a few bumps and bruises -- it even survived a few weeks in a house with a one-and-half-year-old. But, it's surprisingly light and I wouldn't exactly rush to drop-test it.

It also has the same slim minikeys as the original Minilogue. They're better and longer than those on many budget synths and portable midi controllers, but they might pose a bit of an issue if you have sausage fingers.

Thankfully Korg ditched the weird pitch slider from the Monologue and Minilogue. It's not quite as forgiving as proper pitch and mod wheels, but the joystick still represents a huge improvement. And it's easy enough to reassign the Y-Axis to anything from cutoff to LFO rate. 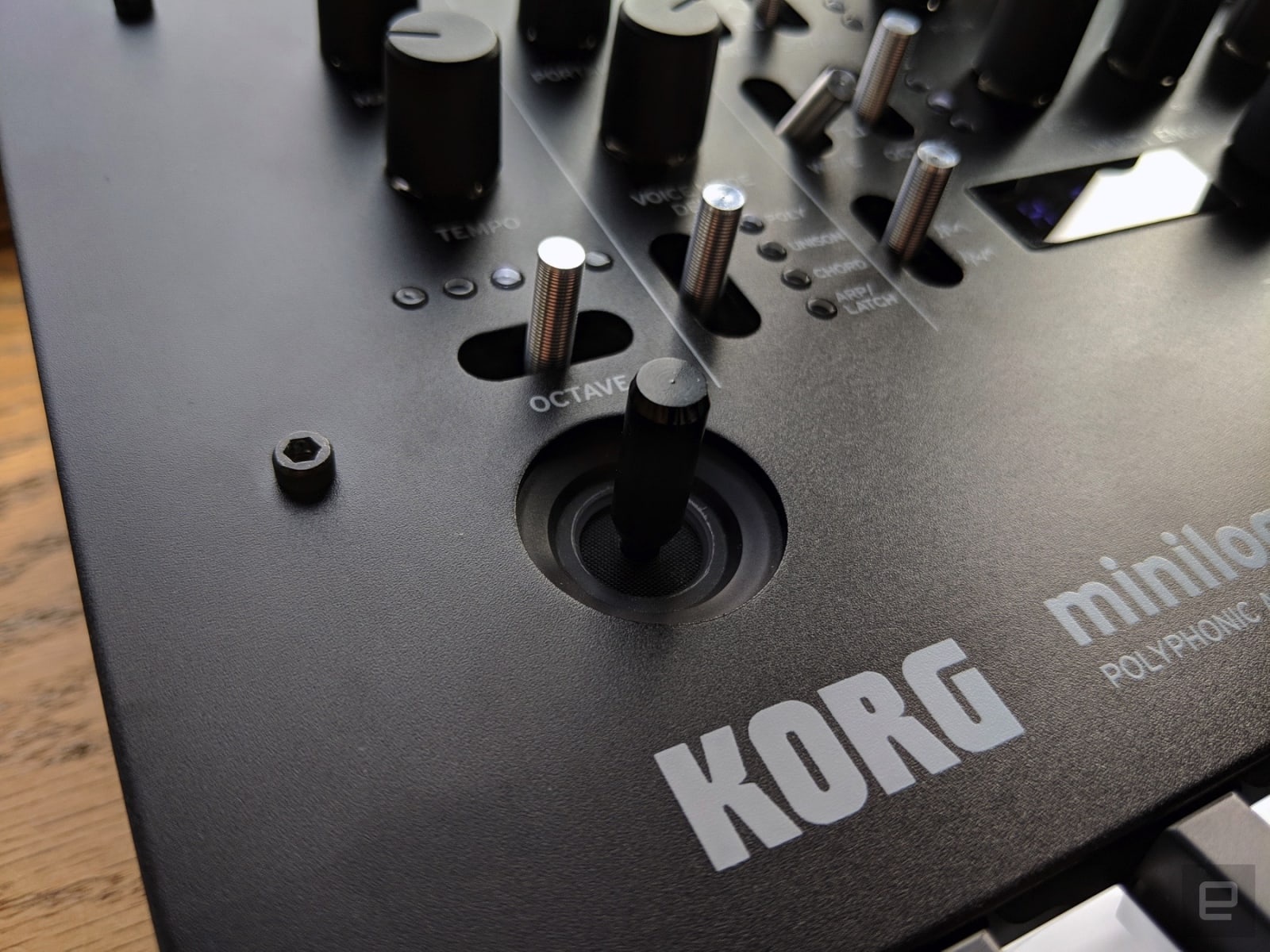 On the back are basically all the ports you expect on a synth in this price range. There's USB for using it as a controller with your computer and for loading patches via the sound librarian. It has MIDI in and out, but no MIDI thru, which puts some limits on how it will fit into a crowded home studio setup. There's also analog sync in and out, for hooking up Volcas, Pocket Operators, and the like. Plus, a headphone jack, stereo line out, a plug for a damper pedal and two Control Voltage (CV) in jacks. Those CV jacks are an obvious nod to the growing popularity of modular synthesis. They don't turn the Minilogue into a semi-modular like Moog's Grandmother -- you can't actual rewire the signal path -- but, you can connect external modules and use them to manipulate things like cutoff or decay time.

One of the most unique features of the 'logue series is the display. Not that it has one necessarily, but how it's used. It's a small OLED used for navigating menus and displaying parameter values. Thankfully most of the important features have physical controls, so there's no need to do a ton of menu diving. Which means most of the time the screen just functions as an oscilloscope. This lets you actually see the way all the knobs and switches are changing the sound. If you're new to synthesizers, it's actually a pretty great teaching aide and gives you a visual representation of abstract concepts like wave shape and resonance.

Display functioning as an oscilloscope.

The heart of any synth is, of course, the oscillators, and the Minilogue XD doesn't disappoint -- whether you're looking for P-Funk-esque synth leads or Aphex Twin-like glitchy bass. But its real strength is in thick, atmospheric pads. It can produce pretty solid key sounds too, but if you're used to playing piano you'll quickly bump up against the limits of its four-note polyphony.

There are two lush analog oscillators here with three wave shapes: sawtooth, triangle and square, with a shape knob for each and tons of options for combining and voicing them. There's pitch for detuning the two oscillators, a cross-mod knob, sync and ring mod switches, plus your standard mixer options.

Once you've got a basic sound you like, you can put the keyboard in poly mode for big pads or unison if you want some thick bass. Chord mode plays a full chord for every key press, which you can change by turning a knob. And the arpeggiator has 13 different modes, including random and manual, but no true programmability.

Of course, if you want to punch in specific notes yourself there's a 16-step sequencer built in. With that, you can dial in a riff and then tweak the sound to your heart's content. You can either play into the sequencer live or do it step by step before hitting play. Unfortunately, unlike the Monologue, you can't punch in a sequence and then use the keyboard to transpose it using the key trg / hold function.

A short song put together exclusively with sounds from the Korg Minilogue XD.

This is more or less the same as you find on the OG Minilogue. But there's also a third, digital oscillator stolen straight from the far more expensive Prologue. The MULTIdigital oscillator has three different modes. It can be a noise generator that lends a subtle crackly vintage feel to pads or be used on its own to make surprisingly snappy snare sounds among other things. Then there's VPM or Variable Phase Modulation, which is Korg's take on FM synthesis — perfect for getting those cold metallic tones that just scream '80s.

And lastly there's a bank of user waves ... and this is where things can get really interesting. If you've got a little bit of coding knowledge you can create your own waveforms for the Minilogue XD using an SDK. Plenty have already done this for the Prologue, but Korg wouldn't confirm if the user-created waves would be compatible across synths. I can say that I tried to load a custom waveform created for the Prologue on to the XD and it refused to take, but I'm still using the beta version of Sound Librarian and a preproduction version of the firmware. So things may change. 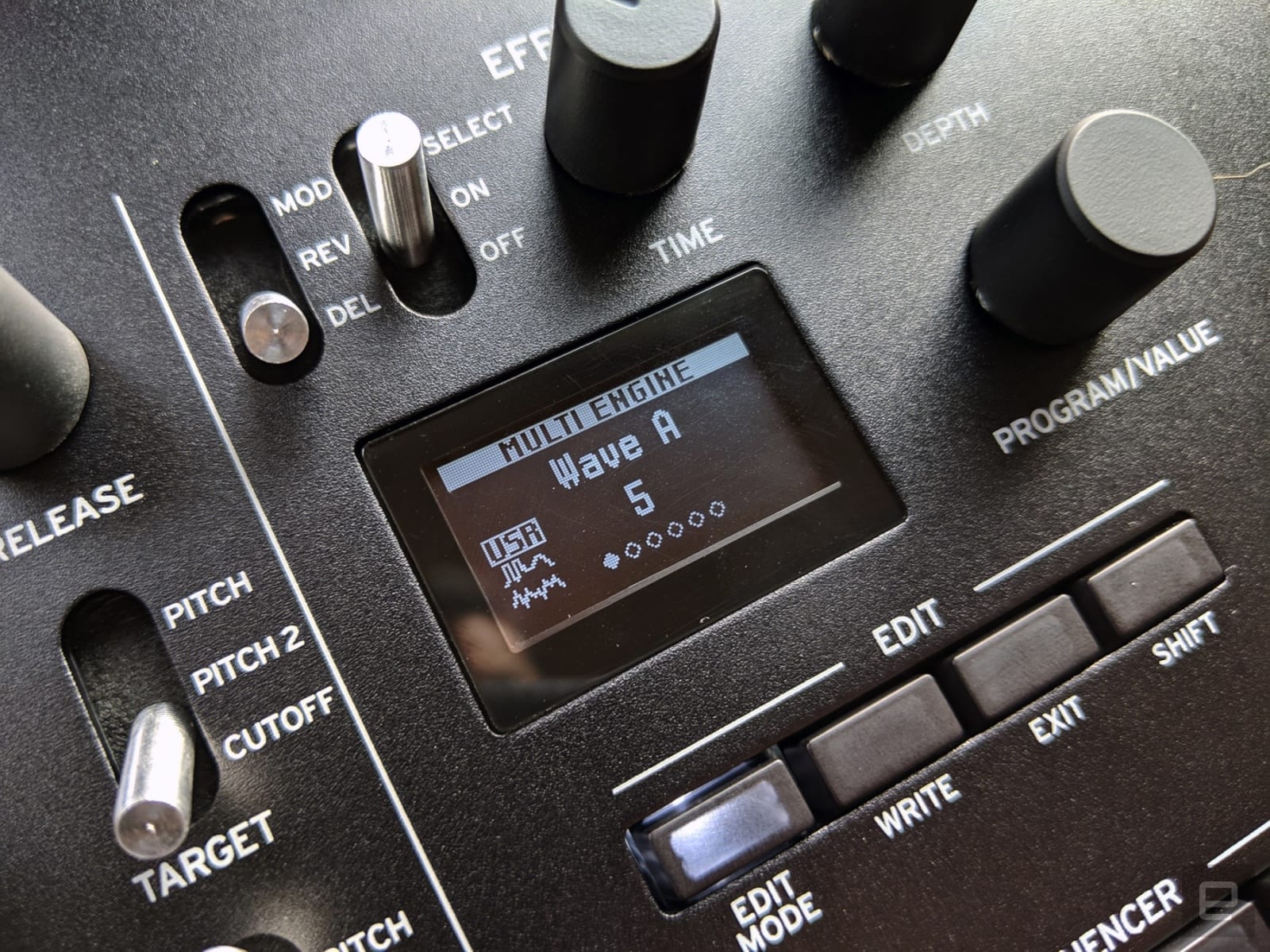 What the user waves really represent, though, is a way to customize the sound of your Minilogue beyond presets. There's already a small ecosystem of third-party developers and sound designers building and selling custom oscillators for the Prologue so it's safe to assume they'll make their way over to the more affordable XD, which will likely have a larger user base.

Things return to more traditional synth territory as you go along the signal chain. The filter on the XD is completely new but voiced to sound similar to the two-pole version on the Prologue. One of the complaints about the original Minilogue was that the filter really caused the low end to drop out as the resonance was turned up. So it's nice to see Korg listening to its customers. It's not quite as aggressive as the one on the Monologue, but you can still get some decent growls and squelches out of it.

There are also switches for drive and key tracking. The former adds distortion, while the other opens up the filter cutoff more the higher the note you're playing. But these switches only have three positions: off, 50 percent and 100 percent. That limits the amount of subtlety you can dial in here.

A collection of preset sounds and demo sequences from the Minilogue XD.

Then you've got your standard attack, decay, sustain and release controls for dialing in everything from slowly evolving pads to plucky bass hits. And an LFO for adding some movement to your sounds. One thing I'm supergrateful for here is the option to sync the LFO to the BPM, which means no more fussing over fractions of a millimeter to get that pulsing rhythm just right.

If you're willing to do a little menu diving you can squeeze a little more versatility out of that LFO. You can set it to apply to all the oscillators, only the analog ones, just analog two, or just the digital oscillator. That allows you to create complex evolving sounds, for instance you could have slightly warbly analog pad backed up by a smooth and clear digital sine wave.

With so many moving parts, it's a good thing that Korg has included plenty of room for storing patches -- 500 of them, to be exact. About 150 are prepopulated with sounds from Korg. There's even some pretty impressive patterns that coax drums and melodies simultaneously out of the sequencer. 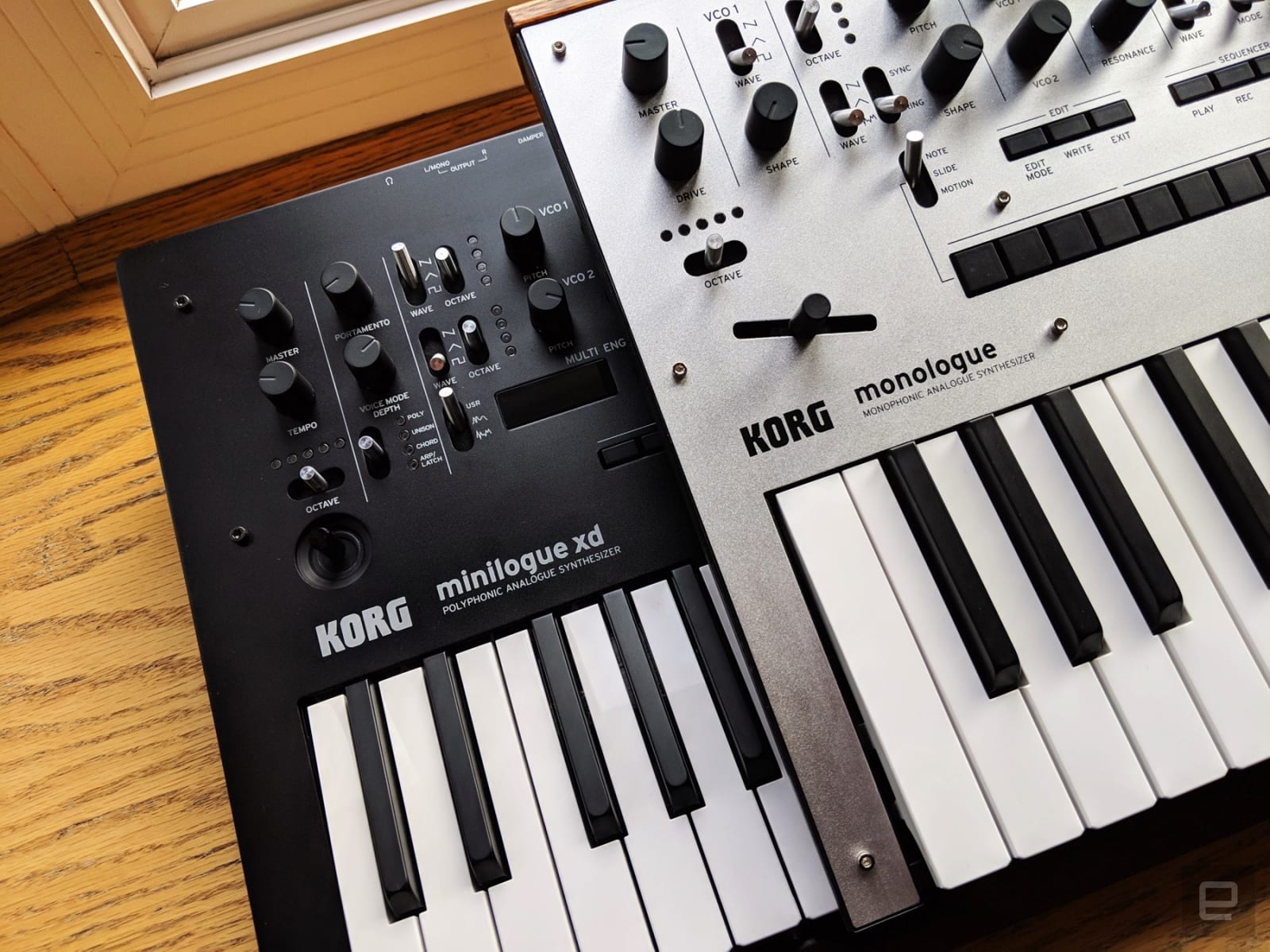 If you're looking for a polyphonic analog synth in this price range with a keyboard, you basically have only two other options. The original Minilogue and Behringer's DeepMind 6. The original Minilogue is still a very capable analog synth that's especially good at producing lush pads. And at $529 it continues to be a hell of a bargain -- especially if you're not interested in the digital capabilities of the XD. The DeepMind 6 can produce six notes simultaneously and has a much more flexible LFO. Plus, it's a hundred dollars cheaper at $550. But, reviews have been mixed and some customers have complained about noisy cooling fans and subpar build quality.

If you're okay going with a digital synth, consider Roland's $500 System-1. It's a small, four-note polyphonic synth built around the same sound engine as the System-8. That gives it plenty of room for expansion and flexibility. There's also Novation's $440 MiniNova: It sounds decidedly digital and requires some menu diving. But it's a great value if your style is more Skrillex than S U R V I V E. 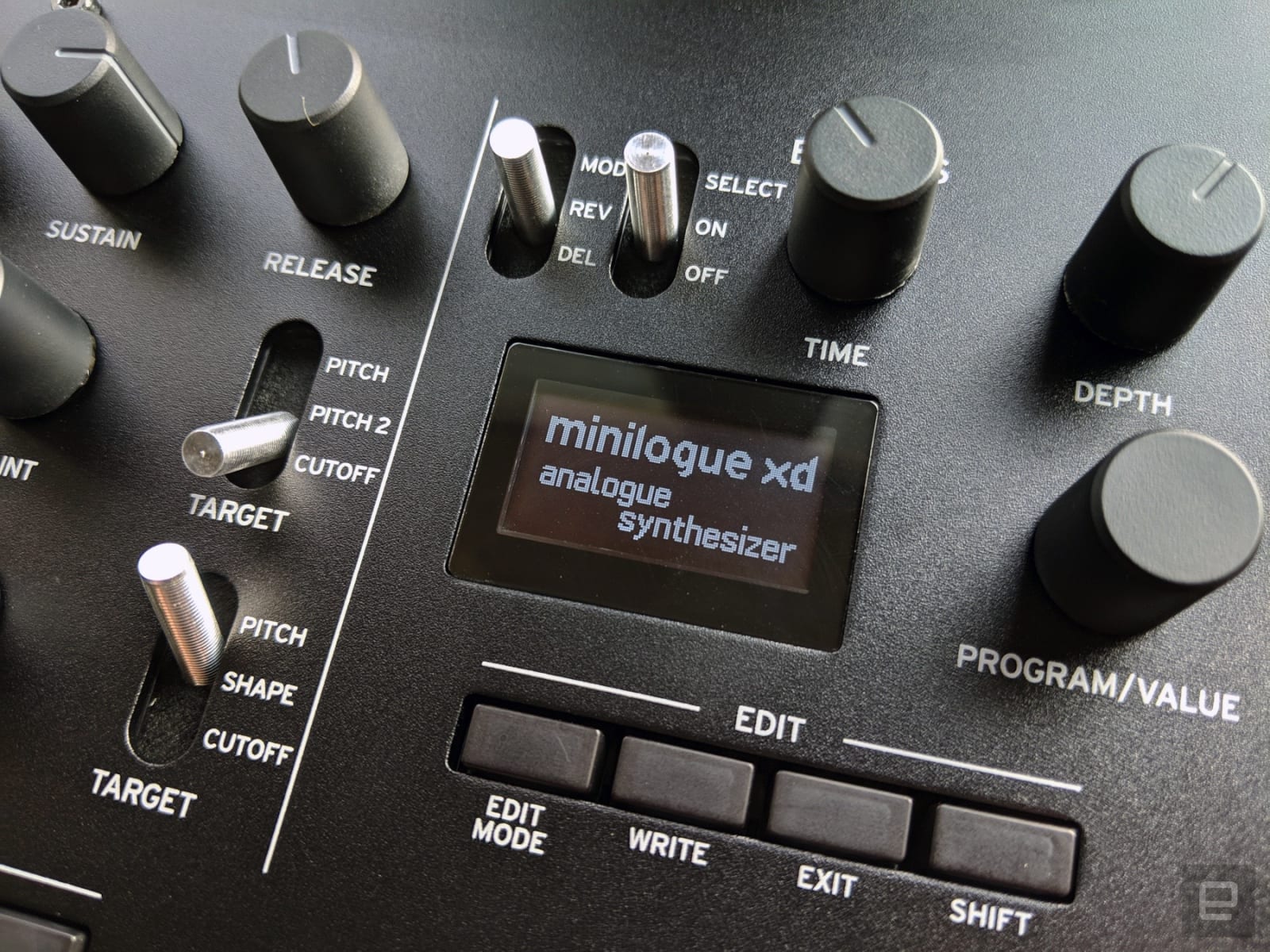 Honestly, though, the Minilogue XD's combination of warm analog tones, digital waveforms and built-in effects makes it one of, if not the most versatile midrange synths out there. And the user waveforms have nearly bottomless potential. I haven't had it for very long and have mostly been playing with the presets. But the sheer range of tones you can achieve is stunning. With the 'logue and Volca lines, Korg has struck an incredible sweet spot between cost and capabilities. Just as impressive, it doesn't cut corners on build quality, either. This is something many of its competitors simply haven't figured out yet. And when it comes to balancing price and performance in an analog synth, Korg is still the company to beat.