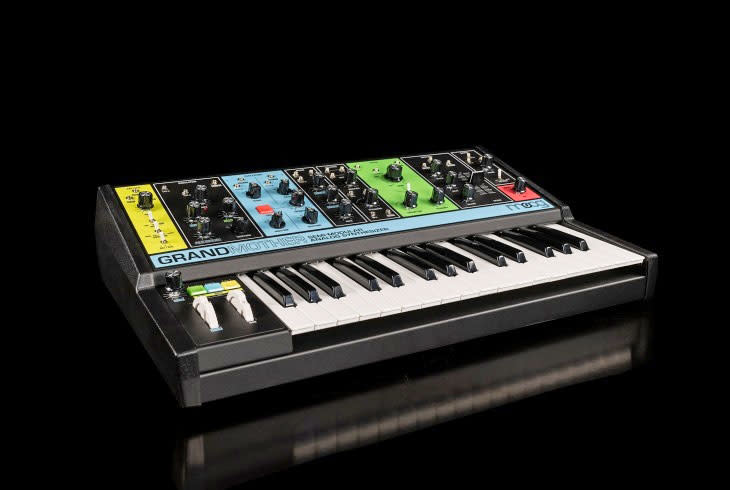 Moog continues to move forward with its line of retro-inspired electronic instruments with a new standalone semi-modular analog synthesizer called Grandmother. The $899 unit works all on its own, or can be connected to other sound making devices, like Moog's Mother-32, which doesn't have a built-in keyboard.

This new Moog standalone synth has a built-in arpeggiator, sequencer and spring reverb tank (based on the Moog 905), and it doesn't need any patching to make it work. You can, however, bypass the internal connections with your own patch cables, extending the sound-making capabilities of each module.

Grandmother has a 1/4-inch jack to connect a guitar or drum machine, as well. You can store up to three sequences, each with up to 256 notes and work two analog oscillators (based on the Minimoog) with their own selectable wave shapes and hard sync. There's a classic four-pole ladder filter (based on Moog's 904), a patchable 1-pole high pass filter, an analog ASDR envelope generator (based on Moog's 911) and LFO, and MIDI in/out/through capability. There are 41 patch points with 21 inputs, 16 outputs and a parallel-wired four-jack multi port.

Of course, Moog isn't the only synth maker reissuing classic gear. Korg has launched a couple of versions of its ARP Odyssey in 2015 and 2017, which have a similar design but a different sound and price point. Grandmother will debut at Moogfest this year (May 17th - 20th in Durham, North Carolina). Attendees will be able to get their hands on the device and watch new units being made on-site.

In this article: analog, av, gear, grandmother, moog, semi-modular, synth, video
All products recommended by Engadget are selected by our editorial team, independent of our parent company. Some of our stories include affiliate links. If you buy something through one of these links, we may earn an affiliate commission.