After AMD released its seven-nanometer Radeon VII graphics card with impressive-looking performance, NVIDIA CEO Jensen Huang responded by essentially trashing it. "The performance is lousy and there's nothing new," he told PC World. "No ray tracing, no AI. It's 7nm with HBM memory that barely keeps up with an [NVIDIA RTX] 2080."

NVIDIA's CEO doth protest too much, perhaps, but he's right to be worried. According to a CES performance tease, the Radeon VII actually beat the RTX 2080 in several video-editing and 3D-animation tasks. It also bested the RTX 2080 when playing Strange Brigade and other titles, especially at 4K resolution.

While NVIDIA just adopted 12-nanometer tech for the RTX series, AMD has moved on to seven-nanometer designs for the Radeon VII. Rather than criticizing its rival's performance, NVIDIA notably attacked AMD's lack of (NVIDIA-exclusive) features like ray tracing, G-SYNC and AI-powered DLSS anti-aliasing. However, that has yet to prove useful for gamers and doesn't help content creators at all. If ray tracing doesn't pan out and AMD keeps pushing the chip-design envelope, the next couple of years could get rough for NVIDIA. 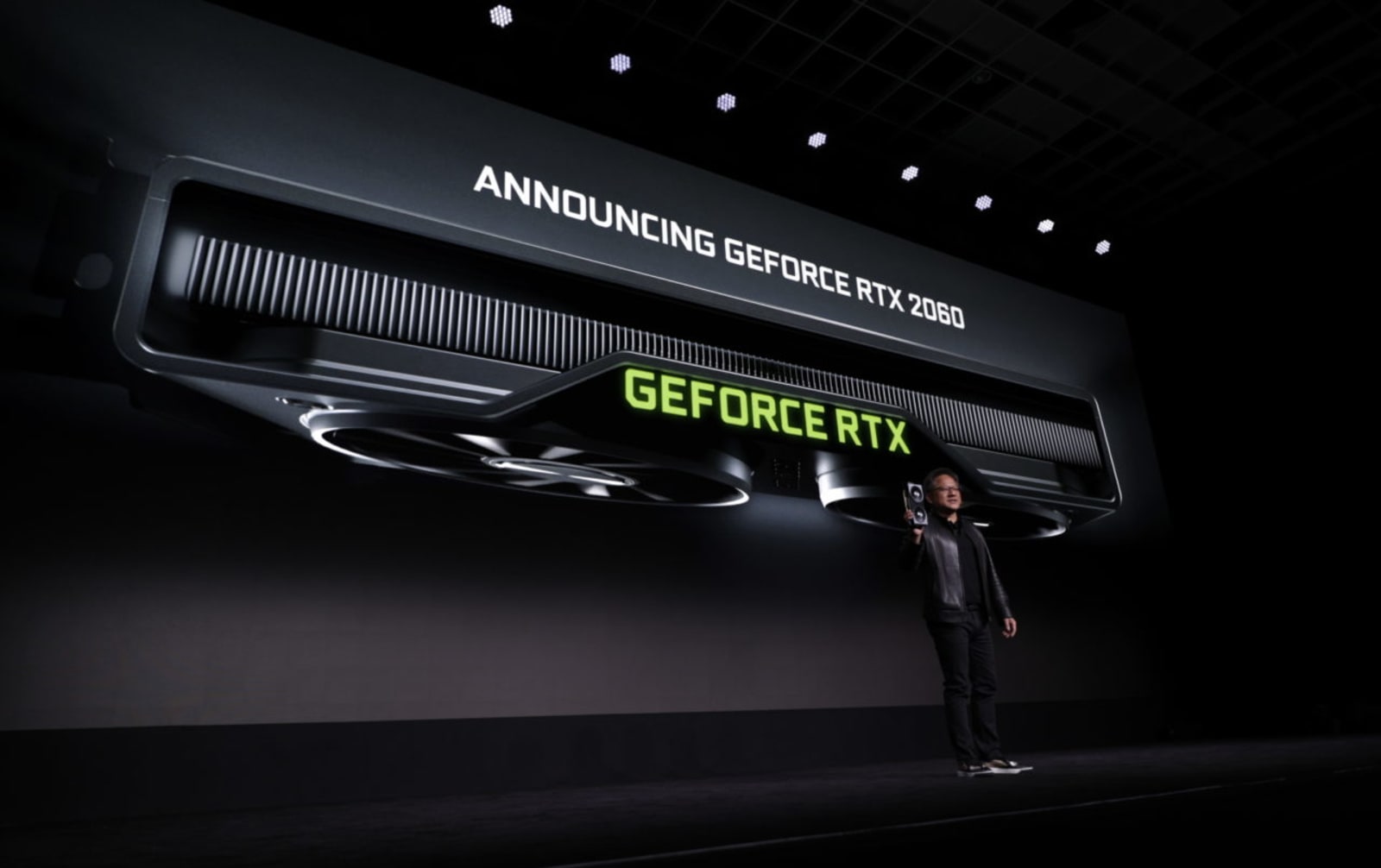 NVIDIA still dominates PC graphics, as its performance at CES 2019 clearly showed. It will own the laptop-gaming space this year with its all-new RTX Max-Q designs, as numerous PC makers introduced fast and light devices based on the GPUs. NVIDIA managed to shrink its chips down to a point where you can get a GeForce RTX 2080 Max-Q GPU into a 4.5-pound laptop, which is a pretty incredible feat.

During his last keynote, Huang spent more time talking about ray tracing than Max-Q. First he showed off some cinematic ray-traced graphics and how they improve games like Atomic Heart. Next he flaunted the company's AI-powered DLSS anti-aliasing tech running at 1440p resolution to smooth out blocky pixelation, along with a cool demo of light-scattering "caustics" in Justice.

After unveiling the midrange GeForce RTX 2060 at a not-exactly-cheap $345, NVIDIA launched into G-SYNC, announcing that it was testing and certifying a number of monitors packing AMD's FreeSync tech. Out of hundreds tested, Huang noted, only a dozen were certified, but he didn't stop there. "As you know, we invented the area of adaptive sync," he said. "The truth is most of the FreeSync monitors do not work. They do not even work with AMD's graphics cards." 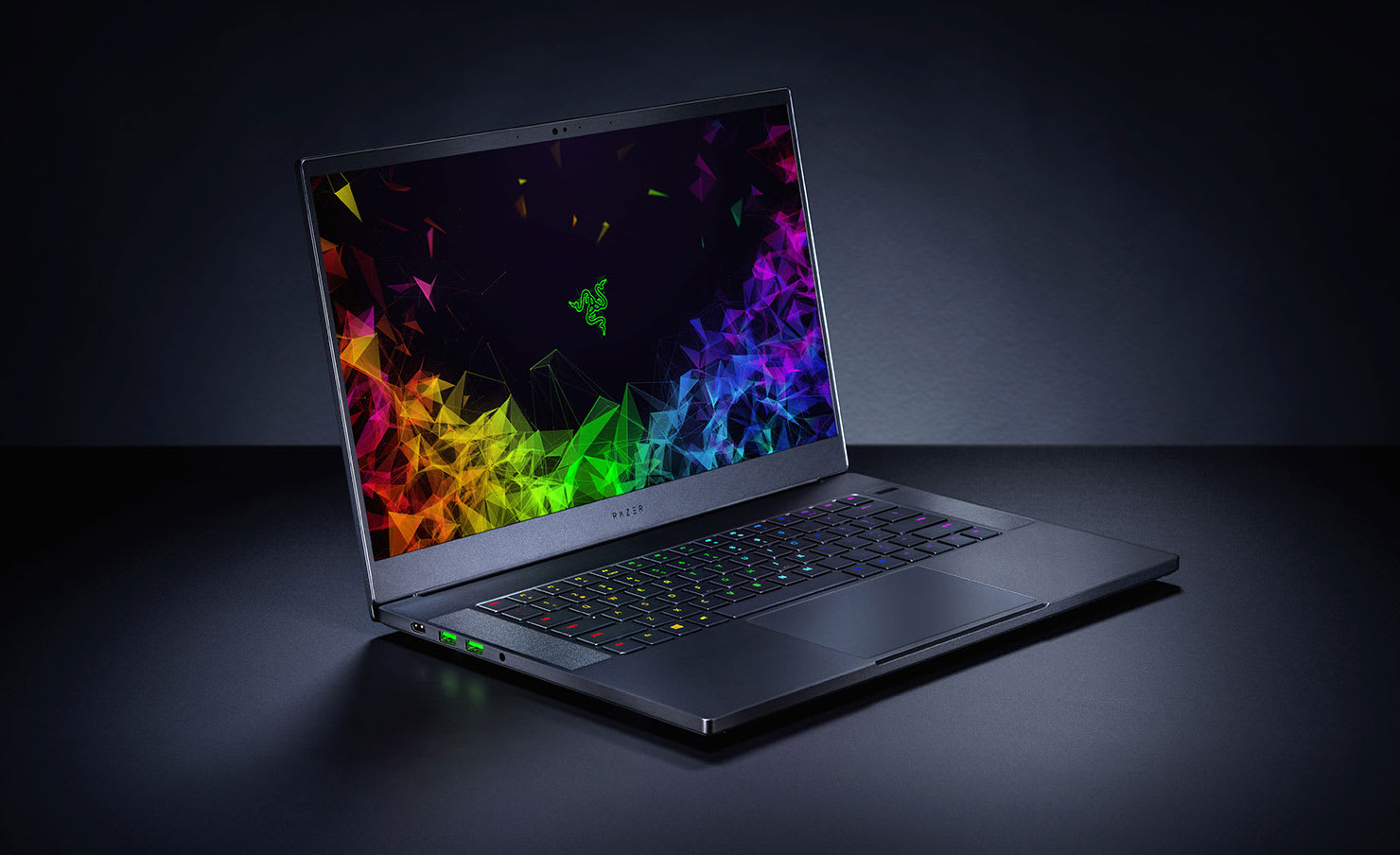 However, opinions of RTX ray tracing are mixed so far. A recent patch for Battlefield V has eliminated some of the stuttering and other problems, but frame rates are still about half of what they are when the feature is turned off. DLSS is another feature that makes games look better but also degrades performance. The results can be beautiful, but gaming companies must do extra work to implement both types of tech while knowing it won't work on AMD cards.

Huang said that FreeSync tech is problematic even on FreeSync monitors, but that doesn't quite jibe with users' experiences. G-SYNC does work better, especially near the lower limits of a monitor's certified refresh rates, according to many gamers and reviewers. However, many feel it's not worth the hefty premium you pay for the NVIDIA tech that must be integrated into the display. It's another way NVIDIA locks users into its ecosystem, giving itself more power to set (higher) prices. (Both companies recently unveiled new standards, AMD with FreeSync 2 and NVIDIA with G-SYNC Ultimate.)

Finally, it's worth noting that NVIDIA sells a large chunk of its GPUs to workstation users for video editing, 3D animation and graphics chores. While it has boasted that its latest chips allow for real-time 8K editing, the ray tracing and DLSS tech don't yet help content creators in any way. 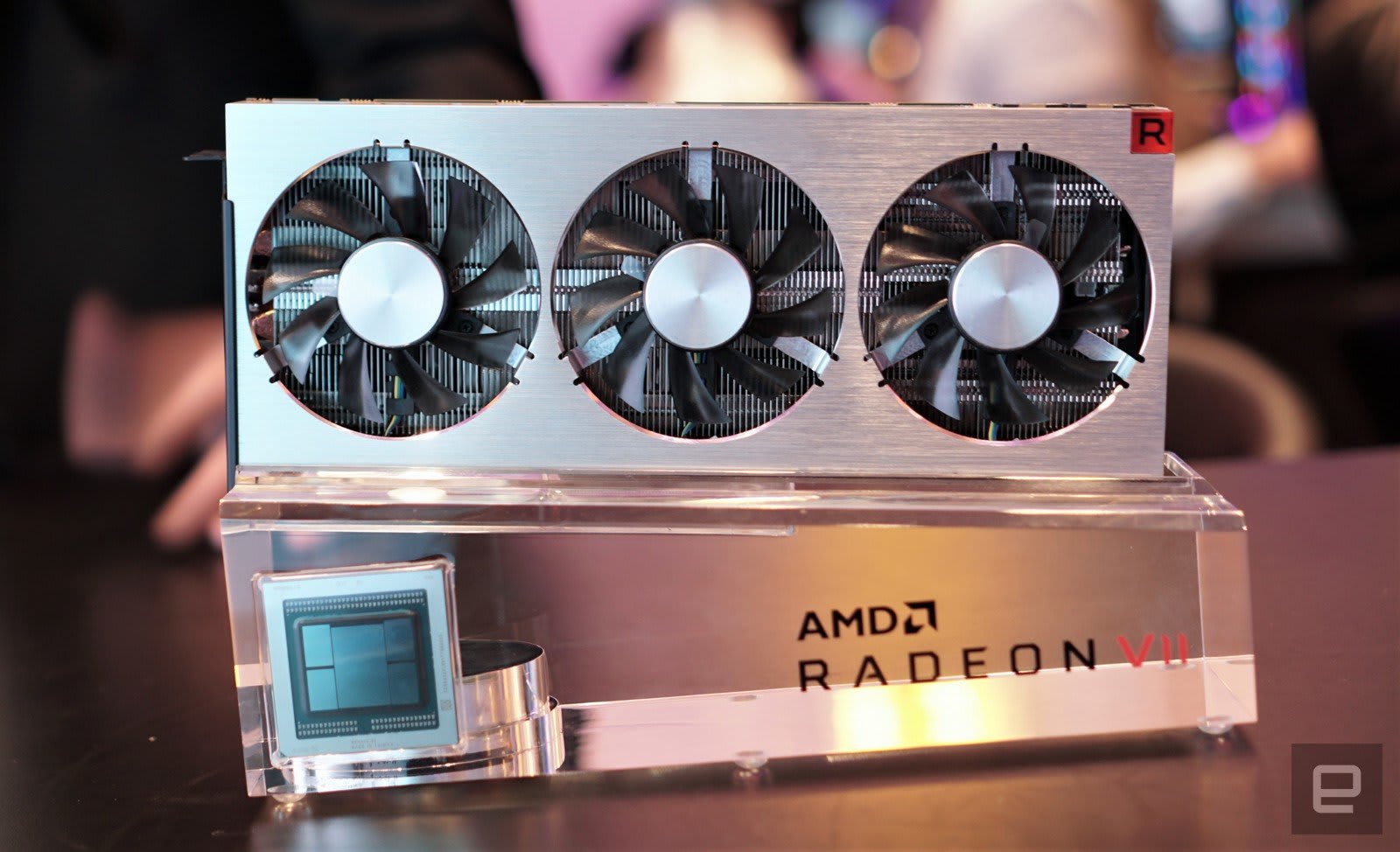 AMD unveiled not only a CPU that should unsettle Intel (Ryzen third-generation with seven-nanometer tech) but also the $699 Radeon VII graphics card. Using the seven-nanometer Vega 20 engine, it seems to have at least as much horsepower as NVIDIA's $799 RTX 2080, though it obviously lacks its rival's ray tracing and DLSS features. Still, it's the world's first seven-nanometer gaming GPU, meaning it's ahead of the 12-nanometer technology in NVIDIA's latest graphics cards.

AMD claims gaming performance that's more or less on par with the RTX 2080, besting it in some areas and falling short in others. Moreover, it shows its GPU beating NVIDIA's card when editing 8K video and doing color correction and other tasks.

However, all we saw from AMD at CES 2019 in terms of gaming laptops were ASUS' TUF laptops with Ryzen 5 CPUs and Radeon RX 560 discrete graphics. The company is supposed to start shipping more mobile GPUs soon, but until then, it's been all NVIDIA, all the time.

The Radeon VII doesn't have the AI tricks and ray tracing of its NVIDIA counterpart, however. While that doesn't impact gamers much yet, AMD has acknowledged that it will become an important feature. Ray tracing is "deep in development, and that development is concurrent between hardware and software," said CEO Lisa Su. "The consumer doesn't see a lot of benefit today because the other parts of the ecosystem are not ready."

What this means for gamers

It's encouraging to see that for once, AMD is actually ahead of NVIDIA with its seven-nanometer chip technology, at least in terms of transistor density. Given how NVIDIA significantly ramped its RTX pricing over the previous-generation GTX tech (the RTX 2060 starts at $345 while the GTX 1060 first hit the market at $100 less), anything that forces it to compete is a good thing.

The Radeon VII appears to stack up well to the RTX 2080 in terms of raw horsepower. Many gamers might prefer to pay $100 extra for the latter card, however, to get the ray tracing and anti-aliasing performance. If AMD's card does eat into its sales, NVIDIA has room to discount, and a price war between the companies would be great for buyers. AMD likely won't have a long time to stay ahead in the nanometer race, as NVIDIA is expected to switch soon to a seven-nanometer process (both companies' chips are built by TSMC).

The problem, though, is that the market is starting to get fragmented. In an effort to tighten its grip, NVIDIA is placing more emphasis on exclusive features like ray tracing, DLSS and G-SYNC. At the same time, it's de-emphasizing benefits where AMD can compete directly, like higher TFLOPs and memory bandwidth. AMD's own ray-tracing features, when they arrive, will likely be limited to its own cards too. That means that both consumers and game designers need to choose between one ecosystem or the other.

Both companies are competing for a smaller chunk of the graphics pie now that the bottom has fallen out of the cryptocurrency market. PC gamers are likely still feeling burned by the whole Bitcoin era, which saw graphics-card prices skyrocket. Both companies, particularly market leader NVIDIA, should be laying out the red carpet to try to drum up consumer enthusiasm. Instead, the new era of ray tracing and AI-powered graphics might leave everyone more confused (and abused) than ever.

All products recommended by Engadget are selected by our editorial team, independent of our parent company. Some of our stories include affiliate links. If you buy something through one of these links, we may earn an affiliate commission. All prices are correct at the time of publishing.
AMD is edging closer to breaking NVIDIA's graphic dominance
amd
DLSS
gear
GPU
Graphics
Max-q
nvidia
NVIDIARTX
personal computing
personalcomputing
Radeon
RadeonVII
RTX