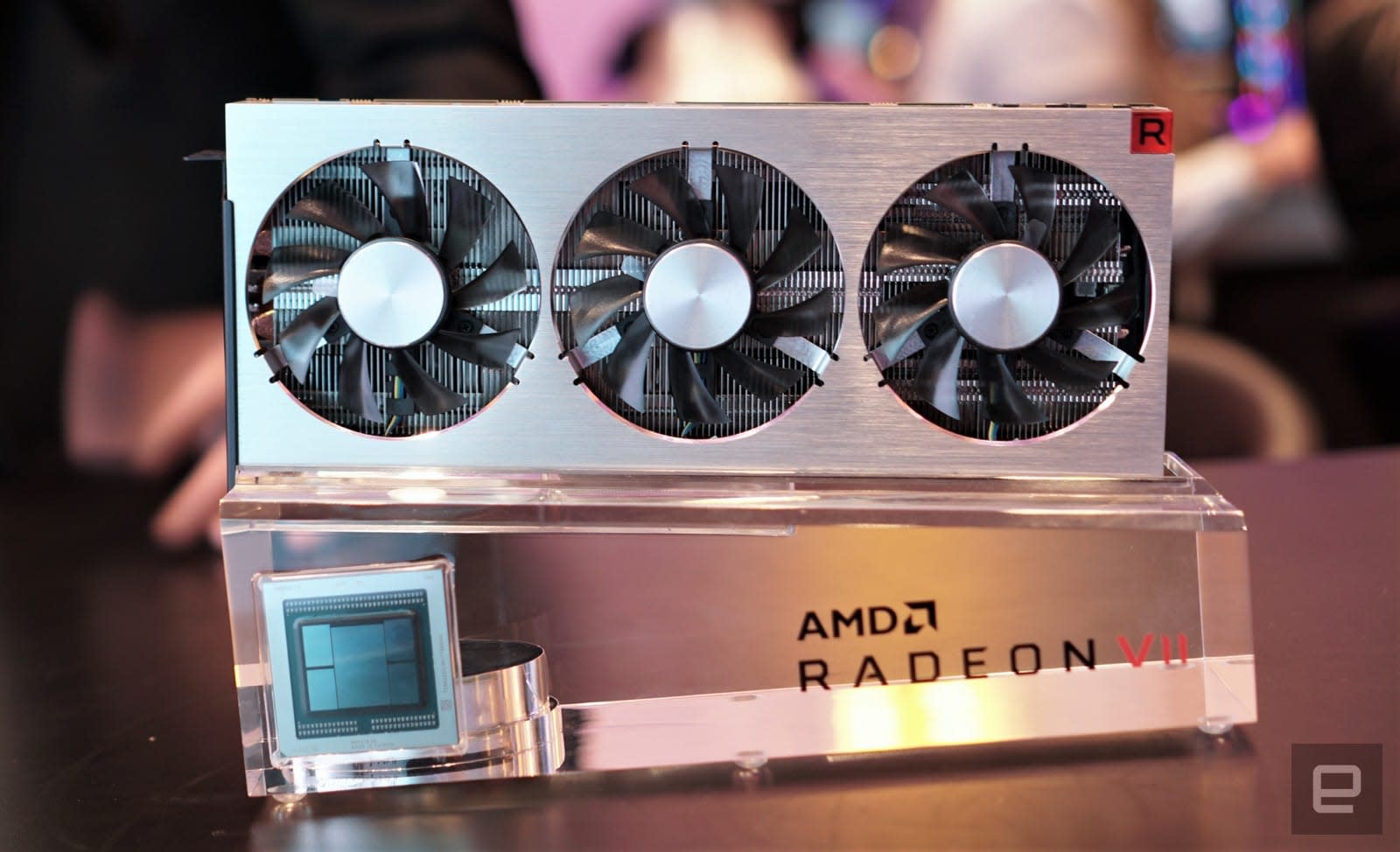 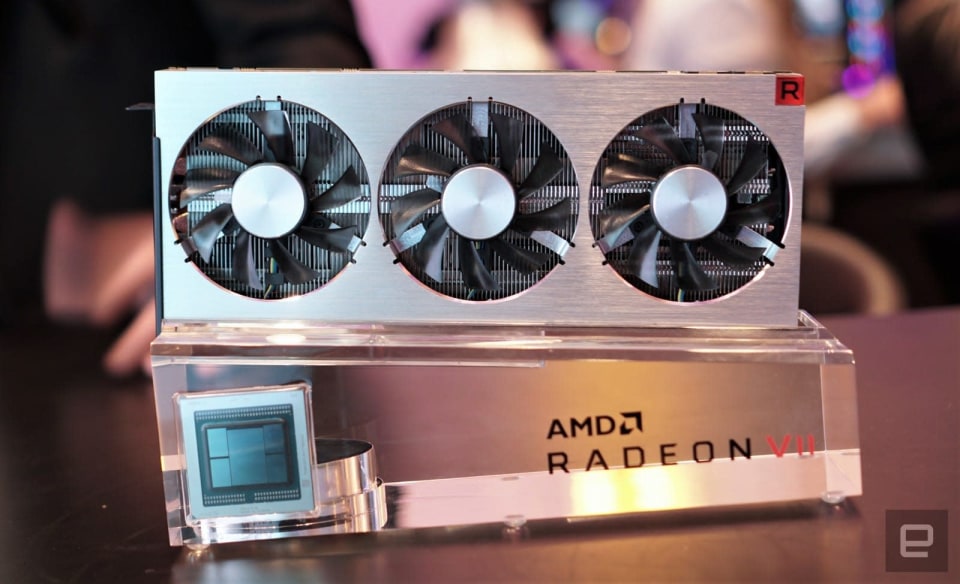 After lagging behind with Vega desktop GPUs for a few years, AMD announced a major upgrade today: the Radeon VII, the first 7nm GPU for gamers. It's a powerful card capable of serious 4K performance. Its new architecture means it won't use up too much power, leaving plenty of room for overclockers to take it even further. But there's no real-time ray tracing, a technology that NVIDIA has been pushing since last year, when it unveiled its RTX desktop GPUs. So where does this leave AMD? "Our vision on gaming is very broad. We think about it across PCs, consoles, cloud and how we deliver content into all those pieces," said AMD CEO Lisa Su in a conversation with journalists at CES. "I think ray tracing is an important technology, it's something we're working on as well from both a hardware and software standpoint. I think the important thing, though -- and that's why we talk so much about the development community -- is that technology for technology's sake is OK, but technology done together with partners and really getting the development community fully engaged is really important."

Su says we'll be seeing more gaming talk from AMD this year and beyond. That's not too surprising, as we're expecting both Microsoft and Sony to start talking about their next-generation consoles soon. Those systems, which are expected to launch in 2020, will likely rely on AMD's custom graphics silicon, as we saw with the PlayStation 4 and Xbox One.

"We view it as a broad ecosystem. We don't focus on just one technology; we need all this stuff to really come together," Su said. That's an understandable strategy for AMD. Even though NVIDIA has been talking about real-time ray tracing for the past year and just announced notebook RTX chips, there are still only a handful of games supporting that technology. And it didn't help that the RTX 2070 and 2080 were much more expensive than the previous generation's GPUs. (The recently announced RTX 2060 is its first "affordable" ray tracing card.) If you actually want consumers to see the value of ray tracing, it might make more sense to wait until there are games and plenty of developers using it first.

"Why we're so excited with Radeon VII is it brings a phenomenal performance boost to gamers without any software modification required by our gaming developer partners," said AMD CTO Mark Papermaster in an interview with Engadget. "What we try and do at AMD is being focused on delivering that value in an ecosystem that can be readily accepted. ... Ray tracing is something that we believe the whole industry has to move to. There's no question. But it has to go through that whole development cycle."

During her CES keynote, Su also announced the third-generation Ryzen desktop processors, which are meant to compete with Intel's new ninth-generation chips, even the top-end Core i9-9900K. They're also built on a 7nm architecture, which delivers the same benefits as the Radeon VII: a lower power draw while still delivering plenty of performance. Su also hinted that the upcoming Ryzen CPUs will pack in even more cores than what we saw her demo onstage. "There is some extra room on that package, and I think you might expect we'll have more than eight cores," she said. 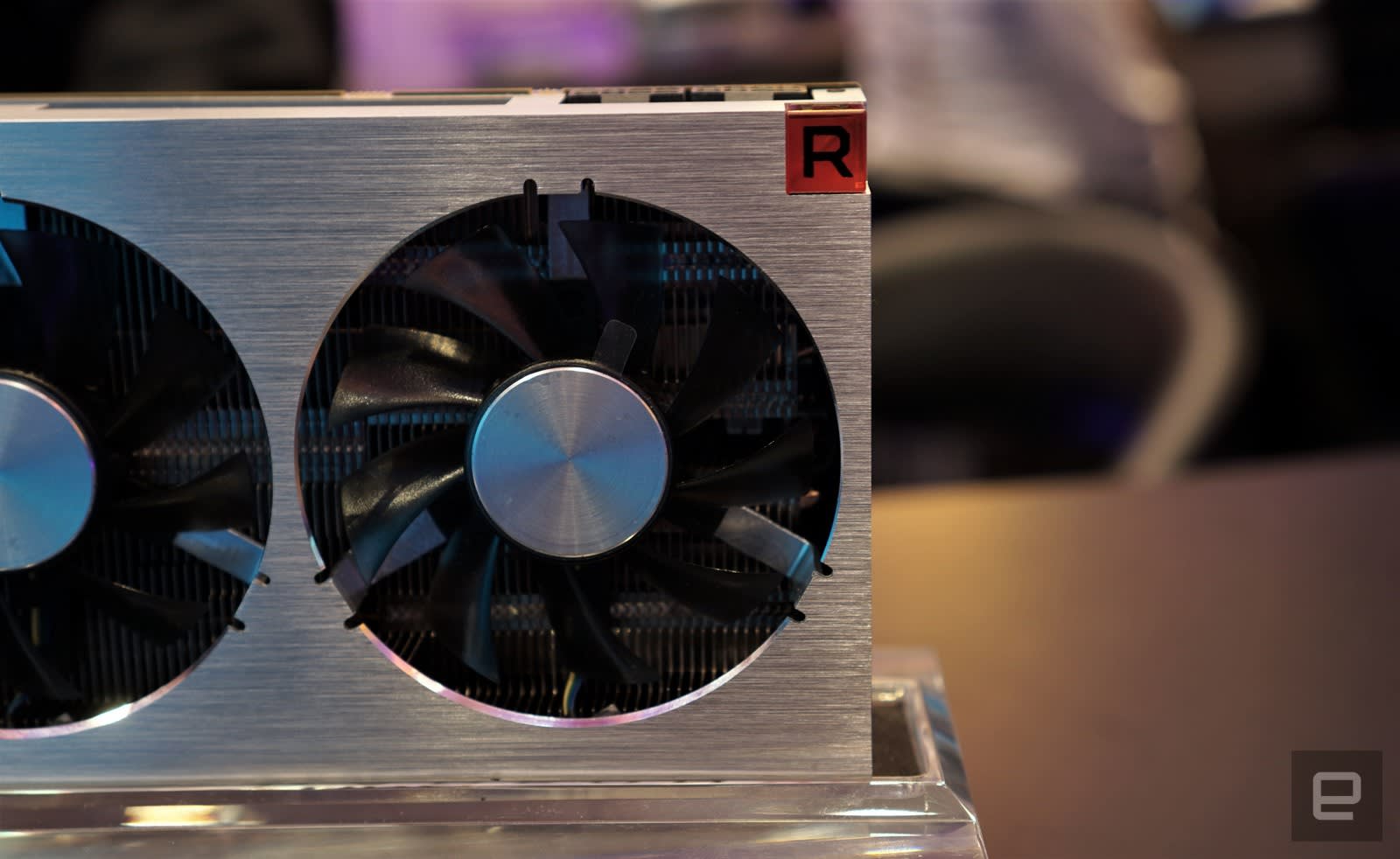 At this point, AMD's 2019 is already off to a more interesting start than 2018, when it didn't have a new high-end video card. We were intrigued by the company's Ryzen mobile chips, which packed in some decent Vega mobile graphics for casual gaming, but we didn't see too many systems that took advantage of it. Su said AMD will be working more closely with manufacturers when it comes to marketing and designing those systems, which hopefully means more consumers will be aware of upcoming Ryzen mobile notebooks.

In this article: amd, CES2019, gadgetry, gadgets, gaming, gear, LisaSu, MarkPapermaster, personal computing, personalcomputing, RadeonVII
All products recommended by Engadget are selected by our editorial team, independent of our parent company. Some of our stories include affiliate links. If you buy something through one of these links, we may earn an affiliate commission.