Instagram denies that it's limiting the reach of posts

A copypasta claims Instagram only shows your posts to 7 percent of your followers.

Over the past few months, you might have seen Instagram posts claiming that the platform has only been showing your photos to seven percent of your followers. Turns out it's just some weird copypasta, which became big enough for the company to address. In an official statement posted on Twitter, Instagram has clarified that it hasn't made any changes to its algorithm recently and that it never hides users' posts. If you scroll down far enough, you will come across everyone's photos -- it's just that you might have a hard time seeing some friends' posts if you don't interact with them regularly and you're following tons of people. 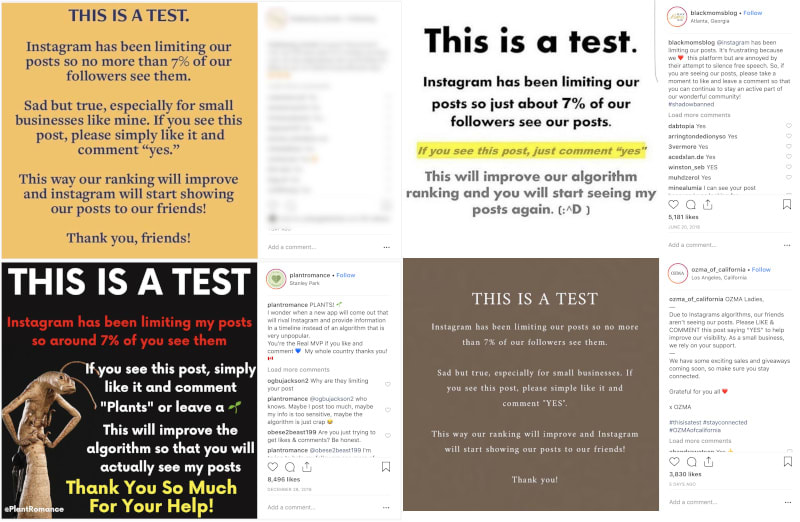 The platform explained that the level of interaction determines the order of posts you see in your feed. It's clear from the comments in that Twitter thread, though, that people don't think that's any better. Users are asking Instagram to go back to displaying posts in chronological order like it did before it adopted Facebook's algorithmic feed. Instagram will likely continue to pattern its feed after its parent company's, though, so you may want to pay more attention to the posts of people you actually care about.

We've noticed an uptick in posts about Instagram limiting the reach of your photos to 7% of your followers, and would love to clear this up.

What shows up first in your feed is determined by what posts and accounts you engage with the most, as well as other contributing factors such as the timeliness of posts, how often you use Instagram, how many people you follow, etc.

We have not made any recent changes to feed ranking, and we never hide posts from people you're following – if you keep scrolling, you will see them all. Again, your feed is personalized to you and evolves over time based on how you use Instagram.✌️