On paper, they beat both Nikon and Canon’s mirrorless full-frame models.

Panasonic has officially barged into the full-frame mirrorless fight by launching two new cameras. The S1 is a 24.2-megapixel camera mainly targeting video shooters, while the 47.3-megapixel S1R is for portrait, landscape and other types of high-resolution photography. They looked promising when we saw them at Photokina last year, but there was still a lot we didn't know. Now we not only have the full picture, but I've had a chance to handle the cameras for the better part of a day.

The new models beat their rivals from Sony, Nikon and Canon in several ways, especially when it comes to stabilization and 4K video. As it stands now, they look like very competent models that will make your full-frame mirrorless buying decision that much harder -- if it wasn't hard enough already.

Panasonic built the cameras with a lot of input from its stable of pro photographers and video shooters. "It's designed to stay out of the way and let you do your work," Panasonic told Engadget. "We want to minimize moving your hand on the camera body, keep your eye to the viewfinder and help you stay involved in what you're doing."

That starts with the grip and materials. The grip is one of the largest out there, even bigger than the one on Canon's EOS R. It's very easy to handle, and there's no way I'm going to accidentally drop this, even with a huge lens attached. Panasonic also paid close attention to button placement and even how each button feels, so you don't hit the wrong one. I'm pretty familiar with Panasonic's GH5 layout and felt right at home with the new models.

Panasonic didn't see the need to compete with rivals on size, as the bodies weigh just over 1,000 grams, considerably more than the Nikon Z6/Z7, Canon EOS R and Sony A7 III/A7R III. They're weather-sealed, as are the lenses, and can operate at temperatures down to -10 degrees Celcius (14F).

Videographers will be happy to see microphone and headphone ports, and there's also a USB Type C port for data and charging. Battery life is rated at 360 shots, but Panasonic said that real-world performance should be better. Still, as with other full-frame mirrorless models, you'll need to carry around more batteries than you would with a DSLR, which negates some of the weight advantages. 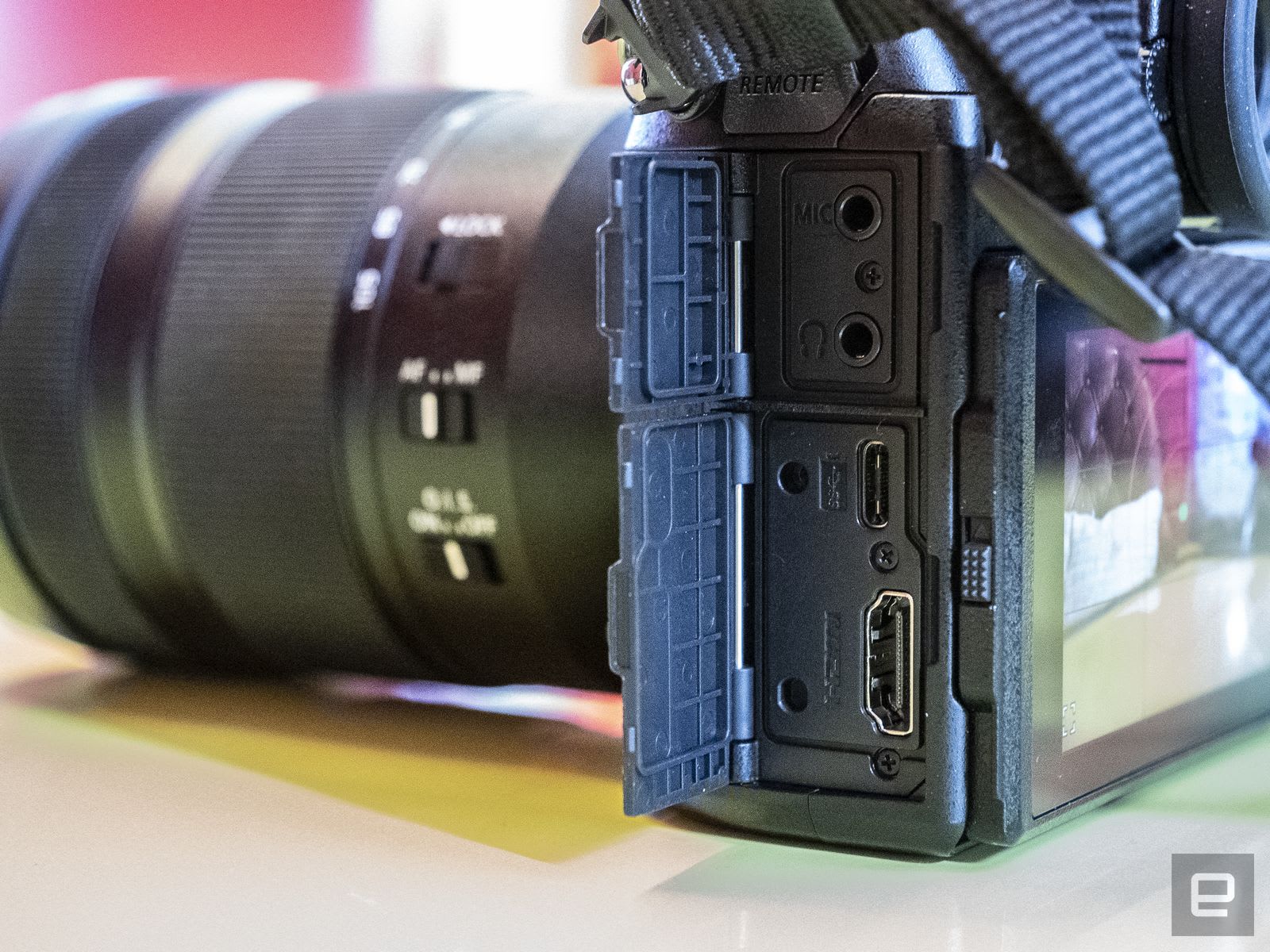 Panasonic did one better than its rivals by building the S1 and S1R with two memory card slots. Weirdly, one is SD UHS type II and one is XQD, so you'll need to carry two types of cards, but at least you can have a backup. That will be a bit awkward, though, because XQD is a lot faster than UHS II, with max speeds at 440 MB/s compared to 300 MB/s. That differential will get even larger when Panasonic adds support for 1,400 MB/s CFexpress cards in a future firmware update.

The S1 has better low-light capability, especially when shooting video. The normal ISO range is 100 to 51,200, or 50 to 102,400 in expanded mode. The S1R maxes out at 25,600 in regular mode or 51,200 expanded. Panasonic said it listened to concert and other event photographers and was obviously confident about the low-light capabilities of the new cameras.

If you need more resolution for landscape and other static images, there's a high-resolution mode that takes multiple, slightly offset photos of the same scene. It delivers 96-megapixel images for the S1, while the S1R can shoot incredibly detailed images at 187 megapixels, equivalent to 16,736 x 11,168 pixels. The best part is that it works even handheld, thanks to the image stabilization system, and can eliminate blurring for things like trees blowing in the wind.

During my testing, I tried multiple indoor shooting scenarios in bars and other dim-light situations, and the cameras, especially the S1, performed very well at ISOs all the way up to 12,800 and even beyond. I was only able to evaluate JPEG image quality as RAW files aren't yet supported by image-editing apps. However, colors appeared accurate and the images have very little noise even at high ISO settings. With 47.3-megapixels of resolution, the S1R obviously produces very sharp images and very large file sizes at the highest settings.

Rather than building an all-new mount, like Nikon and Canon did, Panasonic joined forces with Leica and used its L-Mount system. It's bigger than Sony's full-frame FE mount, which will help engineers build fast, compact lenses.

The larger mount also leaves more room for the in-body stabilizer (IS). Panasonic managed to get 5.5 stops of shake correction or six with a compatible lens. That means you can shoot with much lower shutter speeds, like at 1/8th of a second instead of 1/60th, for instance. That's equal to what the GH5 can do, but not quite as good as the G9's system. Still, it was apparently quite a feat, considering that the sensor is four times larger. Panasonic said the IS system on the S1/S1R is quadruple the size of the one on the GH5, which is one reason the new cameras are bigger and heavier.

I haven't got the smoothest handling skills, but the stabilizer managed to give me in-focus shots at shutter speeds all the way down to about 1/8th of a second. As for video, I found shots to be usable even when I was walking down the street. With a bit of practice, I think it could even be used instead of a true stabilizer in a pinch.

Panasonic also introduced a new stabilization feature that makes you wonder why nobody did it before. It overlays the IS status on a scope on the viewfinder or display, showing how much if you're moving off center. The idea is to help you improve your handheld technique to get smoother video or less blurry photos.

A small dot moves in the middle of two concentric circles, showing how much you're jerking the camera around. If you can keep it inside the circles, it means the stabilizer can move far enough to smooth out your movements. If you move outside of them, then it has hit the edge of its travel, and you're going to see a jolt if you're shooting video, or a blurry photo. Having a visual clue as to what the stabilizer is doing makes it far less of a "black box" and more of a tool you can control. 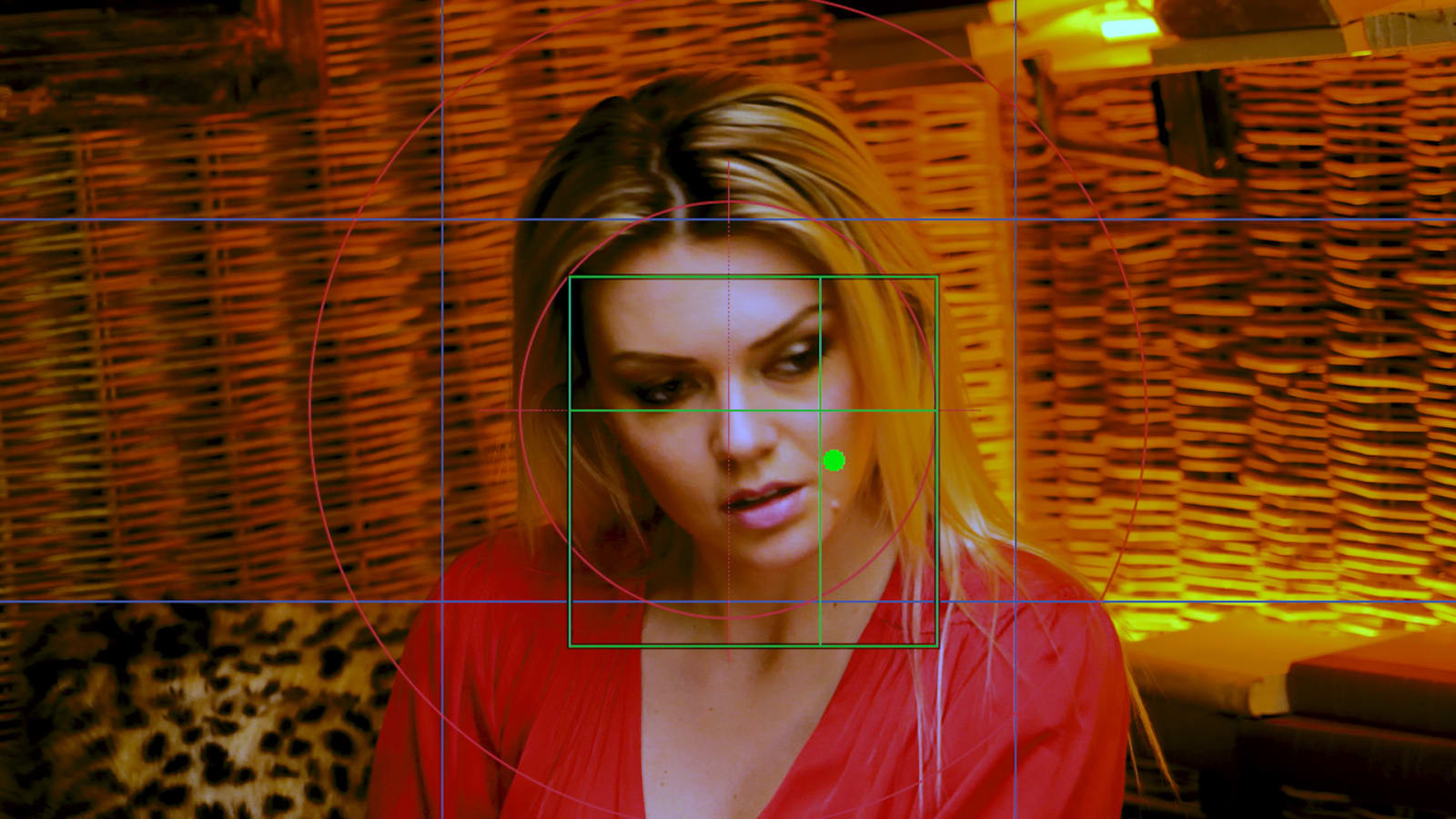 The OLED viewfinder is incredible. It's the highest-resolution model out there, with 5.7 million dots and a 120Hz refresh rate. As I found while using it, this tech pretty much destroys any remaining arguments for using an optical viewfinder. The extra resolution is brighter and clearer than anything an optical display can do and shows the exact results you'll be recording. To me, the colors seemed accurate, and the optics on the EVF are excellent -- in short, everything I've been hoping that an EVF could be.

The rear triaxial screen can be tilted right and left, but not all the way around so selfie shooters and vloggers can see themselves. That's a pretty odd decision, considering that the GH5/GH5s has a sweet, fully articulating screen. My guess is that Panasonic wants to keep that tech for its pro-level Micro Four Thirds cameras to preserve the market for them.

At first, I was disappointed that Panasonic stuck with its contrast-detect "depth from defocus" (DFD) AF system. In my experience, it's not as fast as the phase-detect systems on Sony's A7 series and Canon's Dual Pixel mirrorless cameras. It's also proven to be not as good for video, as contrast detect systems tend to "hunt" unpleasantly before locking on to focus.

However, it's the same DFD system used on the GH5/GH5s, and after a recent update, the performance on those cameras was much improved, with far less, if any, focus hunting. Panasonic is using an AI system and said that it will allow the autofocus system to improve over time. 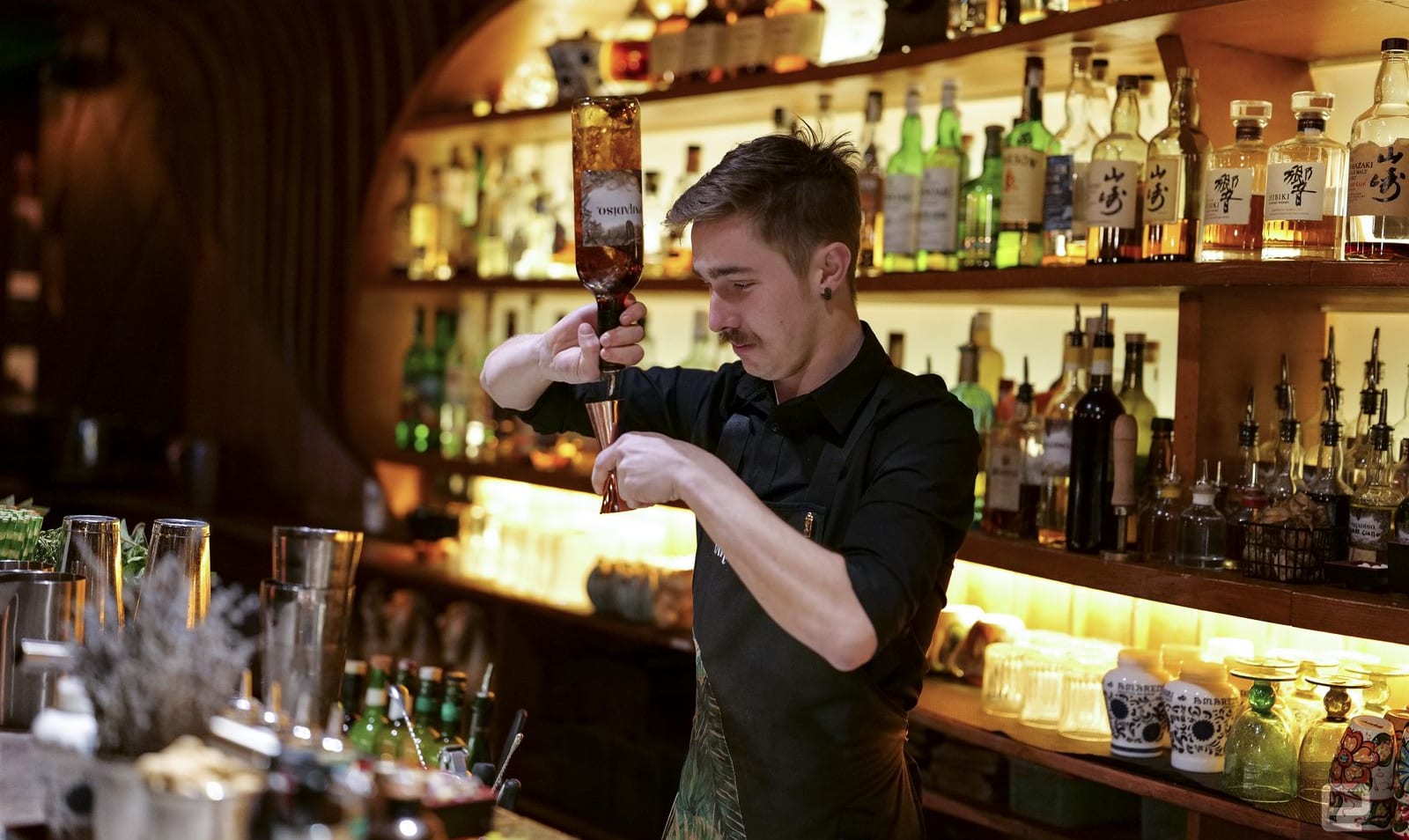 Focus is rapid (though not as rapid as Sony's A7 III), with a lock-on time of just 0.08 seconds, and you can shoot up to 9 fps with single autofocus (AF-S) and 6 fps in continuous (AF-C) modes. The buffer can handle up to 40 RAW shots, or 90 if you use the faster XQD slots.

Panasonic set up a few shooting scenarios, including several bar scenarios, static food and some studio scenes complete with lights. While it locked on to focus most of the time, it occasionally lost track of faces, eyes and bodies, though once it had locked on to a subject, it tended to stay with it persistently.

As for video, autofocus seemed slower than on Panasonic's GH5 Micro Four Thirds cameras, though hunting was minimal to non-existent. Video face-tracking was again not quite as quick and accurate as on the GH5. Overall, the system was not bad, but lagging behind Sony's powerful eye AF system. However, these cameras aren't final production models and don't have final firmware, so we'll reserve judgment for a full review.

Video is where the S1 and S1R are most different from each other. The specifications of both cameras are a bit complicated, so bear with me here. Suffice to say, you'll get very powerful video capabilities, especially with the S1.

On the S1R, you can shoot all the way up to 4K 60p with no cropping. However, both video modes introduce line skipping, so 4K video is not quite as sharp as the S1. To get a full pixel readout, you'll need to use APS-C cropping for all 4K modes.

Panasonic has promised it'll eventually shoot 4:2:2 10-bit video internally via a firmware update like the GH5 can. That update will reportedly not be free, but there's no word yet how much it'll cost. Unfortunately, the cameras won't get ProRes RAW recording, a feature that offers much higher video quality and recently came to Nikon's Z-Mount cameras. 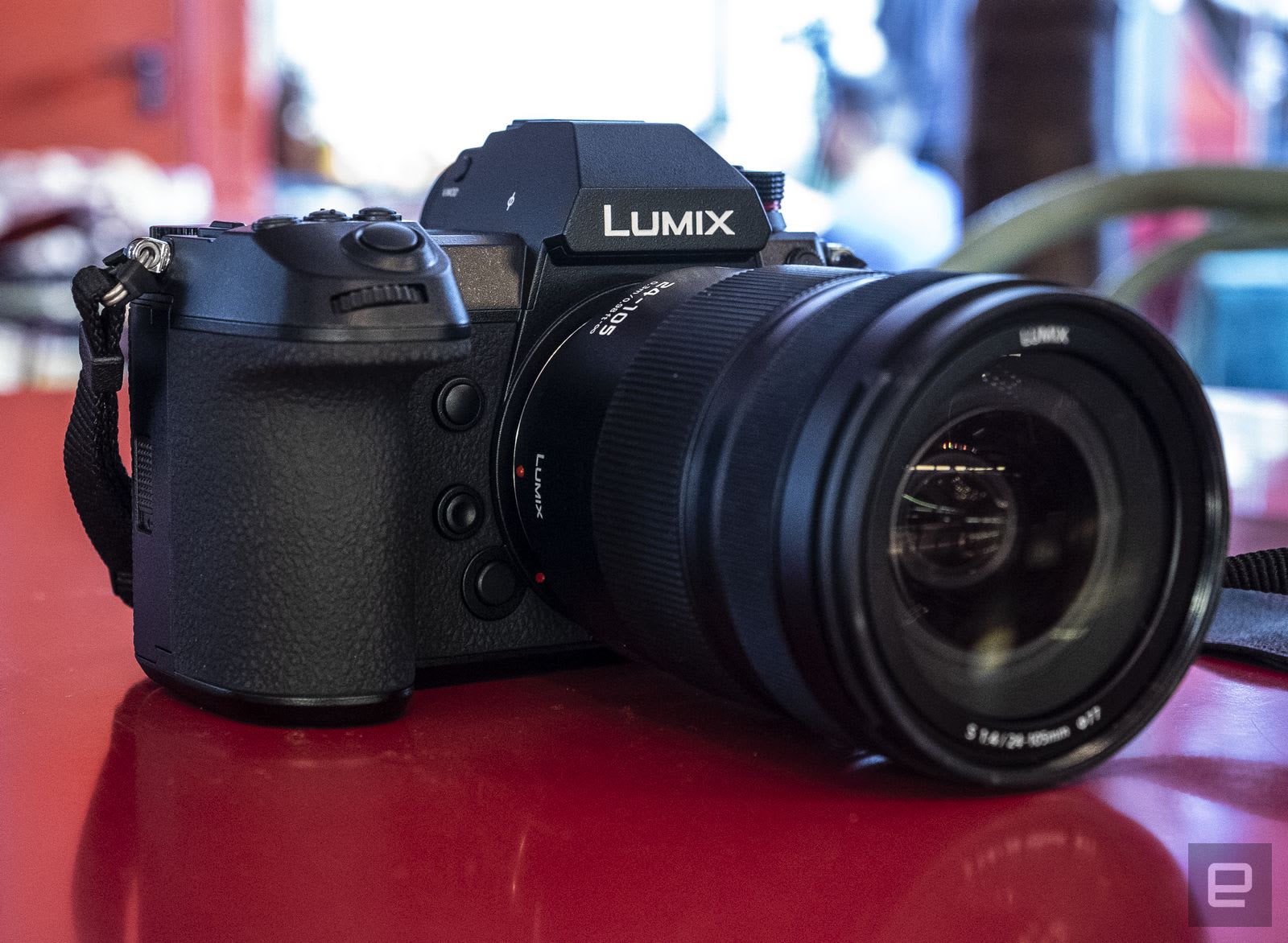 In my brief time with both cameras, I'm optimistic about their video capabilities. The video looks crisp with rich colors, especially on the S1 model, and is capable of very shallow depths of field thanks to the larger sensor. If Panasonic can bring the capabilities up to the level of the GH5 and GH5s, this camera could be the full-frame mirrorless camera to beat for video.

With the S1 and S1R, Panasonic has gotten off to a better start than Canon and Nikon. They're loaded with features like in-body stabilization, dual card slots and 10-bit video, which are missing on rival models. Panasonic jammed as much tech as it could into them, and based on my limited first impression, they seem to perform just as well as they look.

However, at $2,499 ($3,399 with the 24-105mm f/4 lens), the S1 is a bit more expensive than the Nikon Z6, Canon EOS R and Sony A7 III. Given the impressive capabilities and huge sensor, though, it will be a no-brainer for many professional videographers. The lack of a fully articulating display is a bummer for vloggers, but otherwise, it's the most capable full-frame mirrorless camera for video.

Perhaps pricing is the main flaw with these new cameras. It's not that much higher than Sony, Canon and Nikon's devices, but when you add in the lenses, you're looking at a lot of cheddar. The full-frame mirrorless market is suddenly very saturated, and there are only so many folks with $3,000 or more to spend on a camera system. Both cameras go on pre-order today, with availability by early April.

All products recommended by Engadget are selected by our editorial team, independent of our parent company. Some of our stories include affiliate links. If you buy something through one of these links, we may earn an affiliate commission. All prices are correct at the time of publishing.
Panasonic S1 and S1R hands-on: Feature-packed full-frame cameras
Alliance
cameras
full-frame
gear
hands-on
L-Mount
Lenses
mirrorless
Panasonic
S1
S1R
video