With the Moto G7 family, Motorola has a midrange phone for everyone

But is there such a thing as too much variety?
C. Velazco|02.07.19
@chrisvelazco

Motorola's flip-phone-inspired foldable might be generating all the buzz, but the Lenovo-owned brand is arguably still best known for its midrange Moto G phones. That's not a bad thing either. Year after year, Motorola dutifully churns out some of the best wallet-friendly smartphones you'll find, and with the introduction of the new, $299 Moto G7, that streak seems to be going strong in 2019. With all that said, though, Motorola's midrange plan this year isn't exactly business as usual.

For one, it seems like Motorola is trying to dodge a glut of trade show news by announcing its new stuff ahead of this year's Mobile World Congress. And more importantly, we're getting three -- three! -- new Moto G phones right off the bat. There's the G7 itself, plus two variations on the theme: the $199 G7 Play for shoppers on a tighter budget and the $249 G7 Power for people who need insanely long battery life. (To confuse matters further, there's an even-higher-performance version called the Moto G7 Plus, but the company doesn't plan to bring it to North America -- oh, well.)

In years past, Motorola gave G-series phones in the same family different processors, but that has changed too. Each version of the G7 coming to the US packs one of Qualcomm's octa-core Snapdragon 632 chipsets, albeit with different RAM allotments: The Play has 2GB, the Power has 3GB and the top-tier G7 has 4GB. That power parity was a pleasant surprise, and during some hands-on time at an event in New York City, all three felt plenty responsive. (It definitely doesn't hurt that all three devices run near-stock versions of Android 9.0 Pie.) These phones aren't going to run identically, but they seem close enough that a smartphone shopper doesn't need to worry too much about buying the wrong one. This year, Motorola seems more concerned with giving people the right phone for the right context. 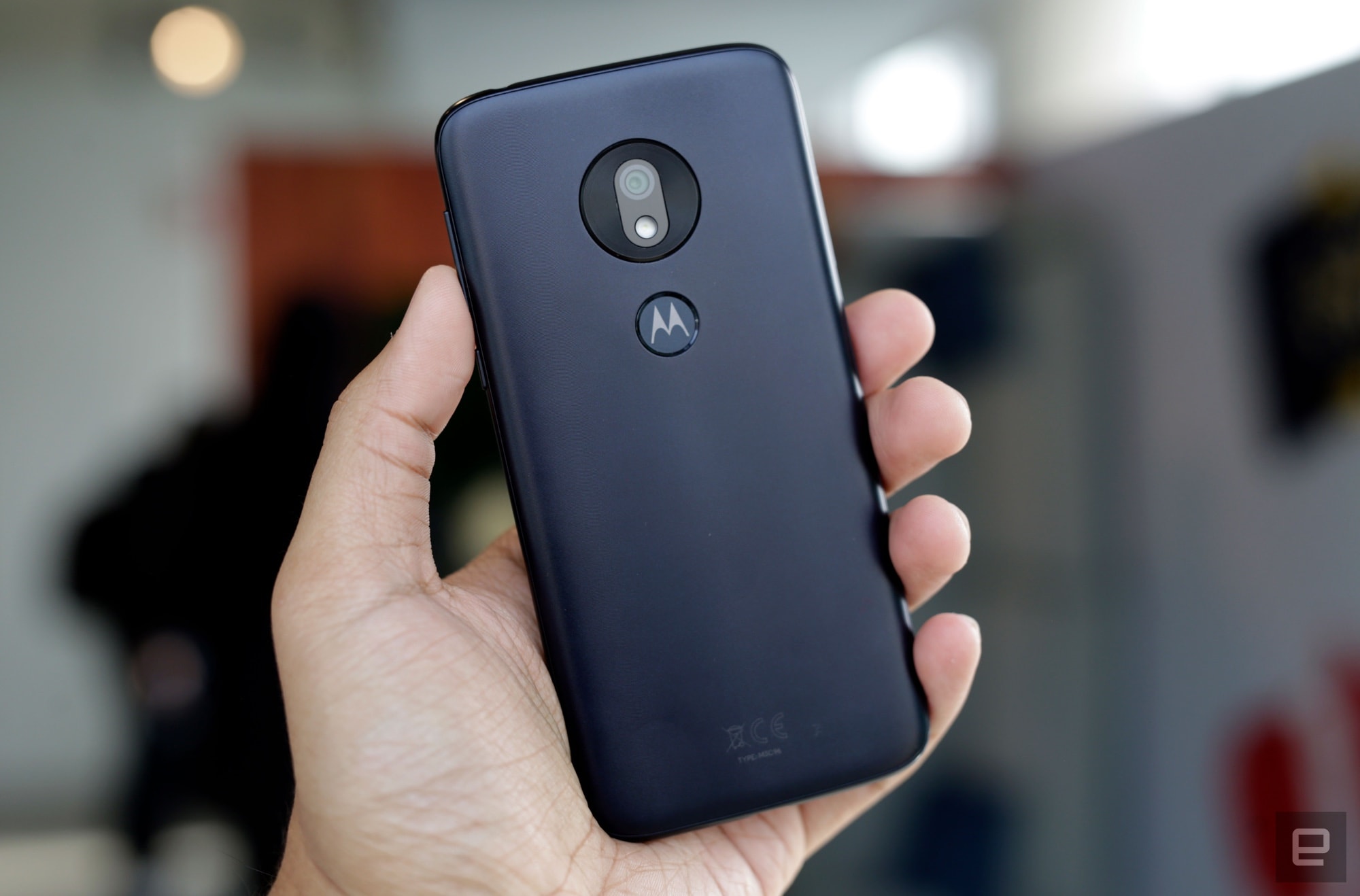 The Moto G7 is the cheapest and least interesting of the lot.

The G7 Play, for instance, is the cheap model geared toward people who prefer smaller devices. It packs a 5.7-inch, 19:9 MaxVision display running at 1,512x720 along with 32GB of internal storage, a microSD slot that takes cards as large at 512GB, a headphone jack and a mostly-just-OK 13-megapixel camera. Of all the new G7 models, the Play is the most comfortable to use because of its relatively compact design, and unless you had your nose pressed right up against that notched display, you probably wouldn't be able to tell it was running at less than 1,080p.

As mentioned, it's pretty snappy in the performance department, too, though the 2GB of onboard RAM mean the Play is bound to slow down more noticeably once you have lots of apps running. All told, it's a perfectly serviceable option for folks who really don't want to spend too much on a smartphone, but the Play is easily the least interesting of Motorola's new devices.

Price-wise, the G7 Power sits in the middle of the pack, but its standout feature gives it a clear edge over the rest of Motorola's new lineup. Despite being only marginally bigger than the more premium G7, the Power packs a whopper of a 5,000mAh battery, which Motorola says is rated for up to three days of use off a single charge. (We'll be the judges of that, thank you very much.) 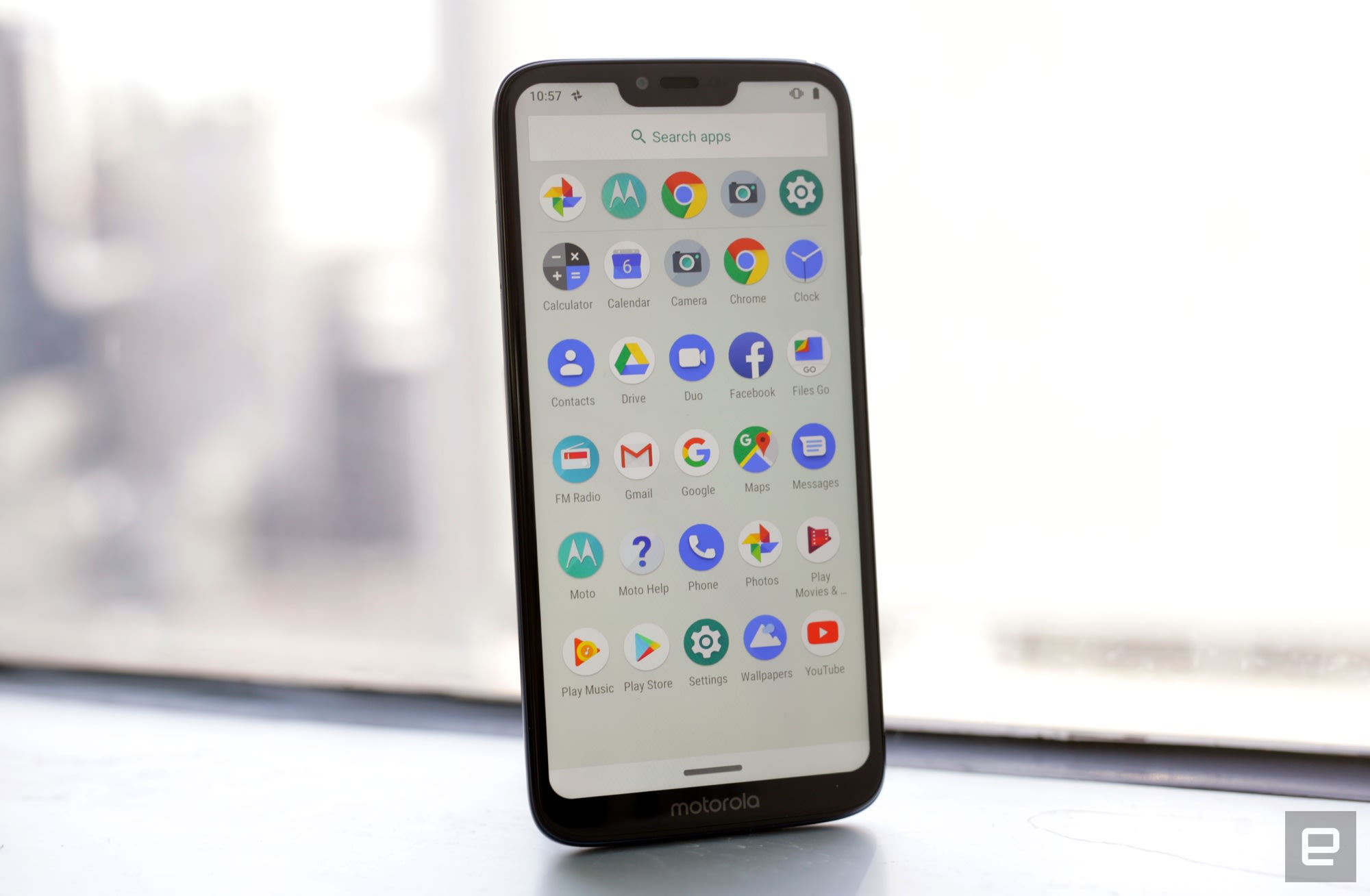 That Motorola managed to squeeze such a big battery into a body that doesn't feel that big is a feat worth admiring, even if it made me wish the company had done the same for the G7. Getting three days of use out of a phone required some compromises though: The Power's 6.2-inch screen is just as big as the G7's but runs at 1,520×720, so individual pixels will be more noticeable when you get really close to the display.

To be clear, the notched screen here is still more than adequate for daily use, and for people who care about battery life more than anything else, the trade-off is easily worth it. The 12-megapixel camera isn't half bad either, and while it technically shoots at a lower resolution than the cheaper Play, the Power's sensor has larger pixels for improved low-light performance. Throw in an extra gig of RAM compared to the G7 Play, 32GB of storage (again expandable with microSD cards), a headphone jack and a decent eight-megapixel, front-facing camera and we're left with a tantalizing twist on the G7 formula.

That leaves us with the regular G7, which, despite not having a more descriptive name, is the best of the lot. The G7 also happens to be the prettiest of the three, for a few important reasons. Instead of a wide, Apple-style notch to house the speaker and front-facing camera, the G7 uses a now-common teardrop cutout to hide its eight-megapixel front camera. The 19:9, 6.2-inch display also runs at Full HD+ (2,270x1,080, for those keeping track), making it the nicest G7 model to actually look at. The bezels running around that screen are the thinnest you'll find on all the new G7 variants. And while last year's Moto G6 had a body covered mostly in Gorilla Glass 3, the G7 adds an eye-catching metal frame that's also quite nice to hold onto. (There's a lovely white model in addition to the standard black, too, and man, is it pretty.) 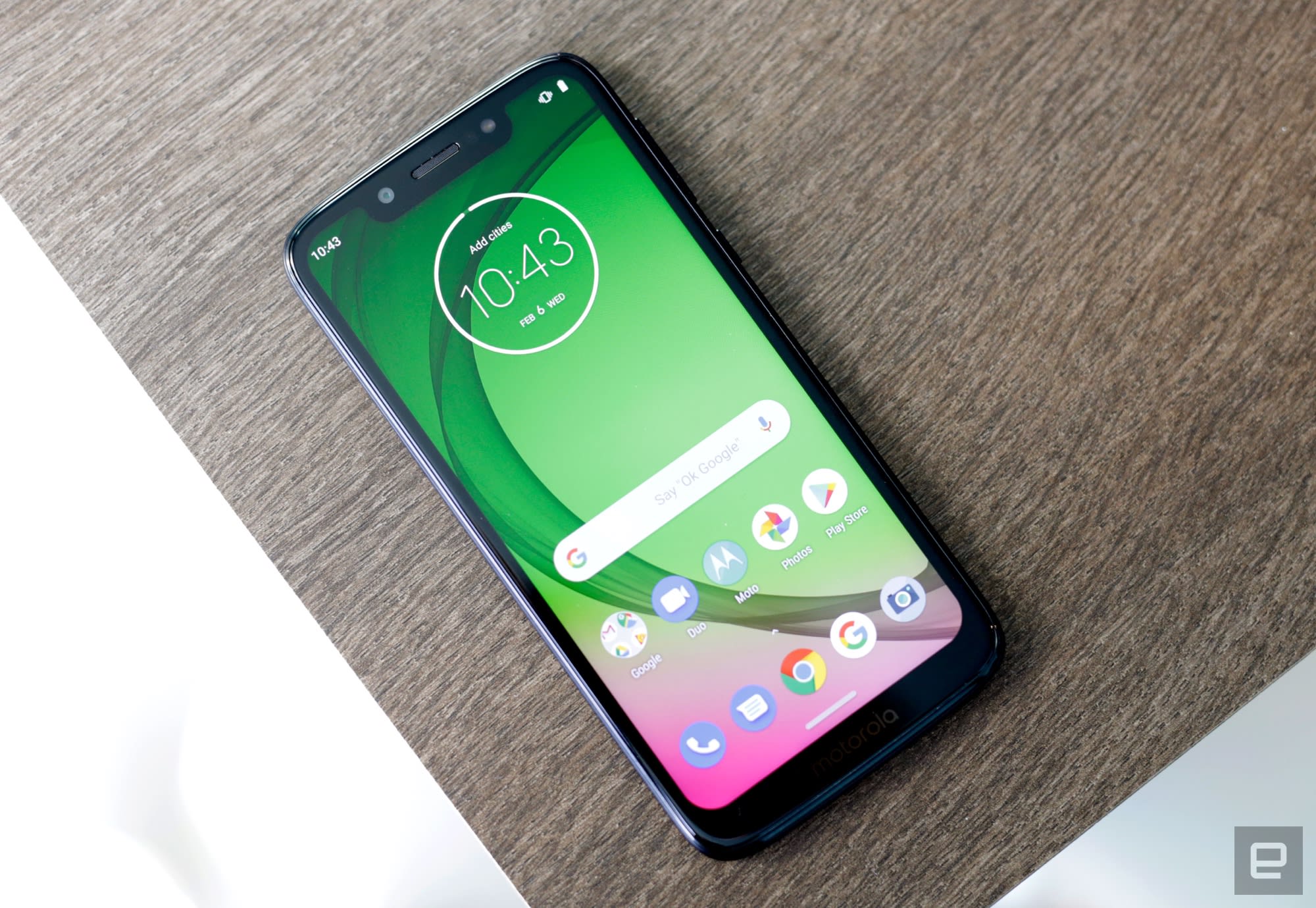 Since it packs the most RAM, it's little surprise that the G7 is the most capable of the phones Moto is bringing to North America. While it didn't run noticeably faster than either of its less expensive siblings, that extra memory will be reason enough for some to splurge on Moto's priciest new G series phone -- it'll just hold up better over time. Motorola also paid special attention to the G7's 12MP+5MP dual camera, fleshing it out with new features and some helpful holdovers from earlier devices. You'll be able to shoot portraits as usual, isolate colors in photos and shoot the same kooky, partially animated Cinemagraphs that Motorola embraced in its Z3 last year.

On paper at least, the most helpful new camera feature here is Motorola's high-resolution zoom, which combines multiple exposures into a single image once you zoom past 2x. In theory, those imaging smarts should make for slightly crisper photos, but I didn't notice much difference while taking test shots on a busy New York street. Motorola says there's a sweet spot between 2x and 4x that should produce the best results, but even then, photos taken within that range still looked pretty muddy. Digital zoom has never been the ideal way to get tight on a subject, and even with new software tricks, it's best avoided whenever possible.

Thankfully, Motorola's auto smile-capture feature works much better. As the name suggests, the camera will automatically snap a photo whenever it detects a smile, and it correctly triggered the shutter almost every time I tried. It's not exactly perfect yet, though: It's great for identifying grins that show teeth, but my timid, awkward, closed-mouth smiles didn't always do the trick. 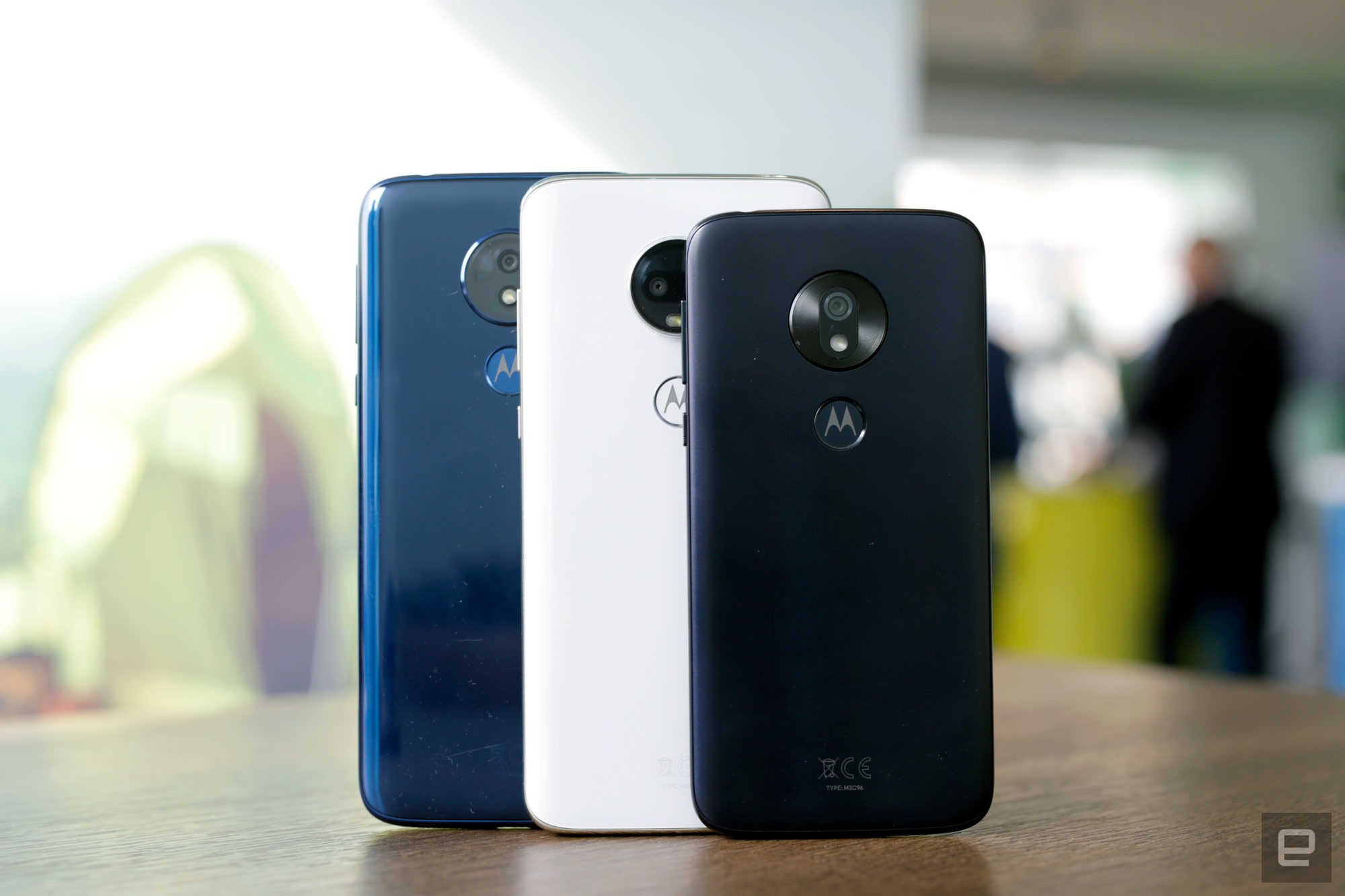 All told, Motorola has done some impressive work here, but I have to wonder whether the company actually needed to introduce three new midrange phones at once. True, each of these devices brings something different to the table. Its solid screen, slight edge in performance and more-flexible camera mean the G7 maintains Motorola's tradition of building midrange phones that feel much better to use than most. The G7 Power's massive battery is sure to win it some fans. And the G7 Play? Well, it's really cheap.

Maybe some more time with these devices will unearth some revelation about usability, but for now at least, the Play seems like a tough sell, especially when the Power only costs $50 more. It almost feels superfluous. Motorola says its plan to expand its G series lineup was based purely on customer feedback, so perhaps it's on the right track after all. If nothing else, though, budget-smartphone shoppers are flush with choice, and it's hard to complain about that.