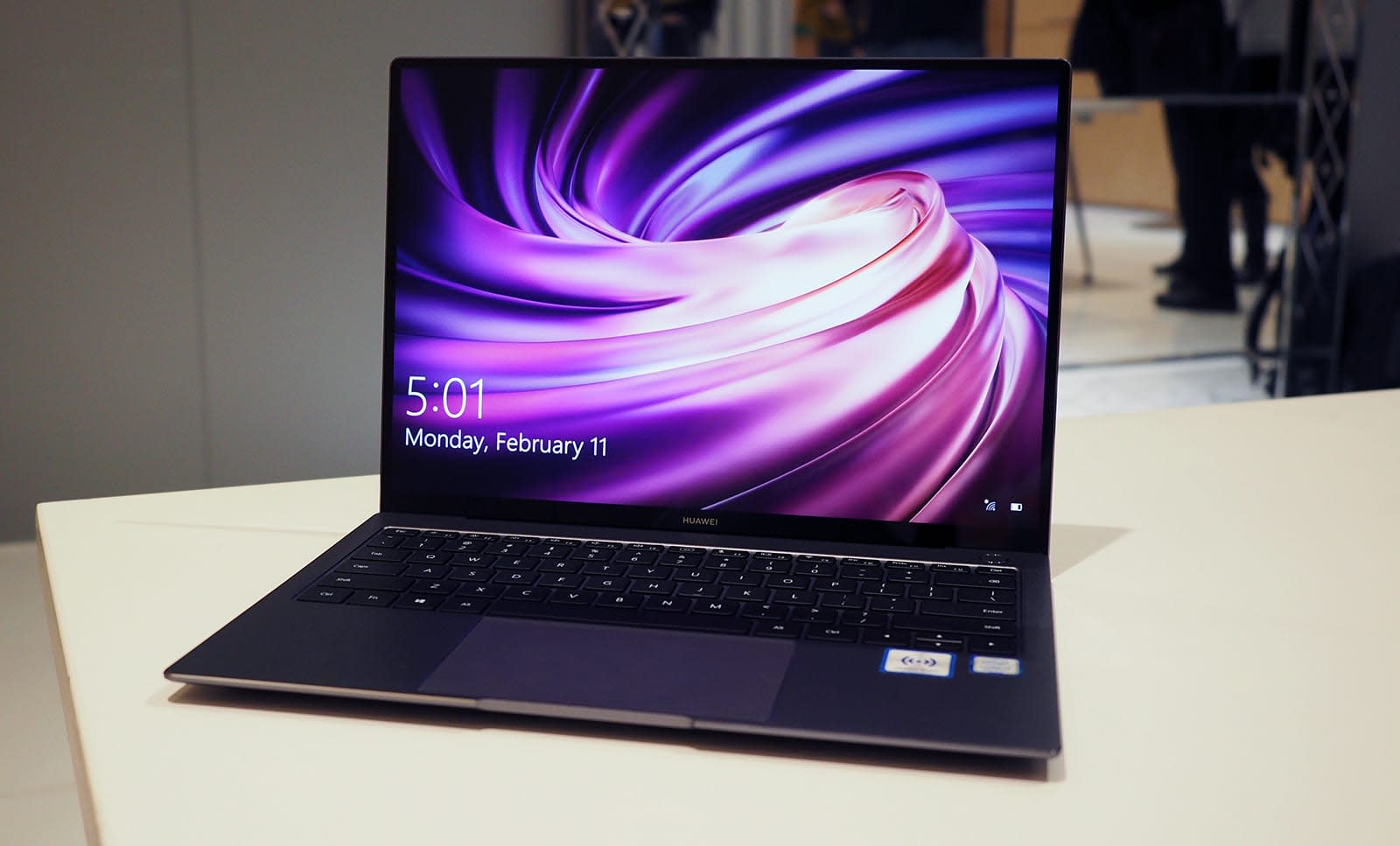 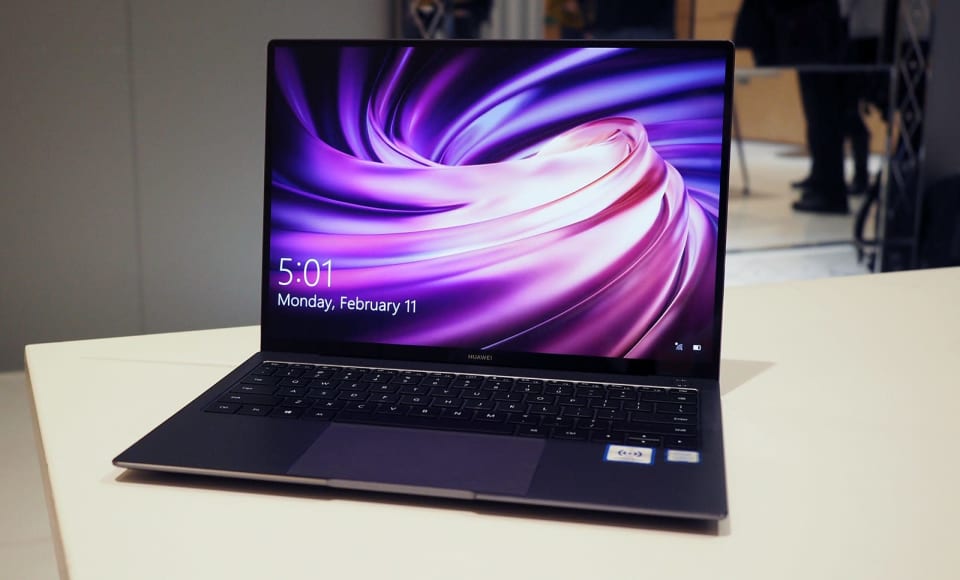 Huawei's Mobile World Congress lineup actually starts with laptops this year. Expect to see at least three MateBooks in 2019, in fact. The company is rounding out of its PC family, but the main draw is the triumphant return of the MateBook X Pro, upgraded for 2019 with up to 8th generation Core i7 processors, up to 16 gigs of RAM and 1TB of storage (double the amount from last year). There's also a GPU upgrade to the NVIDIA GeForce MTX 250, which I'm not going to complain about, either.

Looks-wise, however, it's more of the same. You can take that two ways: Is it inoffensive and classy, or is it derivative and unremarkable? I think there are ugly laptops out there, and this certainly isn't one of them. Huawei has even dropped the awkward floral emblem decal on the back, going for a more restrained (letters-only) "Huawei."

MacBook similarities aside, the MateBook X Pro still differentiates itself with the same taller screen ratio we saw last year, making it better suited for work and scrolling through the web. Yes, this does mean more black borders when you're watching movies, but hey, that's the trade-off. The screen still goes up to 400-nit brightness (that's plenty), and is touch enabled. What about the bezels? The 13.9-inch screen here works out at a 91 percent screen-to-body ratio, meaning that once again, the MateBook X Pro tucks its webcam away inside its keyboard. It's still a cute placement, but your conference calls are likely to be a little... unflattering.

Huawei has added a few of its own software touches to the touchscreen too, simplifying screen grabs to a gesture: slide three fingers down the display. From here, you can easily crop parts of whatever is on screen — pretty slick. Better still, Huawei's OCR feature will glean text from anything it grabs, meaning you can then paste selected text immediately into emails.

That's not the only new trick: The latest Huawei Share 3.0 includes OneHop, where the company's phones and laptops seamlessly connect to share photos, videos and files with a tap. Bringing a phone on top to the NFC-friendly Huawei Share sticker will send files immediately, and the traffic goes both ways. The caveat is in plain sight, though: you'll need to get a Huawei phone and a Huawei laptop to use this feature. I'm not sure it's quite the showstopper that Huawei hopes it would be. 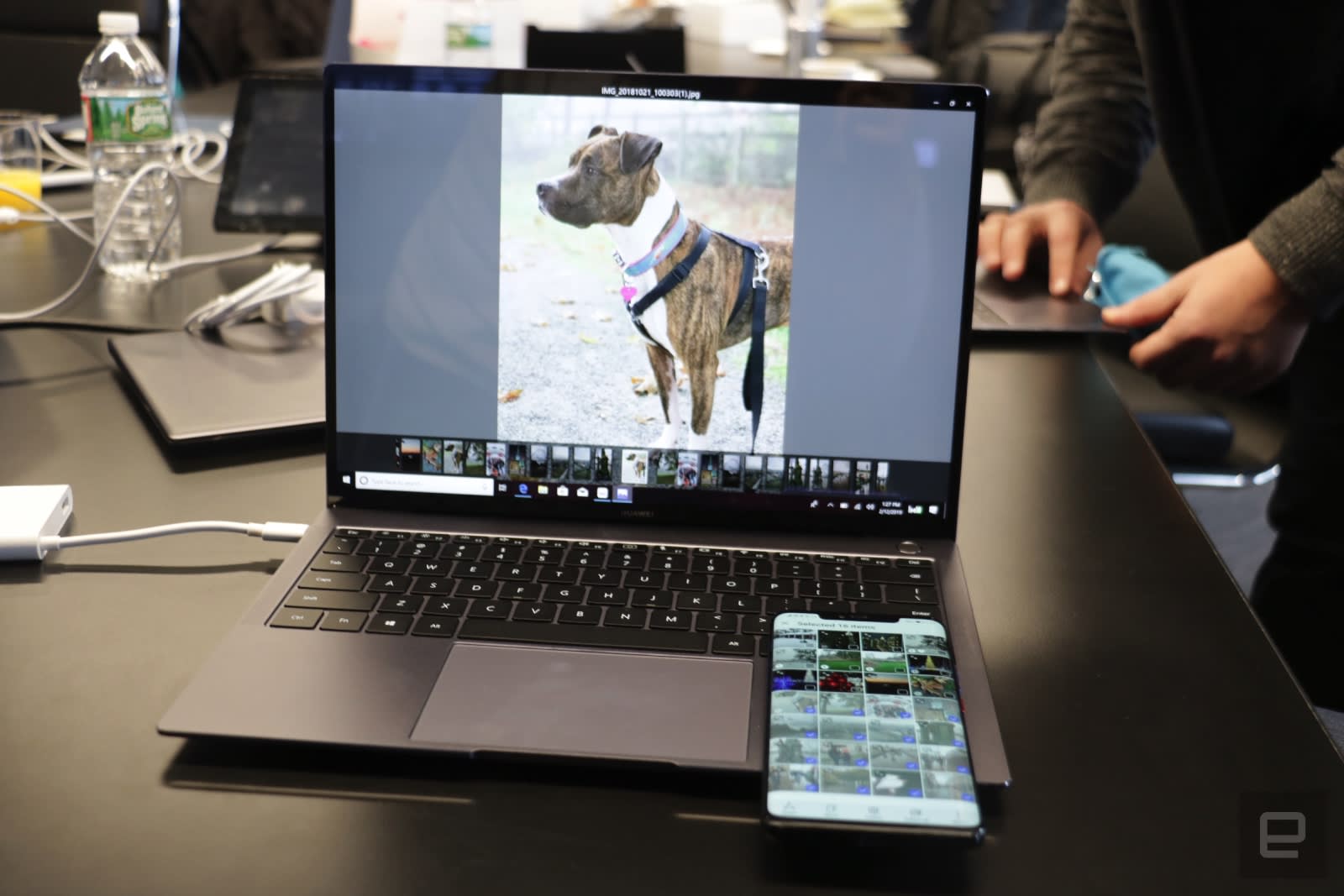 Some of the best parts of the MateBook Pro X are worth repeating. The extra-large touchpad is back, the keyboard is still comfortable and there's a combination of two USB-C ports (one supports Thunderbolt 3 now) with a dongle-friendly old-school USB-A port on the right edge.

This might be the prestige device so far, but it's just the start. The MateBook 14 (that's in addition to the MateBook 13 last month) will be launching alongside the MateBook X Pro. Despite a slightly larger 14-inch display, it's still pretty much all-screen (90 percent screen-to-body ratio) but goes to town on connectivity -- especially for a 2019 laptop. The 14 still has the pop-up camera inside the keyboard but has two old-school USB-A ports alongside a single USB-C socket. There's also an HDMI port, which was a surprise -- and a simple solution for a lot of people that don't want to get mired in dongles and wired display compatibility woes.

The MateBook 14 will come in Space Gray and a lighter-toned Mystic Silver and can be specced out with an 8th generation Core i7 process (8565U), with a discrete GPU option (the same GeForce MX250 that the X Pro houses). Like the MateBook X Pro, there's Dolby Atmos built-in and a fingerprint-reading power button, but in all, the device seems pitched as a more competitively priced laptop compared to the company's flagship PC. The build of the MateBook 14 doesn't look and feel as premium as the MateBook X Pro.

Both devices will arrive sometime in April, according to Huawei, boxed with a 65W charger that will give the laptops three hours of juice after 15 minutes of charging. The MateBook X Pro starts at €1,599 (roughly $1,800), while the MateBook 14 starts at €1,199 (around $1,360) -- which is more expensive than we'd hoped.

In this article: gear, hands-on, huawei, huawei matebook x pro, matebook, matebook 14, matebook x pro, MWC 2019, mwc2019, personal computing, personalcomputing
All products recommended by Engadget are selected by our editorial team, independent of our parent company. Some of our stories include affiliate links. If you buy something through one of these links, we may earn an affiliate commission.