There's something here for (almost) everyone.

As usual, HMD Global has been very busy ahead of MWC. Not only did it build a pleasantly insane five-camera flagship, it also added a slew of mid-range and low-end smartphones. (Oh, and a feature phone follow-up to the Nokia 106 and 230, if that's your thing.)

Despite what its name might suggest, the new Nokia 4.2 is the first 4-series phone in HMD's portfolio, and the company is pushing it as an "affordable flagship" of sorts. Don't get any ideas, though: the 4.2 definitely isn't set to compete with the likes of OnePlus. With its Snapdragon 439 chipset and either 2GB or 3GB of RAM, we're definitely looking at a mid-range machine, though it still runs its near-stock version of Android Pie without much fuss. 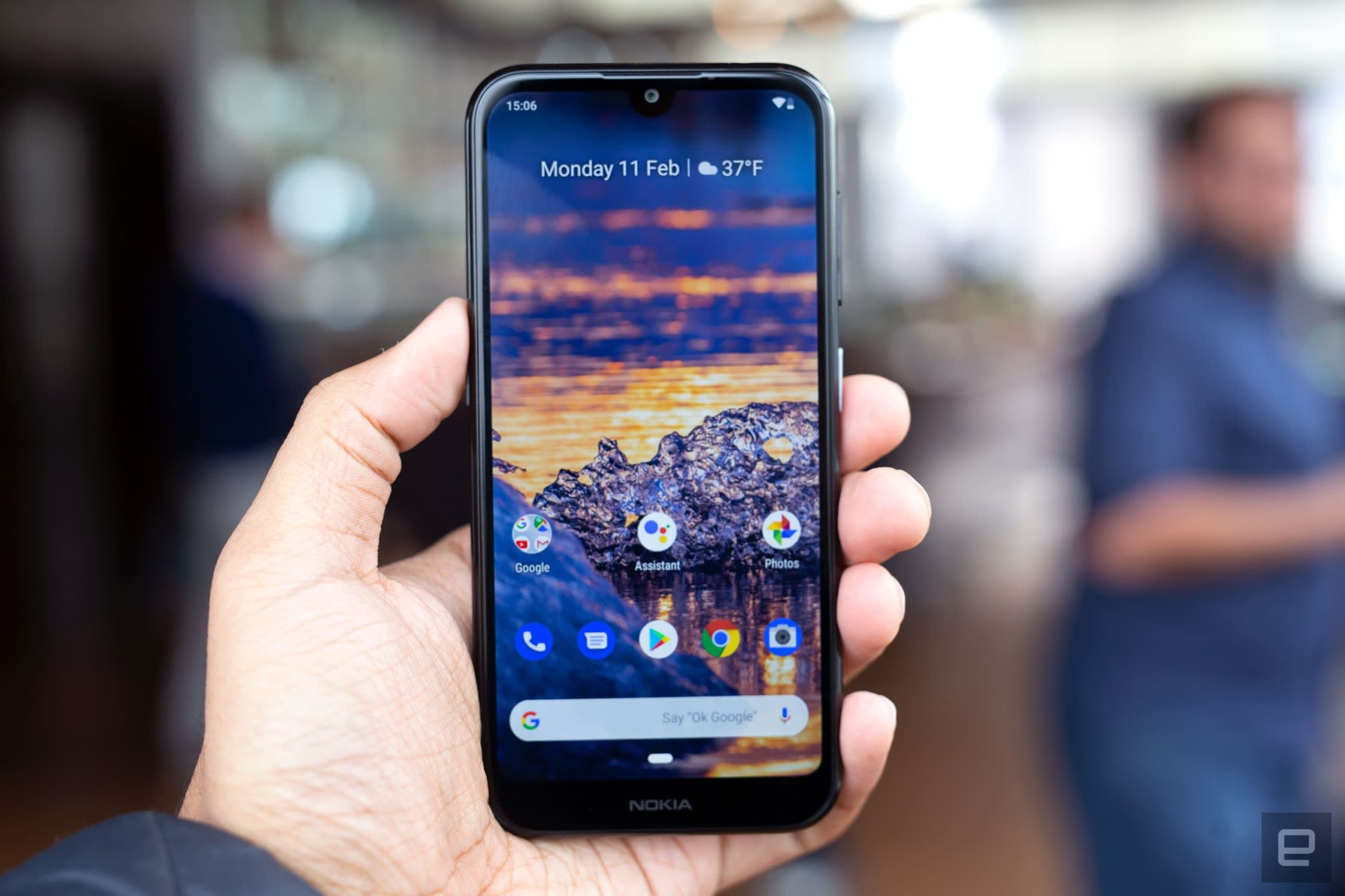 It's pretty compact, too, with a 5.71-inch, 19:9 display running at 1520x720. I really appreciated its sturdy, rounded build after a bit of hands-on time. (For the curious, a die-cast metal core gives provides the underlying structure for the phone's cutesy, polycarbonate body.) It actually kind of feels like a Nokia-designed iPhone, though it's probably fair to say HMD might've taken some inspiration from Google's Pixel family for its millennial-friendly "Pink Sand" color option.

Slightly more impressive is the phone's rear dual camera: a 13-megapixel sensor with an f/2.2 aperture will handle most of your shooting needs, while the additional 2-megapixel camera is mostly just there to allow for some nifty depth effects. Sure, it pales in comparison to what the Nokia 9 PureView offers, but I managed to capture a handful of perfectly pleasant photos — just know that they're better suited to Instagram than printing.

The 3.2, meanwhile, packs a larger 6.26-inch, 19:9 display running at the same 1520x720 as its sibling. In normal use, that screen appears crisp enough, but there's no denying that its lower pixel density becomes apparent upon further scrutiny. Like the 4.2, the 3.2 also runs Android 9.0 Pie, though the slightly older Snapdragon 429 chipset and the 2 or 3GB of RAM paired with it mean the phone didn't handle furious multitasking quite as well.

Still, considering the price (which starts at $139), that's nothing out of the ordinary; you should still be able to play a few rounds of Brawl Stars without a hitch. And if nothing else, people should find some solace in the phone's big battery. There's a 4,000mAh cell tucked away inside, and when taken with that relatively modest screen and processor, we're looking at a device rated for two full days of use off a single charge. 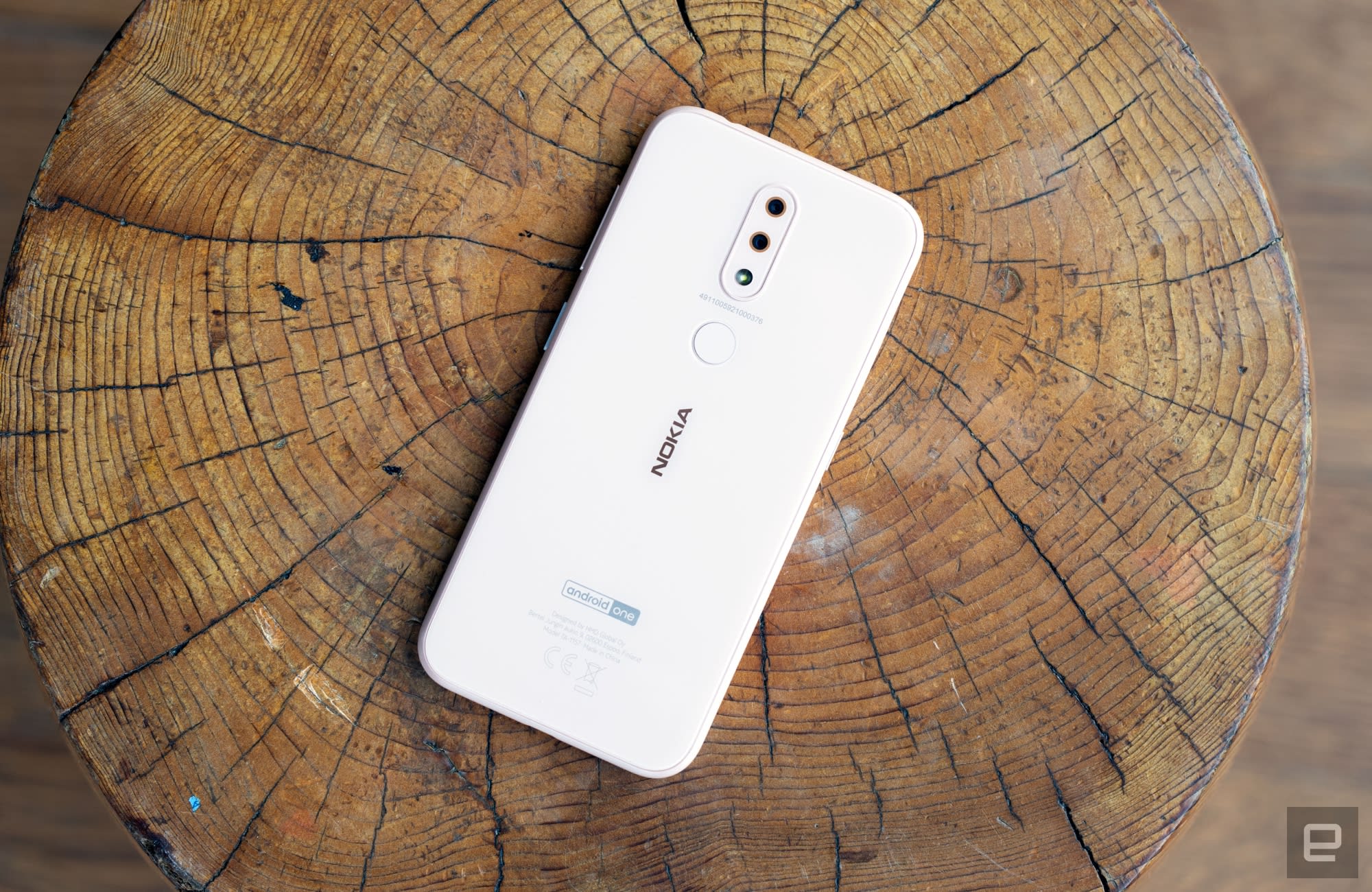 To keep costs down, though, HMD had to compromise on a few things: the 3.2's design and build quality isn't nearly as impressive as the 4.2, and it only packs a single 13-megapixel camera around back. Not everyone Nokia 3.2 owner will get a dedicated fingerprint sensor, either — the $139 model, with 2GB of RAM and 16GB of storage, doesn't have one, but the $169 version (with 3GB of RAM and double the storage) does.

While they cater to pretty distinct sets of users, the 3.2 and 4.2 have more in common beyond their Android One underpinnings. Both phones also pack dedicated Google Assistant buttons on their left sides — it's a flourish we first saw on LG devices, but one that's sure to become more common throughout the year. And no matter how you choose to invoke Google's Assistant, you'll still be able to access the same Nokia-specific commands, like asking the phone to take a "bothie". (That's a photo that combines images from the front and rear cameras, for the uninitiated.) 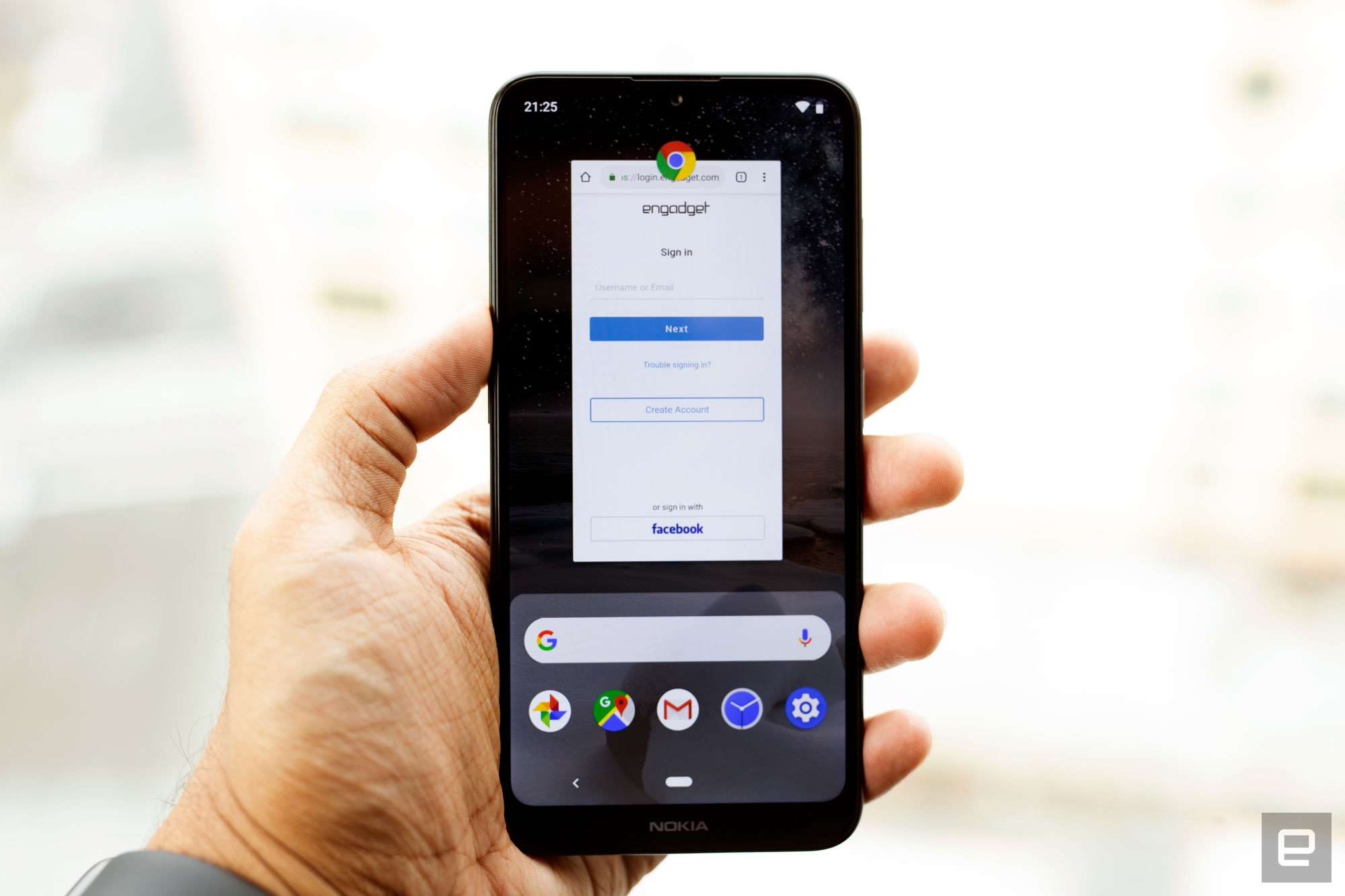 The Nokia 3.2 is a budget-friendly handful.

Both phones also have AI-augmented face unlocking, a feature that, while seemingly helpful, went largely unexplained by HMD. Oh, and the power buttons on both devices also have notification LEDs built into them — they apparently "breathe" rather than blink when alerts roll in, just because.

For those on tighter budgets, there's also an updated version of last year's Nokia 1 called the Nokia 1 Plus. It's an Android 9 Go device, which should tell you everything you need to know about the level of power we're working with here — there's a quad-core MediaTek chipset clocked at 1.5GHz inside, along with 1GB of RAM and either 8 or 16GB of storage. Curiously, the best version of the phone — also known as the one with a microSD slot — will only be available in Latin America. Rounding out the package is a passable 8-megapixel rear camera, a 5-megapixel front-facer, a headphone jack, and a relatively modest 2,500mAh battery.

Surprisingly, the best thing the Nokia 1 Plus has going for it is its design. Rather than stick with the slick polycarbonate we saw in last year's model, HMD went with a grippier, textured finish that looks great in red. And despite the fact that this thing should only cost you $100, there's a half-decent 5.45-inch, 18:9 display here. That's not bad, especially considering the 1 Plus is tailor-made for developing markets. 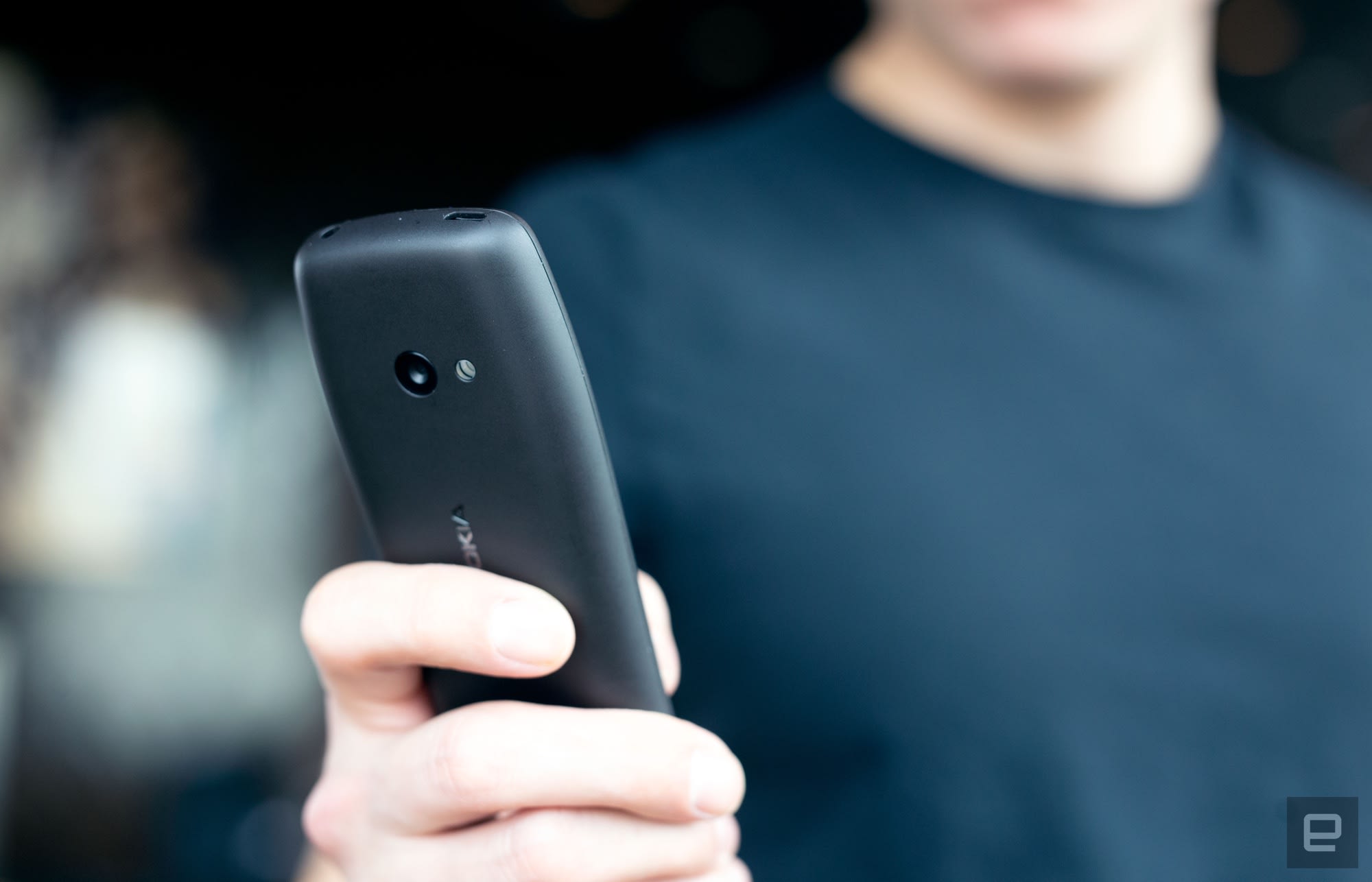 Oh, and that new feature phone? Meet the Nokia 210. HMD says that, at $35, it's the company's cheapest internet-connected device. It also happens to have insane battery life — think weeks on a single charge — though that's to be expected considering the little this dual-SIM phone can realistically deal with.

After all, the 210 runs HMD's in-house dumbphone OS rather than the more impressive (and feature-rich) KaiOS. Still, those are weeks you can spend playing Snake and poking around inside a limited Facebook app without having to worry about plugging your phone in. That definitely counts for something in my book.

All products recommended by Engadget are selected by our editorial team, independent of our parent company. Some of our stories include affiliate links. If you buy something through one of these links, we may earn an affiliate commission. All prices are correct at the time of publishing.
Nokia’s new budget phones promise clean Android for all
android one
gear
hands-on
hmd global
mobile
mwc2019
nokia
nokia 1
nokia 1 plus
nokia 210
nokia 3
nokia 3.2
nokia 4
nokia 4.2