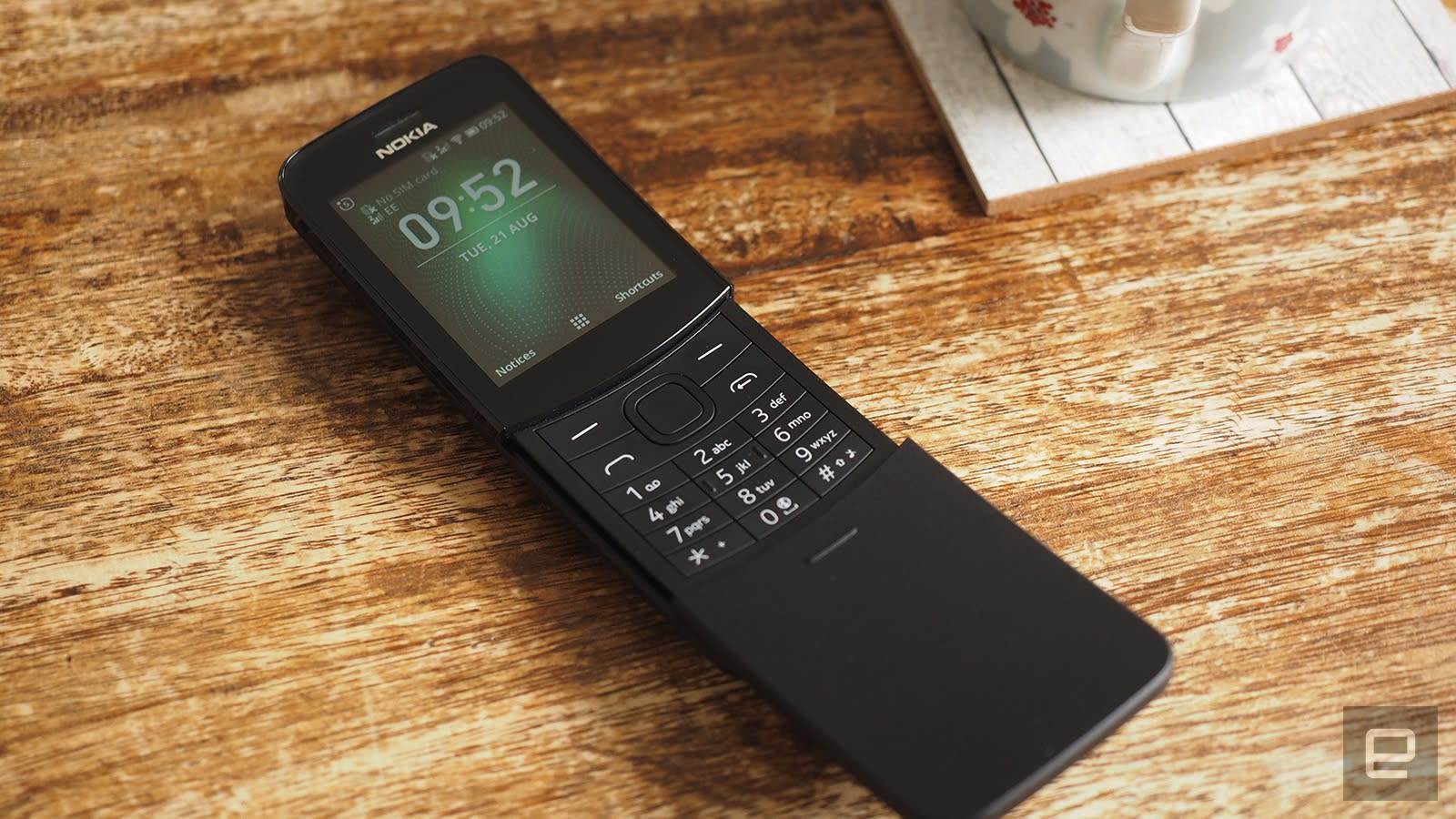 Thanks to KaiOS and several Google services.

HMD Global did something special at last year's Mobile World Congress, stealing the show with... a feature phone. By making ingenious use of the Nokia name, having snapped that up the previous year, it 'relaunched' the Nokia 3310. The internet swelled with a nostalgia-driven fervor as HMD put on a masterclass in brand awareness. As expected, the company returned to the mobile show this year with another retro handset in tow, and for some reason waited six months to put it on sale. But the Nokia 8110 4G, aka the "banana phone," is now here, and it's not just another marketing exercise. Thanks to a jump in software, it's not your typical feature phone. But it's not quite a smartphone, either. Instead, it's something in between.

People didn't really seem to care much when it was announced, but the relaunched Nokia 3310 only bore a passing resemblance to the original. It was more a modern reimagining of the turn-of-the-century icon than a true relaunch. The same is true of the Nokia 8110 4G, but that's a good thing. The 8110 came to market in 1996, complete with chunky body, small monochrome screen and protruding aerial. Naturally, the new 8110 is more refined. It's still a thick candy bar with a sliding cover that's used to answer and hang up calls -- alas, however, it's not spring-loaded like the special model featured prominently in the first Matrix movie.

From The Matrix (Warner Bros.)

It also retains the curved body of the original 8110, which earned it the nickname "banana phone." Not to miss a trick, HMD has nodded to this old handle by releasing the new version in a garish bright yellow, as well as the more reserved matte-black option. It's on the larger end of the feature-phone spectrum, with a robust build quality that'll always be associated with the Nokia brand. You also get a removable battery that HMD says will last several days without crying for an outlet, or up to 25 days in standby.

There are a few modern amenities too: A 2-megapixel camera with flash, a color display, four gigs of internal storage and a microSD slot. These aren't outlandish for a feature phone, though, and well... we've seen this trick before. The company already pushed our nostalgia buttons to the point of numbness with the 3110, but the new 8110 serves as sort of a feature-phone benchmark. It's not your standard dumb device. HMD can't really take the credit, however. In this instance, it's KaiOS that's responsible for what's happening behind the scenes. Though it may look basically the same as the software on other Nokia feature phones, behind that familiar skin is a much more capable backbone.

I disagree with the notion you can pick up a bare-bones Nokia to disconnect from the chaos of connective life. The concept of the digital detox has always seemed disingenuous to me. It's a phrase usually uttered by tech journalists who would never attempt such a thing, and if you genuinely want a break from the daily onslaught of notifications and social feeds, you can do that without buying a more limited device. I can, though, understand why someone might want to keep an emergency phone with long battery life in their glove box, and the new 8110 offers a few useful features that go beyond basic calling/texting functionality. These give it legitimate potential as a backup phone but will be significantly more important to people in countries where feature phones are still the way many stay connected.

Sometimes it's the little things that are the biggest conveniences, like being able to import your contact list from a Google or Outlook account. It was such a nightmare trying to get my cloud contacts on the 3310 that I gave up, and yet it took me all of 30 seconds on the 8110. It was extra speedy since I'd already connected my Gmail through the phone's email client five minutes earlier. It's a basic client -- it doesn't know what to do with PDF attachments, for instance -- but it works all the same. Syncing my calendar was a tad convoluted as I had to jump on my laptop and flip a switch to allow "less secure apps" to access my data, but all in all, I spent about ten minutes total linking all the essential services.

Other basic apps include a browser, voice-note recorder, calculator, music player, FM radio and Gameloft's bastardization of Snake, alongside several pre-installed demos of other games from the developer. I couldn't get my Mac to recognize the 8110 as an external USB storage device, but pairing via Bluetooth and transferring mp3s that way worked without issue. You get GPS, WiFi and 4G, too, the latter being particularly useful because you can turn the phone into a mobile hotspot and let other devices ride that connection. The big difference between the 8110 and previous Nokia feature phones, though, and the reason it encroaches on smartphone territory, is that several Google services come baked-in -- Google has been working relatively closely with KaiOS after investing $22 million in the platform a few months ago. Beyond the ability to easily import your contacts and link your calendar, you get YouTube, which is basically a web app shortcut that loads in the browser, and a Google app, which opens the browser with the search bar front and center. But the highlights are, for sure, Maps and the Assistant.

Maps is a little slower to use with scroll keys and a 2.45-inch display, but it's the full package. You can see traffic info and satellite imagery; get directions for driving, cycling, walking or a public transport route; search for nearby restaurants or shops; read reviews and check opening times, etc. Maps, too, syncs with your Google account, so all your favorite spots are highlighted as they should be. The Assistant is similarly impressive considering the hardware it's working with. It's by no means the complete experience, but the stripped-down version isn't too dissimilar from the Android Go build. And it isn't always listening on the 8110 -- you have to open up the Assistant app first. That said, it's surprisingly fast at processing voice commands and speaking back to you. The Assistant can send texts or call anyone in your contacts. It'll answer your questions about the weather, store opening times and nearby eateries, do calculations on your behalf and translate phrases into other languages. It'll even do some of the quirkier stuff, like tell you jokes.

The Assistant isn't as integrated with other apps as it is on smartphones, but there's some basic cross-communication with YouTube. While it can't set an alarm for you or dictate your calendar appointments for the day, you can ask it to play a song, and it'll hand you over to the YouTube app and automatically search for what you requested. KaiOS should keep getting better in the future, too. While Twitter's the only notable name in its app store at the moment, rumors signal to the imminent addition of Facebook and WhatsApp. Facebook is already available on the JioPhone and Jiophone 2 from Indian carrier Reliance Jio, WhatsApp is due any day now, and both of these devices run KaiOS. I was told Reliance Jio control the app stores on their devices, and while KaiOS representatives wouldn't say any more on it, no doubt it's only a matter of time before the services become platform-wide.

But therein might lie a bit of a problem. Ignoring the west and taking India as an example market, the full QWERTY JioPhone 2 has just gone on sale there for 2,999 rupees (roughly $43). The Nokia 8110 4G recently started trickling out to more than 100 countries -- there are no plans to bring it to the US at this point, by the way -- for a global average price of €79 (nearly $90), with a little bit of variation depending on local taxes, etc. That converts to around 6,300 rupees, more than twice the price of the JioPhone 2, though HMD might revise that slightly for the official launch.

Even in the UK, the device is priced at £70, and you can get a smartphone at Carphone Warehouse for £50ish. A crappy smartphone, admittedly, but still one that has a touchscreen, Android and full access to the Google Play store. With that in mind, the new Nokia 8110 4G is unlikely to be your next daily driver, but it's a more realistic backup. Thanks to KaiOS, it's a lot more capable than your standard dumb phone, but whether it's worth paying HMD's nostalgia tax is another matter.

All products recommended by Engadget are selected by our editorial team, independent of our parent company. Some of our stories include affiliate links. If you buy something through one of these links, we may earn an affiliate commission. All prices are correct at the time of publishing.
View All Comments
The Nokia 8110 4G is smarter than your average dumb phone