If you're a geek of a certain age, you probably had some kind of phone with a physical keyboard. For me, it was the BlackBerry Tour. For my younger sister, it was the magnificently chunky Motorola CLIQ. And for F(x)tec co-founder Liangchen Chen, it was the Nokia N900.

His undying fondness for that aging smartphone's keyboard meant he clung to it for longer than he probably should have, and it eventually led him to try his hand at building a failed QWERTY keyboard mod for Moto Z-series smartphones. Once that venture tanked, though, Chen linked up with future co-founders Adrian Ching and Leon Feng to build the modern, QWERTY-packing smartphone they always wanted to use. Meet the $649 F(x)tec Pro 1.

Yes, you're right: that name is pretty ridiculous. It's only fitting that the phone is too, in a charming, retro sort of way. See, the Pro 1 is spiritual successor to the Droids and the HTCs with full keyboards that were eventually made extinct by sleek, dark, glass-and-metal slabs.

The difference is, it's significantly more powerful than any of those devices ever were: there's one of Qualcomm's older Snapdragon 835 chipsets inside, along with 6GB of RAM, 128GB of internal storage, a 12-megapixel main camera and a 3,200mAh battery. (And since this phone is such a throwback, it also has a headphone jack.) You're not exactly getting full-on, 2019 flagship performance, but the startup believes there's still more than enough power here to please all those people who long for the days of precision texting. 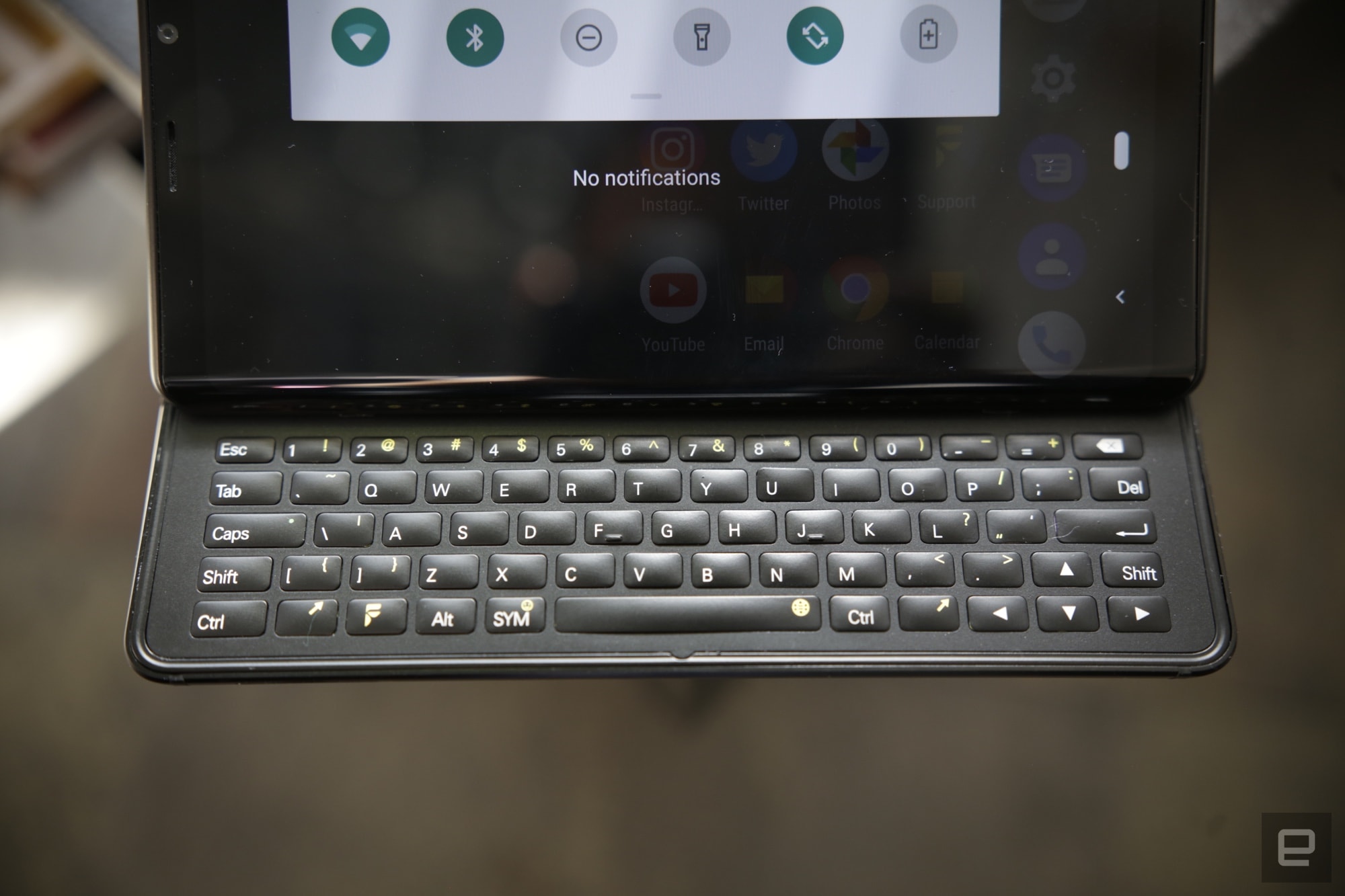 To F(x)tec's credit, this keyboard really is great. After the keyboard Moto mod's followers walked away unsatisfied with its grid-like key layout, Chen went back to the drawing board — literally — and designed the comfortable, staggered five-row affair you see here. If you've long since acclimated to pecking out messages on glass, getting used to this physical keyboard is going to take a while. My right thumb got a little worn out after a few minutes of furious typing because it had to stretch a long way across the keyboard. (What can I say? Touchscreens have spoiled me.) I was more than happy to power through, though, because each reassuring click of a key reminded me of simpler days.

Sadly, the Pro 1 I got to try out was a prototype, and it's still a long way from being ready for actual humans. I hardly had any qualms with the phone's 5.99-inch AMOLED screen — it runs at Full HD+ and reproduces colors nicely and everything. The lightly tweaked build of Android 9 Pie that appears on that screen, meanwhile, left me with more questions than answers. When held like a traditional smartphone, the Pro 1 generally runs as well as you'd expect it to. 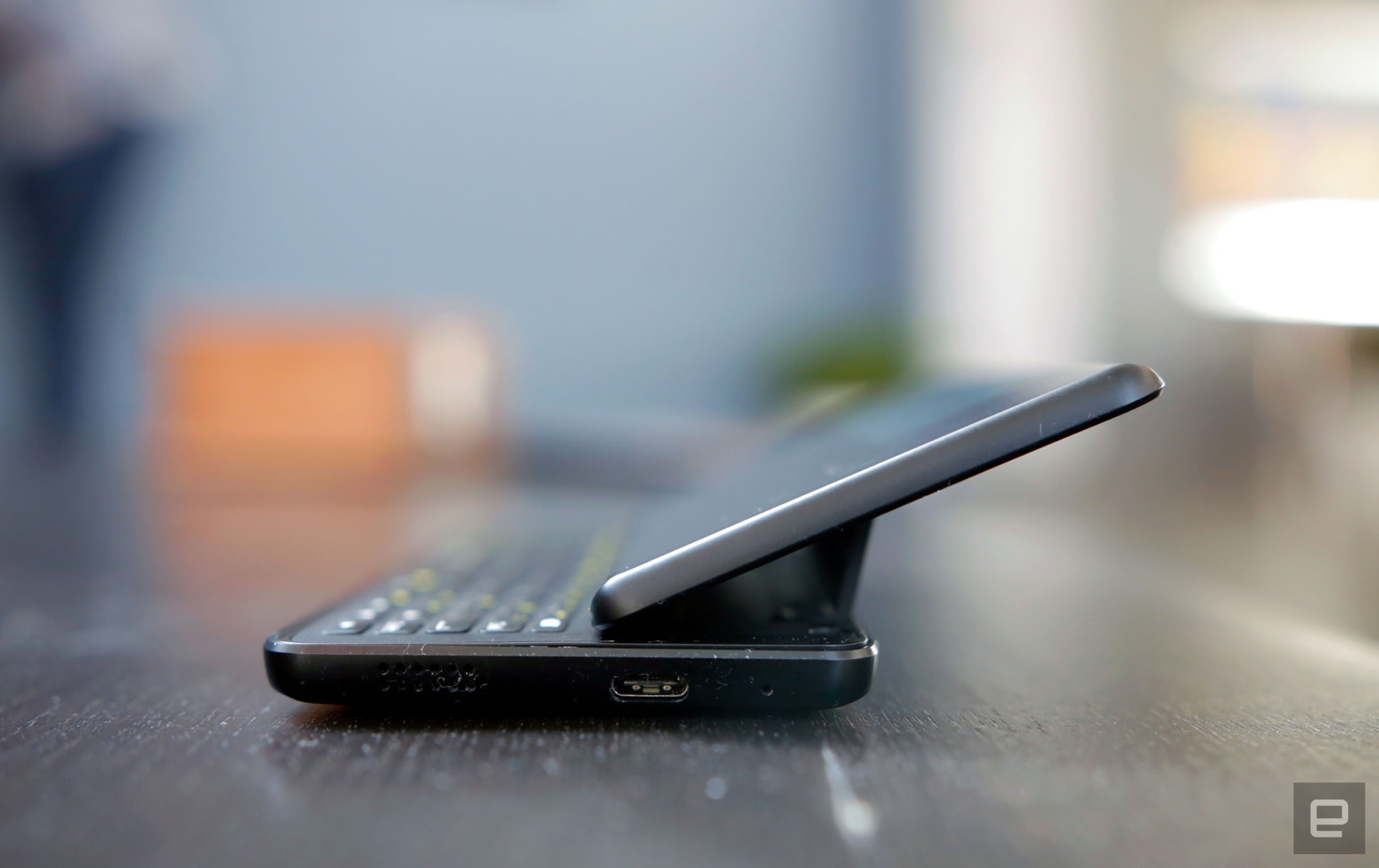 The problem is, not all apps are meant to be viewed in landscape mode, so for now the phone doesn't actually know how to display them. (Instagram might be the most popular example of a vertical-only app layout.) The end result is a bit of a mess, but F(x)tec says it plans to improve compatibility for the most popular portrait-only apps. I'm not too worried all this, though: the team has months to fix the software before these devices officially go on sale.

What's a little more concerning is that this startup is focusing on an incredibly narrow niche (albeit one that's full of die-hard fans). Then again, this isn't the first time we've heard this kind of story. The best option for an Android phone with a QWERTY keyboard right now is the BlackBerry Key2, a device that enjoys more popular than even parent company TCL expected. Maybe, just maybe the Pro 1 is the right smartphone for the right niche at the right time. We'll have to wait and see, though — as nostalgically fun as this phone is to use sometimes, the team still has a lot of work to do.