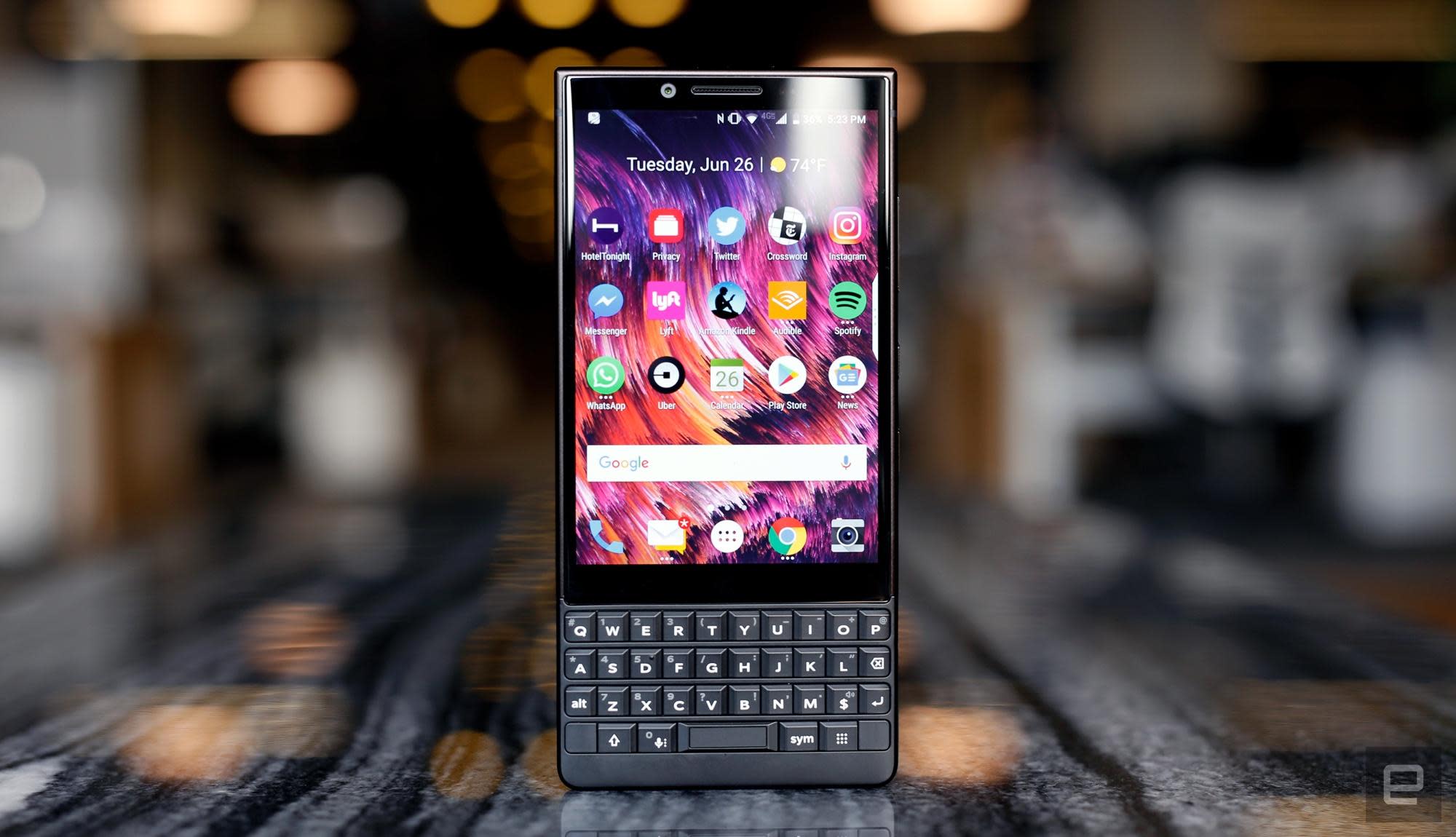 This is the best Android-powered BlackBerry, if that means anything to you.

Last year's BlackBerry KEYone was a something of a surprise: It brought Android to the classic BlackBerry form factor in a way that felt valuable. Sure, it was mostly a love letter to the brand's die-hards -- it also proved that physical keyboards weren't out of mileage just yet. This year's KEY2 is even better. If you were never a BlackBerry person, you won't find much here to change your mind. But if on some level, you still long for the days when great physical keyboards reigned supreme, your smartphone search ends here.

I've already gone off about how handsome I think the BlackBerry KEY2 is -- it's sleeker and more angular than last year's KEYone, and it comes off as more premium and professional as a result. (You deserve as much if you're going to buy a $650 phone.) It's gorgeous, and a surprising number of Engadget staffers agree. Beyond that, TCL and BlackBerry Mobile stuck pretty close to last year's formula: There's a USB-C on the bottom for charging, a 3.5mm headphone jack on top and a 4.5-inch 3:2 LCD screen in between. As far as I can tell, the KEY2 uses the exact same display as the KEYone. Which is to say, it's... adequate? It's bright enough to be readable in all but the sunniest conditions, and colors -- while slightly washed out -- are satisfying.

Some changes are worth more than others, though. This year, all of the phone's physical controls -- the volume rocker, the power button and the convenience key -- are all on the same side. Needless to say, things can get confusing. After two weeks, I still blindly press the convenience key when I want to wake the KEY2. (The power button has a knurled finish, so maybe this is just a dumb-me problem.) More importantly, the KEY2 runs noticeably faster than the KEYone, courtesy of Qualcomm's Snapdragon 660 chipset and 6GB of RAM. I'd still recommend something with a bit more horsepower if you're trying to play some Fortnite, but if you're considering buying a BlackBerry in the first place, gaming probably doesn't rank very high on your list of priorities. That said, hardly anything I put this mid-range machine through over the past two weeks threw it for a loop -- there's more than enough power here for some furious multitasking.

Speaking of power, let's just get this out of the way: The KEY2's 3,500mAh battery has been excellent so far -- the fact that it's paired with a mid-range chipset and a 1620x1080 screen certainly helps. The KEY2 has routinely seen me through two full work days before needing a charge. That longevity isn't as impressive as what you'd get out of old-school BlackBerrys, but it's downright stunning these days. 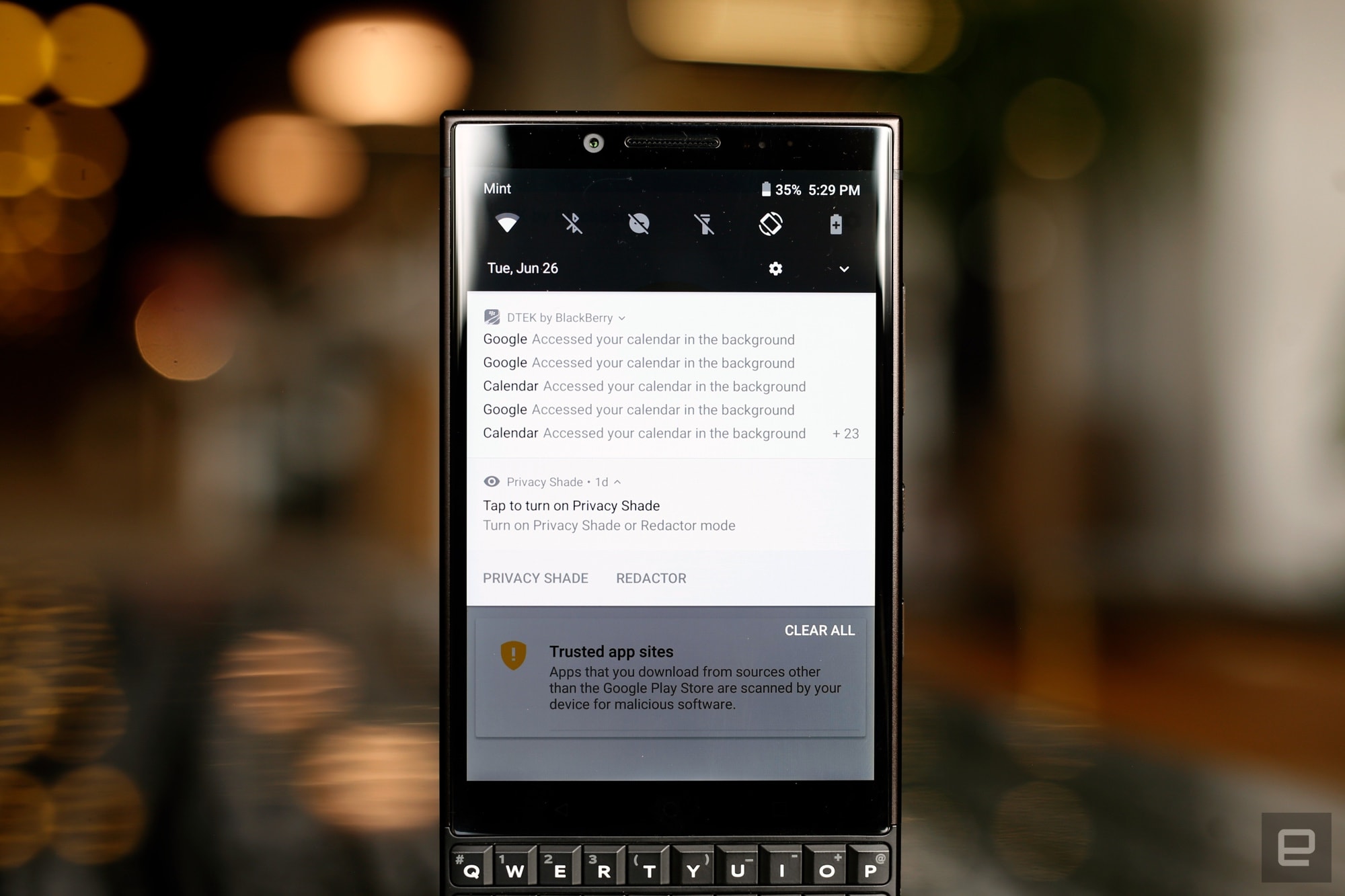 The KEY2 ships with Android 8.1 Oreo, but TCL and BlackBerry Mobile fleshed it out with a few security and privacy-focused features. Just look at the DTEK app — it's been part of the BlackBerry formula since the Priv days and has become more proactive about letting you know when apps try to access sensors on your phone. After all, not everything you download needs full access to your phone's hardware. And who among us hasn't breezed through app permission prompts after installing something?

It can be tricky to find the right balance between being notified and not, however -- for a time, my review unit basically wouldn't stop vibrating. (Google's services are especially data hungry.) Once you can define what sensors you want to get notifications for, they start to feel really helpful.

BlackBerry's Locker app has also improved significantly. It used to be that you could only use it to hide files from prying eyes, but apps are fair game now, too, -- you can even hide them from the launcher completely if you're especially paranoid. You'll need to use either your PIN or the fingerprint sensor in the space bar to access data saved in the Locker. And while it's not quite as nuanced as the Secure Folder feature on Samsung devices, it's still plenty valuable. Throw in apps that let you securely store passwords and redact documents (!), and you're left with a phone that takes privacy more seriously than most. 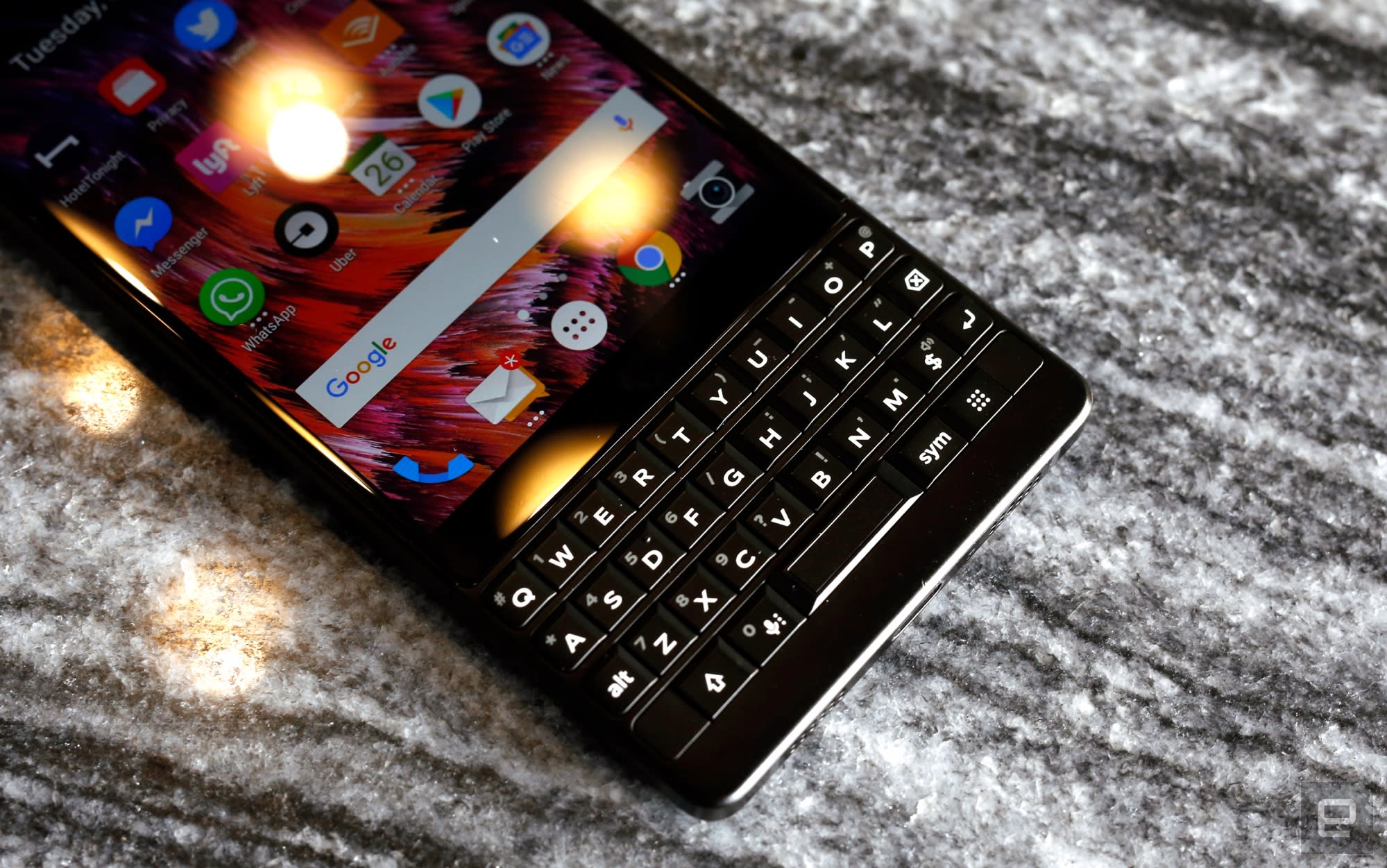 Life with a real keyboard

It's a longstanding tradition around here that when a new BlackBerry shows up, we try to write our full review on the thing. The last time someone actually pulled it off was when the BlackBerry Passport was released in 2014. Now, I won't pretend I wrote this entire thing on a smartphone -- it would've taken too much time -- but I did jot down around half of it on the KEY2. It was much less of a hassle than one might think.

If you ever used the original KEYone, you'll remember the keyboard's scalloped, glossy buttons. They looked great, but the slick finish made it difficult to type quickly. This year, TCL and BlackBerry Mobile went with flatter, matte keys that are about 20 percent larger than last year's. It's much easier to use for long stretches.

BlackBerry Mobile really, really cares about making it convenient to sling words around, so they've embraced some more intelligent ways to type. As usual, the keyboard itself is touch sensitive, and you can use it to scroll down web pages and swipe up to select appropriate word suggestions. That latter feature is what helped me write as much of this review on a phone as I did. But, the sort of short swipes needed to select a suggestion feels unnatural at first. Curiously, you can also try swiping your fingers between multiple keys on the physical keyboard to spell out words, sort of like you can with apps like SwiftKey. It doesn't actually work very well, but it's there if you're feeling brave. There's a new Speed key, too, which lets you access all of your keyboard shortcuts inside other apps. (On the KEYone, you had to exit whatever you were doing to activate those shortcuts.) This is the first new button BlackBerry has added to the keyboard in years, and it makes multitasking lightning fast -- just hold down the Speed key and hit the shortcut button you need. If you really wanted to, you could assign two shortcuts to each of the KEY2's letter buttons -- one for a short press and one for a longer press. That makes for 52 possible shortcuts. It's very clever, and I'm a little concerned the KEY2 has spoiled me forever.

My only real bone to pick with the keyboard is the space bar. At least on our review unit, it feels a little too wobbly.

Now, here's the big question: Could I swear off touchscreen typing and live with this physical keyboard? Sure, and I've thought about it a few times while writing this review. For me at least, typing on a physical keyboard just isn't as fast as blasting out messages with an on-screen keyboard with decent word correction. It would take me ages to retrain my muscle memory. 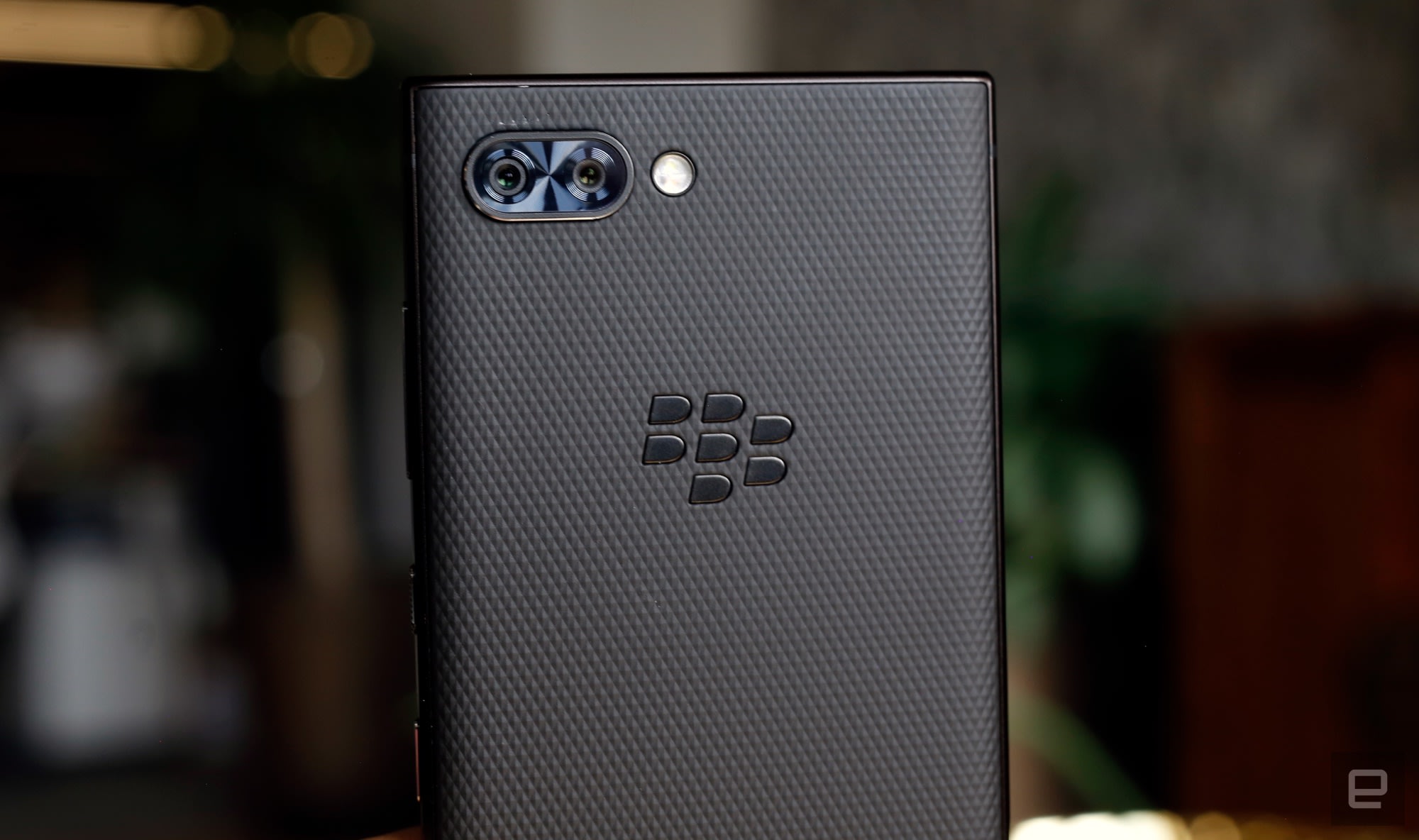 BlackBerrys have never really been known for stellar image quality, so last year's KEYone was a sort of a revelation: It used the exact same sensor as the original Google Pixels. Sure, the KEYone lacked the back-end intelligence that helps make the Pixel photos look as good as they do, but it was a step in the right direction. This year, TCL and BlackBerry Mobile jumped on the bandwagon with a dual camera. 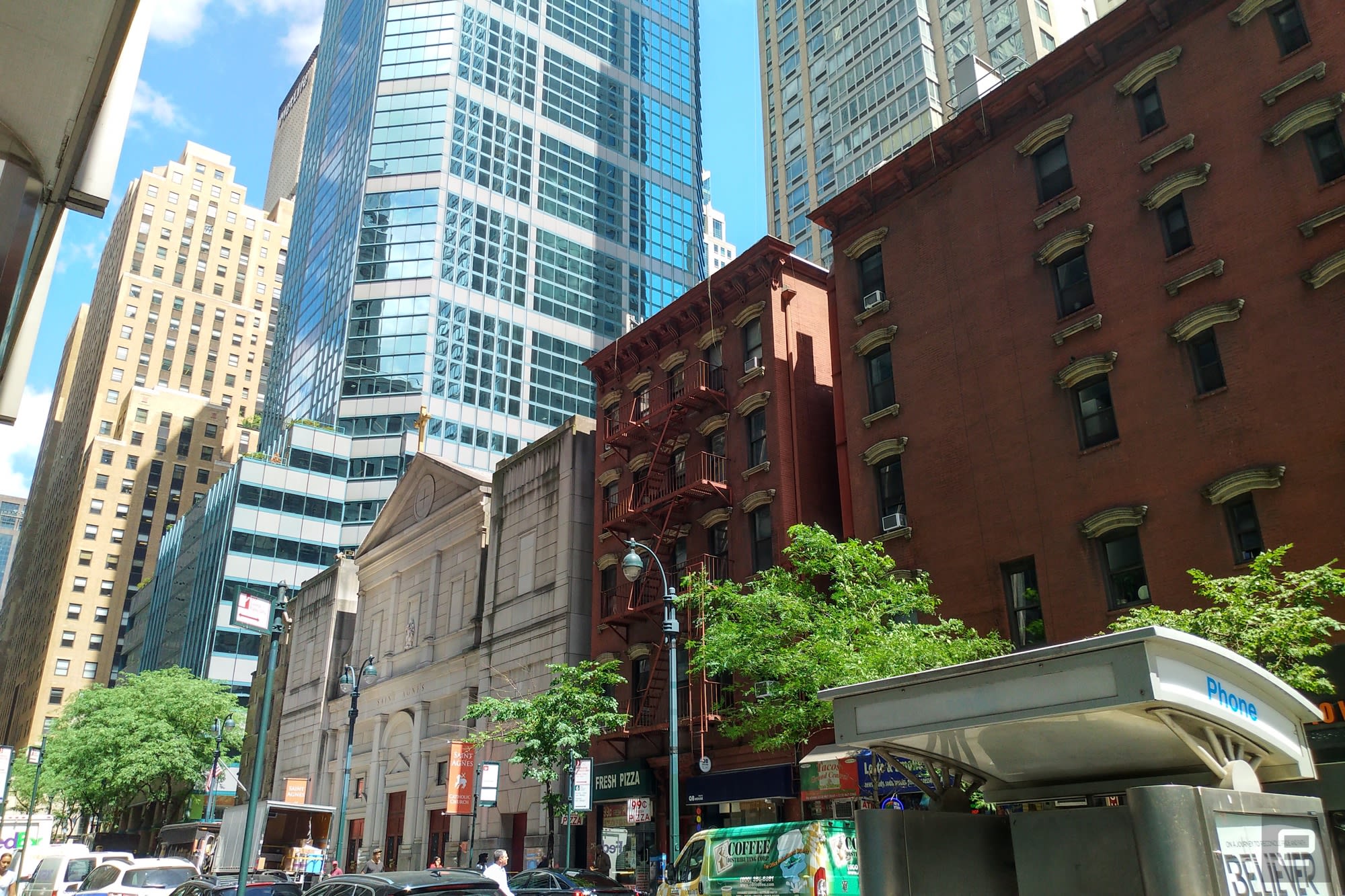 That second sensor is mostly there for when you want to zoom in on your subjects (up to 2x optical or 4x digital) or pop off a few bokeh-filled portraits. As long as you have enough light, the KEY2's portraits are actually quite nice -- they're full of detail, and while they don't exhibit as much bokeh as other cameras we've tested, the phone does a good job of keeping faces in proper focus. Photos taken with that zoom camera generally aren't as good as shots captured from the main one, though, and it can be especially lousy in low light.

Actually, let me rephrase that: The whole camera system can be lousy in low light. More often than not, the KEY2 manages to do alright -- lots of my photos taken in bars and similarly dark environs retained a solid level of detail and weren't overly noisy. Other times, though, the KEY2 had serious trouble focusing in dark spaces, leading to photos with few (if any) discernible edges. The inconsistency on display here makes it hard to recommend to people who care a lot about taking good photos. Beyond that, a lack of controls -- there's no pro mode and just a smattering of photo filters -- means there's little for smartphone photographers to dig into. TCL and BlackBerry Mobile probably would've been better off with one very good sensor than this hit-or-miss dual camera setup. Then again, it's a BlackBerry -- were you really expecting unabashedly great photos? 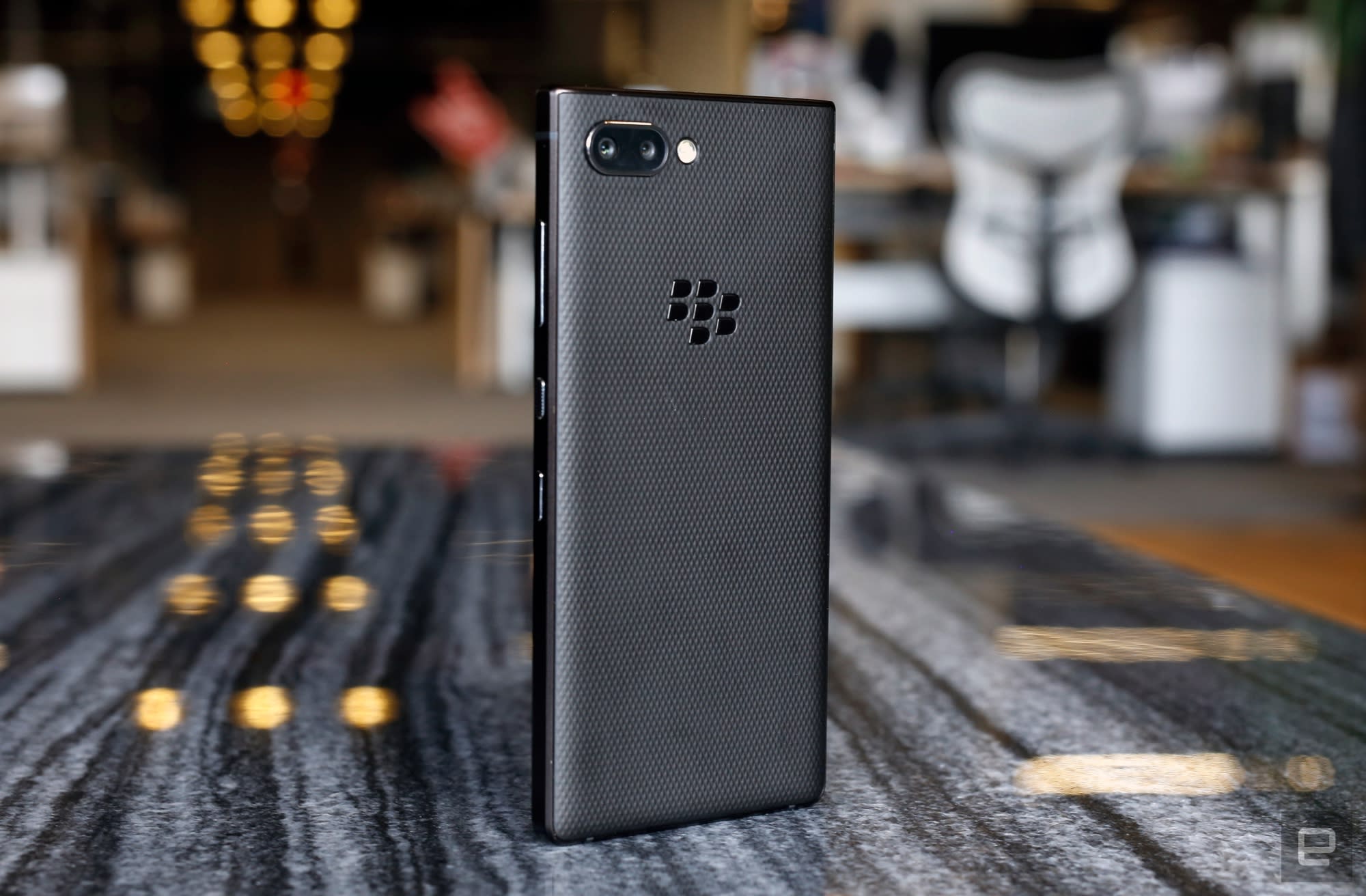 It might sound like I'm damning the phone with faint praise, but whatever: The BlackBerry KEY2 is the best Android-powered BlackBerry ever made, and it improves on last year's formula in almost every way. That said, the KEY2 remains a questionable option for most smartphone shoppers -- you could get a more-powerful Android phone like the OnePlus 6 for less money, and I suspect most people have moved on from physical keyboards without looking back. That said, for the right people -- people who long for tactile keys and data privacy -- the KEY2 just might be the right device at the right time.