And it isn't coming to the US.

Despite foldable phones being all the rage at MWC, one of the bigger companies at the show didn't have one. LG has been clear that it won't introduce a foldable phone anytime soon, choosing instead to focus on its 5G flagship, the V50 ThinQ. And it's for good reason. As the company's head of mobile Brian Kwon told The Korea Times earlier this month, LG's more pressing concern "is to regain its market position. Considering this situation, it is too early for LG to launch a foldable smartphone." So instead of trotting out a foldable model for the hordes in Barcelona to swoon over, it showed off a second-display case for the V50 ThinQ. Or as LG calls it, the Dual Screen.

Because the Dual Screen is very much a display in case form, the first thing that sticks out about it is the hinge gap. That space between the two screens seems to be about 1/4 inch, and boy is it noticeable. It's much larger than what we've seen on similar devices like the ZTE Axon M. For that reason, this will be better used a separate display rather than simply making the V50 ThinQ have a larger screen. You also can't stretch a single app across the entire space. Not that you'd want to because of the big gap, but LG says it won't be possible to go full screen using both panels. The Dual Screen also doesn't lay flat, even though you can open it 180 degrees. More hinge problems.

In terms of actual use, the V50 ThinQ snaps into the Dual Screen like it would in most cases. There's a three-pin connector that pairs the phone with the accessory. The display inside is a 6.2-inch FHD+ OLED FullVision panel with a 2160 x 1080 resolution at 390 PPI. Compare that to the 6.4-inch QHD+ OLED FullVision display inside the V50 ThinQ with its 3120 x 1440 resolution at 538 PPI and it's easy to see the Dual Screen is a step down in terms of quality. That being said, I wasn't really bothered by it during my hands-on time, and for most scenarios, I imagine a lot of people will feel the same way. Once the V50 ThinQ is in place, a shortcut button on the side of the main display will allow you to turn on the Dual Screen, and get access to basic tools like swapping screens. 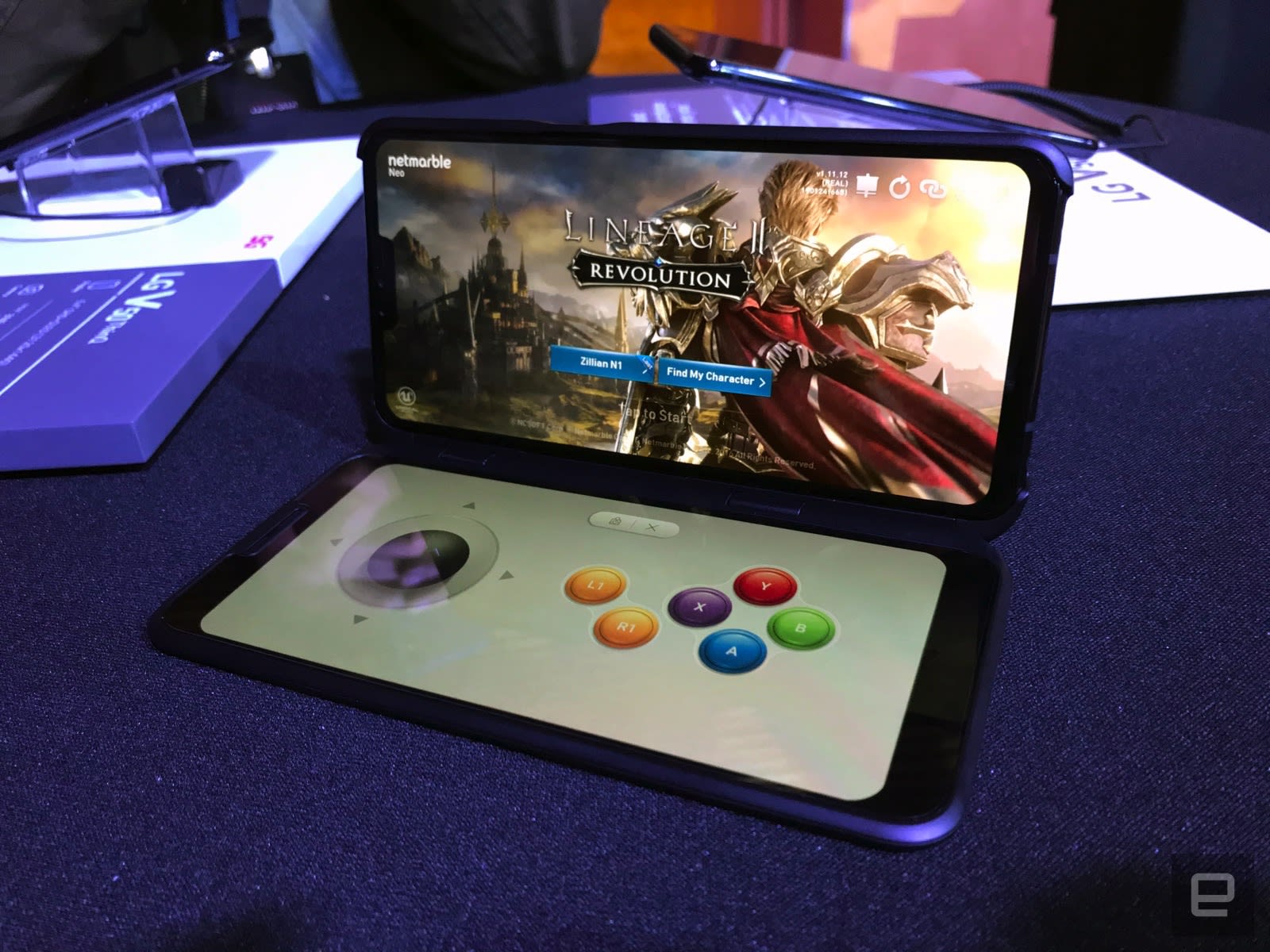 Where the Dual Screen will actually be useful is gaming and general multitasking. LG has created a Game Pad app that's meant to be used alongside mobile titles. Basically, it turns one display into a touchscreen game controller that looks something out Nintendo's DS line. The software also allows you to change the look of the Game Pad with a few preset options, including one for racing games. Though I'll admit, trying to use a steering wheel on a touchscreen wasn't very fun.

There are several multitasking features that give the Dual Screen some merit. LG was quick to point out the camera features first in my brief demo. The first, and probably the most useful is the Triple Preview inside the camera interface. It's exactly what it sounds like: previews of all three possible options for a shot via the V50's rear lenses. The design of the case itself also allows you to use it as a view finder with Mirror Mode, saving yourself some awkward glances when you'd normally have to contort your body to get the perfect shot. There's also a Dual Video Call tool to make chatting a bit easier. 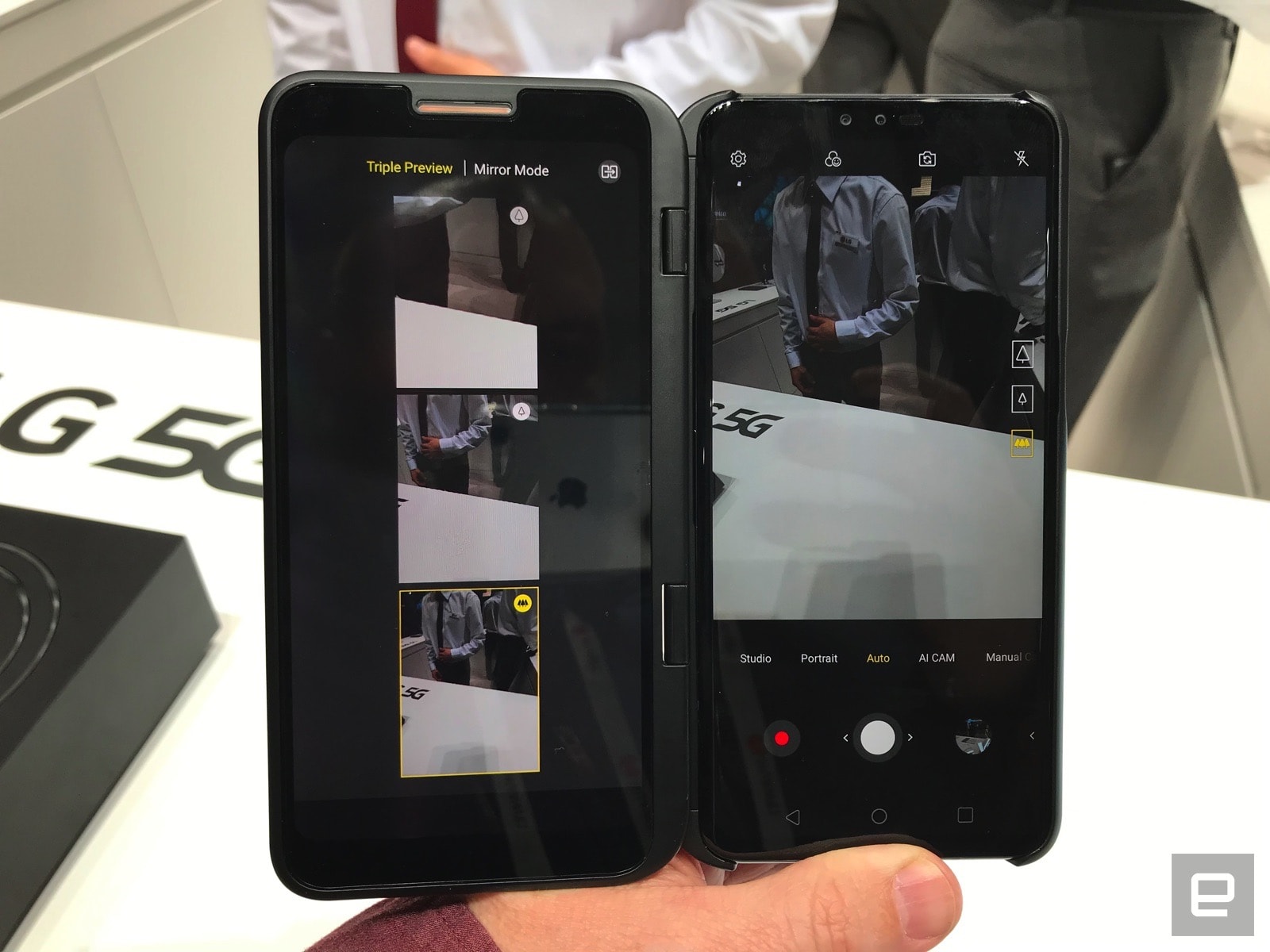 When you need to take screenshots, the Dual Screen allows you to do so instantly with a press. If you're looking at a restaurant listing, map or some other piece of info you need to share in a chat or email, LG's second-display accessory makes that a breeze. As someone who does post/share screenshots often, this would be very useful for me. The bummer is, of course, that Dual Screen won't be available for the V50 in the US.

Dual Screen does give the LG faithful an option while they wait for the company to introduce it's folding phone. But things like the big gap for between the two displays and the lower-quality screen mean this isn't really an acceptable substitute for a true foldable device. Instead, it's a half-step towards where a lot of other companies already are with an accessory that could be a tough sell for make V50 ThinQ owners. LG isn't talking price at this point either, which will probably be the biggest factor in how well this moderately helpful device is received.

All products recommended by Engadget are selected by our editorial team, independent of our parent company. Some of our stories include affiliate links. If you buy something through one of these links, we may earn an affiliate commission. All prices are correct at the time of publishing.
The LG V50's Dual Screen is a half-step towards a foldable phone
5g
5g v50 thinq
case
display
dual screen
foldable
foldable phone
gear
lg
mobile
second screen
v50 thinq