So many standard features, it’s silly to upgrade.

The gas-powered Hyundai Kona is a great little crossover. It's inexpensive, it's fun to drive, it's got distinctive styling and it has room for you, your friends and some of their stuff. Then Hyundai went and made an EV version of the tiny SUV and it's a better vehicle in almost every way. But, more important, it's the electric car that a lot of folks have been waiting for.

The Hyundai Kona EV starts at $37,495 and has a range of 258 miles. That's tops in the under-$40,000 electric car world. But it takes more than just range and a low price tag (although it helps) to create an EV that's worthy of the hard-earned cash of eco-conscious buyers. The thing is, the Hyundai Kona EV delivers.

The 258-mile range bests the Chevy Bolt (starting at $36,620) by 20 miles and is 38 miles better than the yet-to-be-available $35,000 Tesla Model 3. I found during my time with the crossover that "range anxiety" wasn't an issue. My only problem was finding a DC fast charger (more on that later). In a perfect world, you would fill the battery at home overnight, but sometimes you need a charger.

During my drive, the 64kWh battery pack situated under the floorboards delivered the expected range when tooling around in Eco mode. The function pushes the vehicle to be as efficient as possible by reducing acceleration and using regenerative braking. The Eco Plus goes a step further by turning off climate control, because even the heater drains the battery of precious miles.

In most cars, eco mode is frustratingly slow off the line. So much so that I typically put a car in normal or sport mode at the stoplight, until I've gotten back up to speed. The Kona EV's efficient mode has just enough oomph off the line that I used Sport mode at an intersection only when I noted that my lane was about to end and I needed to get ahead of the car next to me. 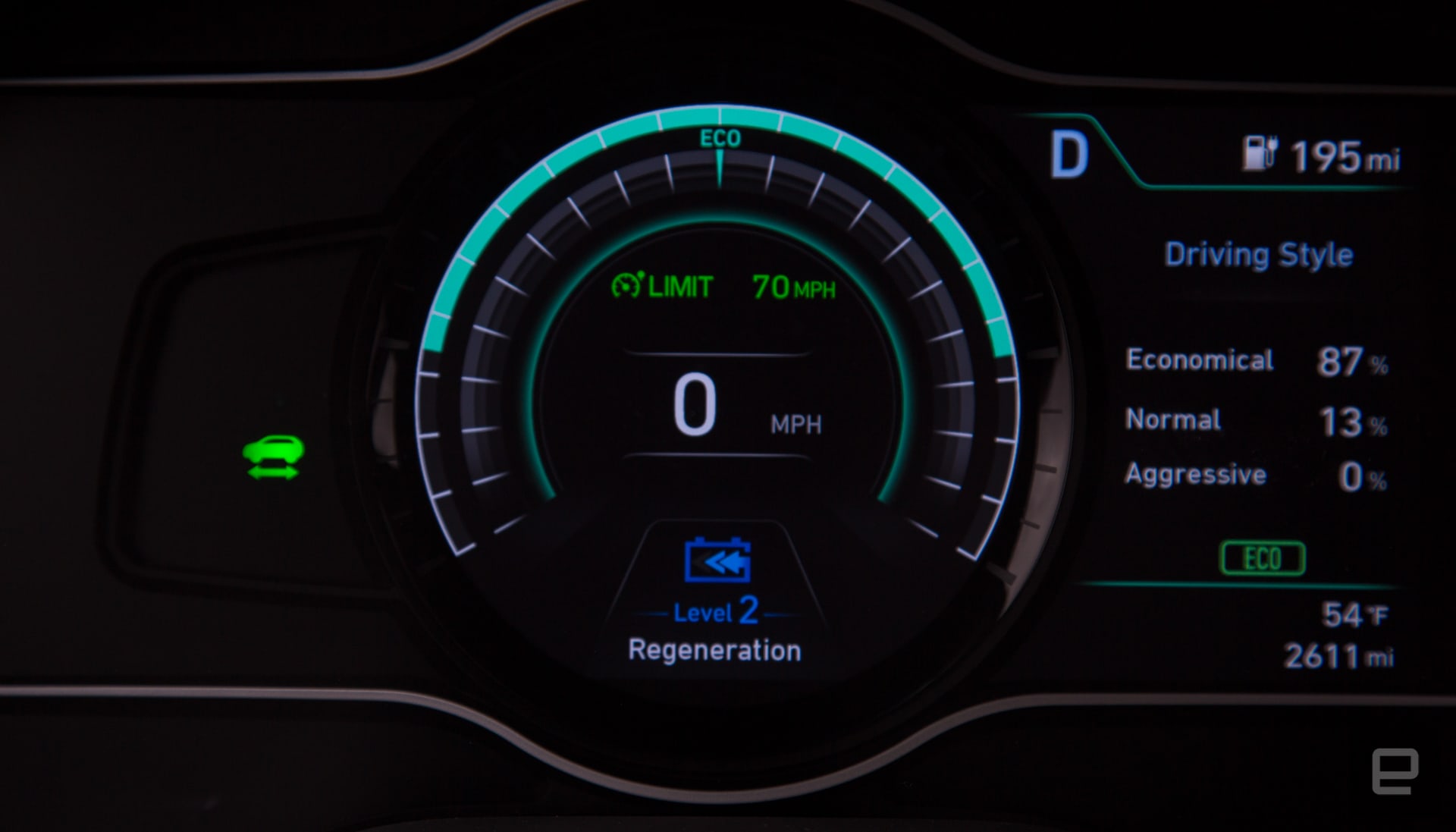 Even on the highway, Eco mode did a solid job keeping up with traffic without feeling too bogged down. On-ramp acceleration was adequate about 70 percent of the time, with only short on-ramps falling short of producing the torque needed to meet the speed of other vehicles.

In Normal and Sport mode, that's where the vehicle's 291 foot-pounds of torque and 201 horsepower make an impression. It's quicker than expected, and while it doesn't hold a candle to the Model 3, I got more than a few squeals out of the tires.

On paper, the Kona EV is only about 0.2 seconds quicker at zero to 60 than the ICE (internal combustion engine) Kona. But on the street, it's clear that the electrified initial acceleration (thanks to electric torque) gives the EV version of the SUV a leg up. The result is a funner driving experience.

Eventually, after bursting forward, you're going to have to turn. The Kona EV's steering is tight for a vehicle of its size and price range. The low center of gravity bestowed upon it by the battery pack helps enhance handling, and it was delightfully sporty during mountain driving. 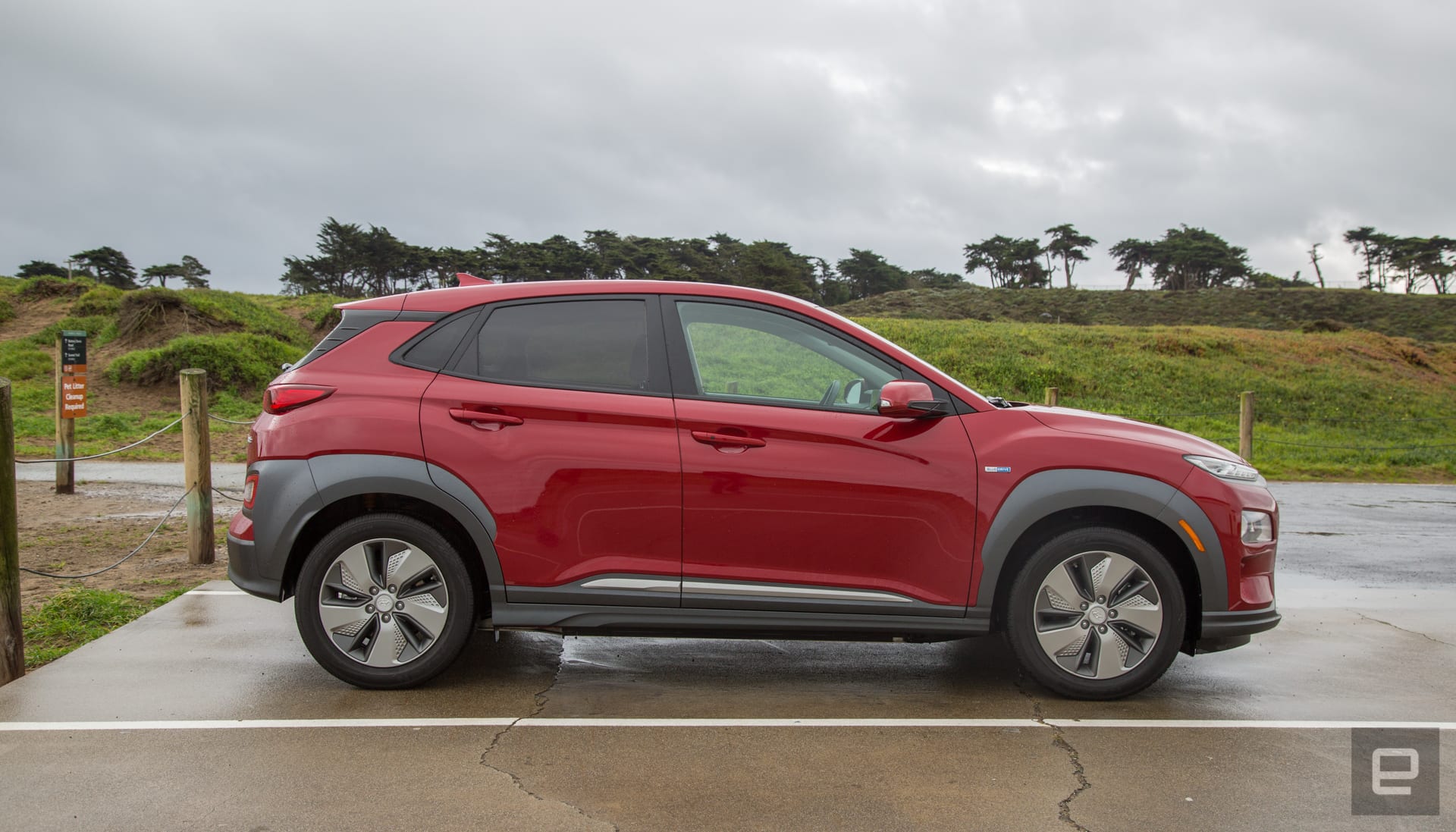 Sadly, life dictates that we spend most of our drive time on the highway commuting to and from work. In that respect, the Kona EV's standard driver's assistance features are helpful.

Hyundai's adaptive cruise control continues to impress with its ability to not only track the vehicles in front of it but also calmly adjust its speed when another vehicle merges in front of it. There's no hard braking (unless needed) when a new car is detected. Instead, the Kona EV smoothly slowed down. While adaptive cruise control is standard, the "stop and go" gridlock version of the system requires an upgrade to the "Ultimate" trim level, which brings the price of the vehicle up to $44,650.

Lane-keep assist (which is also standard) is on par with the Hyundai Nexo and offerings from Honda and Subaru. It's great on straightaways and can handle some of the shallower curves on the highway, but it's as robust as offerings from Tesla and Nissan. It's good for nudging you back into your lane at higher speeds and centering the vehicle in gridlock.

My only issue behind the wheel is that the transition from regenerative braking and pads-on-rotors braking can sometimes be abrupt. You're calmly bringing the car to the stop when suddenly the mechanical brakes surprise you with extra stopping power. It doesn't happen all the time, but it did happen enough to be noticeable. 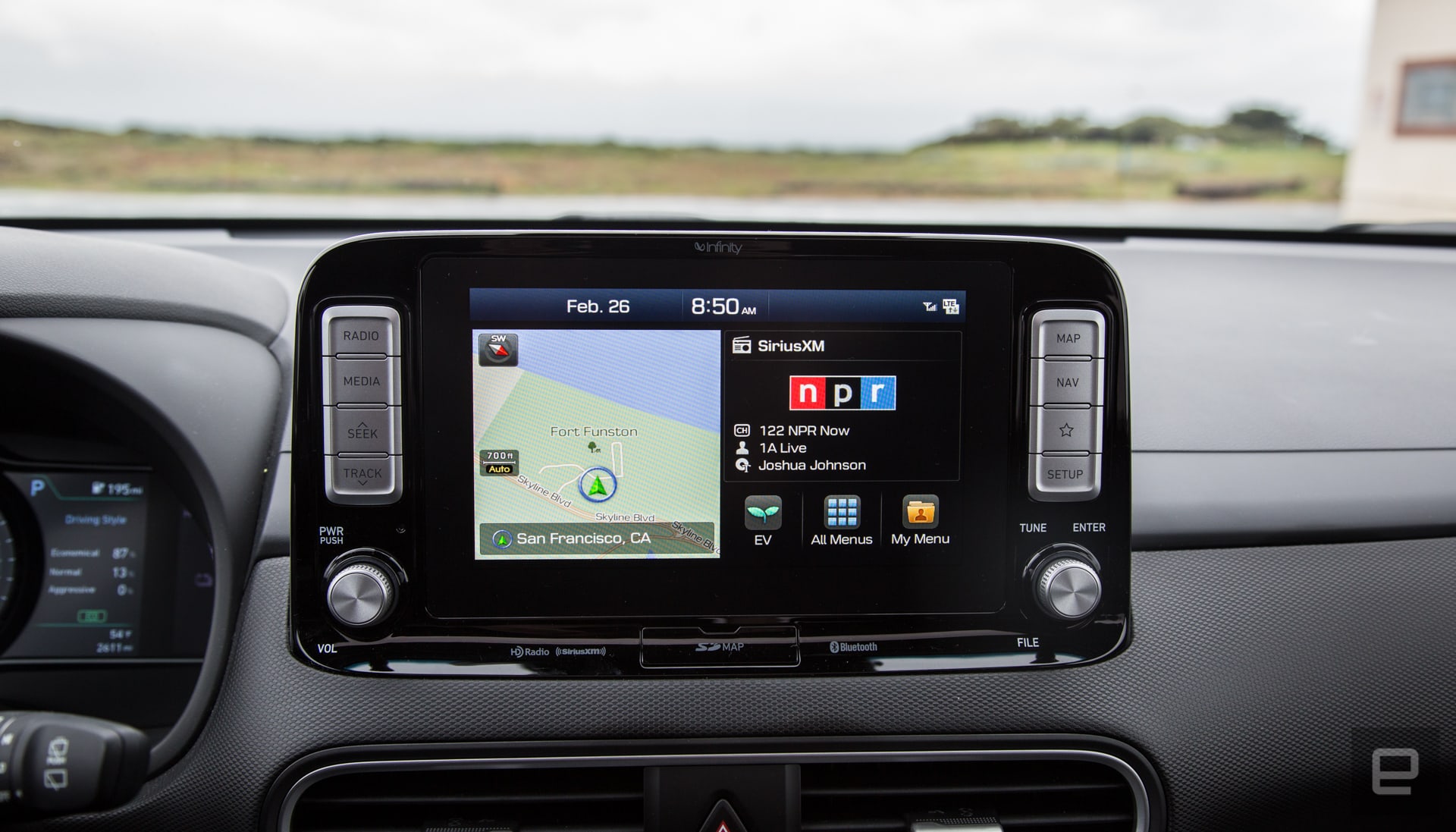 Inside, the Kona continues Hyundai's tradition of using no-nonsense infotainment systems that are easy to navigate and understand. The automaker basically added the tablet interface we've all become accustomed to in a car. The system ships with EV-centric features like charge management and the ability to find nearby charging stations and navigate to them. Hyundai added exactly what the crossover needed to the dash. If you're really looking for extra services, Hyundai supports CarPlay and Android Auto standard.

The rest of the interior is a combination of Hyundai's new metallic styling direction for buttons and standard entry-level-vehicle dreariness. In the center console we found the same silver buttons that appeared in the Hyundai Nexo. While in the Nexo they became difficult to read during low-light situations, in the Kona EV they work well because they're not grouped together.

Everything is where it should be and is easy to reach, and I'm happy to report that the climate controls and media volume are physical knobs and buttons. But at some point, the futuristic metal-like button design comes to a stop.

The seats are comfortable, and my six-foot-three-inch frame never felt squashed in the small SUV. But it's by-the-book entry-level styling when it comes to the seats and doors. The area behind the rear seats has 19 cubic feet of cargo space -- enough for a few pieces of luggage. The split rear seats open up more space if you're looking for additional room for gear. Again, not exciting, but utilitarian.

Fortunately, the outside of the car is nearly as nice-looking as the ICE Kona.

I liked the exterior styling of the Kona when I drove the gas version. I enjoy the aggressive thin headlights that resemble a cat's eyes. The rear of the SUV is equally angular without going all sixties Batmobile. It's a nice balance of designing for a younger audience without alienating older buyers who just want an efficient car. 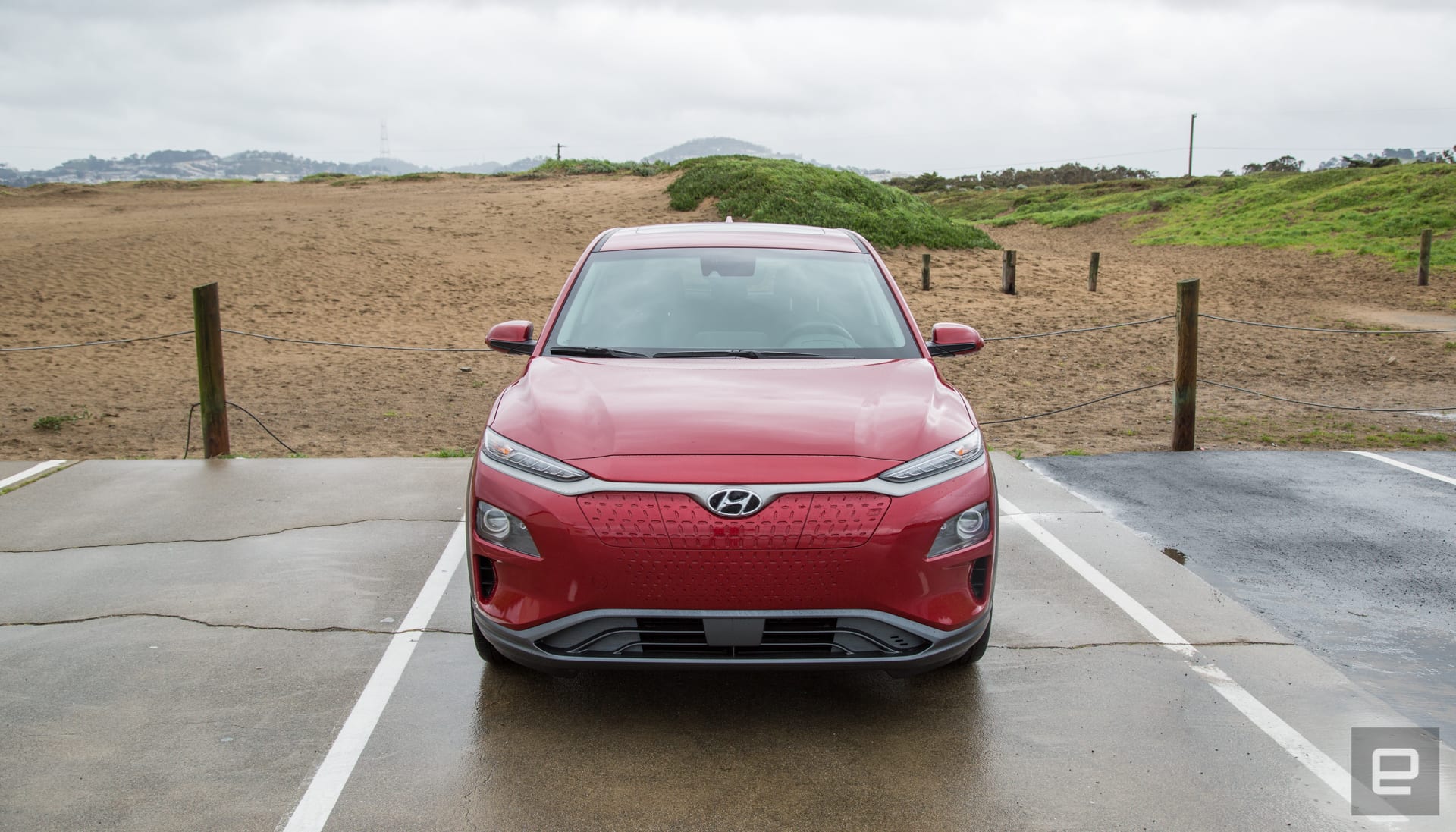 But I do have one issue. The removal of any color contrast on the fascia sort of kills the design of the front of the car. On the ICE version you have the grille; on the EV it's all one color and looks like a single piece. Sure, you don't need a grille on an electric car, but just as a design flourish, it could have stuck around. Fortunately, the Hyundai placed the charging port up in front, so you don't have to back into spaces to top up the vehicle. Even so, I would have liked some sort of accent in that area.

About that charging port: As is true of a lot of advanced features on this vehicle, the Kona EV comes with DC fast charging (via the SAE Combo Charge standard) at no extra cost. That means it supports Level 2 chargers when a fast charger can't be found, which is becoming more of an issue.

The ideal situation is that you charge at home overnight and drive during the day. But sometimes you need destination charging, and the Kona's support of DC fast charging means you'll spend less time waiting for your car to fill its battery. The issue is that stations are still few and far between. You can find a Level 2 station, but it takes longer, and more vehicles are being introduced that need the faster electron-pushing system to refill their larger batteries.

This is where Tesla still has an edge. Its supercharger network continues to grow. Hopefully we'll see an uptick in DC fast-charging stations in the future, because without them, potential buyers are going to look at other options.

That's not a dig at the Kona EV. But it is something to take into account when shopping for an EV. The fast-charging infrastructure needs to expand quicker so that people who adopt these vehicles can actually use them in all situations. 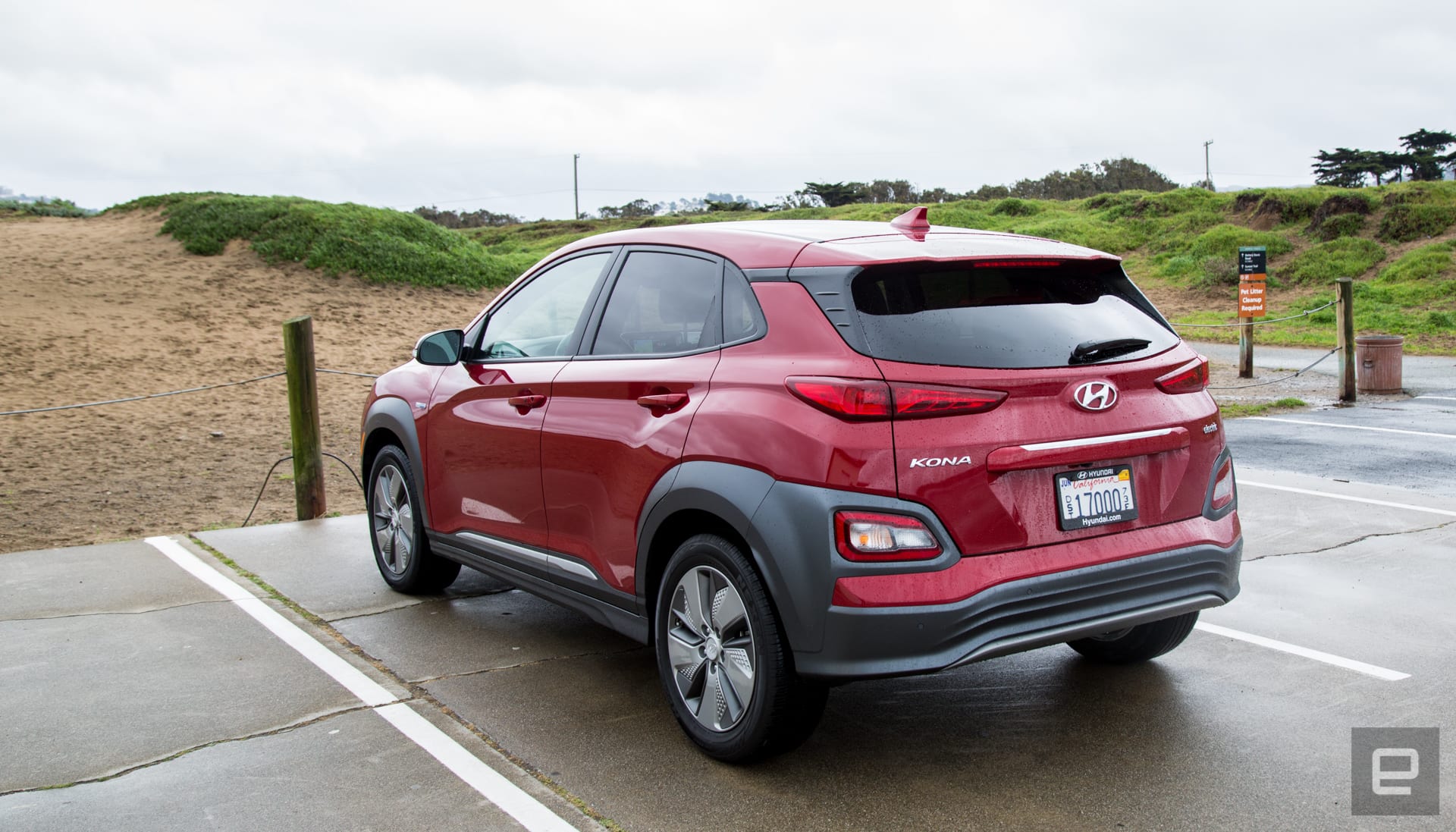 But even without a robust charging network, the Kona EV is a stellar achievement for Hyundai. The automaker took a very nice gas crossover and transformed it into an amazing EV. It has more range than anything else in its price range (even the mythical $35,000 Model 3), and it's packed with standard features that would typically run up the price of a car by thousands of dollars. Not only is it fun to drive, but it satiates the tech desires of younger buyers with a solid infotainment system and a nicely tuned driver's assistance system. It does have some wonkiness with the brakes and front fascia. But even if you weren't looking for an EV, but just for a small crossover, I'd recommend heading down to the Hyundai dealer to take it for a drive. With this car, you no longer have an excuse to overlook EVs as an option for your next purchase, and that's huge news.

All products recommended by Engadget are selected by our editorial team, independent of our parent company. Some of our stories include affiliate links. If you buy something through one of these links, we may earn an affiliate commission. All prices are correct at the time of publishing.
Hyundai’s Kona EV is the car you didn't know you were waiting for
design
electric vehicle
electricvehicle
EV
gear
green
hyundai
kona
kona ev
review
transportation
uk-reviews