Downloads are falling off as vinyl's resurgence continues.

For the third year in a row, the RIAA's annual report (PDF) shows recorded music revenue growing rapidly, shooting up 11.9 percent from 2017 for a total of $9.8 billion. Just as we saw over the last few years, the reason for that growth came from one area: streaming. Whether it's from paid subscriptions, ad-supported services or digital radio types, the $7.4 billion haul from streaming contributed 75 percent of revenue for the year, matching the RIAA's mid-2018 stat. 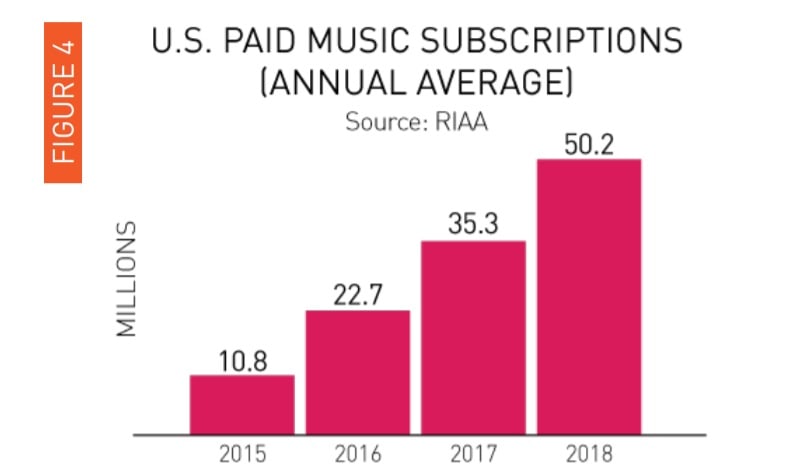 The number of paid music subscriptions jumped yet again, going from 35.3 million in 2017 to 50.2 million in 2018, adding more than a million subscriptions every month. Digital radio (Pandora and SiriusXM, for example) is also up after dropping in 2017, topping the billion dollar mark for the first time ever. Of course, this comes after years of squabbling between industry groups, labels and the various services over how much to charge and how to divide the money, even if artists like De La Soul are still ending up with just scraps.

Meanwhile, the money coming in from digital download purchases and all physical media except vinyl continued to shrink. As people increasingly opt for streaming, downloads dropped from $1.4 billion to just over $1 billion. Vinyl sales grew again to $419 million, and while they still haven't passed the total figure for CDs (down 34 percent from the year before to $698 million) it seems inevitable that they will eventually swap places on the charts soon, after they combined to outpace downloads in 2018.

All products recommended by Engadget are selected by our editorial team, independent of our parent company. Some of our stories include affiliate links. If you buy something through one of these links, we may earn an affiliate commission. All prices are correct at the time of publishing.
View All Comments
RIAA reports music streaming pulled in $7.4 billion last year