Tim Cook is in on the Tim Apple joke

President Trump knows words. He has the best words. And he showed some of those big beautiful words off yesterday during a press conference for the inaugural meeting of the American Workforce Policy Advisory Board with Apple CEO, Tim Cook. Or as Trump calls him, Tim Apple.

That's cool, it's just the leader of the free world mangling the CEO of the world's most powerful company's name in a tongue-twisted mnemonic brain fart. Luckily Tim "adult in the room" Cook took the high road through this awkward situation. He didn't belittle the President for being a mush-brained nitwit in front of the assembled White House Press Corps. No, he took the mature and rational route: changing his Twitter handle to Tim  before sitting back while the social media sphere lost its collective mind over his vicious drag. Bravo Mr. . 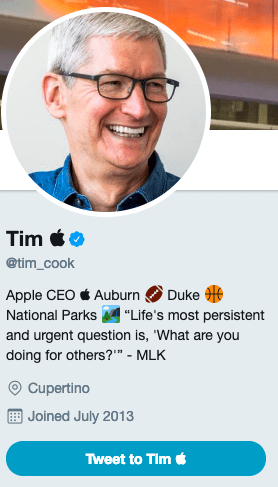