Twitter has previously been criticized by some parties for alleged bias against conservatives, and now it's facing a lawsuit (PDF) from a politician. Representative Devin Nunes (R-CA) is seeking over $250 million in damages for things like alleged censorship, "shadow-banning" of conservatives and allegedly ignoring "lawful complaints" about offensive material hosted on Twitter's servers. Nunes blames the defendants for the results of his 2018 run for re-election, where he won by a smaller margin than prior results that his lawsuit described as "sweeping majorities." 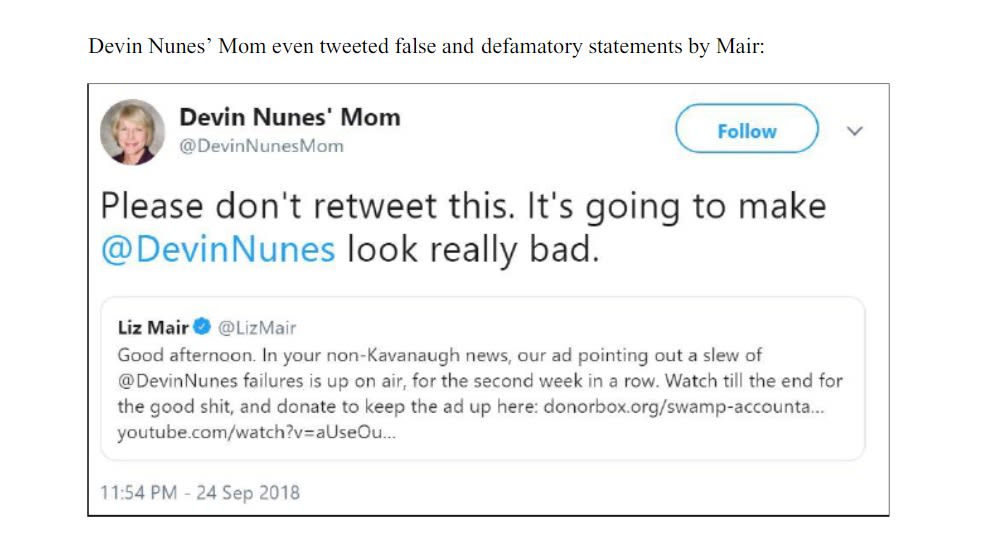 His targets, beyond twitter itself, are Liz Mair, a former RNC Online comms director and political strategist, as well as the @DevinNunesMom and @DevinCow accounts. Other accounts that he took issue with, but are not named as defendants in the suit, include "Devin Nunes Grapes" (@DevinGrapes) and @FireDevinNunes.

Nunes claims that Twitter should be liable for reasons including a failure to enforce its own content rules. While one could make that argument about the site, Nunes is upset about the use of memes to allege crimes for which he has not been charged or convicted, or that portray him as a prisoner, while Mother Jones reports that an "alternative news site" paid for by his campaign committee employed hashtags like #LockHerUp. Last year, Nunes cosponsored the "Discouraging Frivolous Lawsuits" bill. Twitter has not commented on the lawsuit.

Guys, I'm declining comment on this for now but DEVIN NUNES IS SUING ME. If you'd like to contribute to cover my legal expenses please donate here: https://t.co/zcYqrHn6OH