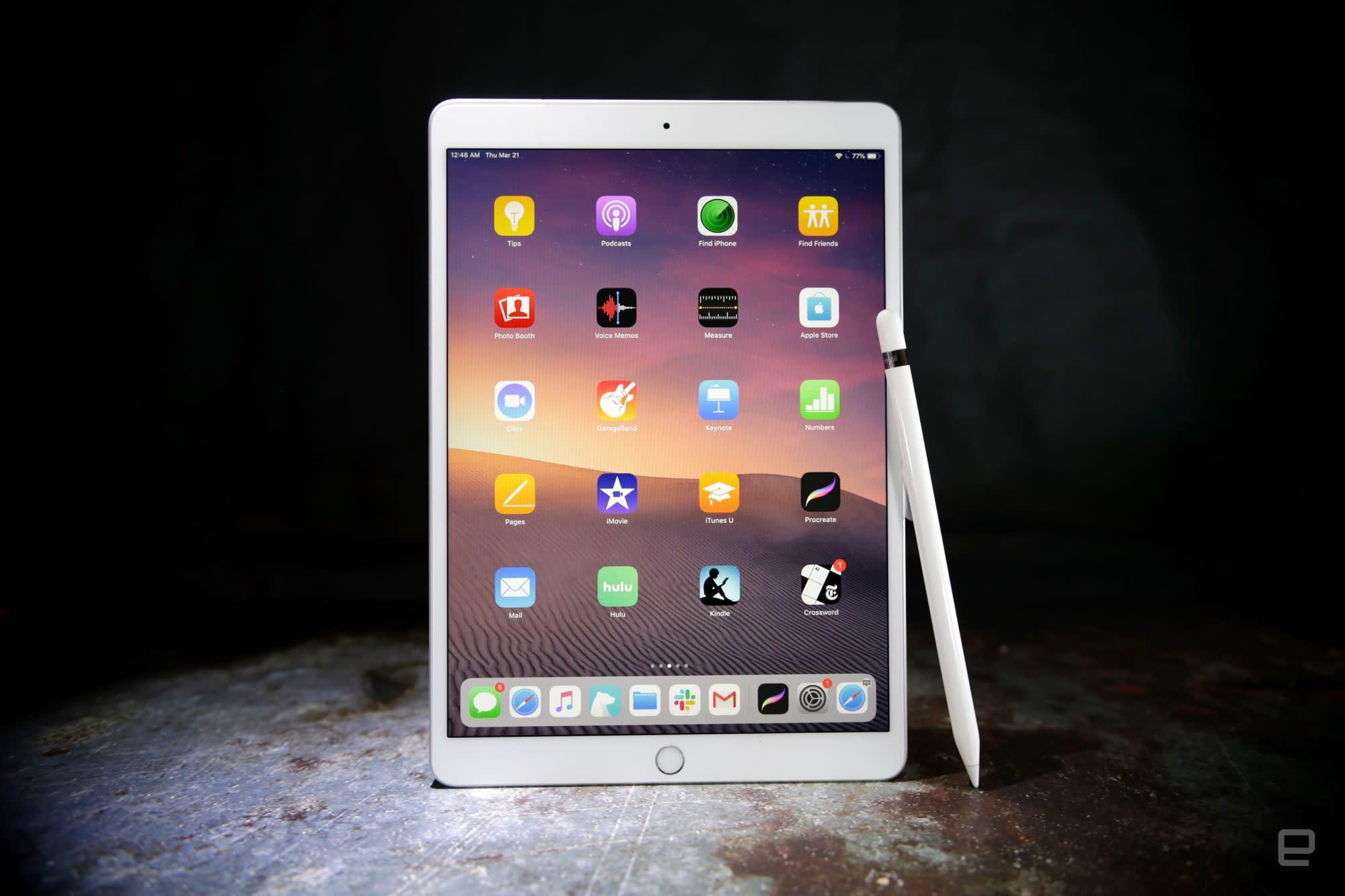 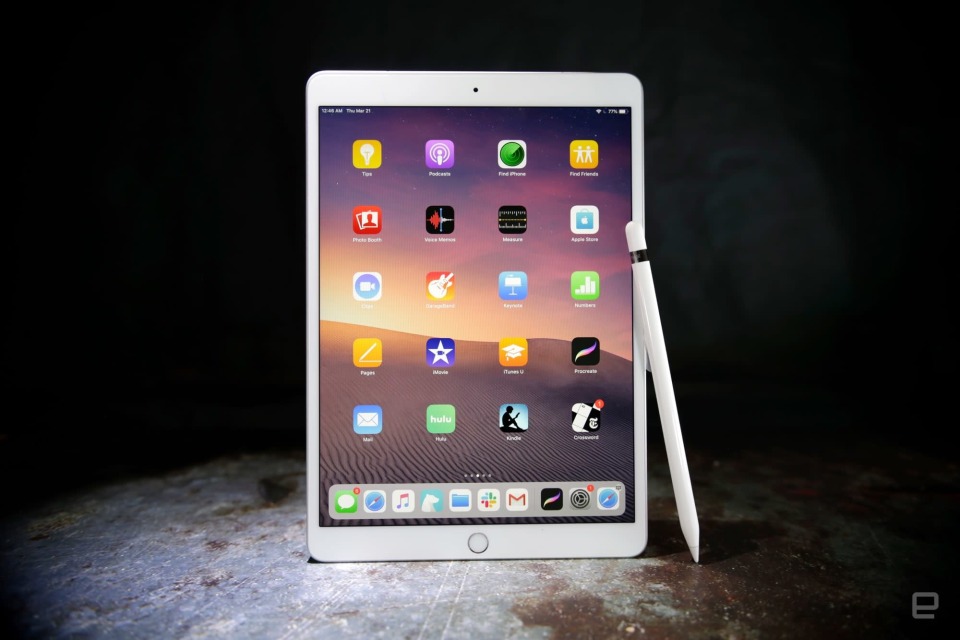 It used to be that, if you wanted to buy the best possible iPad, you splurged on an iPad Air. It wasn't just sleek -- it was terribly powerful, too. (Well, for the time, anyway.) In 2015, though, the company launched the iPad Pro, and before long, the iPad Air line was discontinued and left to the annals of Apple history. Until now, that is.

To be clear, Apple's new iPad Air has little in common with the old models it shares a name with. It has a bigger, 10.5-inch screen and a body carried over from an earlier iPad Pro. It plays nice with Apple's Pencil, the stylus that — while definitely not for everyone — can feel indispensable to the artistically inclined. The most important distinction, though, might lie in the Air's purpose. Unlike earlier models, which were meant to sit atop Apple's heap of tablets, this year's Air was designed to make a few of the iPad Pro's features more accessible. (Maybe Apple should've called it the iPad XR, instead.) That might not be the most exciting goal for a new tablet, but it is still an important one. We've been testing the new, $499 iPad Air for a little over a day now, and it'll be a while yet before we publish our full review. At this point, though, it's already clear that the new iPad Air sits in a sweet spot that a lot of people are going to find compelling. See, on the low end, there's the $329 iPad — it hasn't been touched this year (so far), and it's an excellent, basic tablet. On the high end, there's the iPad Pro, with its USB-C port and fancy new design (and its $800 price tag).

In our limited time together, the Air seems well-suited to living in that crucial middle ground. Its 10.5-inch display is noticeably better than the one in the less expensive iPad, with its wider color gamut and real-time True Tone color tuning. Sure, it doesn't have the super-smooth ProMotion technology that made the last 10.5-inch iPad so easy on the eyes, but Apple had to save money somewhere. And in terms of performance, it's basically a bigger version of this year's iPad mini, since they both share the same A12 Bionic chipset.

That's a very good thing, mind you: it means that both of this year's new iPads are just as snappy as the iPhone XS family, not to mention noticeably quicker than Apple's $329 tablet. Again, we haven't been testing the Air for very long, but so far, it has handle multitasking, light video editing and graphically complex games with aplomb.

Apart from the screen, the biggest thing the Air has going for it (over the mini and standard iPads, anyway) is the Smart Connector wedged into its left side. This is the first time Apple has built one of these into a non-Pro iPad, and for most people, it basically just means you can magnetically attach a keyboard. (Seriously, there are hardly any accessories that make use of this port.)

In fairness, Apple's Smart Keyboard is perhaps the best non-Bluetooth keyboard you can use with an iPad like this, and I've written nearly all of this story on it (with essentially zero drama). There's little question that this keyboard, and the few accessories like it, make the iPad Air better for getting work done. Just be warned that this luxury will set you back an additional $160.

My colleague Nate didn't find the Air all that exciting when it was announced, and I'm inclined to agree with him to an extent. As genuinely helpful as I've found the Air so far, there's little new ground broken here -- you'll mostly find a bunch of very practical refinements and choices made to manage costs. That's not necessarily a bad thing, though.

I think the fact that the Air exists in this form is important, if only because the existing performance and price gap between the standard iPad and the Pros was begging to be filled with a capable mid-range option. And honestly, after using the Air for a bit, it still ticks off more boxes for me than the mini does: the screen is spacious and pleasant enough to look at, its design is at least somewhat more modern, and the Smart Connector adds at least a degree of flexibility.

It would've been nice to see the Air just a few more Pro-level flourishes, like support for the magnetic Apple Pencil 2. Or maybe a USB-C connector so it could use a universal charging standard and some more potent accessories. Those were probably pipe dreams for this hardware generation, though. At the very least, though, the iPad Air manages to feel just Pro enough that it's a viable choice for the creatives and productive types who'd find the standard iPad and the mini too limiting.

That really shouldn't come as much of a surprise; apart from the lack of a ProMotion display, everything about the Air would've been considered Pro not too long ago. And when you consider this thing offers a bigger screen, better performance, a cleaner design and more flexibility than the standard model for not much more money, it's not hard to imagine tablet shoppers embracing the Air. We'll need to spend more time with the new Air before we draw any final conclusions, but for now, I just can't shake the feeling that this might be the right iPad for most people.

In this article: apple, gear, hands-on, ipad, ipad air, ipad air 2019, personal computing, personalcomputing, preview, tablet
All products recommended by Engadget are selected by our editorial team, independent of our parent company. Some of our stories include affiliate links. If you buy something through one of these links, we may earn an affiliate commission.