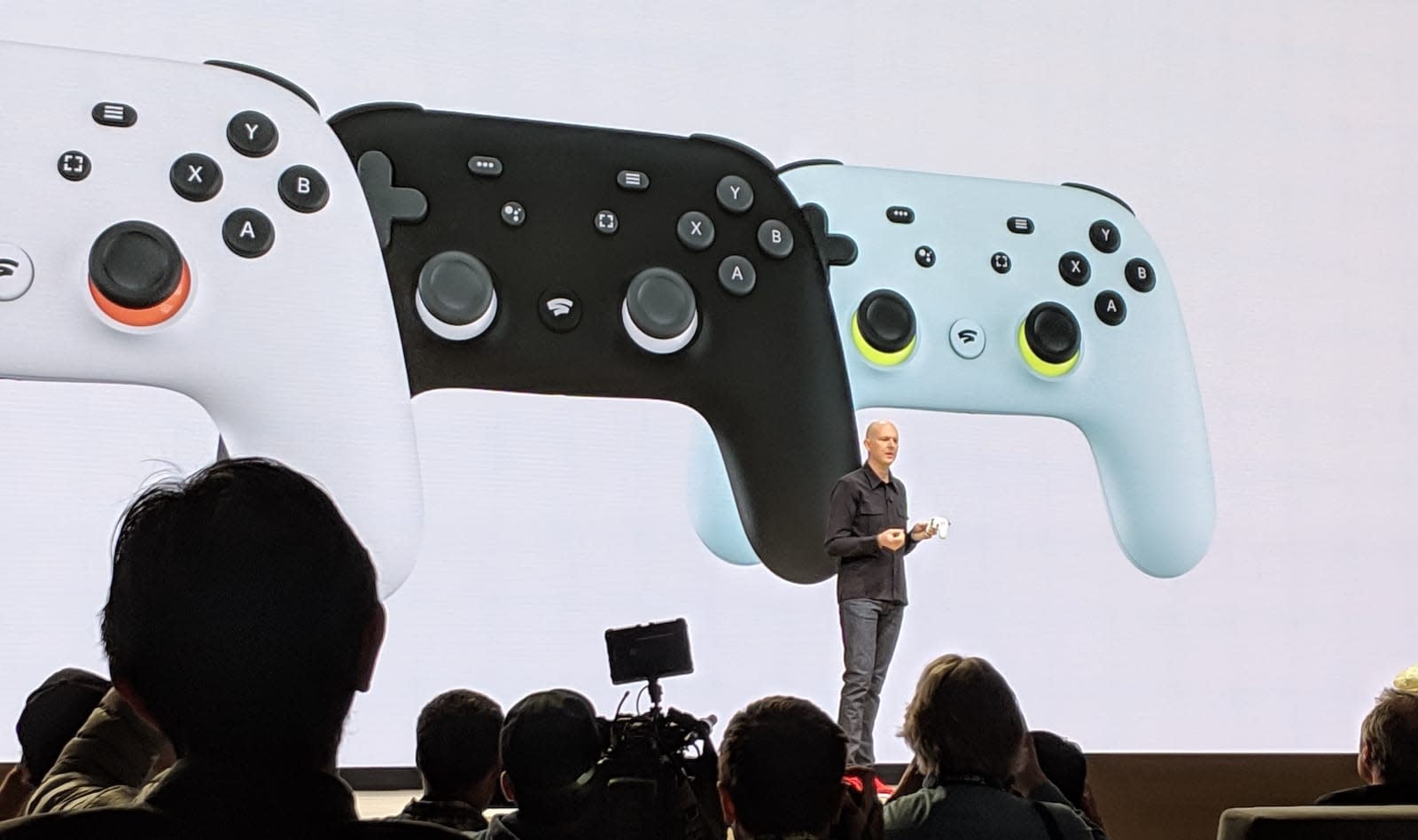 Google is convinced it can get game streaming right

Phil Harrison won't budge. As a vice president and general manager at Google, he's spent the past 15 minutes explaining why Stadia, the company's freshly announced game-streaming service, will actually work on the existing internet infrastructure across North America and Europe. He's focused on the investments Google has made over the past 20 years in cloud networks, talking up the company's 7,500 server nodes, custom CPUs and partnerships with major internet service providers.

I'm hesitant to believe him. I lived through the hype of OnLive a decade ago; we've heard these promises before, only to be sorely disappointed. Of course, 10 years on, Google is promising even more -- seamlessly streaming games at 4K and 60fps with HDR, integrating "play now" options into YouTube, and even loading a specific section of a game via a hyperlink, on any platform, in just five seconds.

"It's actually closer to three seconds than five seconds," Harrison told me the day after revealing Stadia on the Google stage at GDC. "But we thought, you know what, five seconds is actually, probably a good enough promise." 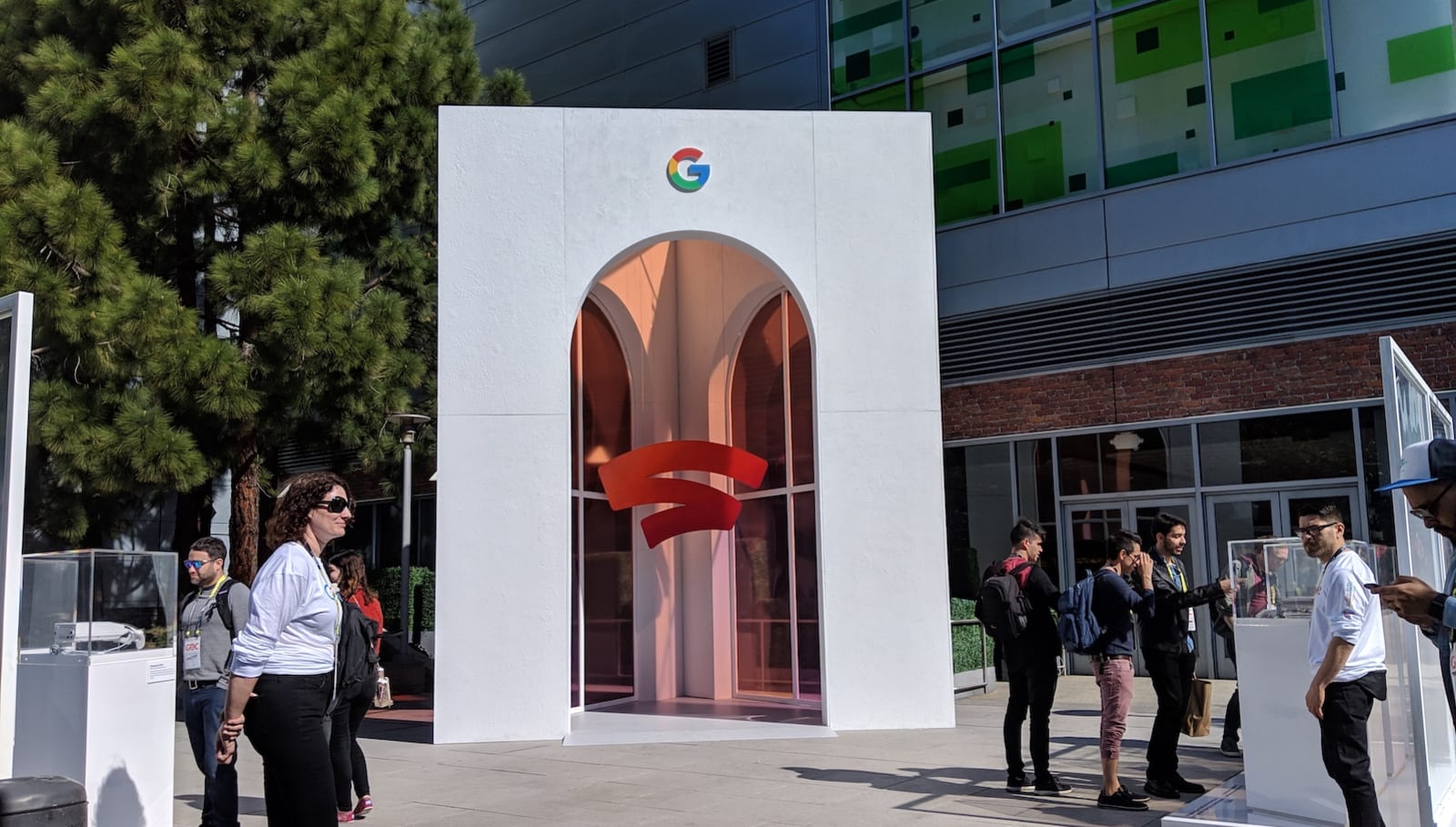 That's how much confidence Google executives have in Stadia. It's due to launch later this year (with an unknown payment model), and there's momentum behind the entire initiative both inside and outside of Google.

Harrison is a 25-year veteran of the video game industry who has held leading roles at both Sony and Microsoft, and Google picked him up in early 2018; Jade Raymond is the former head of Ubisoft Montreal and executive producer of the first Assassin's Creed games, and Google recently hired her to lead its Stadia Games and Entertainment arm. The top game-engine companies, Unreal and Unity, are partnering with Google on Stadia, alongside dozens of other studios.

At launch, Google says Stadia will be able to stream any participating game to any device -- including Chromecasts, smartphones, tablets, laptops and PCs -- at up to 4K and 60fps, plus it'll enable a handful of social and YouTube tricks.

"Our platform is capable of delivering all of the quality, all of the capability that we discussed, over conventional fixed, wired internet into your home," Harrison said. 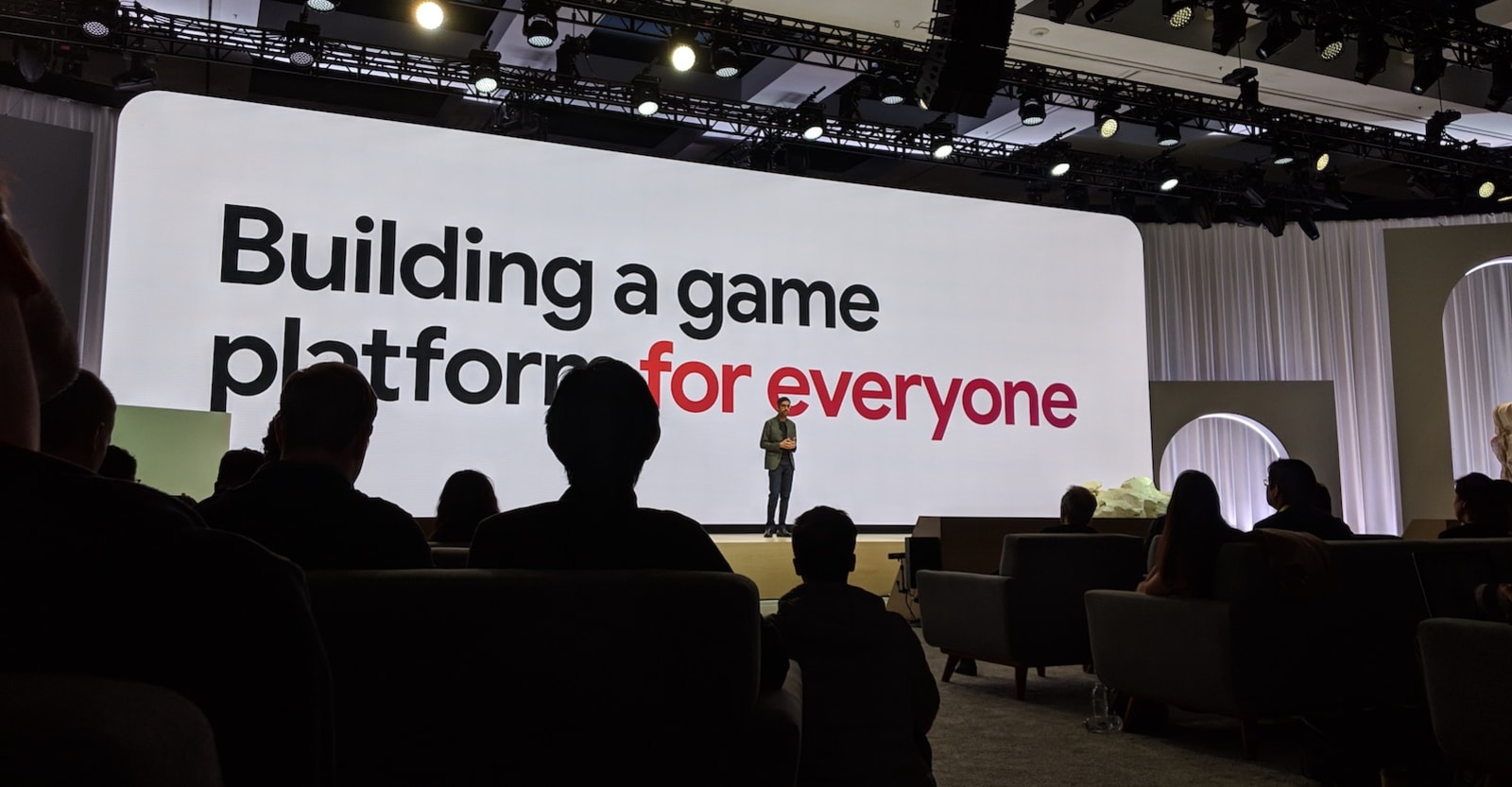 The problem I have with Harrison's repeated assurance is that it relies on things Google has control over, like server hardware and distribution, and a special relationship that Google has with major ISPs. It doesn't directly address the perpetual problem with game streaming: A lot of people have crappy internet.

No matter how powerful Google's cloud infrastructure is, in-home and mobile connection speeds are a potential bottleneck that developers can't R&D away. Harrison answered this critique as follows:

"Google's been making investments in the fundamental fabric of the internet, the networking within our data centers, the way our data centers are connected, for 20 years. We've been a hardware company in the data center for longer than we've been a hardware company in Google Home or phones. That gives us some performance advantages in terms of the way the data reaches the ISP and how that data gets to you in your home. That allows us to deliver a very, very high-quality experience."

Internet distribution has certainly expanded since OnLive and Gaikai tried to tackle low-latency streaming. Statista estimates 109.8 million homes in the US had a fixed broadband subscription in 2017, compared with 84.5 million in 2010. Internet speeds have steadily increased over the years as well, with the US clocking an average download rate of 96.25 Mbps in late 2018, according to Ookla. (Stadia recommends a minimum of 25 Mbps). Plus, Google's big Project Stream beta in October went shockingly well. All of this is good for Google.

And yet. Ninety-six Mbps may be the average internet speed across the US, but it certainly isn't guaranteed anywhere. The fastest and most reliable internet-delivery system, fiber-optic, is not even available in 70 percent of the country, according to the FCC. Organizations from Microsoft to federal agencies and churches are working to fill in the gaps in rural internet access worldwide, but it's a tricky problem for any one group to pin down. That includes Google, whose own efforts to establish a national fiber network have more or less dissolved, leaving a trail of useless silvery cables in cities across the country.

Google's relationship with ISPs is clearly strong. It has a direct-peering relationship with companies like Verizon, AT&T, Comcast and Sprint, meaning these ISPs are plugged into Google servers, giving Google a clear line of data. Of course, BroadbandNow estimates there are more than 2,000 ISPs in the US, many of them small networks serving rural areas, and Google doesn't have the same relationship with all of them. In these cases, its data has to bounce around just like everyone else's.

"It's the depth of the pairing relationships that we have with ISPs to bring Google data to the internet today," Harrison said. "We're able to build on top of that to build a very high-performing game experience streamed to players. Whereas other streaming services that have come before have had to go through that multi-hop scenario, we know what it takes to get to that high quality." 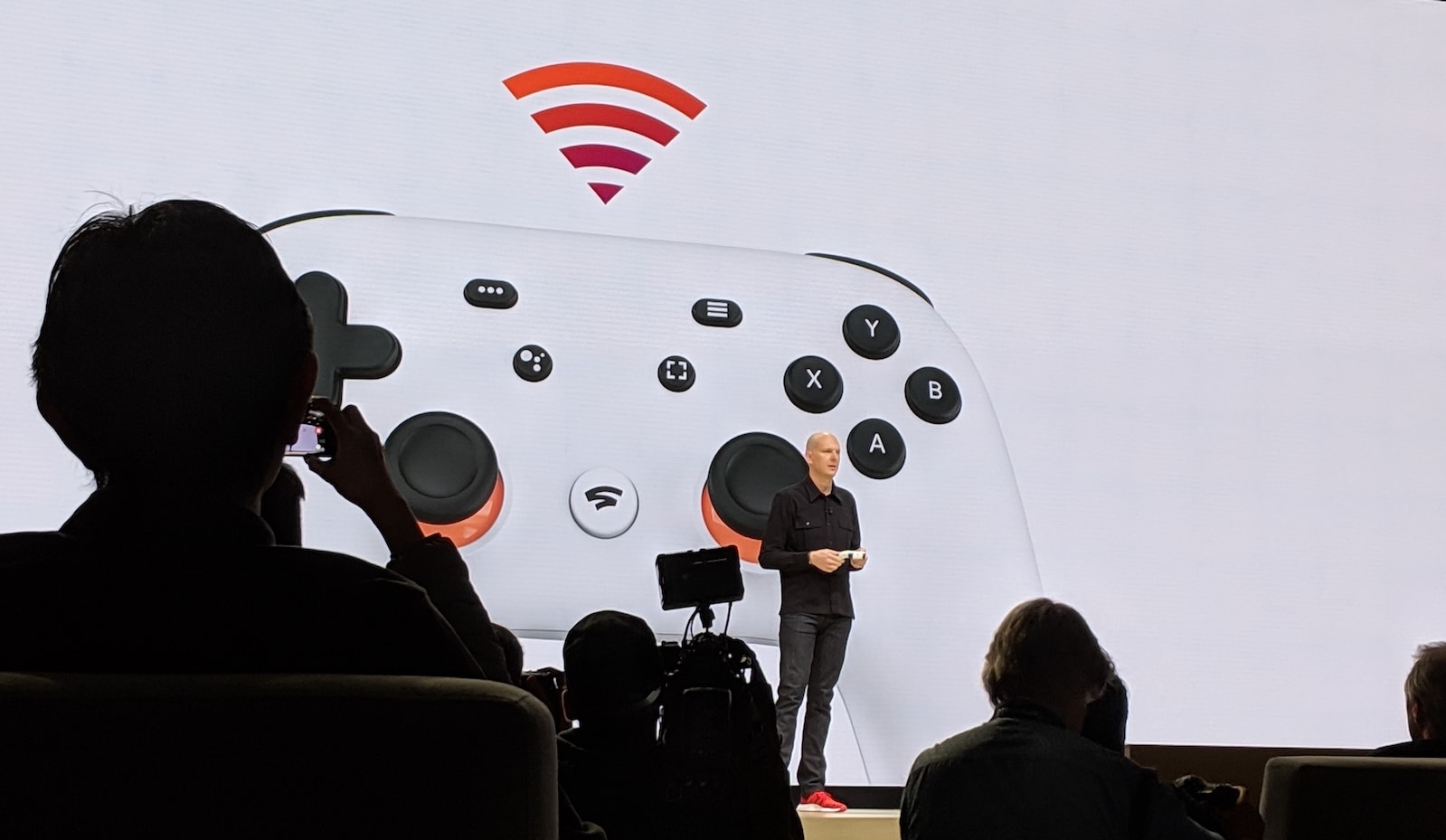 There's no doubt in my mind that Stadia, once it launches, will work. It will load games, and they will be playable. However, OnLive technically worked for a lot of users too. Hell, PlayStation Now exists today and it also functions, but it's definitely not disrupting the established video game ecosystem.

What matters is how well Stadia will work -- and perhaps more important, how well players will expect it to work. If (rather, when) it takes 15 seconds for a link to load a video, if a game stutters just enough to be annoying the entire way through, or if it cuts out at random times according to the whims of a wily internet connection, Stadia will likely be viewed as a failure, regardless of how far Google's technology has truly come.

Google is promising incredible things. Aside from 4K, HDR and 60fps, as well as game loading times as short as three seconds (all from a link, no less), Google is already talking about one day streaming games in 8K and 120fps. Stadia's technology is scalable, and Google is building it to last. But first, it has to start.

"We also know that we won't reach everywhere in the world, day one," Harrison said. "We're not claiming that we will reach everywhere in the world. The internet connectivity continues to grow, continues to reach more and more people at higher and higher speeds every year. There are some technologies just a little bit over the horizon which we think will be impactful."