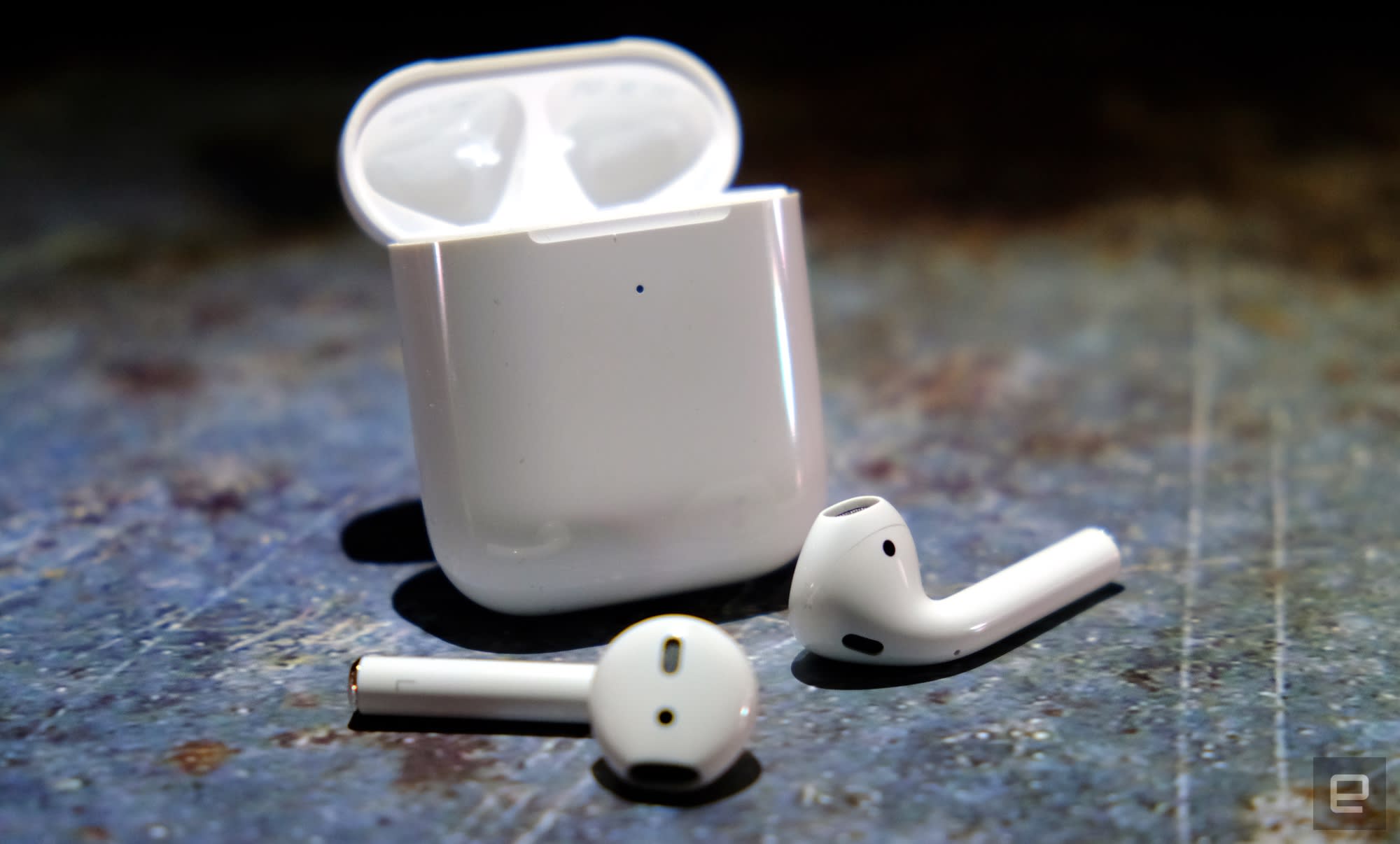 84
The best deals on AirPods, iPads and other Apple devices for October Prime Day engadget_479

In the two and a half years since they were first released, Apple's AirPods have undergone a remarkable transformation. What started out as Q-tip-shaped curiosities have become a full-blown millennial status symbol. Now memes run rampant and a YouTuber can clear 600,000 views with a "proposal" video involving Apple's wireless earbuds. (What I can say? The future we live in is weird sometimes.)

Beyond their newfound coolness, these earbuds have also brought Apple considerable financial success: A recent report suggests that the AirPods are the most popular wireless headphones in the world, and some would-be rivals have dropped out of the market entirely because of their dominance. I doubt even Apple saw this kind of cultural and commercial impact coming.

With all that said, Apple had to produce a follow-up. It's safe to say, though, that these $160 second-generation AirPods aren't exactly what some of the company's fans have been hoping for. Their design hasn't changed so not everyone will find them particularly comfortable, and Apple hasn't done much (if anything) to improve the audio quality. Instead, Apple chose to focus on what made the AirPods so pleasant to use in the first place: their dead-simple convenience. That might not be the most exciting upgrade for people who already have AirPods, but it does mean Apple's second-gen wireless earbuds are a stronger choice than ever for people who haven't taken the plunge yet.

Turn on browser notifications to receive breaking news alerts from Engadget
You can disable notifications at any time in your settings menu.
Not now
Apple 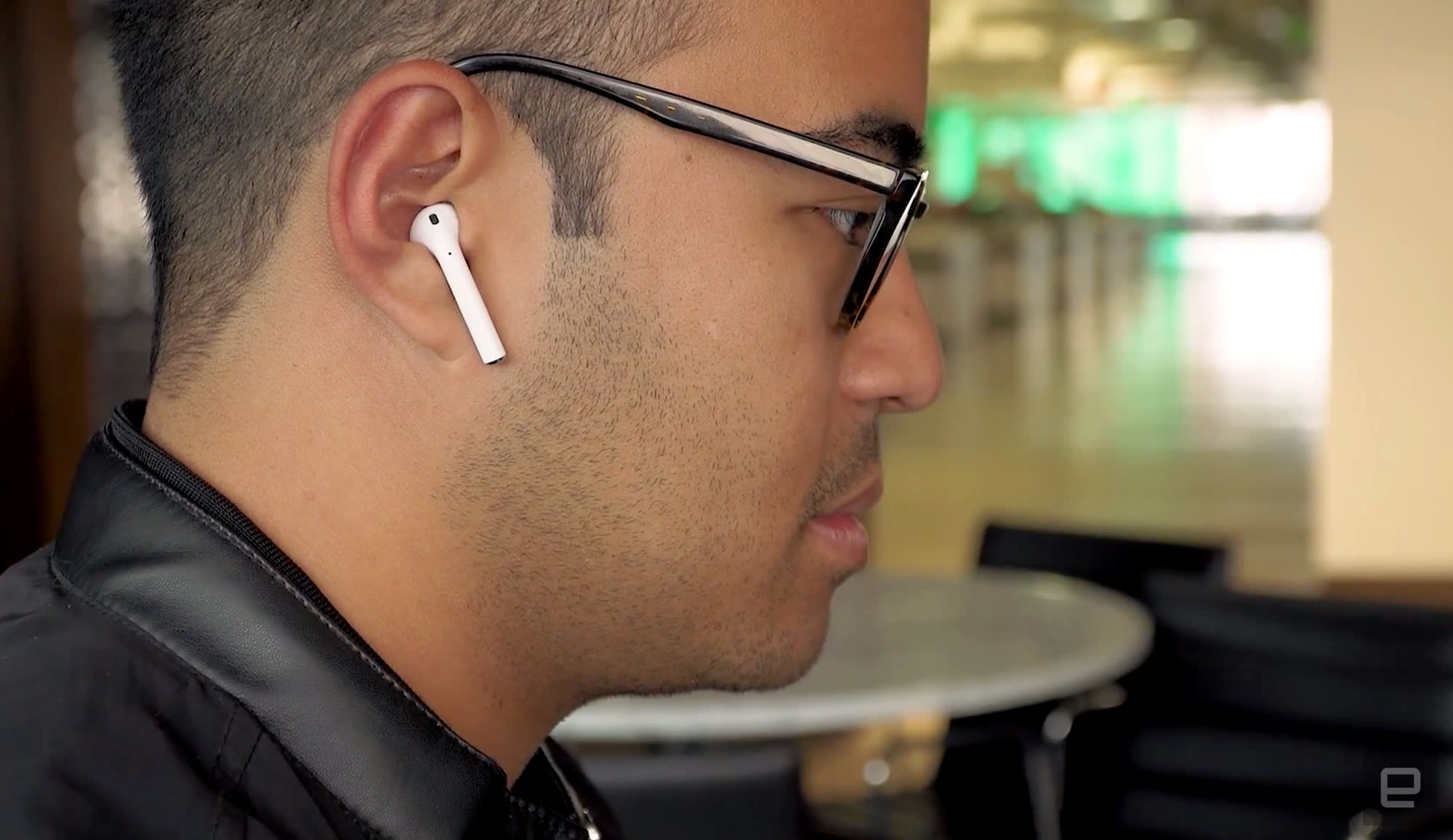 Let's say you fall into that camp. You're an iPhone user, but you've never picked up a set of AirPods in your life. What's all the fuss about?

To me, at least, the answer should become clear as soon as the AirPod case is opened. After just a moment, an AirPod status window will slide up from the bottom of the screen, and pairing the AirPods to your device takes mere seconds after that.

Once you've cleared that (very low) hurdle, you'll hear the telltale blonk that confirms the connection, and you're all set. Every time you stick the AirPods in your ears after that, you'll get the same, near-instant blonk telling you that everything is connected and that you can go on with your life.

The original AirPods were already very good at seamlessly connecting, but the new H1 wireless chipset inside means these second-gen earbuds are even better. Right off the bat, the new AirPods connect more quickly to iOS devices (but only just). With the originals, it often took a second or so to get the connection confirmation -- now it's nearly instantaneous. The H1's wireless improvements also mean these new AirPods are significantly better than the originals at switching the Bluetooth connection between multiple devices. That might sound like a niche use case, and for some of you, that might be true. For me, though, this is kind of a big deal.

Let's say you're getting to the office for the day and you want to switch from listening on your iPhone to your MacBook. With the original AirPods, it usually took about 10 seconds from the moment I hit connect to the moment I got that audio confirmation. With the new AirPods, that delay is cut in half. These improvements also carry over to other iOS devices too, which can be really helpful if you're, say, switching from an iPhone to an iPad to watch a movie.

The H1 makes a few other changes possible too. The connection range remained more or less the same across both models: I set my phone down and walked clear across our San Francisco office with both sets of AirPods, and they both crapped out the same distance away from the phone. That said, the new AirPods were a little better at maintaining a connection through walls that the originals have had trouble with. Case in point: In our New York office, getting to our coffee machine from our desks involves a few twists and turns, and I could always count on the original AirPods to lose their connection if I walked over without my phone. But now? I can waltz over and pour my third coffee of the day without interrupting my podcasts.

In practice, these aren't groundbreaking improvements, but they're not nothing. Saving all those fragments of time has meant I could devote a little more of my day to other things. And to be fair, there are a few notable steps forward to be found here. For one, the H1 chipset means you can talk to Siri more easily. Unlike the original set, these new AirPods are always listening, so there's less fumbling for your phone involved when you need to ask Apple's virtual assistant a question. It's also worth noting that -- whether you like Siri or not -- it sounds noticeably more natural here than it did piped through the original AirPods. That's all because of changes Apple made to the way it routes Siri audio to the AirPods, which is more like handling a phone call than listening to music. 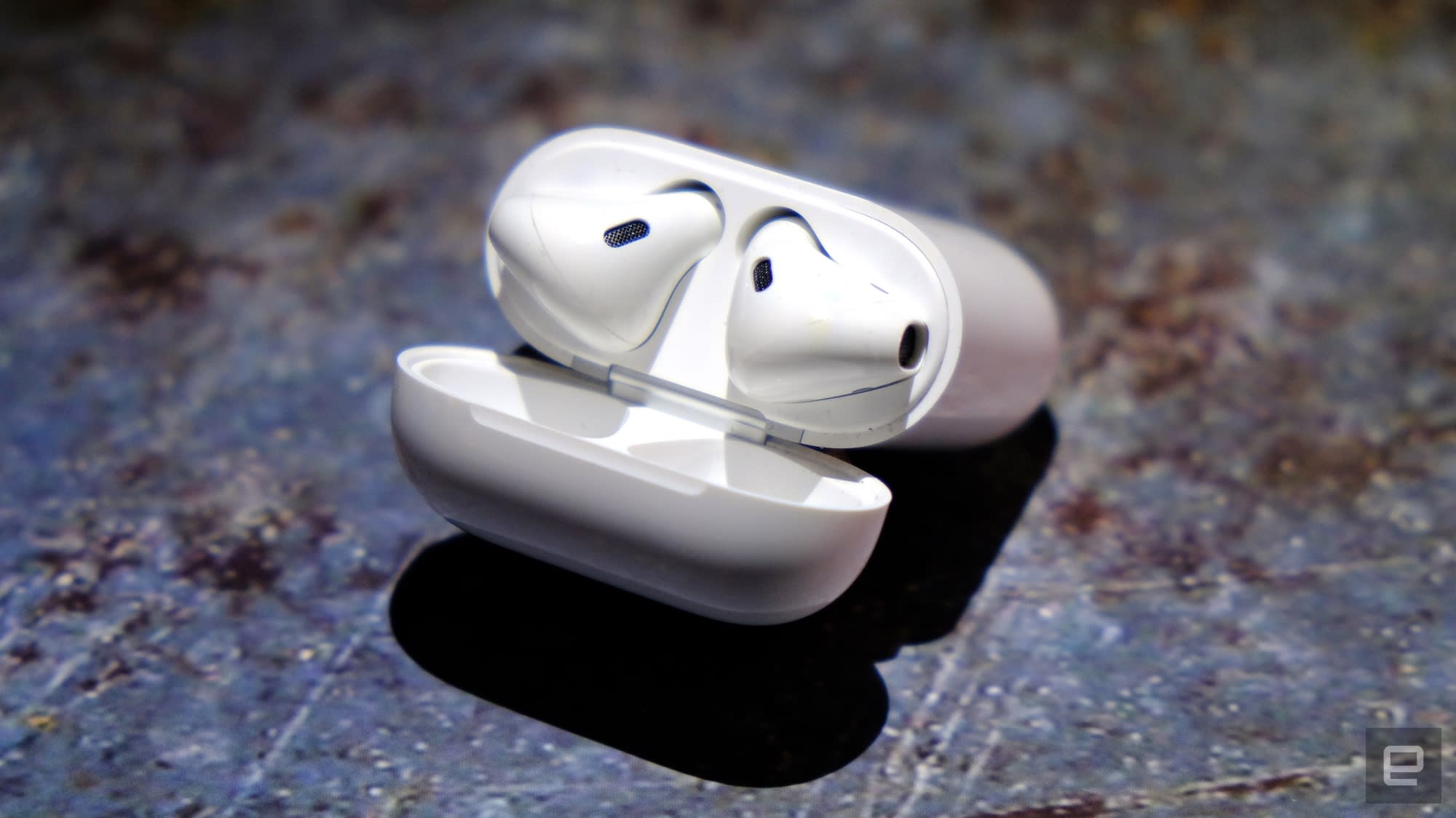 And while I've been able to listen to music with these new AirPods for the same five-ish hours the originals were rated for, I've noticed a significant increase in how long I can use them to conduct phone calls. Granted, like most millennials, I try to avoid actual phone conversations as much as possible, but I bit the bullet for this review and handled a two-hour conversation with no trouble. (The earlier AirPods tended to die after about an hour and a half, tops.) Thankfully, charging the AirPods again is as simple as popping them back in their case, which typically provides between four and five full charges.

This year you can also charge the whole shebang wirelessly. The luxury will cost you extra though: The standard AirPods sell for $160, but the AirPods with the wireless-charging case cost $200. (You can also buy that case separately to use with your original AirPods for $80, but I'm not sure it's worth it.) Long story short, it, uh, works. It's far from the fastest way to refuel your earbuds so you're much better off plugging in a Lightning cable, but it's handy if your home is full of Qi-compatible charging pads. That fully wireless life just isn't for me, though, and if you're in the same boat, feel free to save your $40 for something else. A nice meal, maybe.

So far, the AirPods are at least marginally better than the originals in almost every way that matters. We now come to what might be the most contentious question in this whole review: Do these new AirPods sound any better than the ones we already had? Opinions between reviewers seem to be split: Some say there is no change at all while others point to a marked improvement in volume and presence. My answer lands somewhere in the middle.

Personally, I've found that these new AirPods produce sound that feels ever so slightly louder and more full than the originals. These are subtle differences, but noticeable ones. When I let my colleagues try the AirPod 2s in a blind test, though, about half thought the original ones sounded better. (In case you were curious, I made sure to clean the earwax out of the original AirPods before I started this testing.) 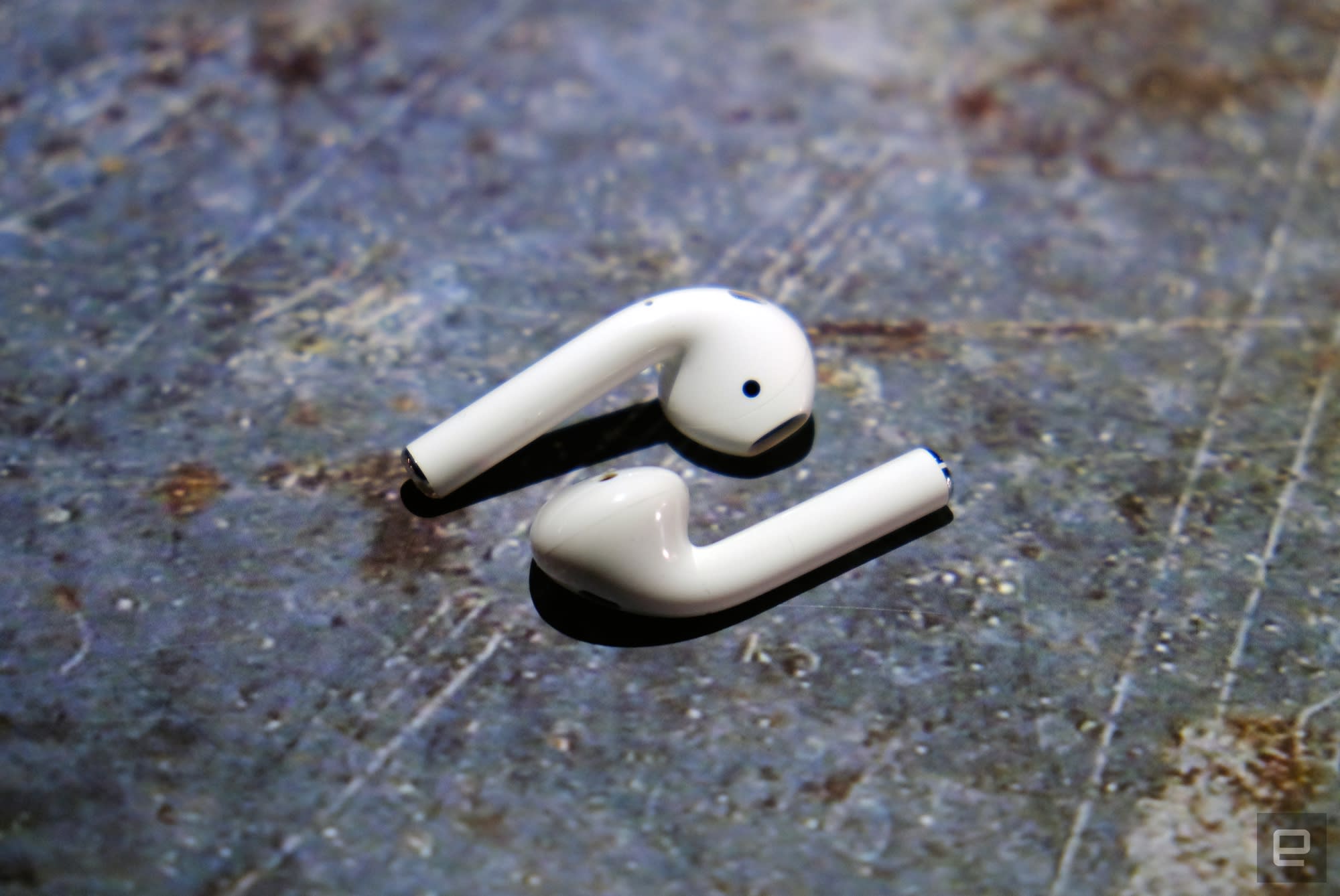 All Apple would tell us is that both versions of the AirPods feature the "same great sound," and since none of us could agree on which set sounded better, the company might be right. To be clear, there are much better-sounding wireless options out there, like Jabra's Elite 65t and even Bragi's now-dead Dash Pros. AirPods have never been a go-to for audiophiles though -- it's all about convenience, and whatever subtle changes to the audio quality there are here shouldn't affect your decision to buy or skip these.

In the end, I've been perfectly pleased to add the new AirPods to my daily routine. That doesn't mean they're exactly what I was hoping for -- more-significant changes to sound quality would've been nice, as would a design that did more to block out ambient sound.

Even so, all the work Apple did to smooth out the few rough edges in the AirPods experience makes these pricey earbuds a more worthwhile purchase. If you already have a set of AirPods and their batteries are still holding up, you can put your wallet away and rest easy knowing you're not missing much. But if you're an iPhone or iPad user who has been waiting to take the plunge on the AirPods, there's no question: These are the most convenient wireless earbuds you'll ever use.

All products recommended by Engadget are selected by our editorial team, independent of our parent company. Some of our stories include affiliate links. If you buy something through one of these links, we may earn an affiliate commission. All prices are correct at the time of publishing.
View All Comments
Apple AirPods review (2019): More of the same, but that's OK