Ford's 'Mustang-inspired' electric SUV will have a 370-mile range

It has also announced a hybrid Explorer for Europe.

When Ford announced that it's investing $850 million to build EVs in Michigan, it proved that it's ready to spend big money to make its electric dreams come true. That's a sentiment it has echoed at the "Go Electric" experience in Amsterdam, Netherlands, where it has revealed 16 hybrid and all-electric models for Europe. One of the fully electric vehicles announced at the event is a Mustang-inspired performance SUV that'll arrive in 2020.

The automaker has been dropping hints about the model, which might be named "Mach-E" after the Mustang Mach 1, since 2018. It even confirmed the vehicle's existence to Autoblog and tweeted an electric-blue Mustang logo on the same day as Tesla's Model Y reveal. Ford says the SUV will have a 370-mile range, determined using the European Union's Worldwide Harmonised Light Vehicle Test Procedure, and fast-charging capability. It has yet to reveal what it looks like, however. Aside from the Mach-E, Ford's other upcoming all-electric model is a Transit van for businesses that will be available in 2021 in different body styles.

Ford has also announced the 2020 Ford Escape and Explorer, which will both come with plug-in hybrid variants. Autoblog warns, though, that the Explorer hybrid might not be making its way to the US, since it has the same powertrain as the Lincoln Aviator plug-in SUV that's arriving stateside in the spring. The Explorer will even have more pound-feet of torque, which could end up being the deciding factor for buyers. Ford doesn't sell Lincolns in Europe, so it wouldn't be competing with itself in the region.

Here are the 16 models Ford announced for Europe: 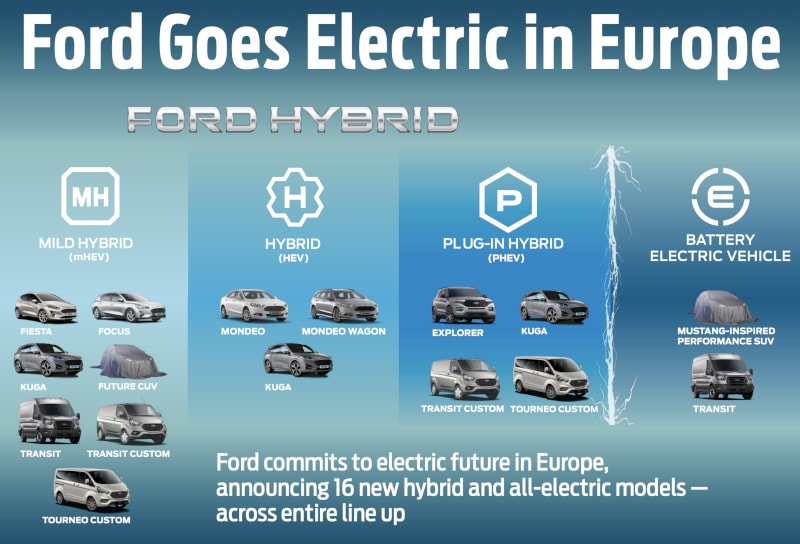