Verizon’s 5G network is live and fast, if you can find it

In a bid to claim the title of the first consumer-ready 5G network in the world, Verizon surprised us by lighting up its 5G nodes across Chicago and Minneapolis ahead of schedule. Obviously, there was no way we couldn't book a flight to the Windy City and see what this next-gen network was capable of. As usual, though, things weren't quite that straightforward. What actually happened is that my time testing 5G turned into a city-wide scavenger hunt, trying — often in vain — to find stable high-speed connections.

To be clear, when you do find 5G, it's usually as fast (if not a little faster) than the 450Mbps (down) that Verizon claims. And, yes, this is only the second day the network has been live, so the carrier deserves a little slack. For now, though, only people who crave life on the wireless bleeding edge need apply — just about everyone else is better off waiting for Verizon (or its competitors, for that matter) to flesh out their 5G coverage maps first.

For those who do want to take the plunge, the costs involved can be surprisingly low. The most crucial bit of hardware I needed was Motorola's $200 5G Moto Mod, attached to a $480 Moto Z3. (You'll also have to pay $10 a month on top of your existing data plan, but that's true of all Verizon 5G phones.) Around $700 for a full-blown 5G setup seems reasonable and is almost certainly less than what you'd pay for a 5G-enabled Galaxy S10. But that little math problem won't work out in everyone's favor — for one, it presumes that you'd want to use an upper-mid-range Android device instead of a full-blown flagship. 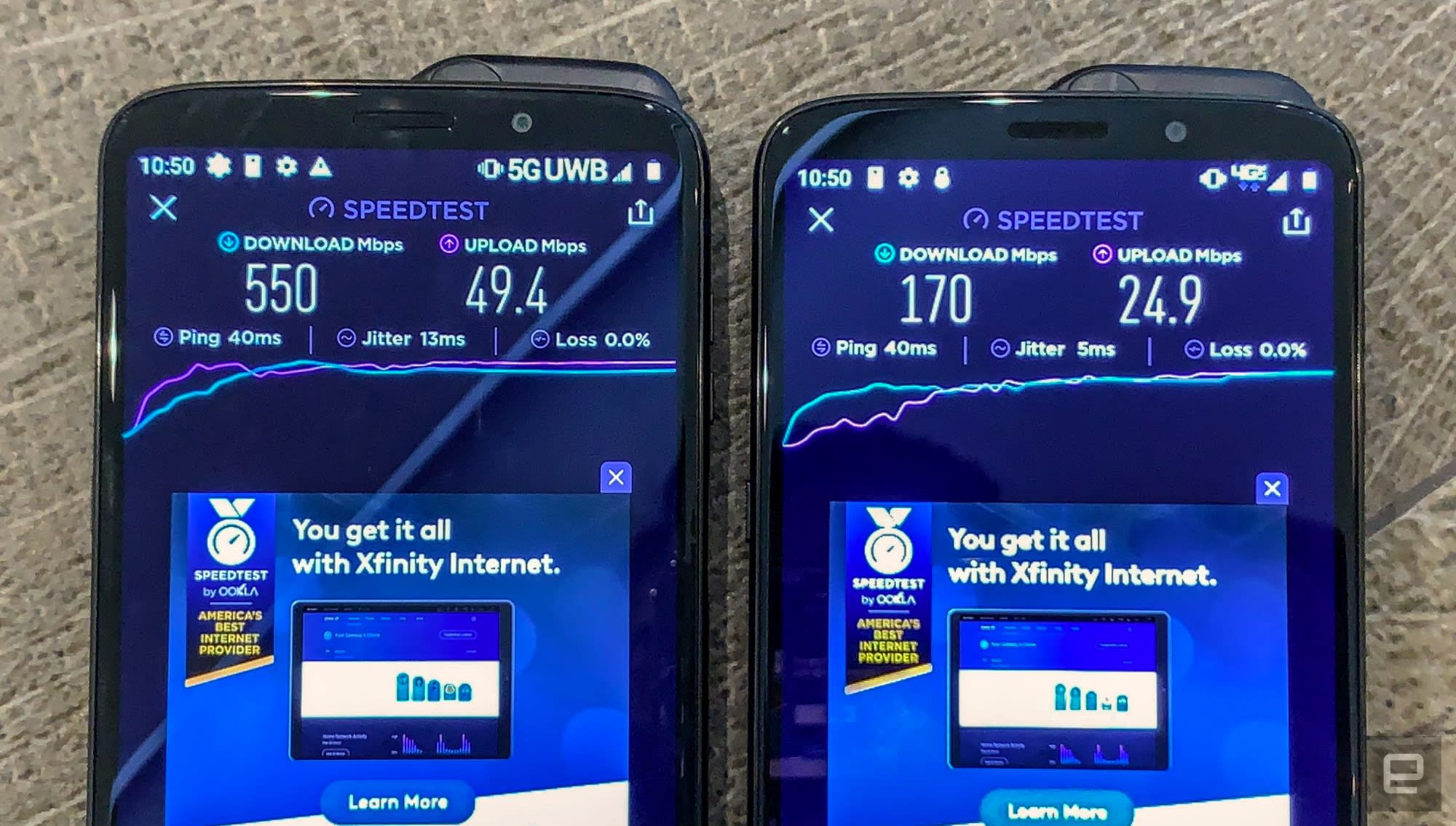 This isn't the first time we've seen the 5G Mod or the Z3, but it is the first time I've used them outside of a canned demo. There are four mmWave antennas inside (for redundancy) and a 2,000mAh battery that only powers the Mod. While Motorola promises that Moto Z2 owners will also be able to use the 5G Mod, there's no official timeline in place — for now, Doug Michau, Motorola's head of product operations says updates for the Mod's "stability and robustness" on the Z3 take priority.

As clunky as the Mod can feel, it actually held up quite well. I've been dashing around the city trying to run speed tests and download apps whenever possible, and after six hours of the most consistent use I could manage, it still had about 40 percent battery left. As it turned out, the Mod's battery life was much less of a concern than actually finding the 5G network itself. 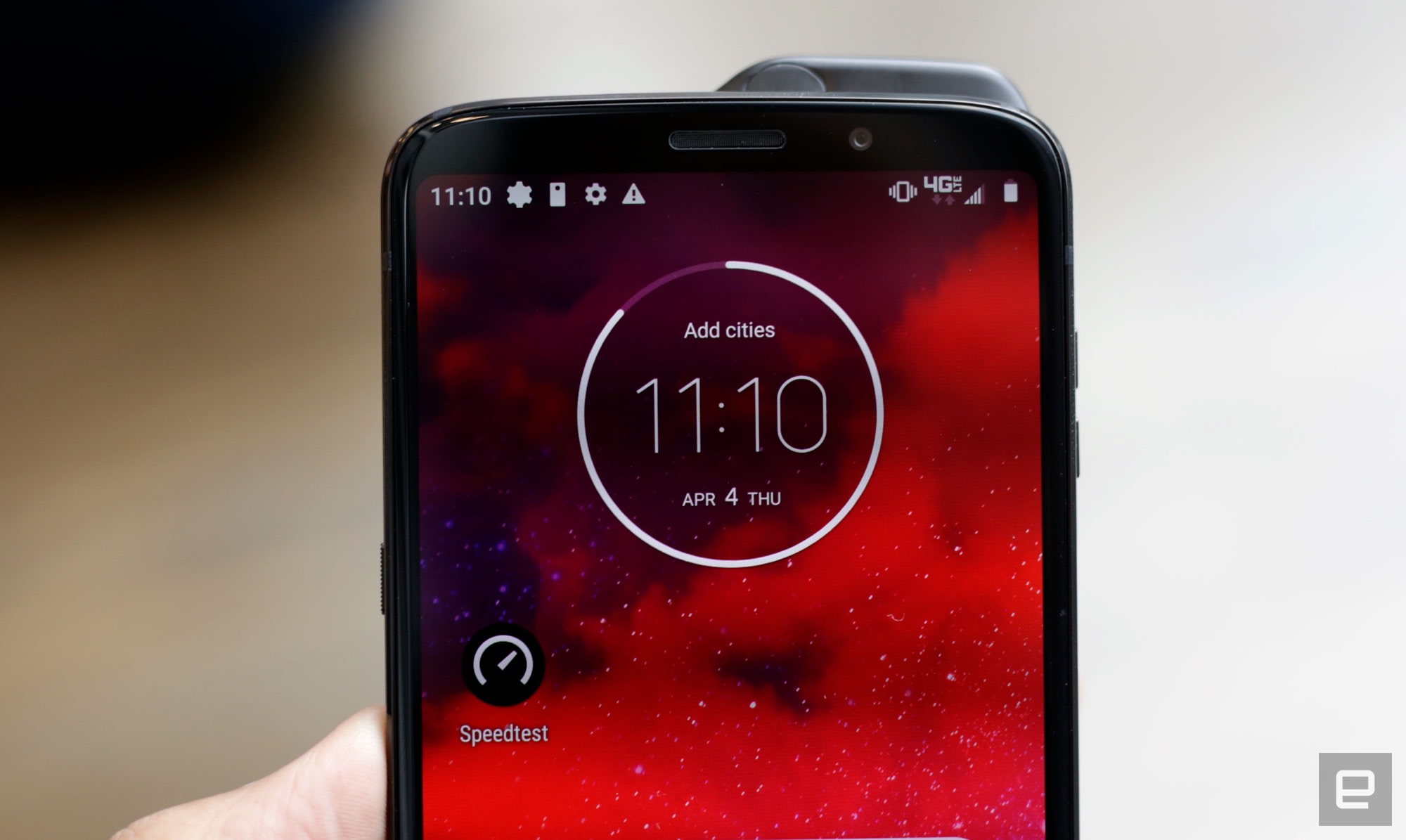 You're going to see this 4G logo a lot.

Verizon wouldn't confirm how many nodes are live in Chicago at the moment, only that it hadn't added any since yesterday. Since they're designed to look unobtrusive when attached to poles and streetlights, there are few visual cues to let you know what kinds of speeds to expect. As you might have noticed in some of these photos, there is an obnoxiously large "5G UWB" (for "ultra-wideband") logo that replaces the subtle LTE mark in the phone's notification bar. Surely that will let you know when you've hit the 5G jackpot, right? Well, not always.

The way Verizon's system is set up, that 5G UWB logo appears only when the Mod is connected to the network and actively using it. That means you could be walking through a slice of the city that has 5G up and running and not even realize it if an app or service wasn't trying to connect over it. It also means that, because the 5G logo doesn't automatically appear when your phone is connected to the network, actively searching for places where 5G works is more difficult than it needs to be. The only ways to know for sure involved walking around staring at your phone in hopes that some app in the background triggers the 5G logo, or triggering the logo change yourself by trying to use the data connection.

Maybe I'm in the minority on this one, but this feels pretty ridiculous. Right now, if I want to download a podcast on the street, I'm going to do it when my phone has an LTE connection, not a 3G one. Similarly, if I want to download a few episodes of The Office in the Netflix app, I'd prefer to do it over 5G instead of 4G. Verizon's approach here doesn't take into account how user behaviors could change when people know they have access to a much faster network, and the fact that someone who pays for 5G service (an extra $10 a month) could feasibly not even know it was available seems tremendously short-sighted.

It doesn't help that the 5G logo also "flickers," because different apps are tapping into the 5G connection and stopping at different times. The result? The phone looks like it's rapidly jumping between 4G and 5G connections, even though that's not necessarily the case. In other words, the 5G connection can look really flaky even when it's not. Even worse, that phone exhibits the same behavior when the 5G connection is, in fact, flaky, which has happened with some frequency here. (More on that in a bit.)

Where I did find 5G, I generally saw very fast download speeds in Ookla's Speedtest app. Emphasis on the word "generally" — in some places, I could consistently get north of 350Mbps down, and frequently saw speeds top out at nearly 600Mbps. Verizon claims that peak speeds can get as high as 1Gbps, but even with few people actively using the network now, none of my tests even got close. Even so, assuming you find the right location, 5G on the Moto Z3 can be really fast. (Of course, that's not to say it doesn't have competition.)

The thing to keep in mind is that there's more to using a phone than just looking at speed tests, and for now at least, the practical benefits of 5G on this smartphone haven't been game-changers. Pages loaded noticeably faster than my personal iPhone on AT&T's so-called 5GE network, but I'm not sure that's necessarily a fair comparison — as I bounced across the city, I rarely found full coverage on AT&T anyway.

5G was more helpful for playing back 1080p60 video on YouTube, though. Scrubbing through the same videos took noticeably less time on the 5G Moto Z3 than another test device I brought with me. I also downloaded PUBG Mobile (a 1.81GB file) over 5G in exactly four minutes and 30 seconds, which isn't bad considering the same download took just over eight minutes over LTE. When I launched the app to try and fumble through a round, though, I noticed that the download speeds for a 200-ish MB update file never went faster than 8MB per second, or 64Mbps. That's not nearly as fast as I was hoping for.

Months ago, Motorola nearly sold me on the idea of trying to use the 5G-enabled Moto Z3 as a superfast mobile hotspot while traveling. It's a great idea in theory, but that's all it is right now — until Motorola releases a software update at some point, the hotspot feature simply doesn't work. It's probably just as well, too, because upload speeds were comparatively tame — they generally hovered between 15 and 25Mbps. That's because only data traffic to the phone runs over the 5G network; everything you try to upload gets routed over LTE, so anyone hoping to move big files around on the go will likely be disappointed (at least for now).

As I plodded around in the rain on foot, I did find a few particularly strong pockets of 5G. The single best place I found to get a sense of the network's speed was right outside Motorola's headquarters in the city's historic Merchandise Mart. That's great if you work for Motorola, but less than ideal for, well, most residents of Chicago. I also stumbled across a decent 5G signal at the corner of Michigan and Monroe, a busy intersection just feet away from Millennium Park and the city's Art Institute.

This is where things started to get a little dicey. The typical speed tests were appropriately quick outdoors, but when I ducked into a coffee shop to try and warm up a bit, the phone quickly fell back to an LTE connection. When I pressed myself up against the coffee shop's front window, the 5G UWB logo popped up again... for just a moment. I spent the next fifteen minutes watching the phone switch between 4G and 5G connections, but the pane of glass in front of me seemed to prevent it from securely latching onto that mmWave signal.

A lackluster speed test result (roughly 45Mbps down) confirmed the issue. Those flaky connections don't just strike when indoors, either. The rest of my jaunt around the touristy spots Verizon said should have functional 5G involved lots of wandering around and freezing in place when I saw the 5G logo pop up. While that often worked, I occasionally saw the phone switching back and forth between 4G and 5G during speed tests, leading to significantly slower results.

I still have a few hours left with the 5G Mod in Chicago, so I'm going to keep poking around the city in hopes of getting a more uniform experience. In fairness, Verizon's 5G network has only been up and running for two days, and when it works, it works surprisingly well. What the whole shebang lacks right now is any sort of satisfying consistency. Like the rain pelting the city on and off today, many of the 5G connections I stumbled into were intermittent and frustrating. The fact that Verizon only wants you to know you're on 5G when you're already using it doesn't help matters.

After all of this, I can't help but wonder if Verizon made the right choice in lighting up its 5G network early. I got the distinct feeling throughout the day that the company's surprise launch caught people on many levels a little off-guard. Naturally, Verizon disagrees with my assessment — Ed Chan, Verizon's chief network engineering officer, told me that the network's stability had improved to the point where launching April 11th as originally planned would've provided people with the same experience they're getting now. That might be true, and I have little doubt that things will improve dramatically in time. That's just how network rollouts go. For now, though, all we can do is wait and hope change happens fast.