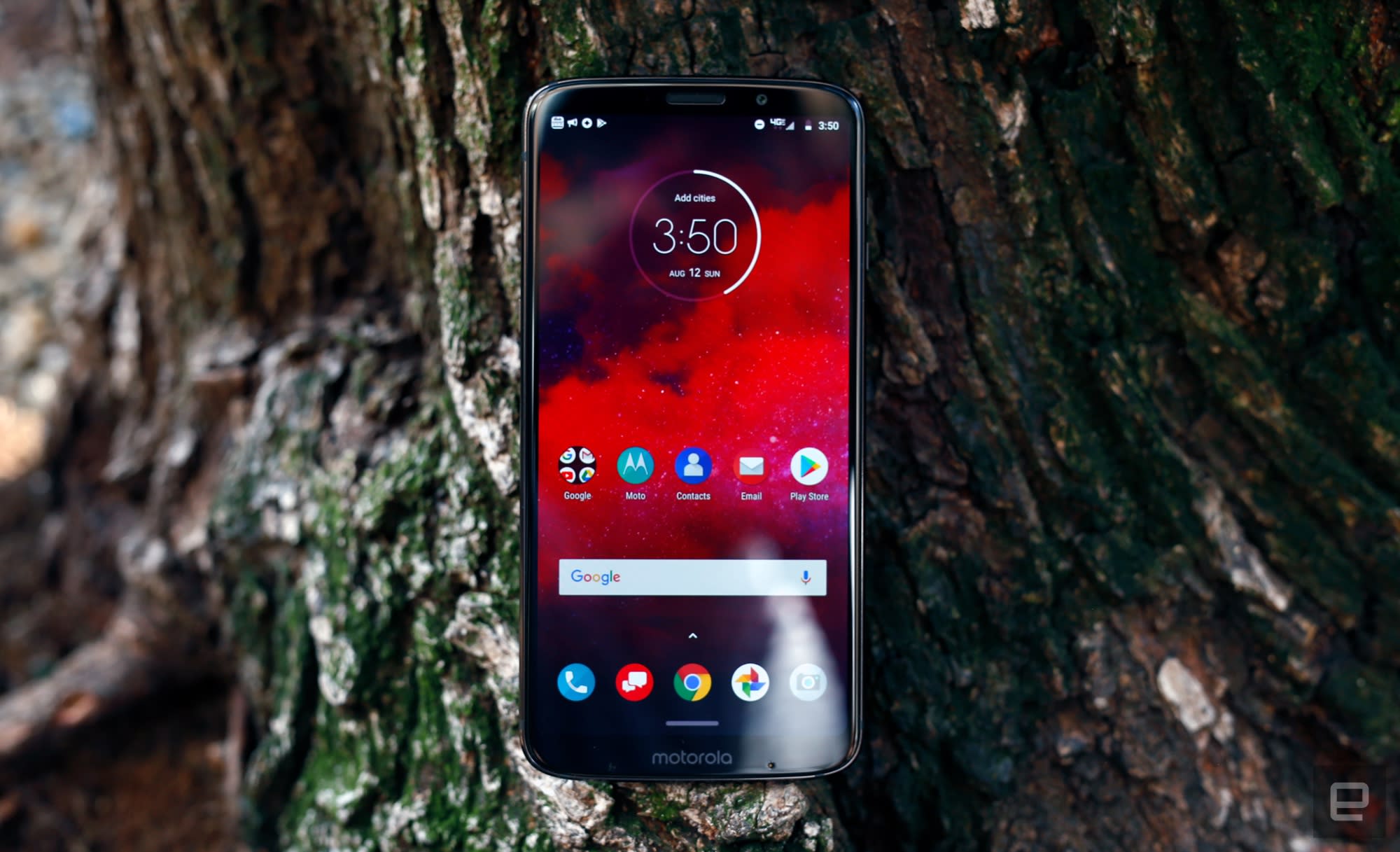 An unexciting smartphone that may get better with 5G.

2016's Moto Z and Z Force proved that a company could make sophisticated, truly modular smartphones. Need better battery life? Slap a new one onto the Z's back. Not loving the built-in camera? Go ahead and add one made by Hasselblad. The list goes on. Motorola's system of magnetically attached Mods was -- and remains -- an elegant way to make a phone better than it was out of the box.

Fast-forward two years, and Motorola just doesn't seem as hopeful about its Z line now. Case in point: With the new Moto Z3, Motorola basically took the guts of last year's high-performance smartphone and squeezed them into a sleek new design with a bigger screen. That might not sound like a bad thing, especially considering that the phone costs only $480.

Here's the thing, though: The Moto Z3 can't help but be disappointing compared with the ambitious modular phones of Motorola's past. It's relatively inexpensive, but the Z3 is also the kind of safe, tepid release that makes you wonder if Motorola really plans to keep making these things. With the age of 5G nearly upon us, though, it's possible that the phone's best days are yet to come.

A note about exclusivity

The Moto Z3 is by no means an awful phone, but I have to imagine that it's completely irrelevant to a decent number of people reading this review. For one, the Z3 is exclusive to Verizon in the United States, and so far the company hasn't said whether it plans to bring the phone to other countries. (Note: Verizon owns our parent company, Oath, but we maintain our editorial independence.) That exclusivity deal actually works out in Motorola's favor, though, because the Z3 is easily outclassed by other cheap premium smartphones -- like the OnePlus 6 -- that haven't been certified for use on Verizon's network. Because of the way Moto Mods attach to a phone, the past two years' worth of Moto Z phones basically all looked the same: They had fingerprint sensors below their screens, flat backs and prominent camera humps. That changed this year with the Moto Z3 and its cousin the Z3 Play. The Z3 is slim, sleek and surprisingly attractive in a minimal sort of way, with a 6-inch OLED screen dominating the phone's face. It's an 18:9 display, and the bezels running around it are minimal too, so there's very little wasted space here. This is becoming a very common look for modern smartphones, and it's also just the kind of modernity that Moto Z phones have been sorely lacking.

The Z3's screen is very good for what it is -- it's bright, colorful and easy to read in bright sunlight. It runs at Full HD+, so it's not nearly as pixel-dense as last year's Moto Z2 Force, but even that doesn't bother me much. I do, however, wish Motorola had found a way to squeeze in the same so-called ShatterShield display it used on the Z2 Force. If you're unfamiliar, the company basically used multiple layers of plastic to protect the OLED displays in its Z Force phones from cracking.

Of course, the Z3 isn't part of the Force series -- maybe it was wrong for me to expect that it have the same features. But Motorola's decision to release the Moto Z2 Force by itself last year seemed like a tacit acknowledgment that people appreciated that sturdy display tech and that it didn't really make sense to release a powerful Z phone without it. Well, so much for that. In fairness to Motorola, the phone has survived a handful of short tumbles, but you don't want to be caught holding one when you get pushed into a pool. Like earlier Moto Zs, the Z3 has a nano-coating to help it resist the occasional splash or sprint through the rain, but that's it.

Anyway, Motorola relocated the fingerprint sensor to the Z3's right side to make room for a bigger screen, and after a week of use I still haven't gotten used to the change. It makes the sensor more prone to fleeting touches -- and therefore accidental unlocks -- especially when you're trying to dig something out of the pocket where your phone is. 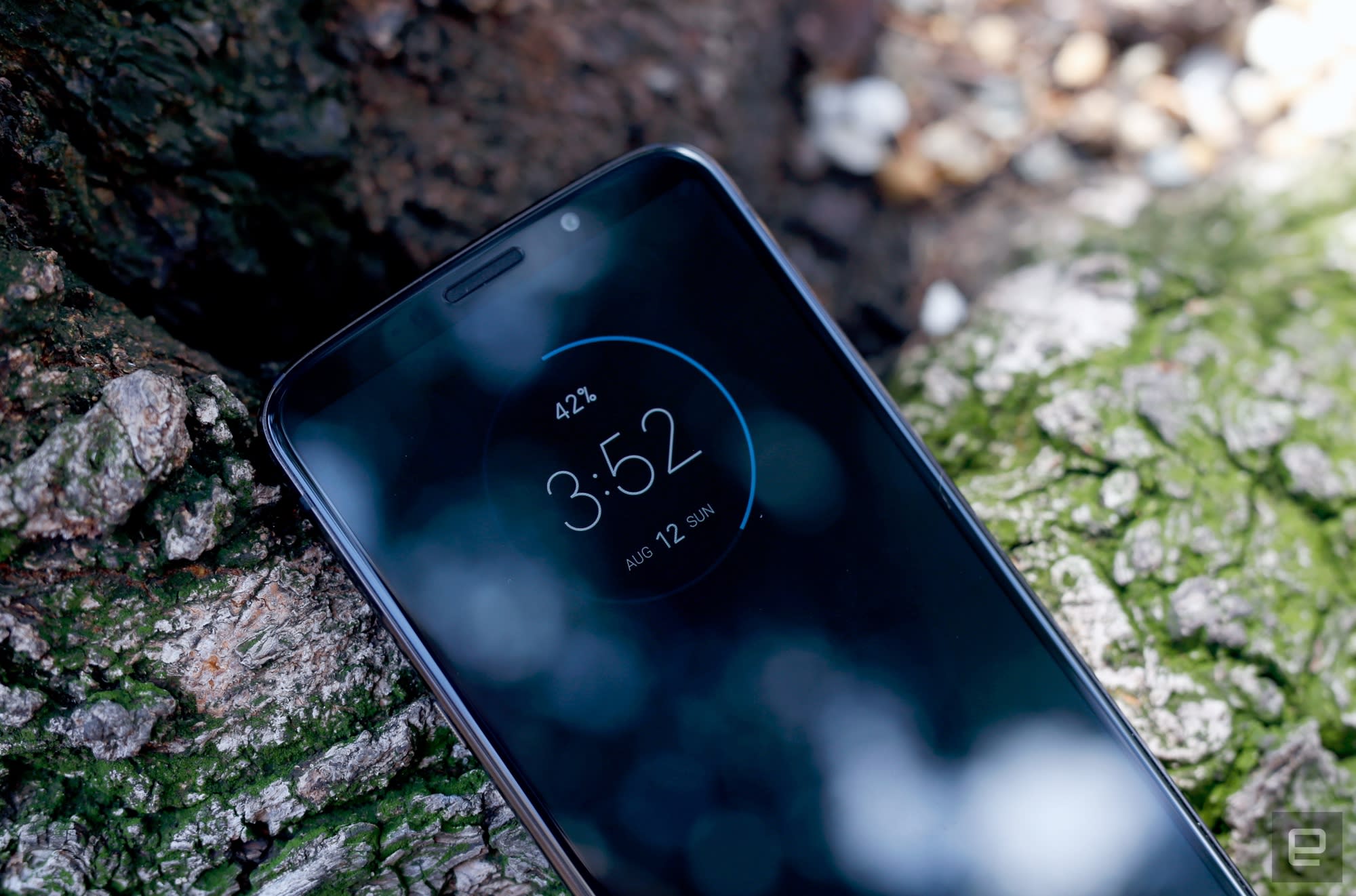 For better or worse, all of Motorola's biggest changes were to the phone's exterior. Inside the Z3 is last year's Qualcomm Snapdragon 835 chipset, paired with 4GB of RAM and 64GB of internal storage. That's exactly the same as in the US version of the Moto Z2 Force. Sadly, this is as close as we'll get to a proper flagship Z phone this year, but there's no question that the Snapdragon 835 still has a lot of life left in it.

I've been using the phone as my daily driver this past week, and it's still more than enough for multitasking, running two apps in split-screen and playing a few rounds in PUBG Mobile. The Z3 won't handle some tasks, like high-end gaming, as well as a device with a newer, more efficient Snapdragon 845 chipset, but most people won't notice the difference. A lot of things about this phone are lackluster, but its performance isn't. 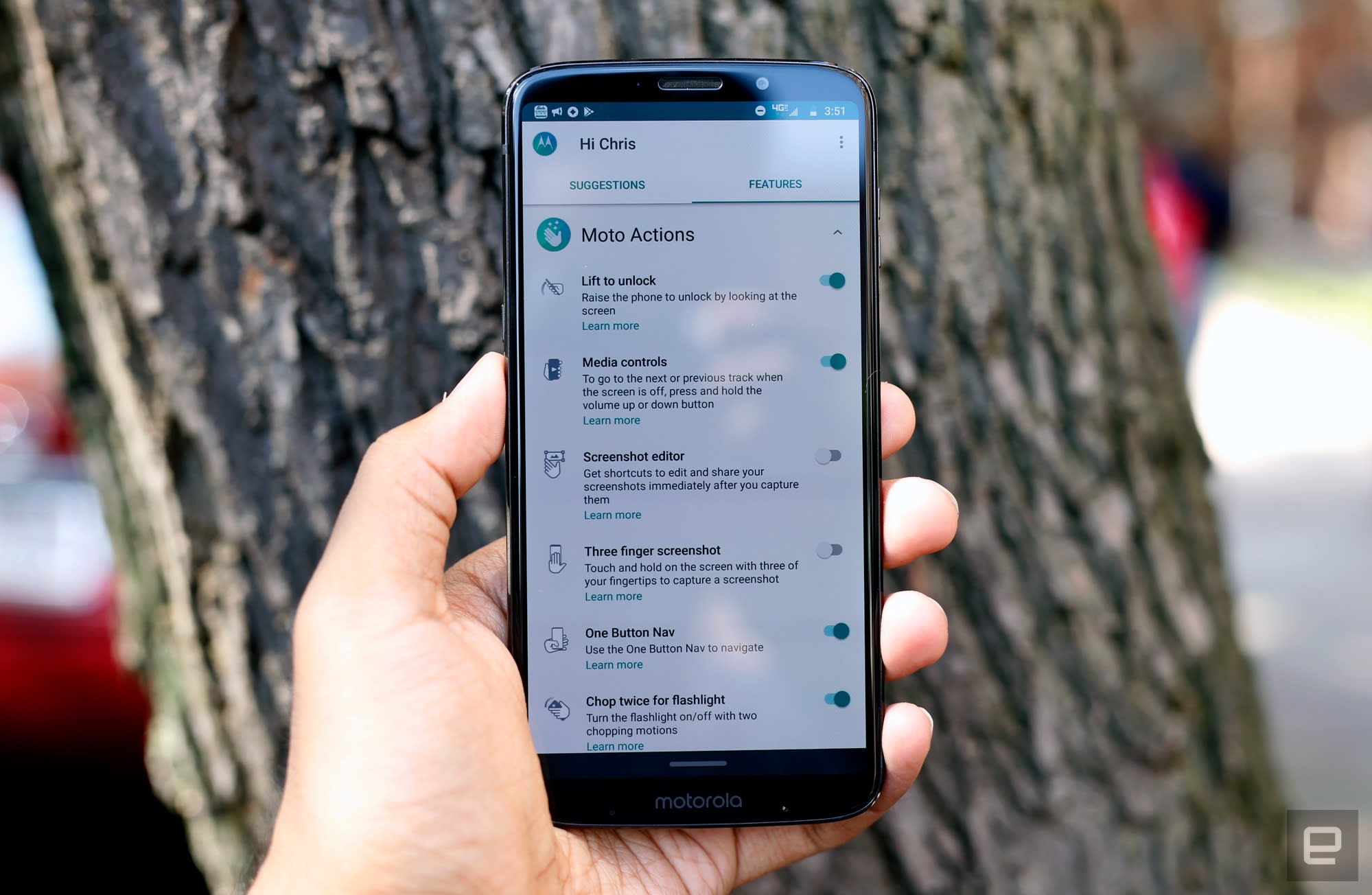 It helps that Motorola continues to get its software right. The company's chosen interface never skews too far away from stock Android -- 8.1 Oreo, in this case -- and all of Motorola's built-in Moto Actions continue to feel like worthy additions. The company's take on gesture navigation, for instance, is a notable improvement over the way Android 9.0 Pie's gestures normally work. Other additions are surprisingly invaluable, like a new feature that lets you skip between tracks in your media player of choice by holding down the volume keys while the screen is off.

And, as always, there are a few fun ones -- maybe this is a "me" thing, but I'll never get tired of karate-chopping the air when I need to turn on the flashlight. Motorola's approach has always been about adding small, thoughtful flourishes to stock Android, and that's still what it does best. It's just too bad that Verizon filled the Z3 Play with apps that no one ever asked for -- by my count, there are at least 14 non-stock apps preloaded here, and I couldn't uninstall or disable them fast enough. 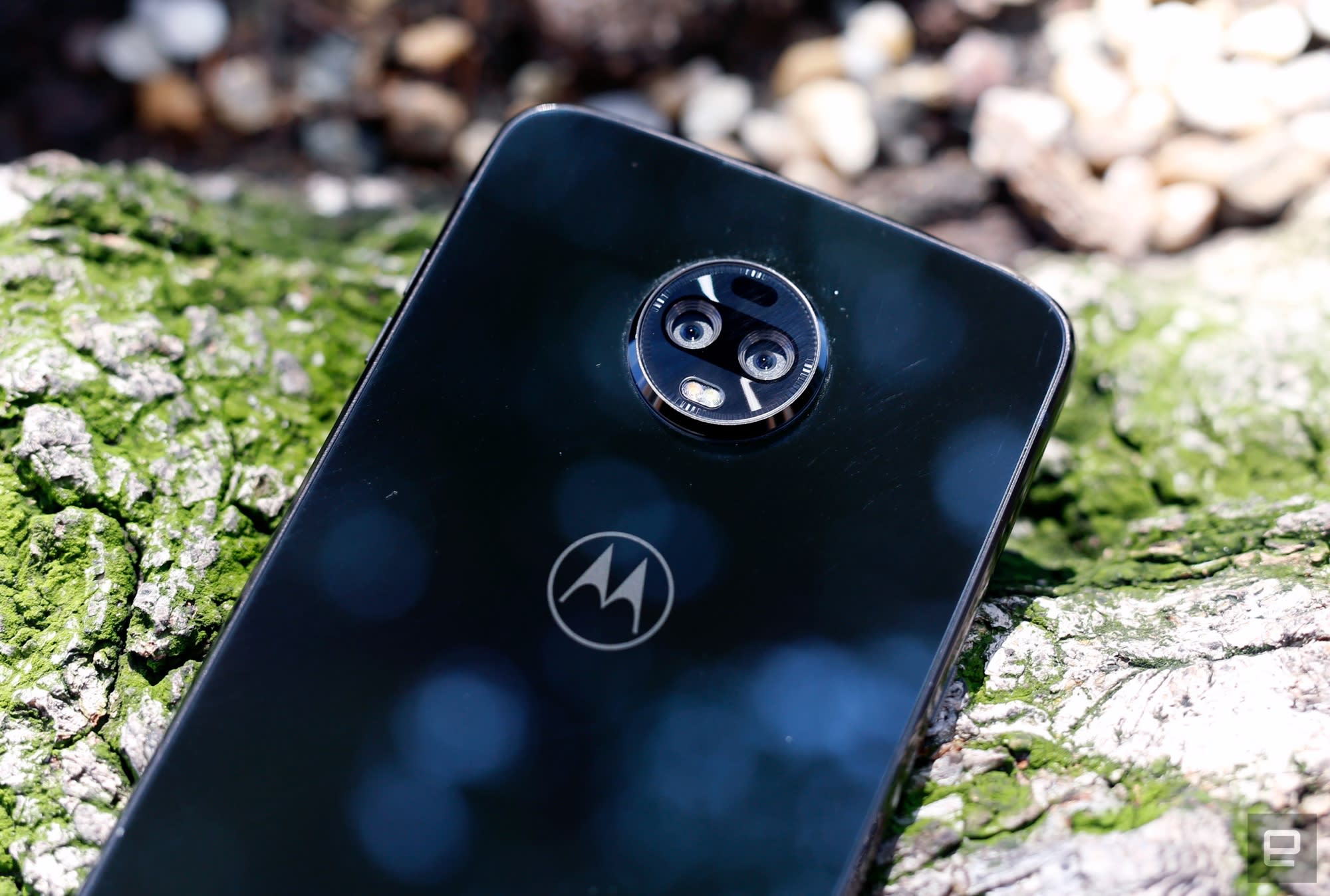 The Z3's dual camera isn't half bad, either. This time, Motorola went with a 12-megapixel monochrome sensor and a 12-megapixel RGB sensor. All told, it's a big step up from the limited dual-camera setup we got in the lower-end Moto Z3 Play. In most well-lit situations, it takes respectable photos, with just a few caveats. It occasionally struggles to expose scenes correctly, leading to slightly blown-out pictures. And because of the way the phone handles image processing, you might notice fewer fine details in Z3 photos than you would in shots taken with competing cameras.

As you might expect, the Z3 struggles in low light, but it's not as if any of us were expecting miracles here -- my test photos were on the underwhelming side of adequate. In general, though, the camera's overall speed and options like portrait and true black-and-white shooting modes make the Z3 a respectable option.

I just wish the Z3 had a better battery. There's a 3,000mAh cell inside, and at best, I've been able to use it for one full working day before needing to charge it again. With less consistent use, the phone will sometimes -- sometimes! -- squeak by until I wake up the next morning, but I wouldn't count on that. To Motorola's credit, the included TurboCharger got the phone to about 50 percent in a little over 30 minutes, so you won't need to worry about the phone running dry if you only have a few moments near a power outlet. While a bigger battery would've been helpful, I'm not naive: Motorola had no incentive to make sure the Z3 had great battery life because it wants you to go out and buy a battery Mod for it. The coming of 5G

Motorola recently told me that Moto Mods will remain part of its hardware plans for the foreseeable future, and the Moto Z3 is uniquely positioned to benefit from what might be the most ambitious Mod of all: an external 5G radio. It is, as Verizon and Motorola have proclaimed, the first "5G upgradeable" phone. The idea of giving an existing phone the ability to tap into superfast 5G data networks is a fascinating one, and I'm told the second LTE modem inside should eventually bring improved data speeds to older Moto Z phones as well. Great.

Here's the rub, though: We don't know how much the Mod will cost when it launches, or even when it'll happen -- all the companies involved would say is that it's coming in "early 2019." And a conversation in Chicago with Nicola Palmer, Verizon's head of wireless networks, proved similarly unenlightening: She wouldn't confirm which of the carrier's 5G test cities would be the first to go live with mobile 5G service.

In the meantime, we know that a handful of companies have embraced the very same Qualcomm X50 modem that 5G Mod uses and that carriers around the world are preparing to light up 5G networks next year. For all its compromises, the Moto Z3 may well be the first easily accessible device that benefits from 5G, but that next-gen network will be live in only a handful of markets in the US to start. In other words, the best thing about this device won't be of use to most Z3 owners for quite some time.

Were the Moto Z3 more widely available, it would be a pretty bad deal. As I've already mentioned, devices like the OnePlus 6 ($529-plus) pack faster processors, more RAM, bigger screens and better cameras. Since the Moto Z3 is available only to Verizon customers, though, the stable of competitors -- especially at that price -- is limited. That said, carrier installment plans without big upfront costs take some of the sting out of buying better phones. A fairly recent promotion made Samsung's Galaxy S9 and S9 Plus, two proper 2018 flagships, only marginally more expensive than the $480 Moto Z3. Then again, if you're enamored with the idea of adding features to your phone -- and don't mind the idea of plunking cash into Moto's Mod ecosystem -- you won't find a better modular phone than this. 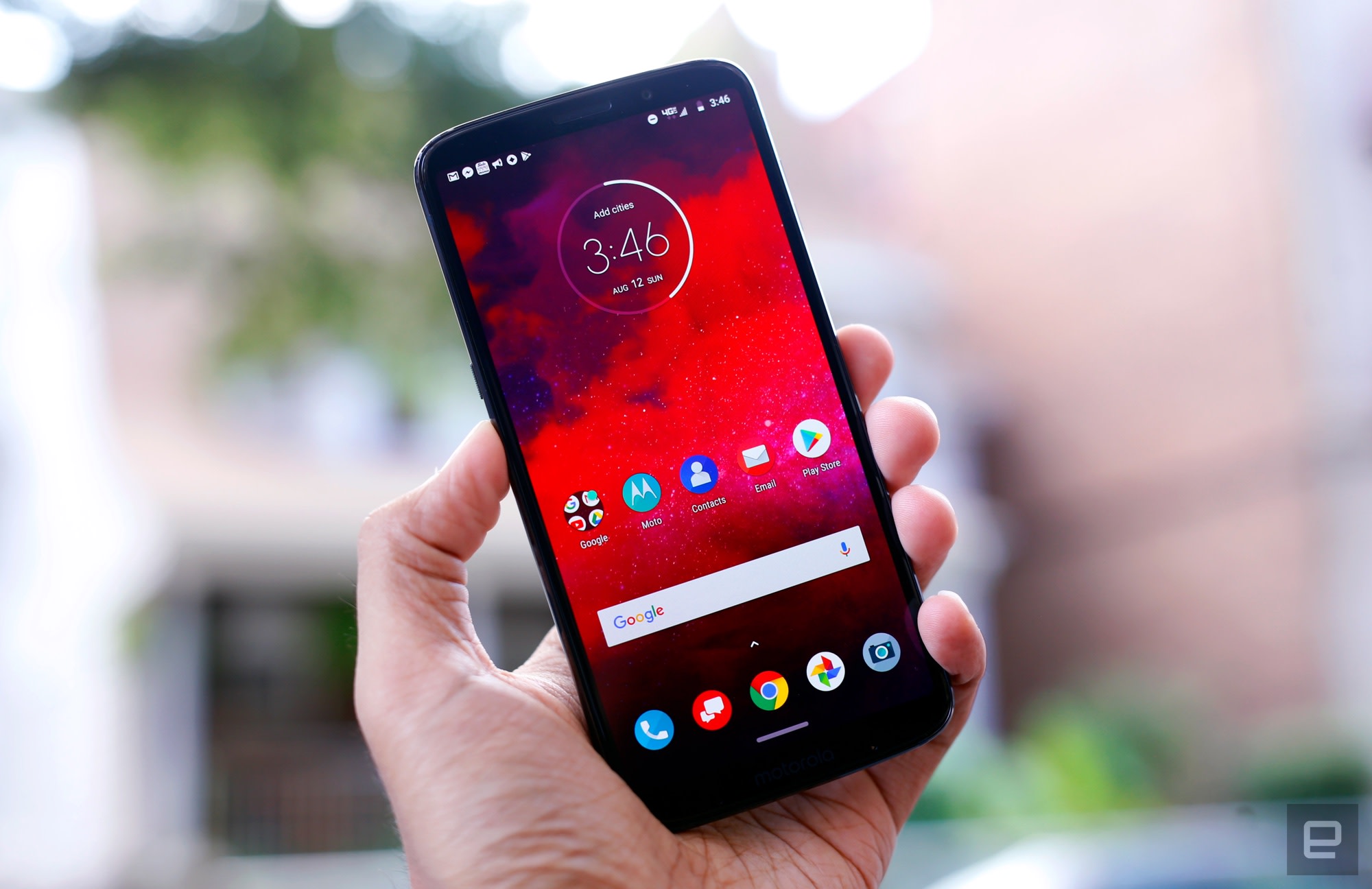 Motorola plotted an ambitious course with its past Moto Z phones, but the Moto Z3 doesn't aspire to nearly as much. To be clear, this is not a bad phone -- it runs well, comes with lovely software (save for the Verizon bloat) and has a nice screen. It's just that this an uninspired phone, one that almost feels like it was built to fulfill some contractual obligation. If you're a Verizon customer who needs 5G as soon as possible, or if you'd rather not pay a little more in monthly installments for a much better phone, then sure: The Moto Z3 might work for you. Otherwise, devices like the OnePlus 6 are proof that better standalone phones are possible for nearly the same price -- Motorola just didn't want to make one.

All products recommended by Engadget are selected by our editorial team, independent of our parent company. Some of our stories include affiliate links. If you buy something through one of these links, we may earn an affiliate commission. All prices are correct at the time of publishing.
View All Comments
Moto Z3 review: When novel ideas get old