Acer ConceptD 9 laptop hands-on: A bombastic attempt to stand out

It's powerful, eye-catching, but not elegant.

Acer has been busy. It unveiled a whole new brand of computers at its global press conference today, showing off not just a trio of laptops and a pair of desktops, but three monitors and a new VR headset as well. That's in addition to the slew of gaming laptops and displays it also launched here. The new series, called ConceptD, is the result of a collaboration with IF Design and focuses on four principles: accurate color reproduction, powerful performance, silent fans and attractive design.

The company showed off three new ConceptD notebooks, which it's also calling "creator laptops" -- the ConceptD 9, ConceptD 7 and ConceptD 5. The names are confusing to me, since they don't actually reference the size of the machines or really mean anything at all. Of the trio, the 17.3-inch 9 is the most eye-catching. It has an "Ezel Aero hinge" so you can pull the screen closer to you over the keyboard. Acer's used this mechanism before, but it's still an unusual feature and nice to see.

For a device that's the result of a partnership with a design agency, the ConceptD 9 doesn't actually look pretty. It's clunky, and I could fit two and a half fingers in the display's thick bezels. The hinge that holds up the screen is also unwieldy, and overall the ConceptD 9 isn't attractive -- just odd-looking.

The good news is, the other two notebooks in the ConceptD family are significantly prettier. The ConceptD 5, in particular, is the thinnest and lightest of the trio and its sharp profile and white finish lend it a modern aesthetic. The ConceptD 7 doesn't look shabby either, with the same matte white finish and cut-off corners giving it a unique hexagonal shape. Both these laptops have 15.4-inch UHD matte screens were so vibrant they looked like they had the Windows wallpaper directly painted onto their panels.

All three ConceptD laptops are Pantone validated, support 100 percent of the Adobe RGB color gamut and have DetalE color accuracy ratings of less than two. In the ConceptD 9's case, the DeltaE number is actually less than one (numbers closer to zero are better). What this means is that these displays are capable of reproducing a large variety of colors and do so accurately, which is ideal for graphic designers and photo editors who need their work to look realistic. I did find the ConceptD 9's screen vibrant and colorful, but even at maximum brightness, the 400-nit panel was hard to see under the harsh lights at the demo area.

I did enjoy sketching some graffiti-esque scrawls on the ConceptD 9 with its companion Wacom EMR Pen -- the stylus was responsive and I easily dragged it across the screen for meandering lines and light shading. None of my testing during our hands-on was taxing enough to even strain the ConceptD 9's ninth-generation Intel Core i7 CPU, but for the light browsing and drawing I did, the machine ran smoothly. You can configure it with up to a ninth-gen Intel Core i9 CPU and an NVIDIA GeForce RTX 2080 card, which should make for extremely powerful performance.

The ConceptD 7 is based on NVIDIA's Max-Q design and can go up to a GeForce RTX 2060 card, while the ConceptD 5 only offers AMD Radeon RX Vega M GL for graphics. The latter also only goes up to an Intel eighth-generation Core i7 CPU, so don't expect as much muscle in that thin and light rig. 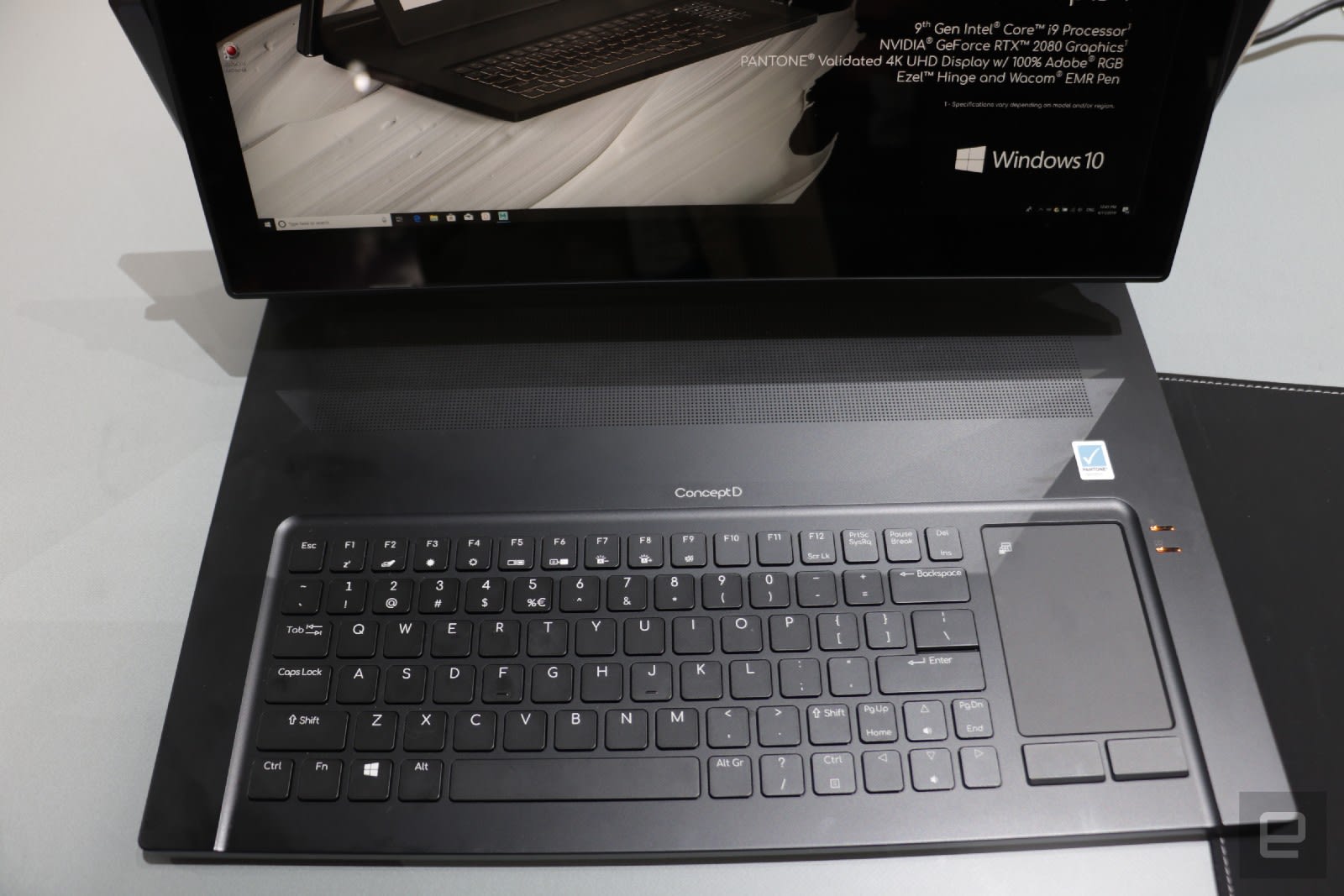 I was perplexed by the ConceptD 9's keyboard and trackpad. The keys had decent travel but they had a strange squishy response that made them feel sticky. The trackpad, meanwhile, didn't recognize any of my two-finger gestures when I tried to pinch and zoom on a sketch. I was also slightly disoriented by the fact that the trackpad was to the right of the keyboard where a numpad would typically lie. My fingers frequently wandered below the spacebar where I normally expect a trackpad to be. This placement issue is something I expect is easy enough to get used to over time, but the keys and lack of multi-finger gesture support is more disturbing. A nearby Acer rep told me that the units we were testing were early samples, so hopefully this is something that gets fixed before the laptops go on sale.

The ConceptD 5 and 7 will be available later this month, starting at $1,699 and $2,299 respectively, while the ConceptD 9 will cost from $4,999 when it goes on sale in June. As expected, these aren't cheap rigs, but it's encouraging to see a company try to make super powerful laptops that look attractive. ConceptD is a promising effort, but until we can test these laptops I can't tell if Acer's play for cash-rich creators will be successful. For now, I can only shake my head in frustration at the confusing names.